New Talk in New Delhi: No Sex, No Condom 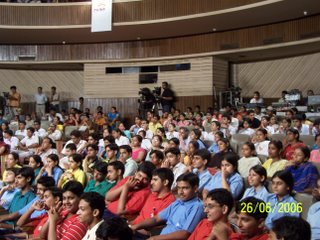 The Children were Smart and Knowledgeable in Sex Awareness

THE OTHER day we went to the Shri Ram Center for Performing Arts at Safdar Hashmi Road near Connaught Place. The hall was brimming with school children and we were fortunate to find two vacant seats out of a total of 403. Kenny G was playing his saxophone in the auditorium while everyone waited for the Mr. Minister to arrive and the live quiz show to begin.

Organized by the Indian Government, the programme took place under the initiative YUVA (Youth Unite for Victory on AIDS). YUVA is also a Hindi word meaning ‘youth.’ The event’s purpose was to test the knowledge of India’s young generation about sexual health and HIV/AIDS. This South Asian giant has over five million people infected with AIDS – second highest rate in world.

We employed the interval by flipping through the catalogues placed on each seat. It was dreary to glance through statistics and facts regarding the AIDS scare in India, but it raised our self-opinion — how noble it was for us to come and sacrifice our time to sit through such a boring and worthy cause. The programme schedule indicated that the quiz, which would follow the Minister’s speech, would be hosted by Mr. Siddhartha Basu, the celebrity quiz master, the producer of South Asia’s biggest TV game show – Kaun Bangea Crorepati – the Indian adaptation of Who Wants to be a Millionaire.

The Minister was delayed in his arrival, but he refused to spare us the ordeal of listening to his introductory speech. Speaking in a broken, upper-class Hindi, he threateningly warned that truck drivers were no longer the only carriers of AIDS. Blinded by a flash of spontaneous wisdom, he declared the great Indian culture and its no-sex values were the best safeguard against this epidemic. After a bit of words on a “very handsome, well-built boy” who was jettisoned by his family after he tested positive for HIV and whom he found loitering outside his residence, Mr. Minister settled down to talk at great length about his young daughter.

Only recently completing her graduation in English literature, the minister informed us with fatherly pride, the daughter dear has already visited several countries to attend AIDS-related conferences. We were told that if the minister was too busy to attend the meets, he sent the daughter instead. It was conveyed that she had just returned from attending a conference in Geneva. Finally, Mr. Minister concluded by advising all the youngsters present to follow his daughter’s example.

Only if our father too was a minister, somebody sitting behind us sniggered. We tried to keep a straight face.

The quiz was disconcerting at the beginning. It was particularly uncomfortable with the children being asked whether a woman could become pregnant if she had intercourse during menstruation. We found it awkward to hear them answering questions on safe sex, homosexuals, and AIDS prevention methods with a straight face, nonchalant.

There were six teams of two members each sitting on the stage. The participants were extremely knowledgeable in the subject of AIDS. The girls were particularly rigorous with their information and knew that condoms were made from latex and that Pneumocystis Carini pneumonia was the disease often associated with HIV infected people. The children were also aware about the specific age-limit that the United Nations has classified as youth (15-24 years), and which body fluid has the highest concentration of HIV among various body fluids (Blood). 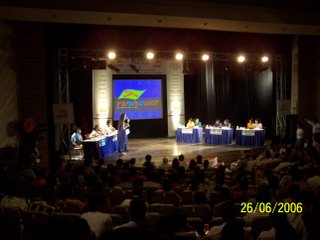 As the minutes unfolded, it was surprising to discover we were enjoying ourselves, exhorting our favorite teams to answer the questions correctly.

The students, who chiefly formed the audience, were eager and knowledgeable, and they responded smartly and intelligently to questions of the quiz master. It was a properly synchronized and excellently conducted quiz show with customary scoring and negative marking that made the hall pulsate with excitement and suspense as if we were cheering for Brazil and France in a football stadium. Even the minister smiled on occasions. We did not notice him talking on his mobile phone at any time.

When Team C was asked about the theme of World AIDS Day 2005, there was a furious discussion between the two boys. Finally they said, “No Sex, No Condoms.” The audience laughed, including us, though we did not know the answer. The question was passed to another team that comprised a pair of studious-looking girls. They answered it right: “Stop AIDS, Keep the Promise.”

During a round in which the questions were thrown to the audience, the quiz master presented a list of options to a senior bureaucrat of the Health Ministry, asking him to pick out the one which guaranteed AIDS-free sex. The choices were simple and it was easy to identify the answer. However, the rattled bureaucrat, embarrassed with all the sex-condoms talk of the kids, nervously decided on the option ‘Using Condoms Occasionally.’ Amidst a fresh wave of laughter in the auditorium, we shuddered at the low awareness of policy-makers entrusted to devise plans for India’s struggle with AIDS.

On a more personal level, there was an interesting visual question in which the people were shown the picture of a handsome Hollywood star. We were asked to name this ‘AIDS activist.’ Many hands were raised, including ours. The quiz master approached us and we answered, “Richard Gere.” We were right and one of the saree-clad hostesses following Mr. Basu gave us a tee shirt printed with an AIDS message (Yuva Pooche Mann Ki Baat) as a prize.

The quiz was coming to an end after an hour of severe emotional turbulence. The all-girls Team F, which was in a neck-to-neck race with the similarly-sexed Team D, performed brilliantly in the crucial last round (Final Countdown) and went on to win the first position. We all clapped.

The Minister was back at the podium. He had some kind words for Team B that came last (they looked as if they would burst into tears at any moment) before triumphantly declaring that the girls in the winning team would accompany him to an AIDS conference in China scheduled for the next month. All of us clapped again.

Later emerging out of the auditorium, we were concerned for the Minister’s activist-daughter. After assuring ourselves of the probability that perhaps she could still be accommodated in the China delegation, we busied ourselves in bargaining with a thuk-thuk walla to drive us to Khan Market.

Contact mayankaustensoofi@gmail.com for ad enquiries.
← A French Man Photographs India Gate and Reflects on the Charms of Delhi
Books, Boobs and Breathing in New & Old Delhi →