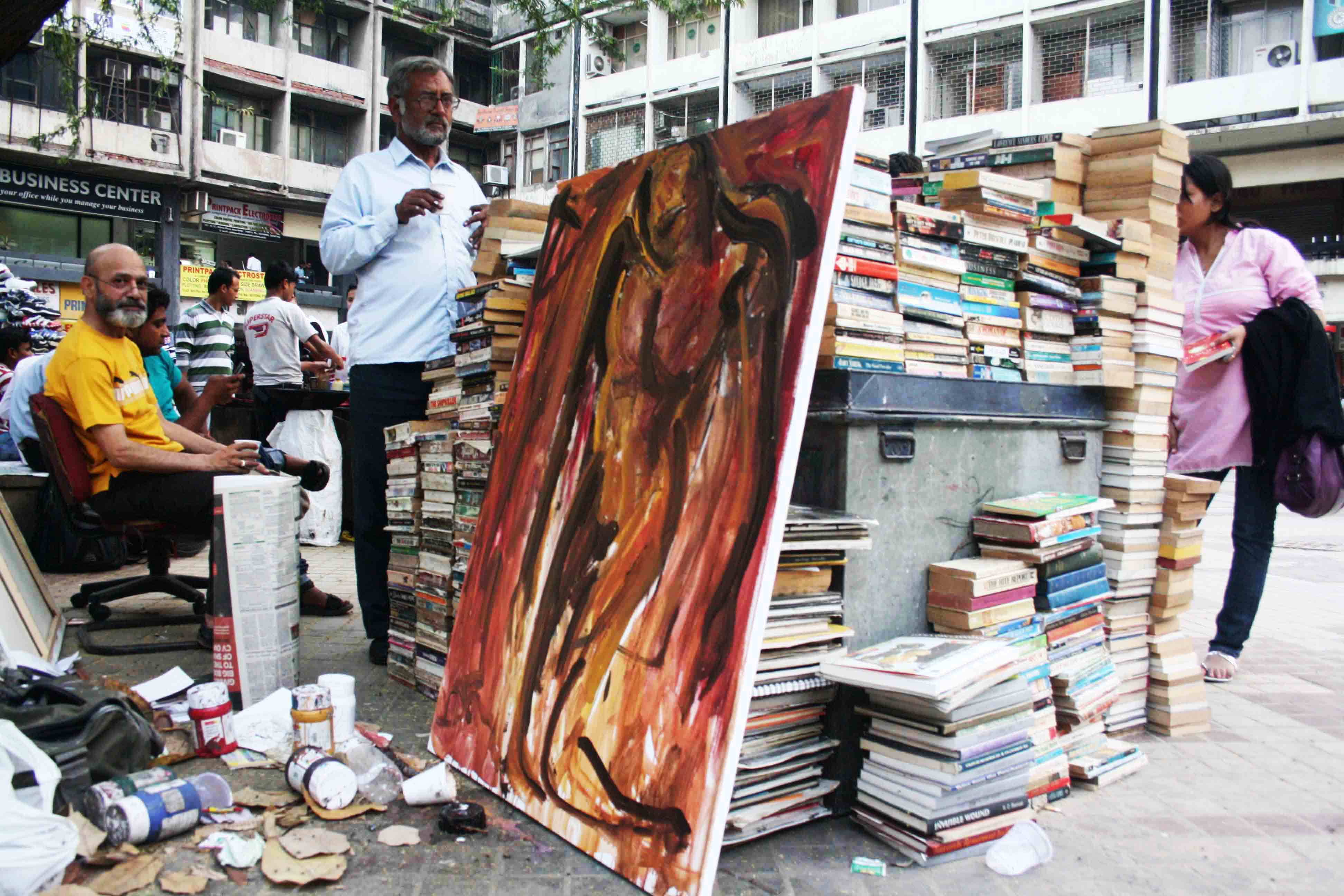 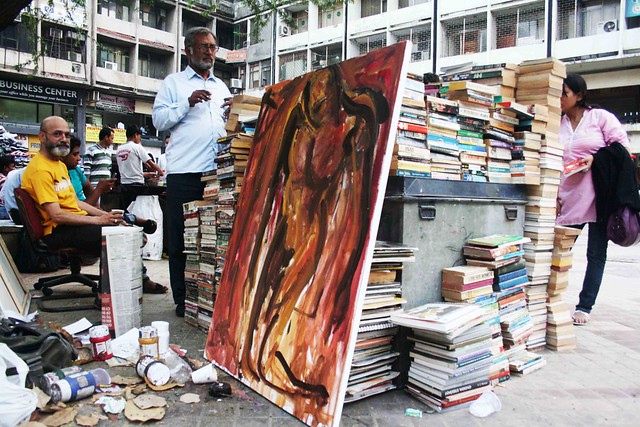 Sitting beside his secondhand books, Karim Khan, 52, lights up a Goldflake. The surrounding office skyscrapers of Nehru Place are looking like sleepy giants in the evening’s gathering darkness.

The Delhi Walla is meeting Mr Khan after two years. I would come to this commercial complex, famous for its computer hardware workshops, to buy books from his stall.

“I’m no longer only a bookseller,” says Mr Khan curtly.

The bookseller, who would draw charcoal sketches of people on the pages of his musty-smelling books, has become an established painter. The man who once found it difficult to pay his chaiwalla now price his paintings between 30,000 and 1.5 lakh rupees. Mr Khan has moved up in life. “I think we all move… forward, sideways. I must not get boring. I must experience different things in life. I must show my age and experiences in my paintings. I must draw the journey that took me to become what I became.”

But where is the Mr Khan I knew? That man who was not so polite. Talking to the painter, I miss the bookseller. Every evening I came to Nehru Place to check out the new stock at his stall. One evening I found a book on the origins of Jazz music. Another day I got a catalogue of the Prado museum. Every day we would quarrel like fishwives over money as little as 5 rupees. Mr Khan called me names. I abused him back. Once he accused me of not paying the full amount of a rare set of Time-Life cookbooks. He would set goons on me, he promised.

Two years have passed since that incident. This evening, we are talking like civilised people. Mr Khan says I wear better clothes. I note that Mr Khan has started trimming his beard. His shirt looks ironed. “You have to be compatible with the changing circumstances. Now I’m invited to parties. I have to look clean.”

A native of Silchar, Assam, Mr Khan was a college dropout who came to Delhi in 1989 “to find out what art is all about.” He ended up selling old books in Nehru Place. During the day, he would halfheartedly hard-sell best-selling novelists such as Dan Brown and Chetan Bhagat to the area’s software professionals. Bless the man who came asking for directions. Mr Khan would destroy his self-esteem by throwing one acidic glare. Often, he was seen drawing portraits of shoppers. Sometimes beautiful women would spend hours in his company. In evenings, Mr Khan had his durbar of painters and booklovers who would talk on life, sex and Tolstoy. I was never admitted to the coterie. “Because you were so silent.”

In 2008, Mahesh Bansal, a businessman who has a sanitary showroom in suburban Noida, came to Nehru Place, spotted Mr Khan, liked his way of talking and started visiting him daily. “I would find him making these wonderful sketches but he would throw them away and stray dogs would pee on them. I had this empty commercial space in Noida and I decided to turn it into a gallery to showcase his work,” Mr Bansal told me on phone.

In 2010, introducing his first solo exhibition, ‘Beyond the Obvious’, critic Alka Rahguvanshi wrote, “A deep melancholy hangs over Khan’s works. Like fine mist it envelops them in an invisible net that draws the onlooker into its lair like a gossamer web, almost forcing them to linger. The metaphors are urban, the inspirational mainstay emerging from imagery that is almost European in style and content.”

As offices starts shutting off their lights, Mr Khan invites me to his friend’s place in Gautam Nagar, south Delhi. Our auto rickshaw breaks down in Uday Park. We walk to a Punjabi eatery. Over dal makhani and butter naan, I recall my past evenings with Mr Khan when he would chat non-stop on Manet and Chekov. Sometimes I found him very profound and well-read, sometimes I wondered if it was just a superficial understanding of art and literature.

“Will you move to Europe?” I ask him.

“No, I’m a hardcore Delhiite.”

Waiting for more naans, Mr Khan suddenly starts on a Russian novelist. “If you read Dostoyevsky, you feel you are looking at modern art. His novels are not very straight. Freud went into psychoanalysis after reading Dostoyevsky.”

After our meal, Mr Khan is to return to his studio and paint. In the morning, he will take the auto rickshaw to Nehru Place and sell books. “People come to me when they need novels with strange-sounding titles. They have all sorts of faces. And since I’m into figurative art, I draw their portraits on the back of my books with my charcoal pen.”

It is true Mr Khan has changed somewhat; yet not much.

[This is the 20th portrait of the Mission Delhi project] 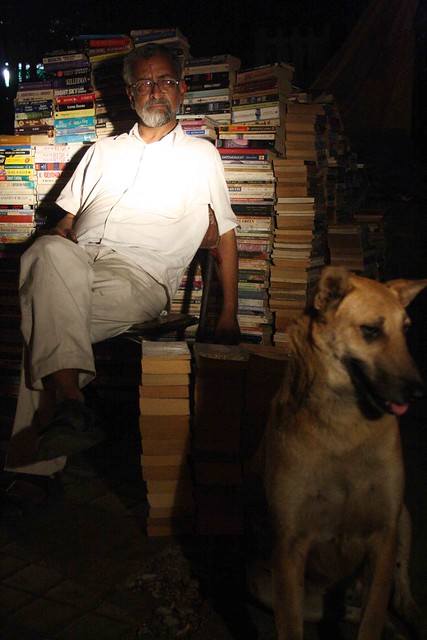 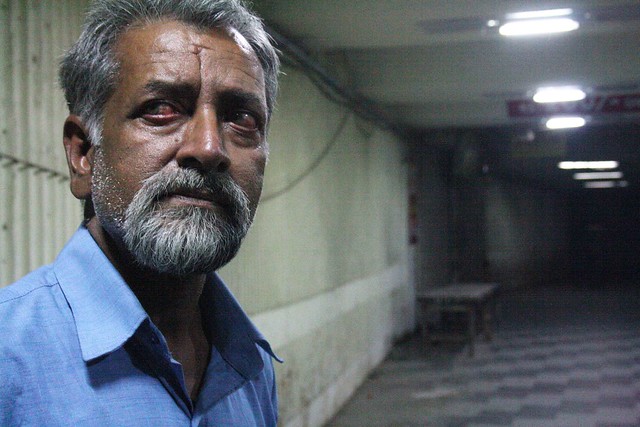 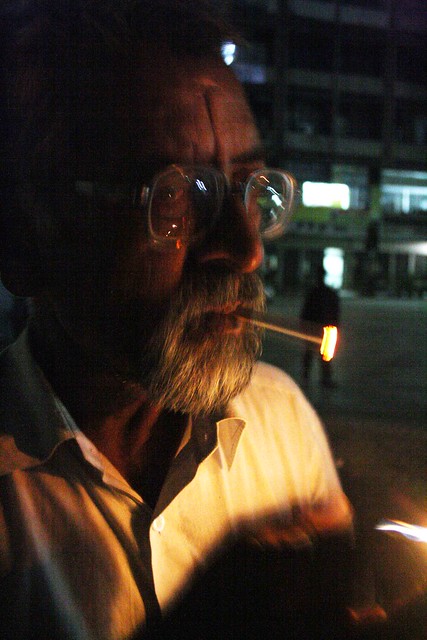 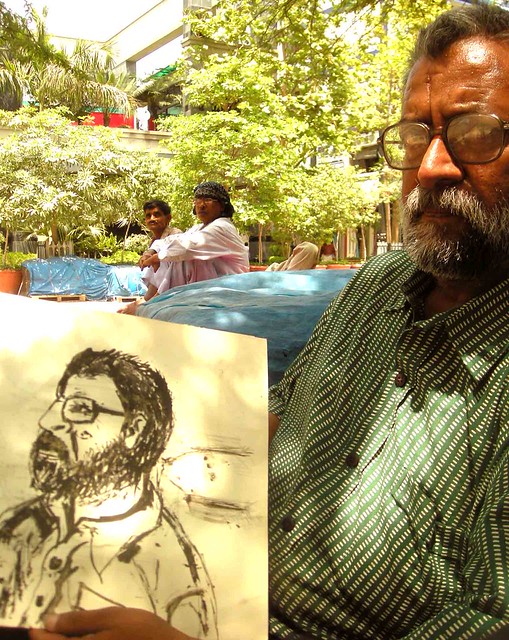 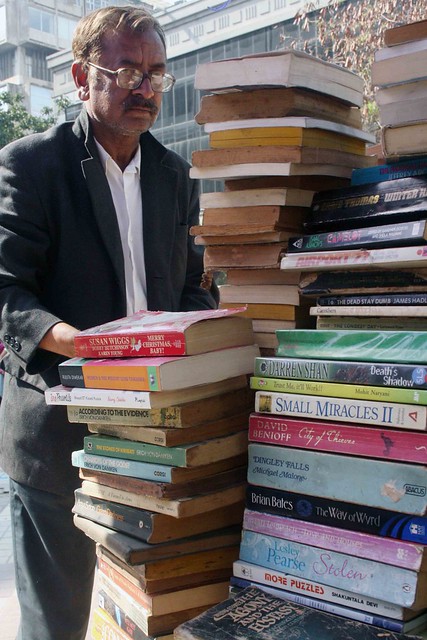 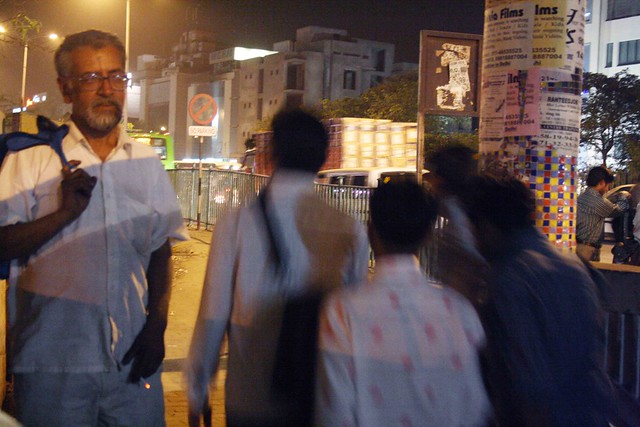 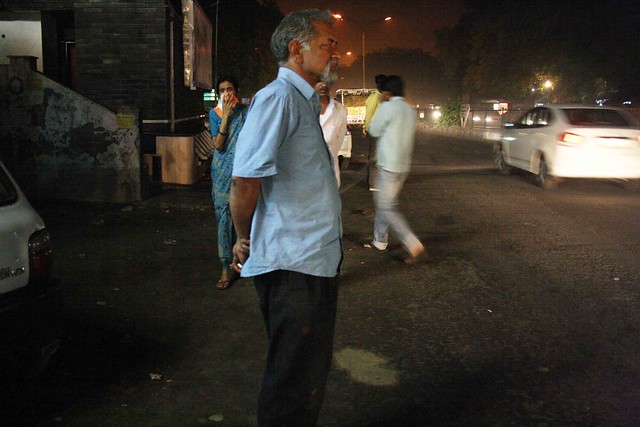