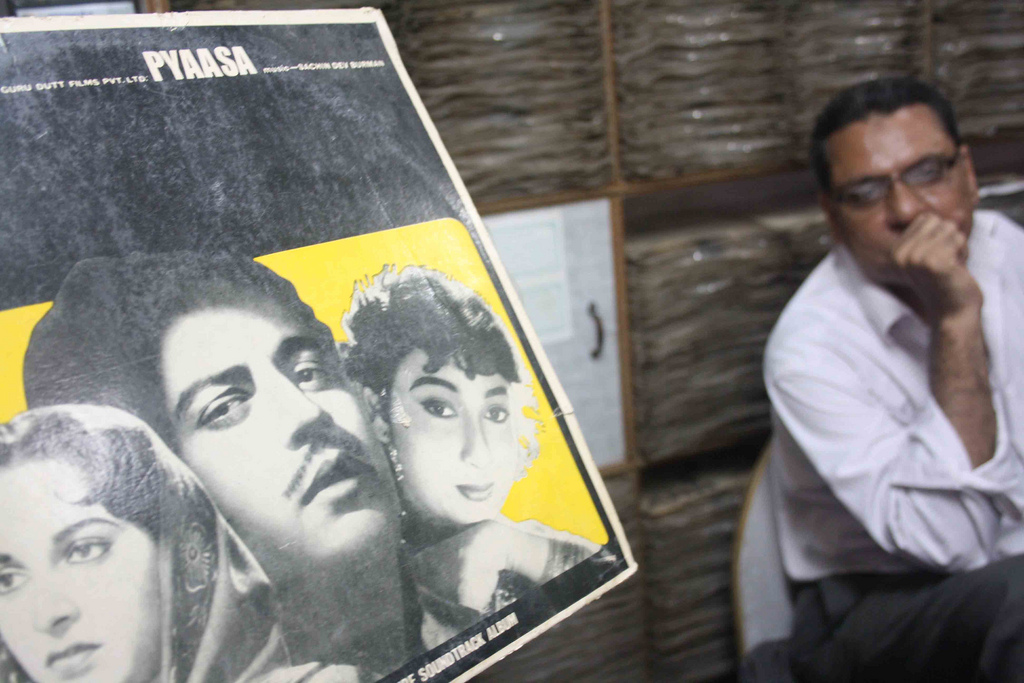 Overshadowed by Old Delhi’s Jama Masjid, amidst scampering goats and the air redolent with the smell of milky chai and mutton curry, stands a nondescript shop. The unimpressive exterior belies the uniqueness of this establishment that boasts of more than 50,000 music records.

“My place attracts collectors, not customers,” he says. Only a true collector can wade through the narrow lanes of Meena Bazaar—lined with shacks selling mostly machine tools—where the midday chaos resembles an ant colony under fire.

With the help of his son Zafar, Shah runs the 80-year-old Shah Music Centre. One could while away an entire day flipping through the music albums in this treasure trove, pausing to look at Dimple Kapadia’s plump arms on the cover of 1973 hit Bobby, or admiring the portrait of young Pandit Ravi Shankar on the 1967 album, Transmigration Macabre, or frowning at a frowning Prithviraj Kapoor (1960 Mughal-E-Azam).

The ‘Long Play’ records that stored around 20 minutes of music, before needing to be turned over, have long since given way to CDs, MP3s and now to iPod playlists. The shop lives on through the patronage of music lovers and album cover aficionados, who come from all over India and abroad to take a look. The first-time visitors often ask Shah whether the records actually work, to which he happily plays the discs on any of his old hand-winding gramophones. Reflecting the collection’s eclectic character, the large-horned gramophone is as likely to play Tansen’s Deepak Ragaas as Tchaikovsky’s 1812 Overture.

While the treasure trove was accumulated through years of dedication by his father, Shah exercises the same missionary spirit and attitude. His agents in cities such as Kolkata, Kanpur and Allahabad keep an eye on crumbling bungalows whose owners occasionally give away their vinyl inheritance to raddiwalas. Equally active in overseas takeovers, he claims to use connections in London to get hold of the extremely limited copies of the 2004 film Veer Zaara—possibly among the last gramophone records manufactured in India. You are free to gawk at the rare three-record set, but it is not on sale.

Some of these countless film songs, ghazals, qawwalis, ragas, and even Telugu, Tamil and Malayalam movie numbers are so rare they cannot even be found in the libraries of music companies. I half expectantly asked for Devika Rani’s 1933 film Karma and, like a magician, Shah produced it from a back shelf. (Unfortunately, the album cover did not sport her legendary kiss.) Apart from a Hindustani and western classical collection, there are delights for those who seek pleasure in Michael Jackson, Abba and Frank Sinatra.

Though buying records here is cheaper than say, in the street fairs and flea markets of Manhattan’s West Village and Chelsea, do not allow yourself to be fleeced. Shah is as cunning as Shylock. Exercise restraint if your first impulse upon spotting A Star is Born (a topless Barbra Streisand hugging Kris Kristofferson) is to quickly pay and run with the album. Pretend outrage. Discuss, argue, and pester Shah until you arrive at a modest settlement. Finally, make a note of the landmarks around Shop No. 256 when you leave. You may want to come back.

But here’s another secret. Just facing Shah’s is shop no. 152 – another LP store. The man there is gentler and less media savvy. He has an equally good LP collection and sells them at a lower price. For the sake of small business and for his old-world humility, patronise him instead. Smooch from the past Remembering the old melodies (shop no. 152)