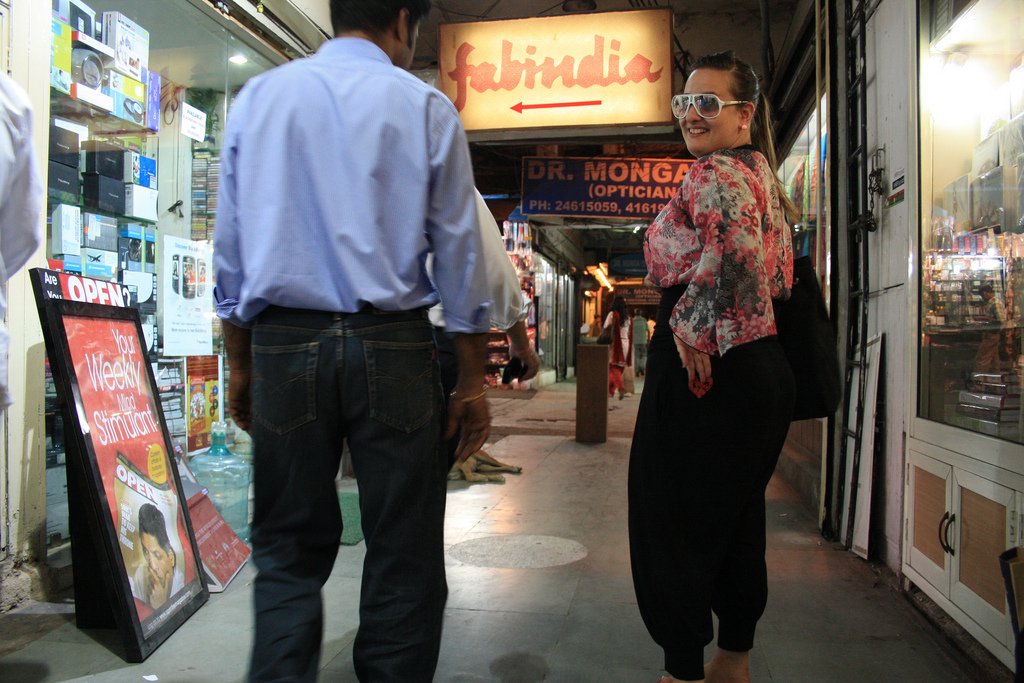 Memo from Khan Market – Will the Metro Dilute its Gene Pool? The citadel of south Delhi snobbery is about to fall. Khan Market, where the city’s rich go to see and be seen, is getting a metro station. “The Humayun Road metro stop is opening in September (2010),” says Anuj Dayal, spokesperson, Delhi Metro Rail Corporation (DMRC). Humayun Road is a two-minute walk from Khan Market.

Till now, the market which one award-winning author described to me as ‘Delhi’s steel bubble’, was reachable only in a private vehicle, or public mode of transport such as a cab, auto, or the city buses. Not the best-connected place in the Capital, there are no straight buses to Khan Market from, say, Punjabi Bagh in west Delhi. With the coming of the Metro, Khan Market will become accessible to more Delhiites. One consequence of that will be: its super-rich gene pool may dilute.

“Khan Market’s demographic will become pedestrian,” says a Khan Market regular Vaishnavi Bhagat, an interior designer. “The market will resemble a mall, where all kinds of people come from all over Delhi to ogle at girls in skirts.”

Named after the freedom fighter Khan Abdul Ghaffar Khan’s elder brother, Khan Abdul Jabbar Khan, the market, circa 1951, evolved from being a sleepy neighbourhood bazaar into an upscale shopping area, favoured by foreign diplomats from the vicinity. In its second transition, it became a hangout for the writer types. Author Khushwant Singh walked here in the evenings. Once, Colombian novelist Gabriel Garcia Marquez was spotted on the Front Lane. Bestselling novelist Chetan Bhagat, before he became a bestselling novelist, was snubbed by a Khan market bookseller.

In its current avatar, the market is a haven of fashionable cafes and high-end showrooms, and is frequented mostly by the extremely well-heeled.

“I’m happy,” says Jagdamba Prasad Badoni of JP Sweets whose samosas, priced at Rs 5 each, are perhaps KM’s only cheap eatables. “I sell 300 samosas daily. With the metro, it should go up to 400.”

Enjoying a glass of iced peach tea in the Middle Lane’s Café Turtle, Qurratulain Rizwi, an accessory design student in National Institute of Fashion Technology, says, “The Metro will make Khan a less-segregated place.” Her classmate Kavita Aggarwal agrees. “The latest infrastructure will affect only the elite,” Ms Aggarwal says. “We, cash-starved students come here for Big Chill’s cakes and Khan Chacha’s kebabs. Now, we’ll not have to spend a fortune in autos.”

I then called Gopa Majumdar, associate professor of sociology in Lady Sri Ram College, who is also a regular to the market. “The change and development of city landmarks are a normal part of growth,” she says. “Khan Market is attracting three times the larger clientele than it did 30 years ago. The Metro will make it a better place.”

IT Professional Sumanta Roy comes to Khan Market every week to buy imported cheese. “While I’m happy that travelling to Khan will become easier,” he says, “I hope that a larger spectrum of people will not dilute the high benchmark of style that the market has set for itself.”

At least a few Delhiites doubt if the place has any style. “It is one the worst maintained shopping areas in Delhi,” says Anuj, an entrepreneur. “There is absolutely nothing about Khan Market that makes it look stylish, contemporary or chic. When I visited this place for the first time, I laughed my guts out. It’s the most hyped place in Delhi.”

The shopkeepers of Khan Market are optimistic about the Metro. “Finally, we’ll get rid of the parking problems,” says Rajni Malhotra of Bahrisons Booksellers. “Since Humayun Road will be connected to the Vishwavidyalaya stop, we’ll get the university crowd.” Ms Malhotra also welcomes the market’s inevitable democratisation. “As Khan Market becomes more accessible, the chic Khan Market style will rub on to more Delhiites.”