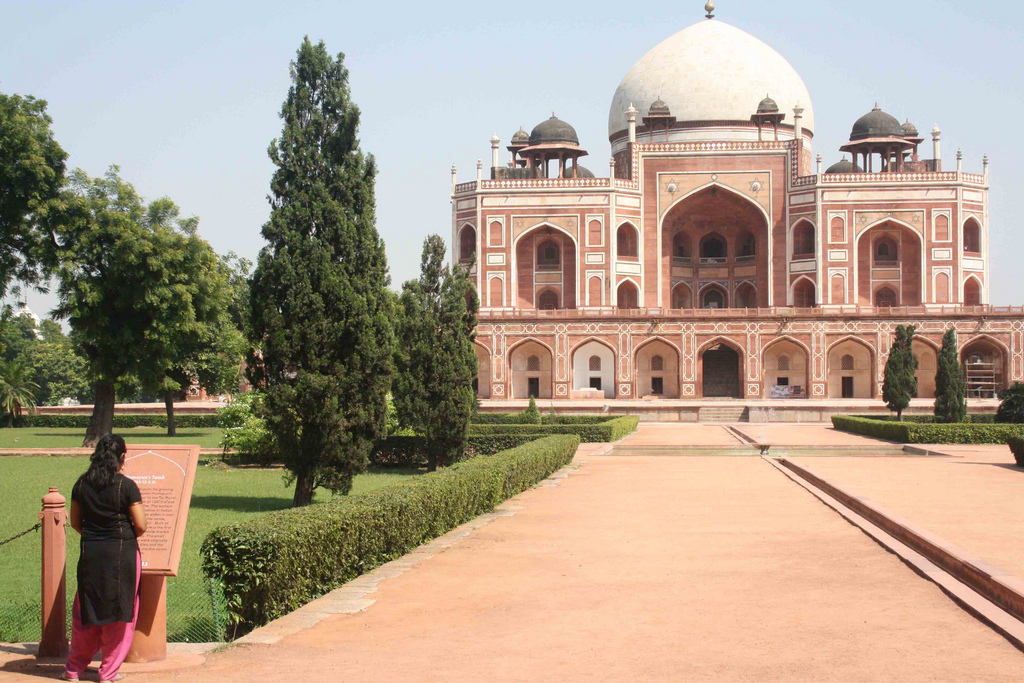 Delhi is too hard on itself.

Stop beating your chest. “Delhi is not filthy,” said Jenny Stevenson, an Australian visitor to the city. The Delhi Walla met Ms Stevenson at the ticket counter of Humayun’s Tomb on September 30, 2010. “I’m having a great time,” she said.

Ms Stevenson, 50, is the mother of Dale Stevenson, an Australian shot put athlete who will be competing in the Commonwealth Games that Delhi is hosting in October. She had come to see Humayun’s Tomb, one of Delhi’s most scenic Mughal-era monuments, with her son’s girlfriend, Lauren Jones.

It was a hot afternoon and both the women were having orange bar ice candy. A teacher in Melbourne, Ms Stevenson has been to Delhi earlier too. For Ms Jones, a student of real estate, it was her first time. Considering that the Australian Prime Minister Julia Gillard had urged Australians to exercise a high degree of caution in India, Ms Stevenson was not exactly in panic. “I’m feeling perfectly safe in your city,” she said. “We’re very glad to be here,” said Ms Jones, “Delhiites are very friendly and happy people.” Ms Stevenson said, “I love the food, especially the curries, the breads and the raita.”

One of the intentions of Delhi Commonwealth Games was to showcase India’s growing economic clout to the world, although in July, 2010, a study in Oxford University claimed that the eight states of India have more poor people than in the 26 countries of sub-Saharan Africa. To enable the city to host such a huge international event, crores of rupees were alloted to build its infrastructure. According to figures presented by Urban Development Minister S Jaipal Reddy in the parliament, Rs 28,054 crore has been spent on the Games. Rs 670 crore went to the stadiums. The rest were spent on building the city’s infrastructure: Rs 650 crore on street scraping; Rs 900 crore on bus depots; Rs 3,000 crore on the Metro rail; Rs 18,000 crore on DTC buses; Rs 3,700 crore on flyovers and bridges. An additional Rs 12,000 crore was spent in creating T3, the new terminal of Delhi’s Indira Gandhi International airport. So, is Delhi looking like a World Class City to these Australians?

While praising the airport, Ms Stevenson said, “It is important that different cities must look different. If every city looks like a Western city, then what’s the point? You better stay at home.” Ms Jones said, “There is a good balance of gardens and buildings in Delhi. Since it is a low-rise city, I feel very comfortable.”

Dismissing the talk that the Capital has become an unliveable mess due to its corruption-ridden and delayed preparations for the Commonwealth Games, Ms Stevenson said, “No, I’m not seeing dirt anywhere in the city. I’m happy with my accommodation.” Ms Jones said, “Delhi has great vibrancy. Look at the tuk tuks (auto) and the beautiful women in colourful saris.”

During the countdown to the Games, the Indian media did a largely negative coverage of the events. But then it was difficult to find good stories. Sample the list: the record-breaking monsoon rains, the dengue epidemic, the missed deadlines, the collapsed bridge at the Jawaharlal Nehru Stadium, the unclean rooms of athletes, the various scams and the disappointing anthem composed by Oscar winner AR Rahman. There was even the scare of monkeys and snakes. “I think Indians are very hard on themselves,” said Ms Stevenson. “You people should go easy,” said Ms Jones. Another tourist in Humayun’s Tomb Beat the heat with ice-candy Tourists taking in the scene The Aussies with The Delhi Walla