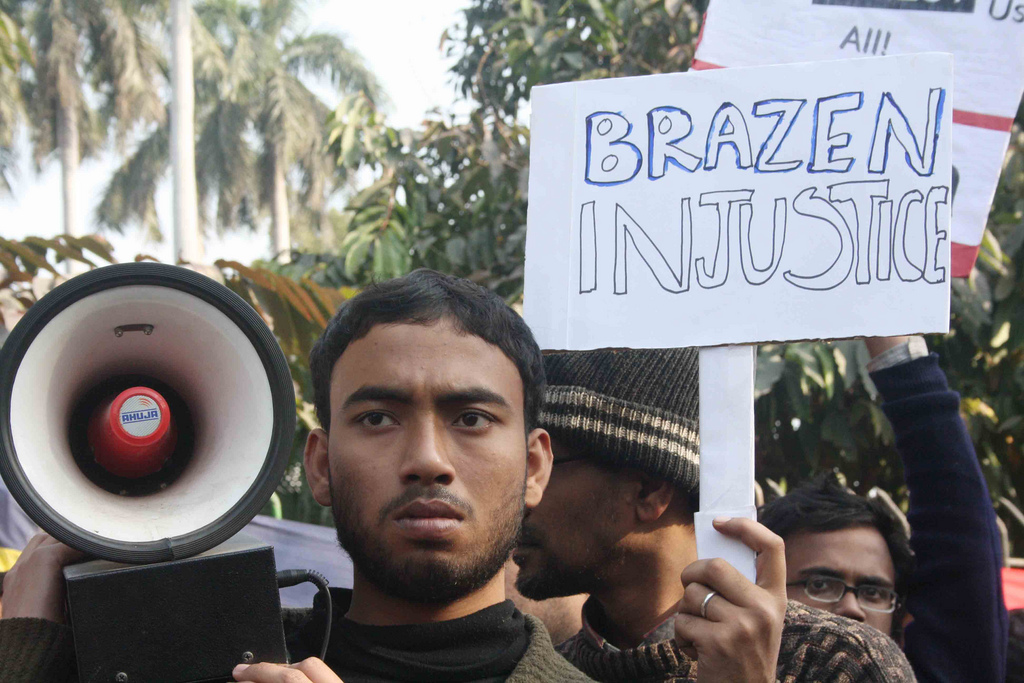 One cold afternoon, The Delhi Walla went to Jantar Mantar after receiving a chain text message the day before on the cell phone:
Join citizens’ protest against the conviction of Dr Binayak Sen at 2.30 pm on December 27, Jantar Mantar.

Famous for its 18th century solar observatories, Jantar Mantar, close to the parliament, has democratic pretensions. Indians go there to celebrate, to protest and to make their voices heard. The rulers, though, hardly care.

Accused of passing messages between Maoists, a rebel group that has declared to overthrow the Indian state, Dr Sen, the 59-year-old health worker and rights activist, was sentenced to life imprisonment by a lower court in Chattisgarh, the central province where the Maoists insurgents have a considerable influence. The doctor was held guilty of waging war against India.

This is a man who left the high life of India’s booming cities to provide health care in the interiors of Chhattisgarh, where 45 per cent of people live below the poverty line. Some parts are so underdeveloped that sick people have to walk miles to reach the nearest medical clinic. There, Dr Sen opened dispensaries and schools, and soon, he compromised his patriotic integrity by highlighting starvation deaths, dysentery epidemics, and extra judicial killings of so-called Maoist rebels by the state police.

Finally, the doctor hit below the belt. He began criticising Salwa Judum, a private militia movement armed by the Chhattisgarh government to combat the insurgents.

The doctor was with the bloodthirsty Maoists.

This is how the state thinks.

In an interview to the Delhi-based magazine Down to Earth in 2008, the doctor had said, “The rural poor have very valid grievances against the state and the Maoists tapped into these. However, I don’t condone the Naxals. I don’t approve of their violent methods. In fact, I’ve spoken strongly against them several times.”

Doctor, that’s no excuse. If you are not with the state, you are with the Maoists. You must be finished.

In 2007, the police arrested the doctor. The local court rejected his bail plea twice. The High Court too denied bail. So did the Supreme Court. The doctor was left in solitary confinement. In May 2009, the Supreme Court granted bail. In December 2010, a court in Chhatisgarh, despite shoddy evidence, convicted him with treason. The doctor was immediately jailed.

On the fourth day of this outrageous judgment, civil rights activists gathered in Jantar Mantar, chanting comradely slogans in support of Dr Sen. Some carried placards that said, “If fighting justice is sedition, than arrest us all!” One face in the crowd was that of author Arundhati Roy. Facing charges of sedition, she is in the hit list of India’s most wanted traitors. Talking to reporters, Ms Roy said, “We’ve have come here because we disagree with the court’s judgment.” She then added, “The judgement is a warning to others.” In another group, a woman, who met Dr Sen moments before his arrest, said, “When the judgment was delivered, he looked completely defeated.” Another activist said, “The upper court may repeal the decision but Dr Sen’s life has been destroyed.”

Still, the doctor is lucky. Think of thousands of ‘sympathizers’ of various other causes in India who too have been dumped into jails because of their ideologies, their fates unknown to us.

And India is the world’s biggest democracy.

The law is an ass Arundhati Roy, your turn next?