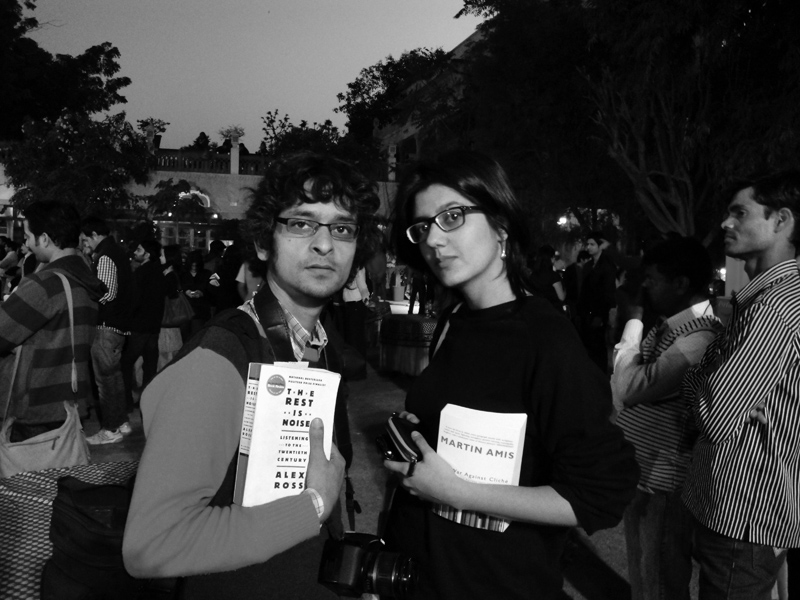 It’s not about books.

High heels, Prada bags, Charles & Keith ankle boots, Sula wine, exposed cleavages and a private jet. Lit events are the new cool for the beautiful people, if the 6th Jaipur Literature Festival is an indicator. It was the place to see and be seen at. There was music, kisses, vodka, and, yes, it didn’t harm to have Pamuk as a prop. From now on, the fashion weeks of Delhi and Mumbai will be merely for the wannabes.

What The Delhi Walla saw was a Woodstock of the internationally accented and expensively groomed. The Page 3 People, aka P3P, arrived in Diggi Palace, the festival venue, in the form of Ayesha Thapar, a Delhi socialite seen at every fashion week party, club opening night and art gallery bash. Reaching the front lawn, she exclaimed, “Oh God, all the riff-raff has come here.” Perhaps she, too, spotted Romi Chopra, Sunita Kohli and Gauri Keeling in the crowd. Maybe she meant fashion designer Poonam Bhagat, present as well. Madhu Trehan and Suhel Seth came as panelists.

A two-minute anthropologist classified the women attendees in two categories: 1) The Bag Ladies with their Pradas and Louis Vuittons, who were sending flying kisses to one another while being crushed by the weekend crowd. 2) The Indigo Sari ladies who with their grey hair, ‘sensible’ shoes, draped-on-the-arm shawls and cigarettes were scurrying from one talk to another, complaining that chairs should be reserved for people above 55.

The five-day carnival had the right literary pretensions: 223 authors from 20 countries. But keeping the focus on the blue sky and all the P3P flitting like butterflies in the literary garden, I stayed away from post-colonial-post-modern-post-everything crap. There was more happening action elsewhere: Nobel laureate Orhan Pamuk cosying up to wine-guzzling Booker prize-winning girlfriend Kiran Desai, Kashmiri author Basharat Peer networking with foreign correspondents, Pakistani novelist Ali Sethi exiting in an auto-rickshaw with an unidentified woman. Being a book lover, I should have been thrilled to breathe the air exhaled by the reclusive South African novelist JM Coetzee, standing an inch away from me. But the transcendental moment came when Delhi socialite Bina Ramani sat next to my feet – literally – at an over-crowded session in which the panelists gossiped about the sex life of Jawaharlal Nehru and Edwina Mountbatten.

The festival started on Friday, which was just the lull before the P3P storm. On Saturday, Delhi gatecrashed. It was as if Khan Market had landed in Diggi Palace. The entire place was taken over by the Capital’s bubble people, the kind who buy wrist-watches at DLF Emporio mall, brown bread in Sugar ‘n’ Spice, and books at the cocktail launches of Le Meridian. “How did you come?” asked one socialite to another in the Merrill Lynch Mughal Tent as Afghanistan ‘expert’ Rory Stewart and The New Yorker’s John Lee Anderson shared notes on ‘Reporting the Occupation’, a session presented by investment banking giant Goldman Sachs. The other socialite replied, “I came in Narula’s plane.” The DSC Group, managed by the Narulas, is the chief sponsor of the festival.

By Sunday, every snoop reporter in the festival was trying to confirm if Narula actually had a 12-seater private jet and, if yes, was it constantly shuttling between Delhi and Jaipur, airlifting Dr Naresh Trehan, Rajiv Sethi and other Page-3 high priests.

On the periphery of this exclusive muah-muah crowd hovered students from the Delhi University. Trying to look intelligent in baggy pants and swirling skirts, they came at their own expenses and were seen ticking all must-attend sessions. The only party-poopers were the scrawny-looking junior journos in mousy-coloured oversized warm gear with unwashed hair and an ‘I care a damn’ attitude, who had their travel and stay arranged and paid for by the festival’s organisers.

Money never flowed like this for books before. In the 80s, book launches didn’t exist in Delhi. In the 90s, a generous publisher could organise a high tea and a dull panel talk at the India International Center. The scene turned around in the latter half of the past decade when the launches became bigger, glitzier and PR-driven, with the Page-3 reporters being e-mailed a list of celeb invitees in advance. It was no longer about the books but about cocktails, canapés and the chance to rub shoulders with the likes of Malini Ramani, or her mother. The publicity director of Random House India once told me, “To ensure a hit, a launch must be celeb-filled.”

So what if the celebs hadn’t come to Jaipur for books? They had a good time, and so did many others who were there not to buy a Harry Potter or a Chetan Bhagat but to get their books signed by Ruskin Bond. True, the pop talk by the Sex & The City’s Candice Bushnell was a full house, but so was the story reading by Coetzee. Reading isn’t dead, it’s just got a little sexed-up.

At midnight during the Writer’s Ball on the last night of the Jaipur festival, the writers, the publishing house editors, the Page-3 types, the second-grade Rajmatas, the local leches, and the junior journos were eating, drinking and swaying to live Sufi music against a backdrop of the stunning Amer fort. Pointing at the illuminated ramparts of the fort, novelist Vikram Seth joked, “Look, the organisers created this prop just for us. Perfect.”

Scenes from the Writer’s Ball in Jaipur Flaunt it (this picture is taken by Martin Amis)