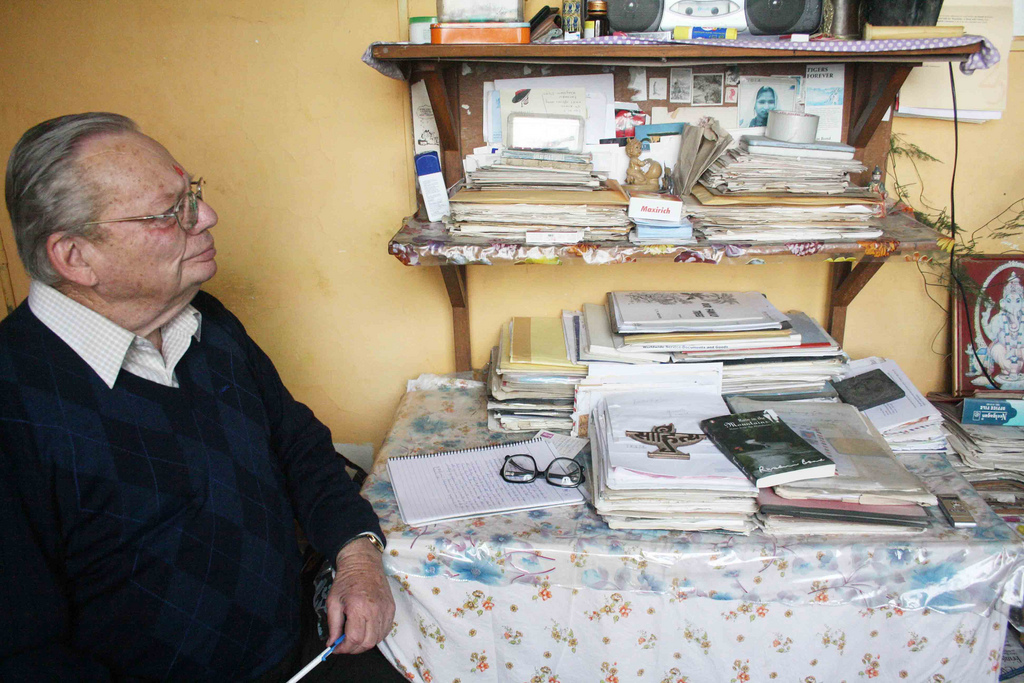 The Biographical Dictionary of Delhi – Ruskin Bond, b. Kasauli, 1934 The world is, according to a saying, only the size of each man’s head. Deodar trees, misty hills, night trains, haunted spirits, leaping langurs, mountain air, unhappy women and lonely children make the world of Ruskin Bond. And for more than 60 years, millions of readers have shared this world.

Mr Bond have lived in Delhi twice. First, as a child in a bungalow in Atul Grove Road, near Connaught Place, where he lived with his father, a Royal Air Force man. The second time was for a few years when he was a young man. He lived alone in the west Delhi neighbourhoods of Karol Bagh and Rajouri Garden. Mr Bond hated the city. To The Delhi Walla, the writer is still a Delhiwalla. A lot of his work is set in the capital. Feeling the necessity to include him in the Biographical Dictionary, I fixed an appointment at his home in the Himalayas.

“I’m a little more successful than I thought I would be,” he says, on reaching the six-decade milestone as a writer. Mr Bond, 77, was first published in August 1951 when The Illustrated Weekly of India carried his short story My Calling.

The unassuming author, born to Anglo-Indian parents in Kasauli, has all he wished for: a home in the hills, a loving family which looks after him, thousands of books, pen and paper and an income from the royalties he receives from the sale of his books. Mr Bond has published more than 80 titles, many of which are still in print. “I belong to the middle class, no, the upper-working class gentry,” he says.

Mussoorie has been his home since 1964, and Mr Bond is the town’s greatest monument. From hotel managers and shopkeepers to cab drivers, vegetable sellers and coolies, everyone knows the way to Ivy Cottage, Mr Bond’s home, which is as much of a tourist attraction as the hill station’s ropeway ride. Many locals also know his landline phone number (Mr Bond doesn’t keep a cellphone). Tourists knock daily at his home. In summer, they come in such large numbers that Mr Bond has to go underground. In all seasons, every Saturday evening (from 4-6), Mr Bond is sighted at the Cambridge Bookstore on Mussoorie’s Mall Road, where weekend revellers from Delhi and Uttar Pradesh flock to him for photos and book signing. Some of these encounters might anger a lesser mind, but Mr Bond handles them with his characteristic gentle humour.

“I’ve been congratulated as the author of Kipling’s The Jungle Book and occasionally mistaken for Enid Blyton,” says Mr Bond. “I’ve also been believed to be Jim Corbett. Can’t believe that I shot so many tigers!” Once a proud parent brought his little boy to Mr Bond’s house and requested him to autograph their copy of “his great book”, The Adventures of Tom Sawyer. Mr Bond signed as Mark Twain.

Mr Bond’s cottage, built circa 1860s, is like his writing: elemental and homely. The walls are made of rocks from the hills. The ceilings are of wood. The small drawing room is filled with books and awards. A single lamp casts a dim glow on the shelves, which are stacked with detective books such as Tales of Suspense, Dread and Delight, Victorian Ghost Stories and Great Cases of Scotland Yard. Emily Bronte and P.G. Wodehouse sit next to a red hardbound edition of David Copperfield, Bond’s favourite novel. Ahmedabad-based author Esther David’s The Book of Esther, which he is currently reading, is on the chair. “It is unpretentious and has got a nice feeling of family history done in the form of a novel.”

One wall has a framed portrait of Jeanette MacDonald and Nelson Eddy, American singers and movie stars of the 1950s. On the mantelpiece are black and white photos of Mr Bond’s parents. They had separated when he was 8. Mr Bond’s father lies buried in a Kolkata cemetery and his mother was cremated in Delhi. The survivor of a lonely childhood, experiences of which are reflected in his novels and short stories, Mr Bond now heads a joint family of nine—children and grandchildren of his former help Prem Singh, who came with his wife to work for him in 1969. Mr Bond never married.

In contrast to the chaos of the dining room with its noisy children, small eating table and a giant bukhari heater, Mr Bond’s writing room—where he also sleeps—has the sparseness of a monastic cell. It has nine flower pots, two windows, three paintings, one bed, one chair, one cassette player, one unused typewriter and a wooden almirah. The plaque of the Sahitya Akademi Award has come off its wooden stand and is now used as a paperweight.

“My room is like a railway compartment,” says Mr Bond, whose early stories were set in trains. “When there is a storm, the room is like a ship in a stormy sea.” Pointing to the door, he says, “This is my computer.” On it are pasted paper scraps of publishers’ phone numbers and cuttings of book reviews. A steel trunk below the bed has some of Mr Bond’s most treasured possessions: old issues of the Indian State Railways magazine, The Madras Mail newspaper, and the first edition of The Room on the Roof, his first novel.

The light spray of the day’s unexpected rain wets us as the writer of the hills opens a window. Waving at the forested slopes, he says: “All these are oak trees, and the winding road down there is going towards Badrinath.” Closing the windows, he says, “I spend a lot of time gazing at this view: the sky above, the hills before me and the garbage dump below. In the night, I can see the twinkling lights of the Doon Valley.”

Mr Bond wakes up daily at 5. From his bed, he watches the dawn breaking through the hills and the sky turning to a light blue. When the first rays of the sun fall on his bed, he goes to sleep again for another hour. His breakfast consists of toast with butter, cheese, marmalade, or parathas with pickles. “As you can see, I don’t diet,” says Mr Bond, who has a weakness for fish curry and mutton koftas. “I eat all the things I like. That is the secret of my happiness.”

By 10am, when his grandchildren are at school, his sons at work and his daughters-in-law are making lunch, Mr Bond gets down to writing, in longhand. After filling a few pages with a story or an essay, he writes to publishers and answers fan letters. After the meal, he reads a book till he is drowsy. The children return from school just as he is finished with his siesta. By 4pm, sightseers can spot Mr Bond taking a stroll down the road.

Walking alone, his black umbrella swaying in the rainy breeze, Mr Bond’s visage looks as bleak as his childhood years, which he described in his memoirs, Scenes from a Writer’s Life. “I have fallen in love off and on over the years,” he says. “My last intense romantic affair took place in the 1960s with a very sweet-natured woman. It would take a book to describe her.” Like most people close to Mr Bond, the woman was not fond of reading. “She now lives somewhere in the wilds of Delhi,” he says.

The autograph queue for Mr Bond at the 2011 Jaipur Literature Festival was longer than the queues for J.M. Coetzee, Vikram Seth and Candace Bushnell put together. Yet he has rarely used his influence to shape opinions about the issues of the times. We don’t know what he thinks about, say, Maoist violence or religious extremism. “I’m an Indian by birth and lifestyle but others look upon me as an outsider,” says the man whose last visit abroad was to London in the 1950s. “So I don’t want to impose my views on others.”

In an introduction to one of his books, Mr Bond, saddened by riots in the 1990s in curfew-struck Mussoorie, wrote, “Confined to the house, we must finally spend more time with our families, our children; try to reassure them that the world is not such a bad place after all.” In Mr Bond’s books, at least, it is not. Although his style has changed from merely romantic to being romantic with a cynical edge, his subjects are still apolitical.

In 2010 in Delhi, Mr Bond took a walk near his childhood home in Atul Grove Road. “Delhi has changed so much but that neighbourhood was exactly as it used to be when I was living there with my father. I was very happy.”

Will Mr Bond ever retire? “Writers don’t get provident funds or pensions,” he says, “so we can’t afford to retire.”

Does Mussoorie’s living landmark consider himself a great author? Looking at the misty flatlands of Doon, he says: “I recently went to a school where a teacher asked a little girl what she thinks of Mr Bond. The girl thought a lot, looked up and down at me and said, ‘Sir, you are not a bad writer.” Ruskin Bond and the rainy day