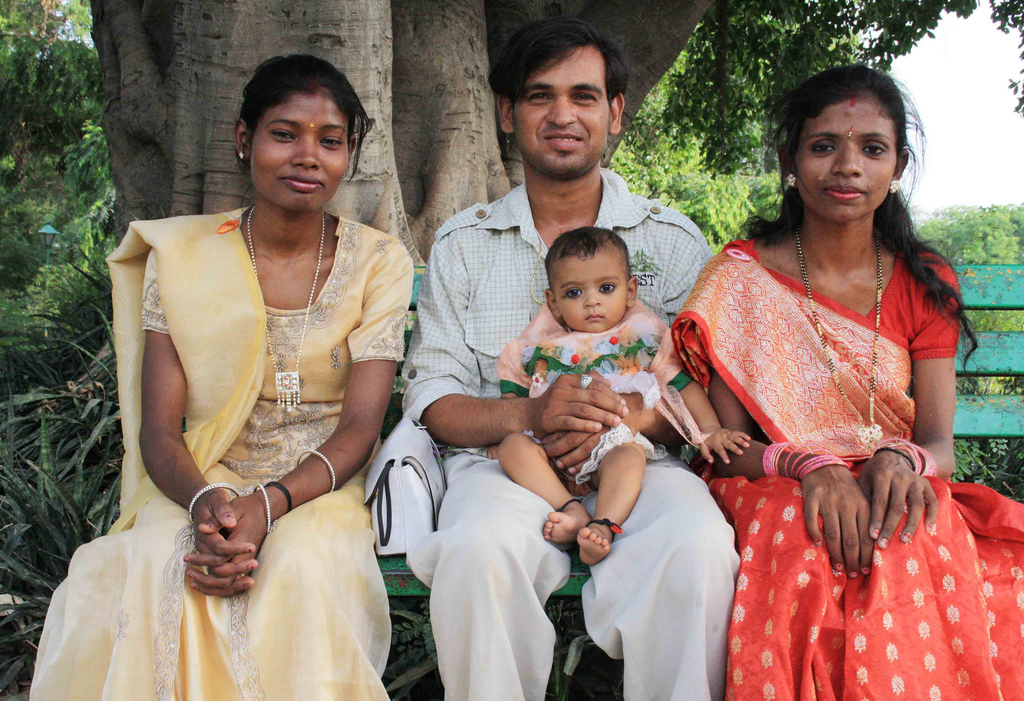 The Family of Man.

One summer evening in Lodhi Garden, The Delhi Walla meets a man, a woman, a woman and a child. Ashok Kumar, 27, is sitting on a bench, sandwiched between Rekha and Santoshi, who are dressed in shining red and light-brown saris respectively. Mr Kumar says that they are his wives. Both women cast sidelong glances at me, while Khushi, Rekha’s six-month-old daughter, looks around with big, black eyes. She is in her father’s lap.

It is the first time that the family is visiting Lodhi Garden, a landscaped park with jogging tracks and 15th century monuments. Mr Kumar is a building contractor and owns a two-room house in Mahipalpur, an urban village near Indira Gandhi international airport. He first met Rekha a decade ago. Her father had come from Bihar and was employed as a guard in Vasant Kunj, south Delhi. Sparks flew and romance bloomed between the couple. “We had a love marriage in 2008,” says Mr Kumar. “Rekha’s heart is clean,” he says. “I wanted a boy just like him,” says Rekha. For some reason, Santoshi, the second wife, beams in delight. Mr Kumar had married her in 2009. She hails from Jharkhand.

“Why did you marry again when you were already married to a woman you loved?” I ask Mr Kumar. His wives look a little restless.

How comfortable is Rekha with her husband’s second wife?

Rekha’s response doesn’t address my query but says a lot: “In 2005, when my father had a heart problem and had to be admitted to ‘Medical’ (All India Institute of Medical Science), it was Ashok who helped more than my own brother.”

“Her father still died,” Mr Kumar says apologetically, as if it was his fault.

The memory of a dead parent brings a silence that is broken only when Khushi starts to yell. Mr Kumar suggests that perhaps the baby needs to be fed. Rekha gets up, takes the child behind a tree and soon the cry stops.

Alone with his second wife, Mr Kumar requests me to take his picture with Santoshi. The couple gets ready to pose. Just then Rekha appears. Mr Kumar immediately calls his first wife to join him in the family portrait, but she turns away. Santoshi looks down and smiles sadly.

On repeated requests, Rekha finally takes her place on the bench but Khushi has started to cry with a new vigour.

Mr Kumar takes the baby in his arms. “Perhaps she wants water,” says Santoshi. She tosses off her stylish white handbag on the ground, takes out a water bottle from another bag, pours a few drops into the bottle’s plastic cap and puts it to Khushi’s lips. The howling ceases.

Are there fights in the family? “No, we love each other,” Santoshi says. Rekha is silent.

A few minutes passes before Mr Kumar says, “Listen, this is my daughter, these are my wives and I don’t want anything else in life.”

The family gets up from the bench. The husband keeps the water bottle in the bag, the wives readjust their saris, and then they all start walking towards a Lodhi tomb. Khushi with Rekha, Mother No. 1 Mr Kumar, where is Rekha?