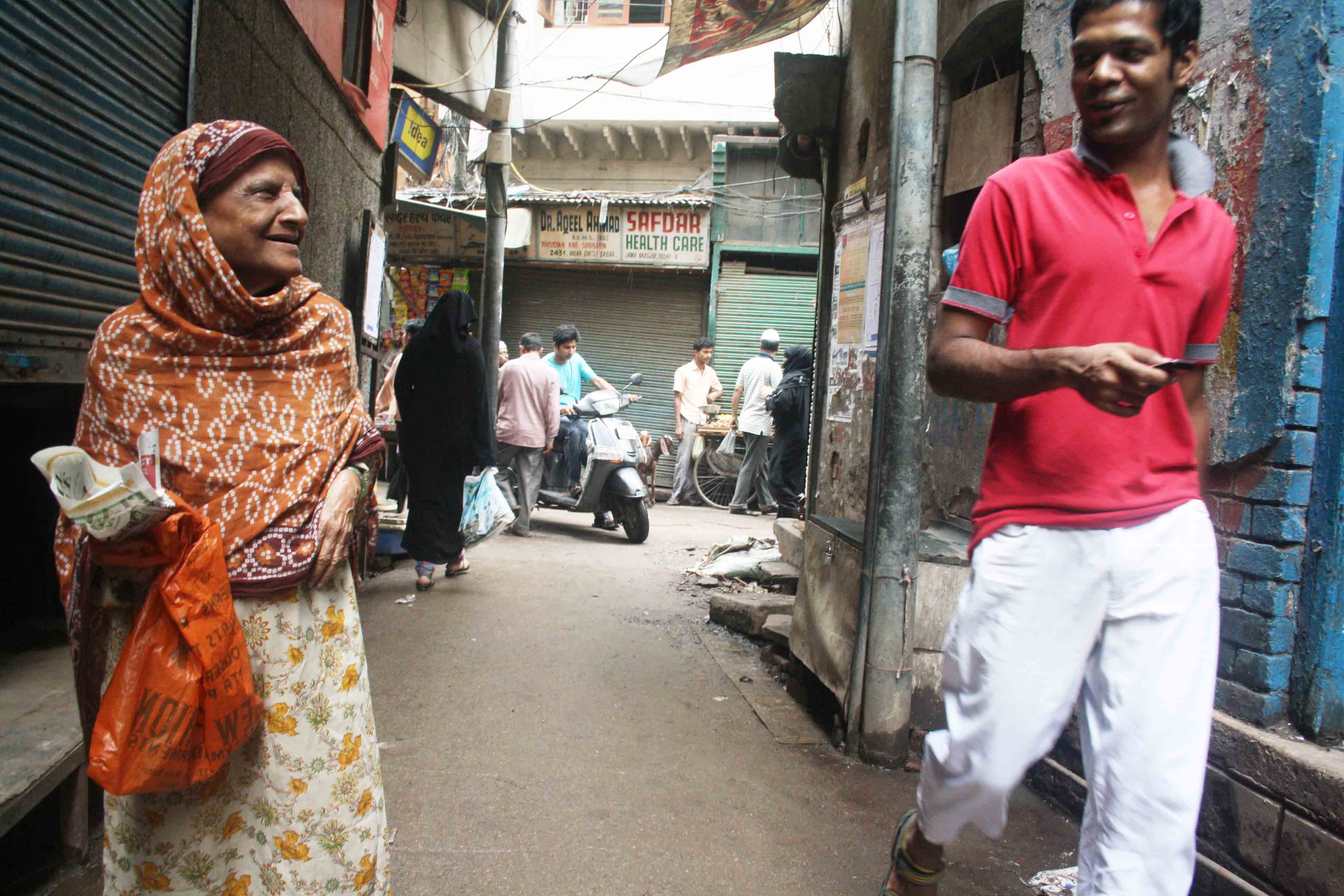 Blushing, she covers her smile with the red dupatta and lowers her eyes. Starting to speak, the dupatta falls off her face, which instantly dissolves into soft sobs. The Delhi Walla is with Zubeida Bano. Ms Bano, 72, is painfully shy. Having lived almost all her life behind the purdah, she is not used to interact with men outside her immediate family. Now she has no choice. Ms Bano, along with her disabled sister, is without a home.

Ms Bano, her sister and her younger brother lived with their father and his extended joint family in a mansion near Jama Masjid. “Our house was in Chawri Bazaar, Chitla Gate, Gali Gharraya, number 390.” Being a distant relative, Ms Bano’s father had no share in the property. A few years after his death, the mansion was sold to a builder. The brother left with his wife for a slum in Seelampur, across the Yamuna. The sisters were left to fend for themselves. They took up shelter in a series of low-rent hovels in the Walled City, surviving on the Rs 1,000 monthly pension that the Delhi Government gives to senior citizens.

Living in a one-room flat in Bulbuli Khana, a 5-minute-walk from Pahari Bhojla, the sisters have just been forcibly evicted by the landlord. One day last week he threw their clothes and cooking pots – the sisters have no other possessions – out of the room. “We’ve no oil, the stove is broken, the house is locked, and we are sitting outside.”

“His wife doesn’t like us and he himself doesn’t earn much.”

Ms Bano’s mother died in 1947, the year of the Indian partition. The father did not re-marry. “He worked in Hamdard Dawakhana. Everyone respected him. They called him Ustad Ibrahim.” The father rarely let his daughters out of the house. He tried to find them husbands but could not succeed since he feared for his daughters ending up with a drunkard or some such man. “Our father should have married us,” Ms Bano says. “Then we would have our families to look after us.”

On the night of December 6, 1992, the father died of a heart attack. “He passed away while listening to the news in the radio.” That evening a large Hindu mob demolished the controversial Babri mosque in the temple town of Ayodhya, 250 miles from Delhi. That tragedy permanently damaged India’s secular character and destroyed the lives of many Indian Muslims, including Ms Bano’s.

A day ago the newly homeless woman took her sister to the chief minister of Delhi. “We were offered a place in an old age home in Tilak Nagar (in west Delhi).” The sisters refused to go there. “Tilak Nagar is very far. I will die there. I belong to Old Delhi.” Ms Bano starts to cry again.

In 2009, the women left the Walled City for the first time in their lives and set up a home in Seelampur. They returned within a month. “The heart doesn’t agree in any other place.” Finding a new place within Old Delhi will be difficult because landlords, fearing for any health-related emergency, are unwilling to rent out their rooms to old people living alone.

The sisters cooked at home but after the price of kerosene rose, they started to buy rotis (Rs 5 each) from a bakery. The curry (Rs 10 for a portion) is bought from a nearby eatery. “When our father was alive, we lived in style.”

Despite her present poverty, Ms Bano has an elegance that is the work of generations. Her conversational Urdu is as pure as that of any 19th century Old Delhi poet. Her pronunciation is perfect. Her manners are gentle. Her tone is commanding. Her salwar-suit is clean. Her arm is decked with green and pink glass bangles. Her smile is life-affirming.

“Our father’s home had khus curtains hanging in all the windows so that no outsider could see us,” Ms Bano says. Eyes welling up with tears, she adds, “Now I’m on the road and without a burqa.”

[This is the 44th portrait of Mission Delhi project] ← Photo Essay – The Aloofness of a Man in the Indian Coffee House
City Food – Delhi Belly, Around Town →