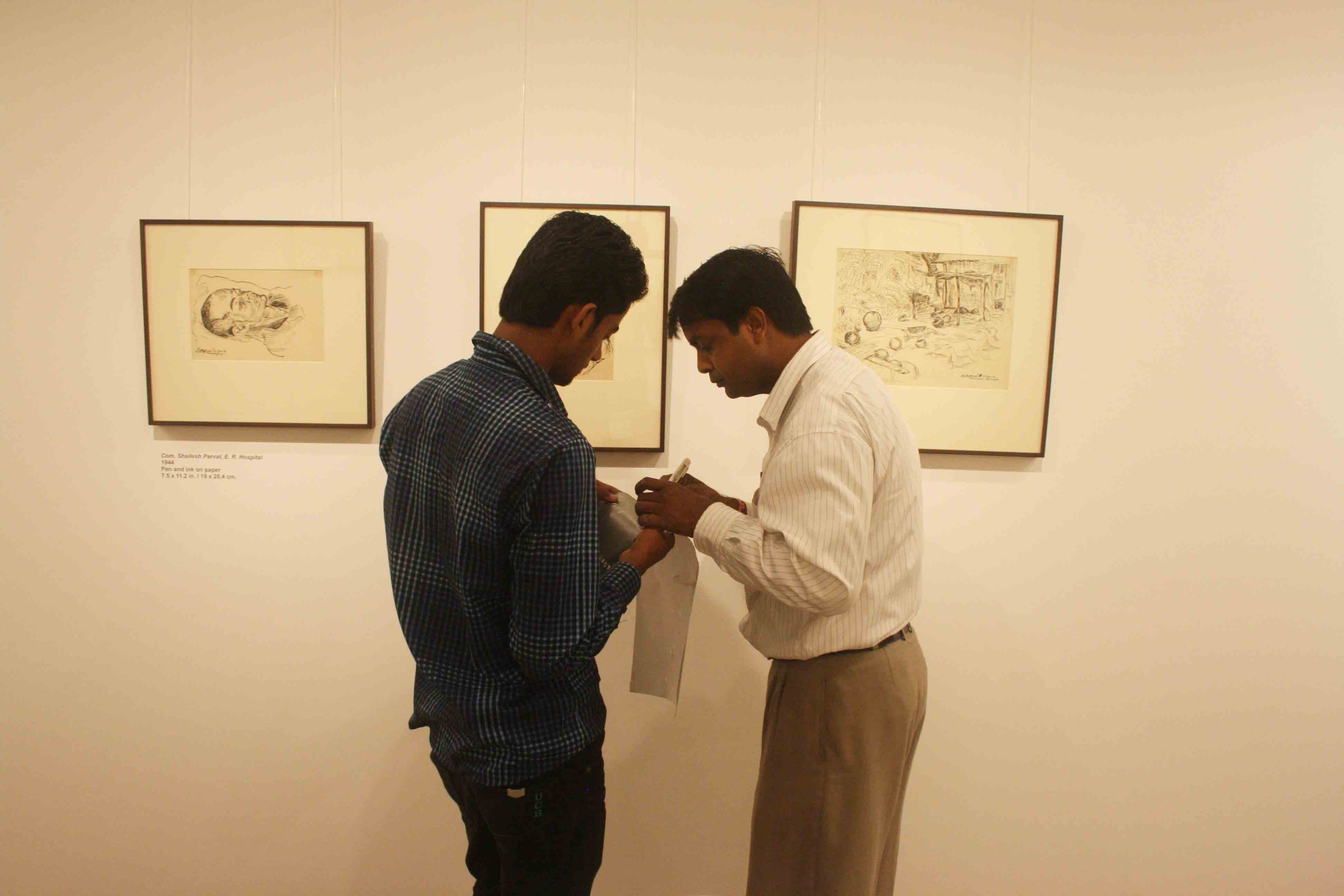 The artist as ideologue.

Artist Chittaprosad Bhattacharya (1915-78), whose retrospective opened in Delhi on July 11th 2011 was most memorably the illustrator of the Bengal Famine of 1943 in which more than three million people died. But even if he had not wandered with his sketchbook in that starving countryside, occasionally on foot from one village to another, Bhattacharya’s collected drawings, prints and paintings would still be full of feeling.

Chitta, as his friends called him, was born in Naihati, West Bengal; his father, a government officer, was an amateur pianist, and his mother a poet. Having spent most of his productive years in Mumbai, his work is diverse and some of it is borne out of his political ideology.

Part of the Communist Party of India (CPI) cadre, the self-taught artist created portraits of Vladimir Lenin, Joseph Stalin and Mao Zedong, made propaganda posters celebrating the oppressed masses, caricatured politicians and colonizers, drew lovers and mothers, and depicted riverside and villages. He made the poster of Bimal Roy’s film Do Bigha Zameen and produced linocut prints of deprived childhoods. He experimented with puppetry and did calligraphy in Bengali. Bhattacharya’s work is displayed at the National Museum of Prague; he had many admirers in erstwhile Czechoslovakia, where his first major exhibition was held in 1956. He never went abroad, never married. He died of chronic bronchitis at age 63.

Besides his drawings, watercolour paintings and prints, the exhibition at the Delhi Art Gallery includes Bhattacharya’s published writings, letters, posters, photographs and puppets. For the show, the gallery has published four lavishly produced books that are encyclopaedic in charting the artist’s life, work and thoughts. One is the facsimile edition of his book Hungry Bengal, all copies of which were seized and burnt by the British. A single copy survived in a bank vault in Kolkata.

By 1943, Bhattacharya had settled in Bombay. The CPI sent him to Bengal’s Midnapore district to cover famine victims for People’s War, the party mouthpiece. Hungry Bengal is a selection of 22 sketches from the many that appeared in that weekly journal. These black and white images of Bengal’s living skeletons are stark, not voyeuristic. Despite losing everything—their land, family, even clothes—the famished people retain a flicker of their humanness in Bhattacharya’s lines and strokes: a boy’s half-raised head, a woman’s bony hands holding a pitcher, a man looking away from the food offered to him.

Sadly, the originals of these images too were destroyed. The absence is compensated for by the inclusion of drawings that Bhattacharya made during a tour of the eastern districts of Bengal in 1944. This set illuminates the experience that is still lived in our cities.

Bhattacharya’s propaganda posters for the Communists are a different story. They could be mimicked by today’s ideologues. At the Cost of Lives shows a dhoti-clad farmer pinned to the ground. A military base is built around his body. Fighter jets are parked on his bare back. A general is entering the fenced enclosure and is being saluted by a turbaned guard. Muscled but in bondage, the angry farmer is clenching his fists.

How would someone in, say, Singur, West Bengal, interpret it today? Would there be Nano cars parked on the farmer’s back and would the general being saluted be industrialist Ratan Tata? Or would it be bullock carts on Ratan Tata’s back, with new West Bengal chief minister Mamata Banerjee as the general?

In Bhattacharya’s most impactful propaganda drawings, the oppressed is always a man with strong bare limbs, whose chains have just broken and who is about to annihilate oppressors the size of insects. Typical of the kitschy revolutionary art that came of age with the rise of the Soviet Union, such images lack the subtlety of Bhattacharya’s other works, but then propaganda is all about communicating one’s ideology in the simplest and most direct way.

By the late 1940s, disillusioned by the growing sectarianism in the CPI, Bhattacharya started withdrawing from politics. The violent images gave way to idyllic scenes of village women and folk dancing. He painted birds, flowers and nudes. He made a series of linocuts, Angels without Fairy-Tales, on the lives of children as family earners. He drew cover illustrations for children’s stories with titles like The Kingdom of Rasogulla. He founded a puppet theatre and hosted plays for his area’s slum children in Bombay. He wrote poems. He drew scenes from the Ramayan.

Living in a one-room apartment called Ruby Terrace in Andheri, Mumbai, Bhattacharya’s house had books, a dog and a cat. Dressed in a vest and lungi, he would recite the poems of Stéphane Mallarme, Friedrich Hölderlin and Rainer Maria Rilke (in at least two photographs, he is seen in a torn vest). He cooked his own food; the stove and dinner plates were stacked under the bed, next to his paintings.

Bhattacharya never overcharged for his works. If a buyer gave him more than he thought right, he would return the money. Spending most of his earnings on books, he struggled constantly. In a letter to his mother in 1965, he wrote: “Only the other day, the dailies were writing volumes about my work after the exhibition in Kolkata. But nobody spends a pie to buy my work… I have been able to survive because a few foreigners have paid me for the pictures they bought. If I had to rely on the people of my own land, I would have died a ghost long ago.” Bhattacharya died in Kolkata where his sister took him after an extended illness.

Chittaprosad: A Retrospective is on at the Delhi Art Gallery, 11, Hauz Khas Village, from 11 July-20 August, 11am-7pm (Sundays closed). It will show at Kolkata’s Birla Academy of Art and Culture from 30 August-11 September. The works will be on sale, at prices ranging from`20,000-10 lakh. Nearest Metro Station Green Park

At the Cost of Lives A hungry man from Bengal Quick, the door is opening