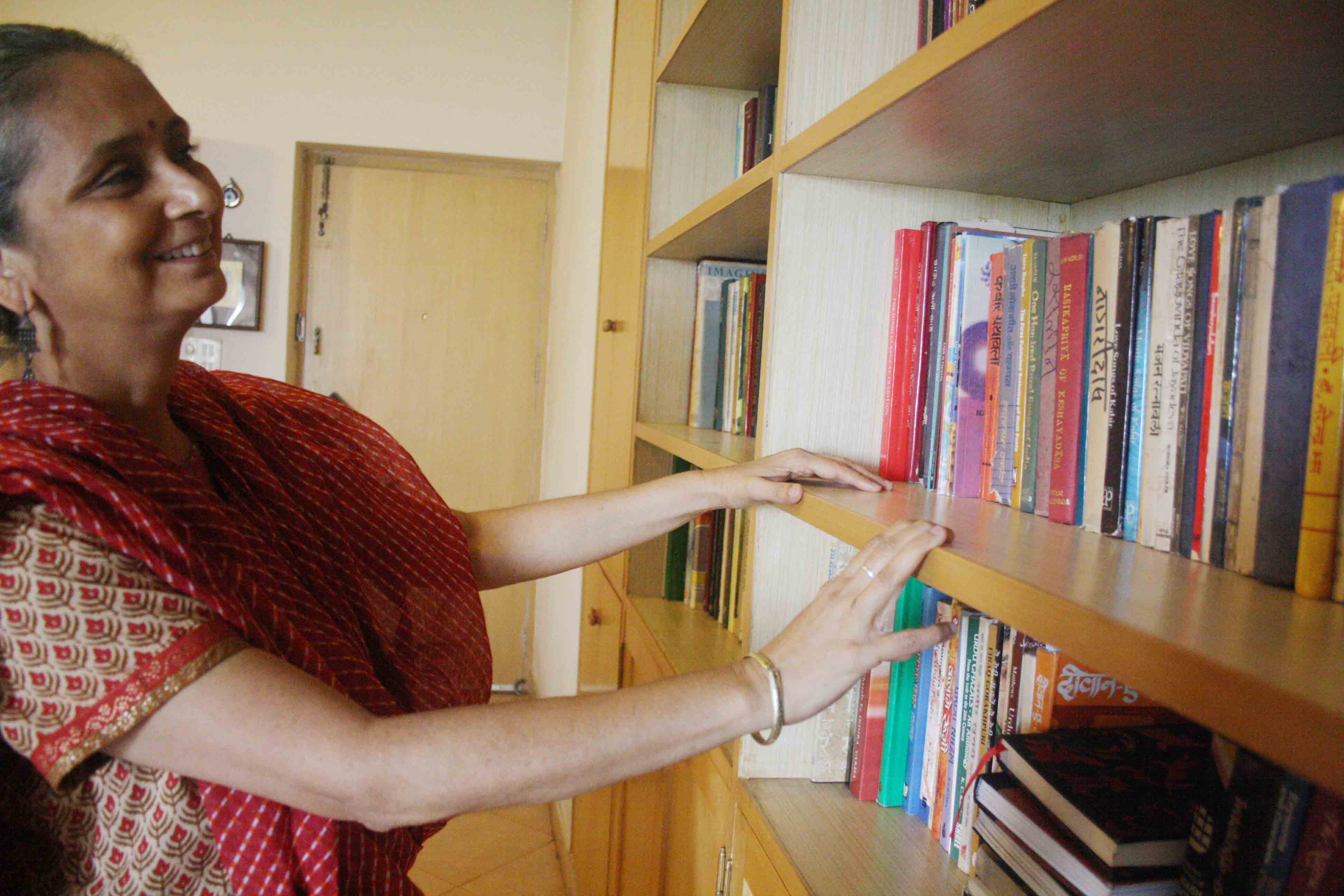 One humid afternoon The Delhi Walla knocked at the door of thumri singer Vidya Rao. In her 50s, Ms Rao shares her second-floor apartment in Mehrauli, south Delhi, with her cat Sufi and her hundreds of books. “I’ve no idea how many I have,” says Ms Rao. “I’ve decided to stop accumulating books.”

“I no longer want to be burdened by things. I need to keep my life light.” Waving at the living room’s book-lined wall, Ms Rao says, “Books are of course superior to other kinds of things but they too are objects.”

Walking to the shelves, the singer says, “This is my abridged library. I’ve given away most books.”

Ms Rao has an eclectic taste in reading, ranging from classical music and Indian history to literary fiction and mystery novels. Her collection included sections on sociology and anthropology. “Those have gone to an Adivasi academy in Gujarat. I’m a member of its advisory board.”

A regular performer in Delhi’s cultural soirees, Ms Rao earns her living as an editor with Orient Blackswan, a publisher of academic books. Also a writer, she is currently giving final touches to her memoirs of legendary singer Naina Devi, her guru. Ms Rao has intermittently written on thumri traditions and gender issues in music.

“I’d been giving away my saris and paintings,” Ms Rao says. “One day I was thinking that if I ever moved from Delhi, I couldn’t take along all of my books. I had to detach.”

Ms Rao has donated many books to the Deer Park institute in Himachal Pradesh, a centre for study of classical Indian wisdom traditions. “I gave them my philosophy collection.” The singer had lots of books on Carl Jung, a Swiss psychiatrist. They were dispatched to the Jung Center in Bangalore. “It’s not that my books are going to unknown places. I frequently travel to these institutes and they will remain accessible to me.”

A few months ago one of Ms Rao’s friends borrowed her beautiful Oxford University Press edition of Ahmad Ali’s novel Twilight in Delhi. She e-mailed him, saying, “I think you have my copy of Twilight in Delhi? If yes, please keep that with my love.”

Sitting down on the carpet, Ms Rao says, “Books must go to libraries where they would be accessible to a large number of people. But a few I’m also giving to friends whom I know would treasure them.”

One novel that Ms Rao will perhaps never give to anyone is the first hardbound US edition of Vikram Seth’s A Suitable Boy. It was gifted by her daughter in 1996. Ms Rao shows me the inscription:

The daughter lives in Bombay.

The other books that Ms Rao is not wishing to part with are volumes on Indian music, including biographies of musicians. There are also books on courtesans. Moti Chandra’s The World of Courtesans is stacked with The Courtesan’s Arts by Martha Feldman and Bonnie Gordon. Frédérique Apffel-Marglin’s Wives of the God-King is on the rituals of the temple dancers of Puri.

The top shelf has novels by Alexander McCall Smith, Margaret Atwood, AS Byatt, Amy Tan, Amitav Ghosh and PG Wodehouse. “I’m currently hooked on to the adventures of McCall Smith’s Edinburgh detective Isabel Dalhousie,” Ms Rao says. “Being the editor of a journal on applied ethics, she thinks in terms of ‘Is this right? Is that wrong?’ It’s similar to how we interpret things in our daily lives.”

Since Ms Rao is a frequent traveler to Turin and Milan, the thick blue paperback adjacent to Listening to Hindustani Music happens to be Lonely Planet Italy.

Will these books stay forever with Ms Rao? After gazing for a minute at her cat that is sleeping by Vikram Seth’s novel, the singer says, “I’ve kept the books that I’m much attached to. Maybe I’ll give them away later.” The remains of the library