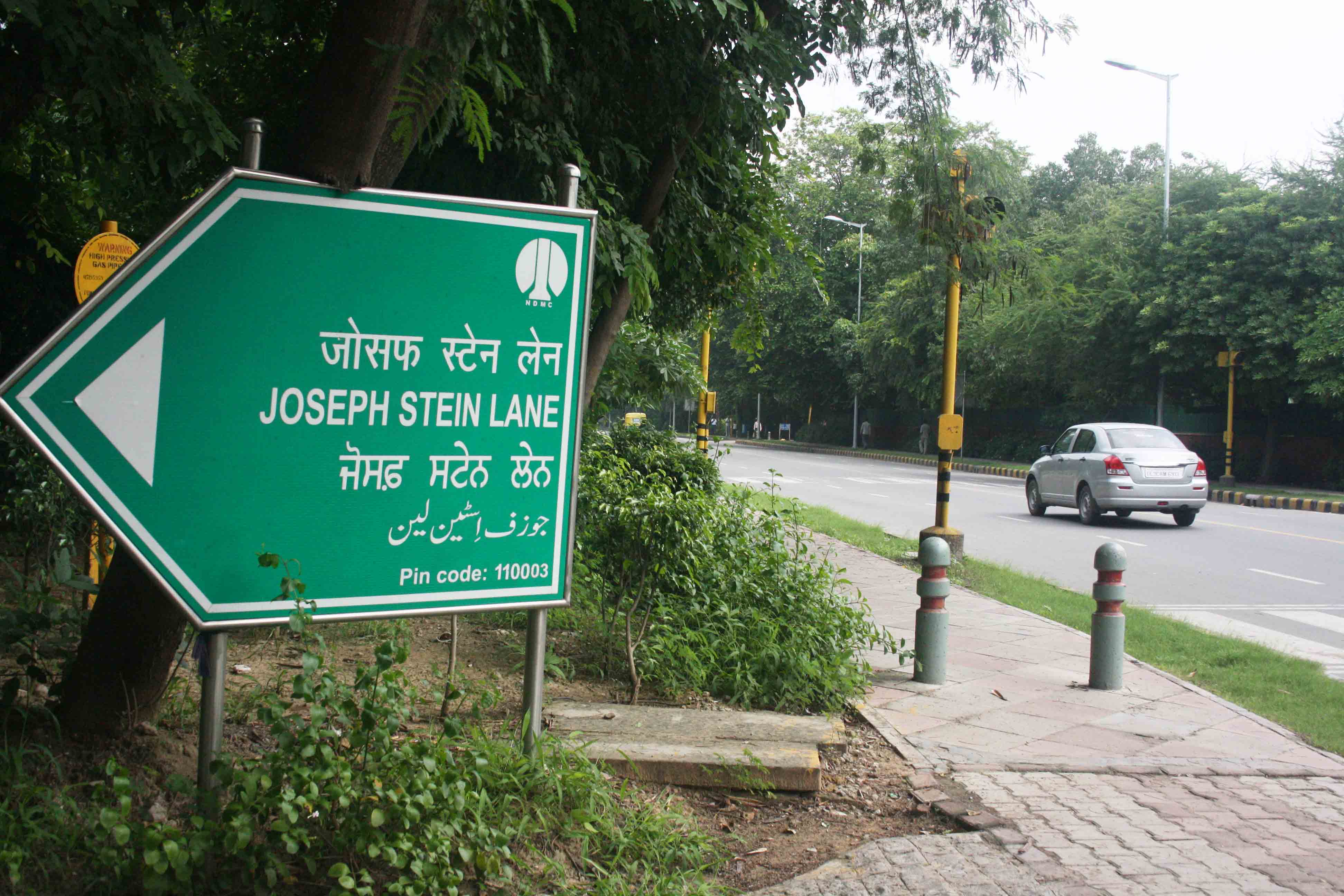 September 7, 2011 · by The Delhi Walla · in Biographical Dictionary The Delhi Walla is walking down Joseph Stein Lane, the only road in Delhi named after an architect. This is the heart of “Steinabad”, the nickname given to Lodhi Estate in central Delhi. The area has a series of buildings designed by the late Joseph Allen Stein​, who transformed a small part of the Capital with his vision.

The tree-lined lane cuts through two buildings designed by him: the Ford Foundation headquarters and the India International Centre (IIC). The only sound is of the cascading fountains at the Ford Foundation complex. The lane ends at Lodhi Garden, whose ruins mark a significant architectural era well before Mr Stein’s.

“His buildings represent the best of post-independence construction in Delhi and they must be recognized as landmarks worthy of preservation,” says Ratish Nanda, conservation architect with the Aga Khan Foundation, of the American who made India his home – first Calcutta, then Delhi — for the last five decades of his life.

The other Steinabad landmarks are the offices of the United Nations Children’s Fund (Unicef), the World Wide Fund for Nature, a conservatory within Lodhi Garden, Gandhi-King Plaza, an open-air memorial in IIC, and the India Habitat Centre. The landscaping of Lodhi Garden, as we know it today, was carried out under his guidance. Mr Stein, who died in 2001, also designed the Triveni Kala Sangam at Mandi House, the American International School and the Australian high commission in Chanakyapuri. The steel domes and concrete columns of Pragati Maidan too are his.

Born in 1912 in Omaha, Nebraska, US, Mr Stein studied in Illinois, New York and France. He worked with renowned architects such as Ely Jacques Kahn​ and Richard Neutra​, and was inspired by the likes of Frank Lloyd Wright​ and Eliel Saarinen​. In 1952, Mr Stein arrived in Calcutta as a professor of architecture at Bengal Engineering College (now University) in Sibpur, next to the botanical gardens, which, too, shaped his thinking. India under prime minister Jawaharlal Nehru​ was a liberal land open to ideas and hungry for progress. Mahatama Gandhi​ and Rabindranath Tagore​ lived on in people’s minds. Their ideals of creative thinking and simple living shaped Mr Stein’s philosophy of integrating man-made construction with nature’s expressiveness. Three years later, Mr Stein moved to Delhi, a city he made his home.

He typically designed two- to four-storey buildings that fused with the surrounding trees, gardens and pools; flowers and vines would spill over the walls. Mr Stein’s designs were modernistic, but inspired by India’s past. “He brought a ‘California modernism’ sensibility to this country,” says artist Ram Rahman, whose architect father was a friend of Mr Stein. “He was good at working with local materials, be it granite or glazed tiles, both influences of Tughlaq architecture.”

Mr Stein foresaw what the juggernaut of progress would do to the delicate balance of ecosystems; his designs sought to find harmony. In an interview in 1982, he said: “India has intense and sharply drawn environmental problems. There is probably no possibility of solutions here except along what may be called Gandhian lines, which means essentially seeking simple and ecologically gentle solutions.”

This thought was best translated in the IIC, an oasis for Delhi’s intellectuals. Completed in 1962, this is a world of grassy open spaces, placid pools, paved walkways, jaalis, porticos and canopies. The buildings, instead of soaring high, give a feeling of coming down to meet the earth. Bougainvillea crawls up the stone walls, mynahs nibble on the grass, and lotus leaves float in the water. The daylight falls soft, and shaded spaces are close by.

“IIC has an understated brilliance,” says author Rakhshanda Jalil, who has been a member for 10 years. Sitting in the lounge, with the windows looking out to the fountains and the Lodhi Garden beyond, Ms Jalil says: “Nothing jars. The building blends beautifully with the garden, as if it’s a natural extension. This year, I finished writing my PhD in a cubicle in the library here. The window looked to a little patch of lawn. A mongoose would come, pop itself on the glass, peer in, and go away.”

Did Mr Stein influence architecture in the rest of Delhi? The view from Parikrama, the rotating restaurant just off Connaught Place, suggests he did not. The grey skyline dampens the grace of the colonial-era corridor. The sleek Jawaharlal Nehru Stadium, towards the south, looks like a hamburger. To the north, the Shyama Prasad Mukherjee Civic Centre, the city’s tallest building, is a brazen show of glass — the growing popularity of glass is baffling in a tropical country where it just traps heat.

“The glass buildings are energy-consuming monsters,” says Golak Khandual, an architect who works in the countryside and uses the city as a transit camp. “They lock in the tropical sunlight and then, to handle it, you need more powerful air conditioning, which means more power.”

But this is the idea that Delhi has bought into. The new buildings, with their blinding glass façades, are all examples of architecture working against nature. “Why do we always want our buildings to be sensational and stunning?” asks Ms Jalil. “Why are we not able to see a beauty that is subdued and understated?” She is sitting at Gandhi-King Plaza. Two giant pilkhand trees, planted by the master architect himself, give permanent shade. Every element calms you.

It’s an irony that modern construction, with all its resources, cannot achieve what traditional architecture did easily. In the 16th century Adam Khan tomb at Mehrauli, south Delhi, drug addicts sleep inside the dark chamber, bats hang from the roof, dogs prowl the corridor… Yet, like so many other medieval-era ruins, the building’s elegance has survived the ravages of time. In summer, the tomb stays naturally cool.

“Our buildings were more aesthetically pleasing in the past because we were not technologically advanced,” says Prof. Mandeep Singh, head of the department of urban design at Delhi’s School of Planning and Architecture. “We used only locally available materials and the design always addressed the need to keep the space comfortable in Delhi’s harsh weather. No window was wrongly placed. Now we have air conditioning, so we take liberties. We’re playing with the earth.”

Mr Stein created gently on earth. The India Habitat Centre, constructed in the late 1980s, was his last major work. The pinnacle of his art, he designed it as a series of blocks, linked by shaded courtyards, stairs and walkways, screened from the sun as well as the noise of traffic. To soften the concrete and tarmac, the vertical face of each building sported flowers and creepers—as do the Ford Foundation headquarters and Triveni Kala Sangam.

Many Indian architects worked with Stein and were influenced by him, especially in terms of sensitivity to material. “From him, I learned perseverance, not letting my building principles be swayed by clients,” says Praveen Vashisht, who worked with Stein in the early 1980s and whose firm looks after Stein buildings such as Triveni Kala Sangam in Delhi and the Express Towers in Mumbai. “He believed in the straightforward expression of the intent of the building and how it was related to the site.”

Writing in 1982, Mr Stein shared his wisdom: “In the 20th century, the pressures of population, land speculation, the tight and often sterile industrialised construction requires that the architect consciously seek not to spoil the earth with his work as he extends hard constructions even onto the last recess of Nature.”

The biography of the man who took the Mughal art of garden monuments to another level was aptly titled Building in the Garden. In 1992, Mr Stein was awarded the Padma Shri. Devoted to the works of Shakespeare and Arthur Koestler​, he managed to learn only two Hindi words: accha and bas. In Delhi, he first lived in Chanakyapuri from 1955 to 1968, before moving to Sundarnagar; after the death of his wife, he moved further south to Friends Colony. On weekends he dined in IIC, always ordering seekh kebab and naan. In 2001, he was on a visit to the US when he fell ill — he died in October, aged 89.

In a world of falling standards, his work remains exceptional.