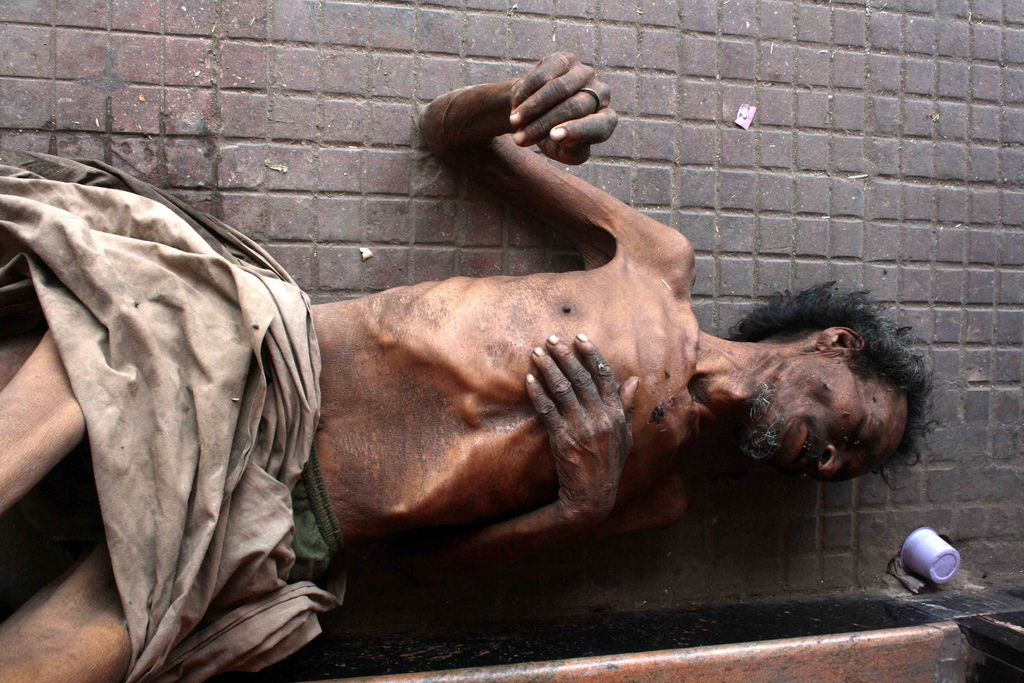 Except a discolored cloth around his waist, he is naked. Flies are buzzing on his lips. Grey stubble is growing out of his chin. His hair is wiry; his skin is hanging loose from his bones. The Delhi Walla came across this man one afternoon at a pedestrian corridor in Asaf Ali Marg, the road that borders the new and the old quarters of the city.

Lying on the floor, a few steps away from the ticket window of Delite cinema, the man’s body is still. It is greased black with dirt as if he hasn’t washed for months. A rickshaw puller named Muhammed Abid joins me.

Shaking his head, Mr Abid says, “He must be a laawaris. I don’t think he has family or friends.”

The middle-finger of his right hand has a ring.

Looking at the man with patronizing contempt, the sort that a strict father would show to his truant son, Mr Abid says, “These people become beggars by choice. Can’t you see that his body is claimed by smack?”

All across Delhi, in backlanes and in subways, it is common to see homeless people – men, women and children – trying to sniff the fumes of heroine powder that they place on heated aluminum foils. Perhaps this is their only escape from hardships of the world.

The man has no flesh on his body. More flies have gathered on his eyes and lips. Some have started nibbling into a wound on his chest. Looking carefully at the flies, as if they could lead to a diagnosis of the man’s situation, Mr Abid says, “He’s dying.”

Mr Abid walks back to his rickshaw.

What is to be done? Should I call an ambulance?

Suddenly, the man stirs. Turning a little, he lifts his legs and mumbles some inaudible words. His eyes remain closed. Flies refuse to move away from his lips. The man mumbles again.

I quickly get him a chilled mineral water bottle from Chor Bizarre, a fine dining restaurant at the nearby Hotel Broadway. The man holds the bottle close to his chest. Perhaps he is too frail to open the lid. I want to help him but I’m scared of coming in contact with anything that his unwashed, possibly infectious, hands have touched.

The man stirs again and somehow opens the bottle. I watch him drink.

“Are you from Delhi?”

Mr Thapa finally opens his eyes. The flies flit around in excitement. “I’m from Nepal. My village is near Kathmandu. I came to Delhi 15 days ago from Haridwar.” The eyes close. The flies come back.

“Will you like to go back to your home in Nepal?”

He shakes his head very slowly.

Mr Thapa again opens his eyes. He clasps his hands together as if in gratitude but says nothing.

While I’m wondering how to walk away from him, he starts speaking. “I’m very weak.”

I sit down by his side. Gently tapping on my arm, Mr Thapa says, “Don’t worry. I won’t die.”

[This is the 48th portrait of Mission Delhi project]