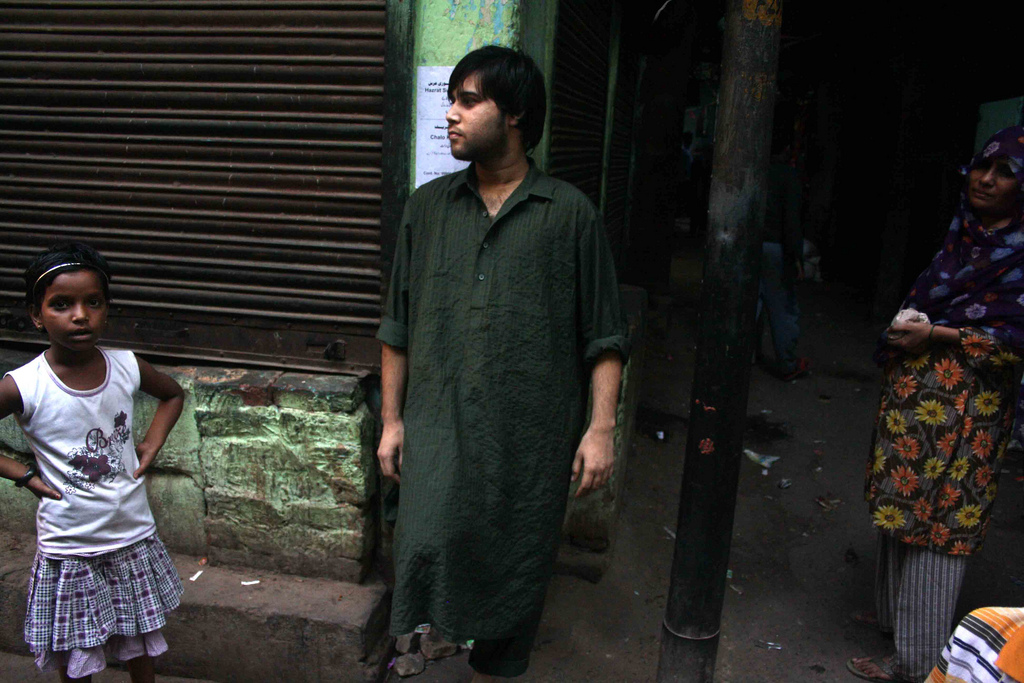 Khwaja Mir Dard Basti, or Shakur ki Dandi, is crude and poorly constructed. Yet it has poetry, music and handmade art. It is sandwiched between the city’s tallest high-rise and a college that traces its origins to the 17th century.

The basti is a 5-minute drive from Connaught Place, but feels miles away from Delhi’s bustle. Beggars sing, girls play kikli, and cats prowl for food. The sun never enters the narrow alleys. In summer, they stay cool. In winter, they keep the cold winds at bay.

Will the basti survive? Some residents are fearful of change. Those who don’t live here may simply not care; that is, if they are aware of its existence.

In 1947, this was a graveyard. Now, according to locals, there are 9,000 people here. The 2.5-acre land is like a Petri dish containing the unresolved issues of land and resettlement, high art and low culture, industry and labour, migration to the city, and within the city.

The basti flanks Zakir Husain College. Its shabbiness is made starker by the Dr Shyama Prasad Mukherjee Civic Centre, a 112m skyscraper of grey concrete and glass, the new headquarters of the Municipal Corporation of Delhi (MCD). Opened in 2010, it looms over Khwaja Mir Dard Basti as commandingly as Jama Masjid does over Shahjahanabad, the Walled City, across the adjacent Ramlila Ground. If the two visions there are in harmony, the ongoing court case tells us that here they clash.

In 2008, while the building was being completed, the MCD proposed a road through the basti for “effective movement of the traffic from the upcoming high-rise office buildings”. It planned a survey of the basti to allot land in a far-flung area to rehabilitate the residents.

“But why rehabilitate a settled people?” asks lawyer Ubaidul Aleem, legal adviser to the basti’s residents welfare society, which went to the Delhi high court. Once the MCD realized the land was owned by the Wakf Board, a religious endowment made for the benefit of the needy in the Muslim community, it filed an affidavit, saying the survey was fixed “on the assumption that the land belongs to MCD”.

That assumption could have destroyed a place as old as India’s independence. MCD called it a “cluster”. It is home to the Mirasis, a community of Muslim musicians who perform at Sufi shrines and in red-light districts. Its handicraft workshops produce “export-quality” earrings and pendants. Its dingy hovels are hostelries of multi-speciality cooks who conjure up seekh kebabs, spring rolls and spaghetti Bolognese for farmhouse parties.

The basti’s great landmark—the tomb of 18th century poet-saint Khwaja Mir Dard—is rarely visited by Delhiites. “And still, the man who has found his final resting place in this modest tomb was, in his time, one of the great mystical leaders of Delhi and was, at the same time, the first to write mystical verses in Urdu,” wrote Sufism scholar Annemarie Schimmel in her book, Pain and Grace: A Study of Two Mystical Writers of Eighteenth Century Muslim India, published in 1976.

During the day, goats graze inside Mir Dard’s circular mausoleum, hopping across the tombs. Outside is a butcher’s stall with chunks of meat on display. The mausoleum is hemmed in by residential blocks. Until a few years ago it had no roof and the tombs—all done in ceramic tile—were exposed to the elements. Now, a tin roof makes it as claustrophobic as the chai shack of Naved Jamal, whose grandfather, a wealthy trader, had a mansion in Old Delhi.

The basti was established in the 1950s at a time when the Wakf Board was leasing out space to Muslims. Like Jamal, many settlers were from the Walled City. “When grandfather’s family grew,” he says, “the haveli was partitioned, then broken to build smaller rooms to fit in married sons. Finally, we were too many, we had to look for a new place.”

The same factors are currently causing another migration. “Most Mirasis are moving to Laxmi Nagar,” says Rameez Ahmed, referring to the locality in east Delhi. Across the river Yamuna, it is close to the area where Mirasis work and is more spacious.

A Mirasi, Ahmed’s grandfather performed with Chawri Bazaar’s courtesans. The grandson plays the tabla every night for the dancing women on GB Road, Chawri Bazaar’s successor as the city’s red-light area. The brothels are a mile away from the basti.

The relocation runs parallel with a disintegrating way of life.

“My dada saab made his living in Chawri Bazaar when kothas (brothels) were patronized by nobles wanting to educate themselves in tehzeeb (etiquette) and tameez (decorum),” says Javed Khan, another Mirasi working on GB Road. “Twenty years ago, customers requested for classical music styles such as thumri or dadra. Today, it’s only the latest film songs. It’s rare when somebody requests a mujra (courtesan dance) from Mughal-e-Azam.”

Cook Muhammed Salman, 21, is listening to this season’s hit number ‘Aaya re Aaya Bodyguard‘ on his cellphone. He and nine others live in a small room with no furniture. The tandoors and kebab skewers are stacked on a shelf. The bulb’s glow is dim. “Do you want pasta?” asks Salman, adding quickly, “in white sauce or red?”

Most cooks living in the basti are from Amroha, in Uttar Pradesh. Not traditional kitchen hands, they learn on the job. Depending on contractors to put their ‘parties’ (a group of cooks who operate together) on a daily-wage basis in the banquet kitchens of luxury hotels and grand south Delhi parties, busy weeks are followed by days where there is no work.

There are few holidays for the basti’s Bihari handicraft workers. Tramp up the steep stairs to rooms that are workplaces during the day, dormitories at night. Sitting amid seven men, Muhammed Mujib, 30, says, “We are both labourers and artistes.” The men use beads to make handmade necklaces, which are sent through middlemen to foreign markets such as Dubai.

Mujib, from Katihar, Bihar, runs the business from this room. Workers in a unit are often from the owner’s village. A large sum is given to a young man’s parents, and he is brought to Delhi as a salaried employee. He cannot leave the unit till he repays the loan given to his family.

Some owners might be seen as exploitative but since the turnover is insignificant, there is little distinction between an owner and his staff. They all live in the same room, sleep on the same floor, eat the same food, and watch the same Bhojpuri films on TV. Occasionally, newspapers report police raids in which child labourers are rescued from such sweatshops.

Otherwise the rhythm of life in the streets is hypnotic. Tombs criss-cross the lanes. A few alleys open into cubicle-like intersections that look to the sky. Goats are tethered to almost every door, passers-by pat them lovingly. Most women only ever come out in a burqa. Sterner than men, they stop anyone new to the neighbourhood, asking if he is up to some trick to evict people so that the basti can be razed and redeveloped as a park.

Could that really happen? “That’s unlikely,” says lawyer Aleem. “We have a stay order from the court. People fear that this basti might be demolished because of rumour-mongering by local politicians and also due to ignorance and illiteracy.”

Unlike other poets, musicians and scholars who fled to towns like Lucknow in search of a new livelihood when Delhi was ravaged by invaders, the basti’s patron saint, Mir Dard, never left his city. He wrote:
“Delhi which has now been devastated, tears are flowing now instead of its rivers; This town has been like the face of the lovely, And its suburbs like the town of the beloved ones.”

Today, there are invasions of a different kind. Instead of writing sad verses, the people are trying to get on as best they can; finding jobs and opportunities, moving into the neighbourhood and leaving it forever, in search of a better life. Khwaja Mir Dard Basti may survive, but in a different form.

The spirit of the ghetto