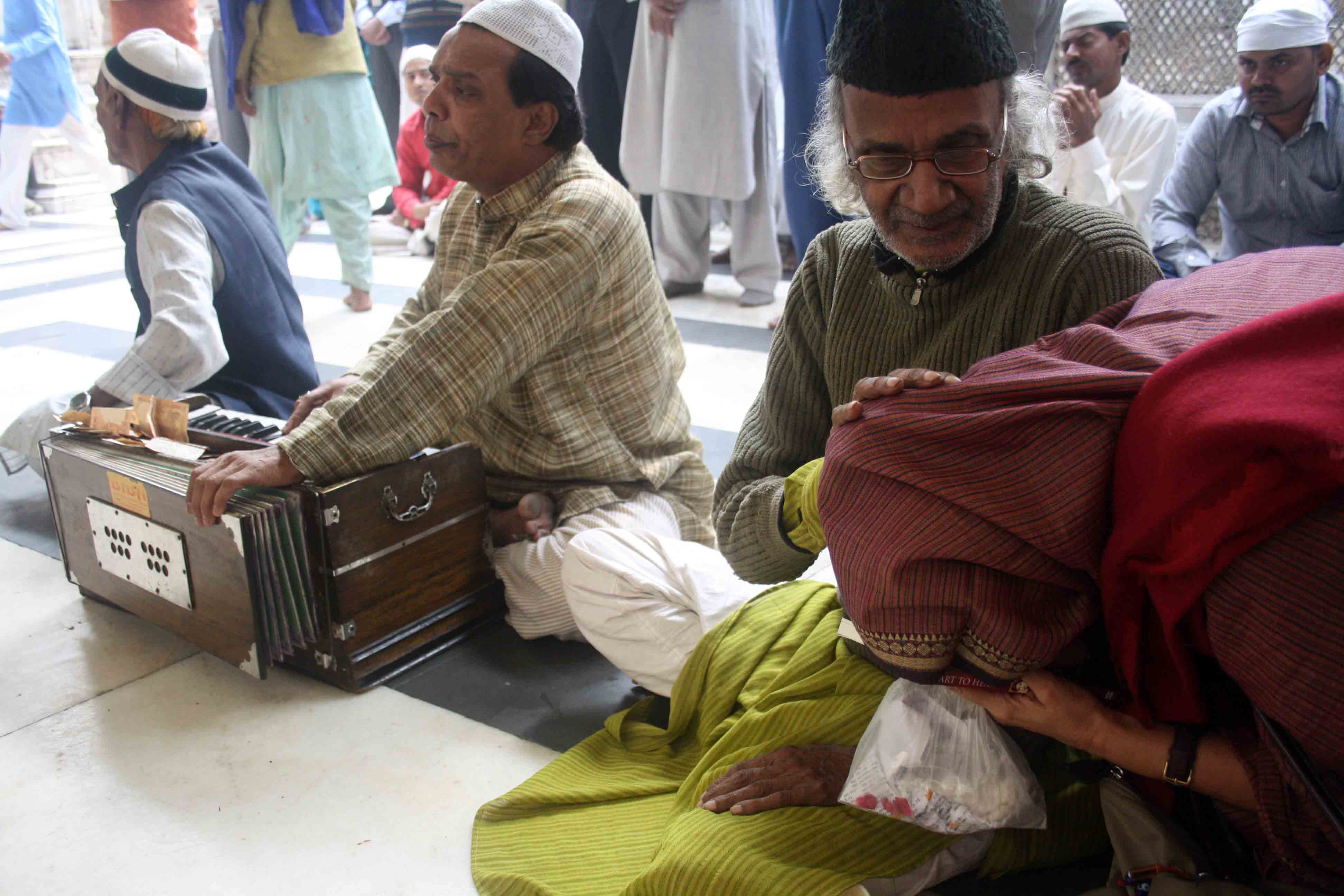 Ms Rao was carrying a copy of Heart to Heart: Remembering Nainaji, a book on her life with her late legendary guru. “I want to present it to Hazrat Nizamuddin,” she said. “The book will be launched tomorrow evening at India International Center.”

On stage, Ms Rao turns into a free spirit. She closes her eyes, sways her head, moves her arms; her face dissolving into expressions of longing and grief, or into a naughty smile as if she is teasing a lover. These could be the tactics of a tawaif, a courtesan.

In the book, Ms Rao writes: “‘The tawaifs sang thumri the way they did because of their experience of life,’ Nainaji tells me. ‘Only someone who knows that love is doomed can sing that way, can bring to her singing the knowledge of such pain…’ Then, looking at me, her eyes grave, Nainaji tells me: ‘Never be ashamed that you sing a form that was once sung by these great women. Always bring to your singing the memory of those women and their pain. Be proud that you are heir to that extraordinary, though much misunderstood, tradition.’”

Unlike other strands of Hindustani classical music that stress the correct interpretation of ragas, thumri manipulates these melodies to intensify the emotional impact of poetry. Many compositions were created for the Kathak dance in 19th century Oudh by tawaifs, who employed both expression and movement while singing.

Making her way through the basti, a village that has sprung around the shrine, Ms Rao stopped at Urdu poet Mirza Ghalib’s tomb. “I need his blessing too.”

Ms Rao’s memoir has many themes: evolving tradition, social changes, and the progress of a music form. These are interlaced with the story of a restless aristocratic woman and how she influenced the author’s life.

Born in a bhadralok family of Bengal and married into the royal family of Kapurthala (now in Punjab), Naina Devi found her calling in the music of tawaifs. Singing was part of daily life in her childhood home; her aunts knew the popular thumris and bandishes. But music was banned at her husband’s house; the only ragas heard were at the mujras held on weddings and births, when tawaifs were invited. Once, hiding behind a screen, Naina Devi witnessed the famous Benazir Bai perform a dadra.

“Now Benazir stops. The tabliya takes up the laggi, and the sarangiya plays the mukhra to this faster-paced sequence that comes at the end of the dadra. Benazir Bai begins to dance, not just bhav, not just with eyes and hands, but the scintillating, swift footwork—the laris and chakkars of Kathak. The men in the audience exclaim ‘Wah! Wah!’ and shower Benazir with coins and jewellery.”

Walking amid the pilgrims and beggars, Ms Rao said, “Nainaji had great faith in Sufism and felt herself connected to the Chishtia sisila (order). So it was important for me to bring her in the form of this book to the feet of Mehboob-e-Ilahi (Hazrat Nizamuddin).”

Another day, Naina Devi had told Ms Rao of a tawaif who caused a scandal by marrying into her husband’s family: “Zohra Begum was shunned and ostracized, never allowed to forget who she was. I felt sorry for her, alone amid hostile in-laws. And I felt sorry for her especially because she had given up the life of an artiste—the absorption in riyaz (practice sessions), the performances, singing, dancing, basking in the admiration and the gifts that men laid at her feet. She had given up all that, exchanging it for the stolid security of marriage.”

Ms Rao tells us in the book that Naina Devi blossomed into a singer only after her husband’s death, when she settled down in Delhi in the 1950s. This was a time of cultural shift in Hindustani music. The era of courtesans was ending; old avenues of patronage had disappeared with the nawabs and rajas. All India Radio (AIR) was the new sponsor. Music schools were opening up and artistes were starting to perform in concerts. Classical music was reaching the middle class. It had its impact on thumri too.

The courtesan tradition jarred with the new notions of Indian womanhood; music had to be rescued from the nautch girls. Only legally married women could sing for AIR. B.V. Keskar, the minister for information and broadcasting, is quoted in the book as saying, “No one whose private life was a public scandal would be patronized.” Thumri linked the singer to kothas (brothels) and tawaifs. Naina Devi never used her real name, Nilina Ripjit Singh, in her new avatar.

Besides administering a music school in the Capital and planning music programmes for AIR, Naina Devi went on to hone her skills as a disciple of Ustad Mushtaq Hussain Khan of the Rampur-Sahaswan gharana. She performed in concerts across the country and was awarded the Padma Shri in 1974. Her disciples included Shubha Mudgal, Madhumita Ray and the author.

Before entering the dargah, Ms Rao bought four rose garlands, two perfume bottles, and two chaadars to offer at the shrine. The stall owner gave her tea. He drank from the cup; she drank from the saucer.

After finishing her prayers, Ms Rao sat in the courtyard and listened to a qawwali by Meraj Ahmed, one of the world’s greatest living qawwals. She too started singing. One of the first dadras (Sudh aai re balam pardesiya ki…) that Ms Rao learnt from Naina Devi was taught to the latter by Begum Akhtar, who learnt it from Lachhu Maharaj, who had in turn learnt it from Kathak maestro Kalka Prasad. Knowledge was passed from one to the other through seena-ba-seena, a tradition where a disciple absorbs not just the music’s technicalities but its whole inner world from her guru, and in turn passes on that wisdom to her disciples. Translate the phrase into English and it becomes the book’s title, Heart to Heart.

Before getting up to leave, Ms Rao touched Meraj’s feet in respect; he blessed her by affectionately keeping his hand on her head. It was a beautiful moment.