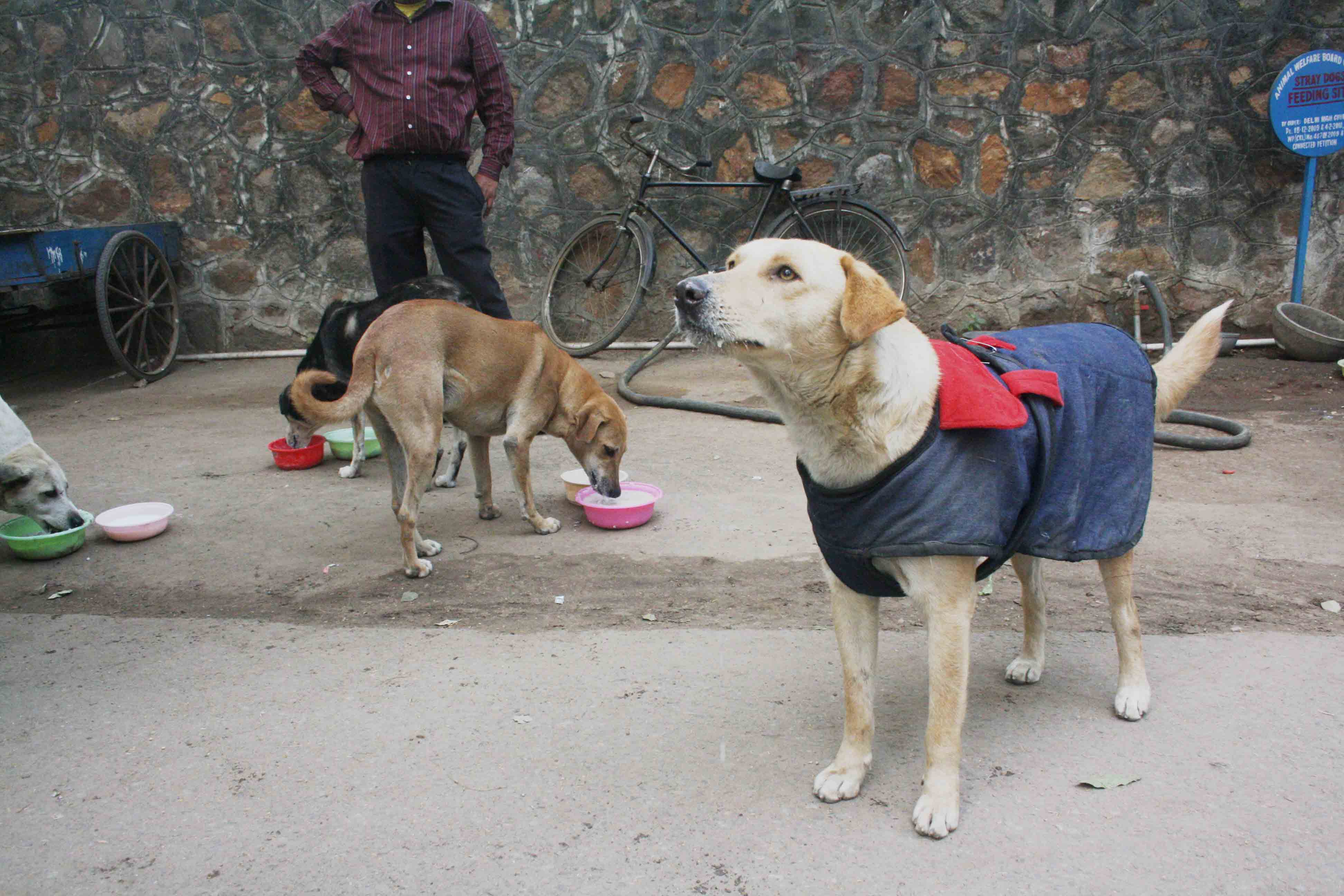 Nosering, Sweety, Kaajal and Sudama are sitting close to a Mother Dairy booth in Vasant Kunj, New Delhi. It’s 3pm, and Sonya Ghosh is expected. An associate professor of English at the University of Delhi, Ms Ghosh arrives daily in a Maruti van carrying six pails, two buckets and 20 plastic bowls. Driving through sectors 3 and 4 of Vasant Kunj, she feeds 25 dogs, including the fat Bullah and the old Kaali.

Milk, rice, daliya, soybean, pumpkin and chicken waste — all cooked together — is the meal Ms Ghosh serves stray dogs at India’s first designated dog-feeding sites, set up in 2009. Today, the Capital has more than 100 feeding sites for stray canines. No other Indian city has such a facility.

“Some people praise me,” Ms Ghosh tells The Delhi Walla, filling up a bowl for the brown Marina who was abandoned by her owners. “Some consider me a crackpot. Others think I’m making money. But it’s coming from my salary.”

The credit for setting up the dog-feeding sites goes to Ms Ghosh and other activists. Harassed by some for taking care of stray animals, they had filed a petition in 2009 in the Delhi high court. Over the next two years, the court gave them more than they had expected. Not only did it order police protection for volunteers feeding the dogs, it also directed the Animal Welfare Board of India (AWBI) to select dog-feeding sites in various neighbourhoods and decide on timings, along with the resident welfare associations (RWAs) and the local police. The court disposed of the case in December 2011.

“We are forming committees of board members and volunteers to designate sites across Delhi,” advocate Anjali Sharma, an executive committee member of the AWBI, told me on phone. Every locality can have more than one spot. The Jawaharlal Nehru University (JNU) campus has 15 sites; Vasant Kunj, 17; Golf Links, seven.

Explaining why this initiative is confined to Delhi, Ms Sharma says: “Some RWAs in the city have become overbearing. It’s because of the wrong belief that giving food would make the dogs violent, RWAs don’t let residents feed the animals. Occasionally, things get nasty, even violent.”

This doesn’t mean that dogs cannot be fed if your neighbourhood has no feeding spots. Ms Sharma, who lives in Noida, adjoining Delhi, feeds 17 stray dogs daily. This inspired other residents. With increased interaction, it became easier to catch dogs for sterilization and vaccination. In three years, the dog population in Ms Sharma’s locality has come down from 70 to 40.

Until the early 1990s, a dog was either taken to the New Delhi Municipal Council’s veterinary hospital in Moti Bagh to be electrocuted, or teams from the MCD would poison the stray, taking it away in a refuse bag.

The killings stopped after the Delhi high court ordered sterilization instead in 1992. Today, after sterilization and immunization, the stray dogs are released at the same place from where they are picked up. This is more in the spirit of Article 51 A (g) of the Constitution, which makes it a fundamental duty for citizens to show compassion to all creatures.

Across the city, there are non-governmental organizations (NGOs) and individuals who are taking care of strays. “We pick the injured and sick from the streets and treat them,” says Rajender Singh Negi, shelter manager of the Pet Animal Welfare Society, Masoodpur, which has 80 dogs. Every day Mr Negi gets two-three calls about old or diseased pets being abandoned by their owners on the streets. On Christmas, Mr Ramesh, a security guard at an ATM in the posh Satya Niketan area, found a newborn puppy on the road. It had two legs. The puppy was sent to Mr Negi’s shelter and was then adopted by Anjali Gopalan of the Naz Foundation. The puppy has been named Pari.

In 2010, a young couple, Tushar and Pooja Agarwal, drove from London to Delhi and raised Rs 2 lakh for the animal welfare NGO Friendicoes Society for Eradication of Cruelty to Animals. On their blog Londondelhibyroad.com, they wrote, “We hope to… spread the message that cruelty to animals is not acceptable.”

Back in Vasant Kunj, Ms Ghosh sees no dogs at a site at the corner of D-4 block, and blows the car horn. An obese dog appears immediately. “That’s Brownie No. 2,” she says. “He has been fattened by shopkeepers.”

The shopkeepers in the area’s market have bonded well with dogs. The tailor, Vijay Kumar, gives Tiger biscuits to dogs. At Priya Drycleaner Walla, they get Parle-G biscuits. The boutique lady keeps milk for Bimbo, her favourite. The cooks at the Frontier Foods takeaway stall throw leftovers to dogs. Some customers order tandoori chicken specifically for them. At the Gulzar Chicken and Mutton shop, Jumbo prefers mutton trimmings.

But stray dogs are still feared. In JNU campus, home to a large number of strays, the cases of dog bites grew so serious last year that a group of blind students took out a protest march in September 2011. The same year, 22 patients at the All India Institute of Medical Sciences were bitten within a single month by stray dogs loitering on the hospital premises. Similarly, outsiders in upscale Nizamuddin East are scared to walk at night. The dogs growl at them. One morning in 2009, 18 dogs were found dead, poisoned deliberately, according to some residents.

“We still have about 100 dogs,” says Mr Rohtas, a night guard in Nizamuddin East. Pointing to a dog snuggled on a blanket, he adds: “They bark only at strangers. Food comes to them from four or five bungalows twice a day.”

In the same neighbourhood, every evening, Outlook magazine editor Vinod Mehta throws biscuits to stray dogs outside his apartment building. His own pet, which he found in a ditch in Gurgaon, is said to be partial to imported cheese.

Caring for animals is not only a trait of the privileged. Mr Ramesh, a labourer who sleeps on the Mathura Road pavement, lives with a street dog he calls Kaali. Patting the black dog, he says, “I may go hungry, but I make sure that Kaali gets her roti every night.” In the morning, before leaving for work, Mr Ramesh feeds her bread and milk.

Such caring brings out some of our contradictions. In a city that has thousands of malnourished people, we now have feeding sites for dogs. “Each species has a right to shelter, security and food,” says Ms Ghosh.

The feeding sites need not be limited to Delhi. Ms Sharma says, “Though the Delhi high court does not say that dog-feeding sites have to be set up in other cities too, its order has persuasive value over the rest of India.”

In Vasant Kunj, Ms Ghosh, who has fed all the dogs, is returning home. Sweety is sitting alone at a feeding site, perhaps waiting for a certain Mr Mazumdar, who lives in the adjacent building, who might feed her later in the evening. The stray dogs of Nizamuddin East