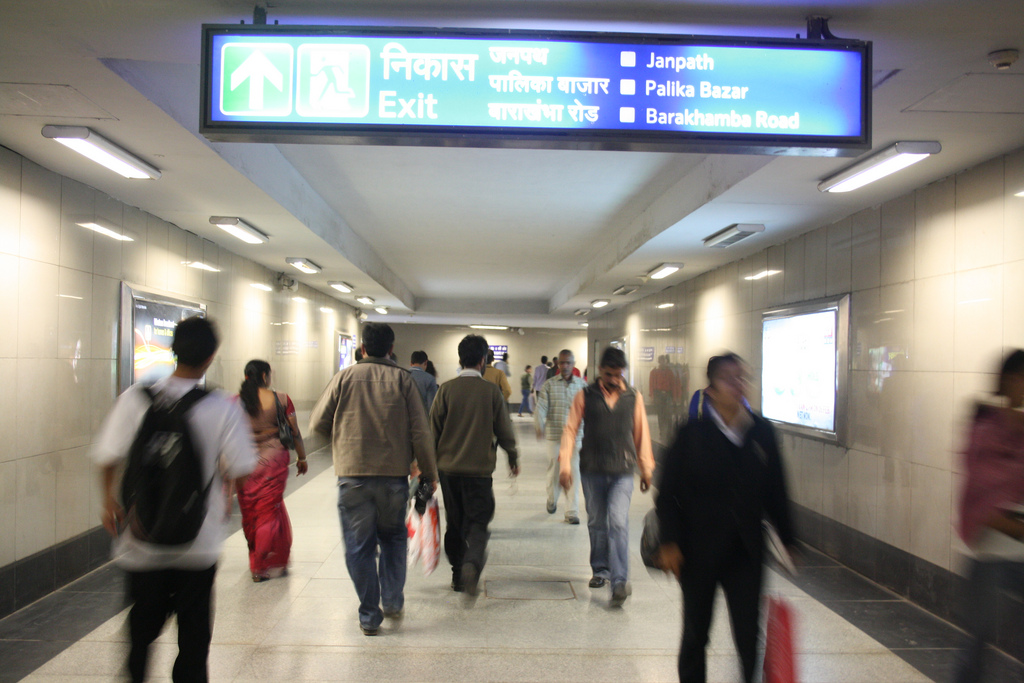 Delhi Metro – Love on the Tracks, Around Town Romance in the subway.

This msg is for cutie pie who boarded Metro from Pitampura on 2 February around 8.30am & left at Sec 16 Noida station. She was wearing blu jeans & black levis tee. U were looking gorgeous. I am the guy standing near u. Is there any chance of new frnd. If you too liked me, reply me.

— A message on “Dil Se”, a classified section in the HT City, Delhi, supplement of Hindustan Times.

A train pulled into the yellow line underground Metro station at Rajiv Chowk, below the bustle of Connaught Place. The doors opened. They entered. The doors closed. The train moved. Leaning over her in the crowded compartment, his blue-green eyes resting on the beauty spot on her left cheek, he said, “I want to coat you in honey.”

She laughed, saying softly, “All the uncles and aunties are staring at us.”

Anayana wishes to keep her romantic life a secret. She talked to The Delhi Walla on the condition that I change her name. The 23-year-old knows that her relationship could end in nothing. She is a marketing analyst, he is a PhD student. She is Kashmiri, he is French. Her conservative parents might never agree… to what? She met him at a Metro station. He would eventually return to his country. Can a long-distance relationship survive?

One February evening, pointing to the little circle that indicates Rajiv Chowk on the Delhi Metro route map, Anayana says: “I first saw Laurent (name changed on request) here.” It was 11 am, nearing the end of rush hour, but still crowded enough at Delhi Metro’s biggest junction station, which is rarely anything but a blur of fast-moving bodies. “I was walking towards the exit near my office,” Anayana recalls. “Laurent was with a friend who was telling him that Delhi is designed at right angles. I don’t know what came over me… and I said, ‘No, Delhi is a circular city.’ He smiled at me; I smiled too. Stepping out of the L-block exit, I gave him my visiting card.”

The origins of this love story can be traced back to 1998, when the construction of the Delhi Metro began. In 2012, the subway system has 200 trains running on 190km of tracks daily from 6am-11pm, carrying around 1.8 million commuters every day.

The Metro has changed the way Delhiwallas tackle their city. The Capital has arrayed itself into a rainbow of lines – red, yellow, green, blue, violet and orange. The pillars under the elevated Metro tracks serve as landmarks and, on occasion, as a guiding system for lost sheep, e.g. “Haven’t reached yet? Just follow the Metro, and turn left at pillar No. 125. The wedding venue is right opposite.”

The Metro track also marks the boundary between stifling tradition and relative liberty. At least one Bollywood film has documented that the modestly dressed girls of Old Delhi fling off their veils as the train leaves the Chawri Bazar station.

That the Metro is convenient for more than just commuting became evident in 2011 when a management student launched MetroMates. The website helps travellers find love on the tracks. “The idea of MetroMates came when I noticed people staring at each other, wanting to strike up conversations but not knowing how to do it,” says Sameer Suri, 25, who started the dating service with his brother Harsh. It has more than 8,000 registered users.

In the old days of getting from A to B, Delhi’s Blueline buses were romantic only in films like Dil Se.. (1998) and Sarfarosh (1999). In real life, they were dreaded for rash driving, overcrowding, jostling and groping. Usually, if a girl locked eyes with a man on the bus, it meant she was glaring at him.

Anayana, who commuted in buses during her college years, says: “I looked ugly on buses, but look like a babe on the Metro. You also smell better. You reach on time and have fewer fights with your boyfriend.” Praising the anonymity of the Metro, she says, “If I’m spotted with a boy in an autorickshaw or on a bus, I might be in trouble. But if I’m seen talking to Laurent on the Metro, I can always say I met a friend on the train.”

In January 2012, Hindustan Times Group launched a product targeting Metro commuters like Anayana. A little smaller than an A4 size paper, HT Mini is for those who, according to Vasantha Angamuthu, HT special projects editor, don’t have the physical space to read a traditional broadsheet or a tabloid newspaper. Describing the paper as a conversational sparkler, Ms Angamuthu says, “If you are travelling on the Metro and you need a pick-up line, you can quickly glance at the Mini, scan all that has happened in the past 24 hours and approach the object of your affection, asking her or him, ‘Did you read the bit on Vidya Balan?’

The malls and multiplexes in the vicinity of Metro stations have become popular meeting points for people in love. Some action can also be spotted right inside the coaches. It is far from unusual to see youngsters holding hands, whispering into each other’s ears and sometimes even embracing. A TV ad for a toothpaste has a couple pretending to kiss in what looks like a Delhi Metro compartment. A discreetly shot YouTube clip that shows a pair kissing each other on the Metro has received more than 1,00,000 hits. Smooching is still an extremely rare sight on the trains but, as the Dil Se classified proves, relationships are budding in the general compartments.

“The daily proximity and exposure to each other helps build a relationship, which could bloom in an office café, a college canteen or on the Metro train that you catch daily at 10 am from Rohini,” says Samir Parikh, chief psychiatrist at Max Healthcare. “The Metro is air-conditioned, more comfortable, and has commuters from all walks of life, which makes it easier for you to find someone like you.”

Ex-radio jockey Rochie Rana, 31, made a friend in March 2011 when she took a train from Saket. “This American was sitting next to me. I was reading a Murakami, which gave me a good excuse to banter with him (‘Have you read Kafka on the Shore?’). Soon, we started traipsing the city together.” In this too the Metro helped them. “We regularly met at the Nehru Place station, where we would stand in front of the Metro route map. He would put his finger randomly on some spot and we explored it that day.”

IT professional Sumanta Roy, who blogs at OMGDelhi, likes people-watching on the violet line that connects Central Secretariat to Badarpur. “The most handsome commuters are from south Delhi, and many of them go to Khan Market in the violet,” he says. “Once a dashing-looking man, while parking his Mercedes at Moolchand Metro station, offered to treat me to a drink. I was flattered.”

However, it’s the blue line that has the most attractive passengers, according to an online Train of Love survey conducted by the MetroMates website in January 2012. In the survey – which included inputs from around 300 Metro commuters – 48% of the respondents voted for the “lookers” on the blue line, 39% disclosed they look for friendship on the trains and platforms, 22% look for dates, and 10% for love. Some 37% of them said they like staring at beautiful fellow travellers, 87% said they are attracted to other passengers, but only 7% could muster the courage to actually talk to someone they liked.

Anayana and her Frenchman would often go to a library in Civil Lines. Since Anayana lives in Noida, she takes the blue line, while Laurent, a resident of Greater Kailash-I, comes north on the yellow line. They avoid Kashmere Gate because Anayana’s ex, with whom she broke up last year, uses that junction to change his connection for Pitampura.

Priya Bhattacharji, a 24-year-old brand consultant working in Sainik Farms, is practised in what she calls “passive interaction with good-looking boys”. She says, “In the underground stretches, it’s dark outside the windows, so you stare at all the eye candy. They know I’m looking, but — and this is the best part — these boys don’t make me feel self-conscious.”

Surrounded by commuters, Laurent said the most unlikely things to Anayana. “Once he told me that he wants to run a brothel on socialist principles,” she says.

Every night, Anayana gets down at the Noida Sector 15 station. If she is late, she calls her father as the train reaches Yamuna Bank, four stops from home. “I don’t want to think of the day when I would have to tell mummy-papa about Laurent,” she says, waiting for the home-bound train at Rajiv Chowk. “But he is now in France and will come back late in the year. I don’t know whether what we have between us can last for long. But I’m happy.”

The train arrives. The recorded voice announces, “Please mind the gap.” The doors open. Anayana gets in. The train pulls out.