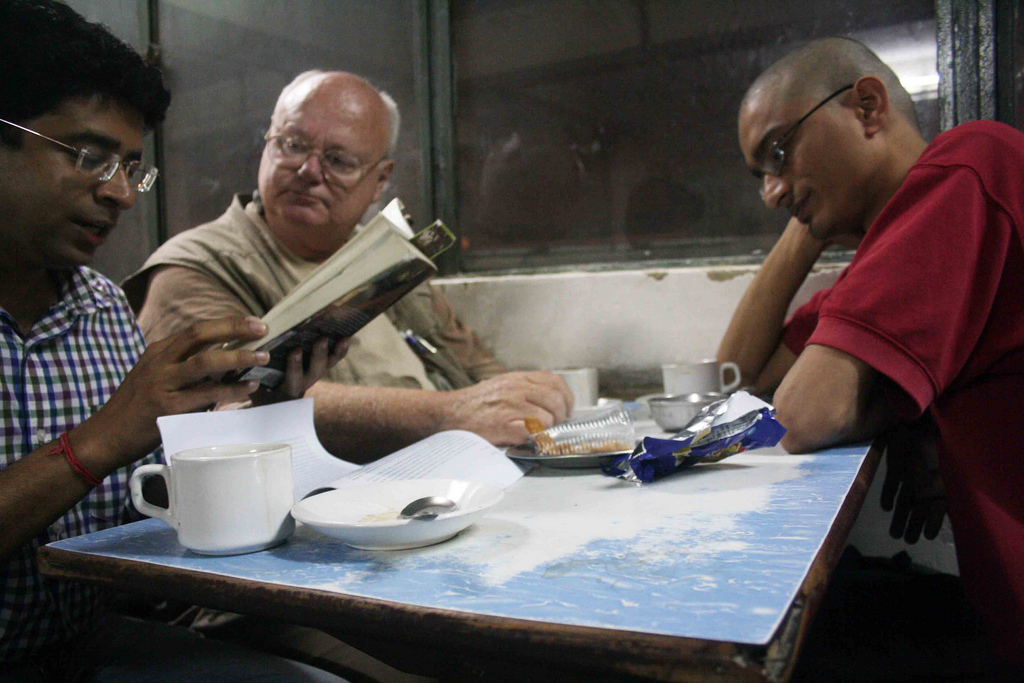 Today is the 12th meeting of The Delhi Proustians, a club for Delhiwallas that discusses French novelist Marcel Proust. Every Monday evening for an hour we read his masterpiece, In Search of Lost Time.

It is 7.18 pm and The Delhi Walla is with three fellow Proustians. Abdul Muqhtadir, a law student in Delhi University. Sourabh Gupta, a writer from Noida (once again he has come with oatmeal biskuts!). Richard Weiderman, a retired teacher from Grand Rapid, Michigan.

Actually, we can’t call ourselves Proustians.

Collins dictionary defines the term as an adjective (“of or relating to Marcel Proust, his works, or his style”) and as a noun (“an admirer of Marcel Proust’s works”).

Mr Weiderman, a Jack London fan who is returning to the US this week, says he has no plans to pursue Marcel. Mr Muqhtadir talks about devoting his waking hours for his approaching exams. Mr Gupta, it must be agreed, is serious about Proust. But his wife has just given birth. He must be busy helping her change the child’s nappies at night.

Marcel is a tough nut to crack.

Seven volumes are too much.

And sometimes the devil whispers to me, saying, “Come on, life’s too short, monsieur. There are other important authors to tackle. Why waste time on Proust?”

But I must do Proust.

I order coffee for all of us.

“Why is it necessary for you to do Proust?” asks Mr Weiderman.

“Because,” I say, “my life has become a slave to instant gratifications. The newspapers fawn about a new book. Of course, I must buy it. The critics praise a new movie. Of course, I must watch it. Everyone is listening to a new film song. Of course, I must download it. The cycle continues in an endless loop. The new books distract me even before I could finish the previous bestsellers. Where are the long-term commitments? Marcel is helping me to focus. He is a test of my moral faculties. If I stick on with Proust, I might even have a lasting and loyal relationship.”

Mr Gupta flips through my paperback copy of Proust. Swann’s Way is the first volume. This edition is translated into English by awarding winning translator Lydia Davis. “The fonts are too tiny,” he says.

Taking the copy from him, I say, “Let me read a passage.”

Mr Muqhtadir is all attention. Mr Gupta folds his arms and looks towards me as if now nothing can divert him. Mr Weiderman appears to be (secretly) chuckling.

I say: “This passage is about a water lily. It has only five sentences. I have read it many times. There are occasions when I get its meaning in one go. Sometimes, however, it goes over my head. And though it is dense, there is something… some fleeting beauty about the passage that makes me want to continue with Marcel, no matter how scary the task seems. Now, please listen.

Soon the course of the Vivonne is obstructed by water plants. First they appear singly, like this water lily, for instance, which was allowed so little rest by the current in the midst of which it was unfortunately placed that, like a mechanically activated ferry boat, it would approach one bank only to return to the one from which it had come, eternally crossing back and forth again. (That could be my poor life!) Pushed toward the bank, its peduncle would unfold, lengthen, flow out, reach the extreme limit of its tension at the edge where the current would pick it up again, then the green cord would fold up on itself and bring the poor plant back to what may all the more properly be called its point of departure because it did not stay there a second without starting off from it again in a repetition of the same maneuver. (Such exacting description! I love it!) I would find it again, walk after walk, always in the same situation, reminding me of certain neurasthenics among whose number my grandfather would count my aunt Léonie, who present year after year the unchanging spectacle of the bizarre habits they believe, each time, they are about to shake off and which they retain forever; caught in the machinery of the maladies and their manias, the efforts with which they struggle uselessly to abandon them only guarantee the functioning and activate the triggers of their strange, unavoidable, and morose regimes. (So far, so good, right?) This water lily was the same, and it was also like one of those miserable creatures whose singular torment, repeated indefinitely throughout eternity, aroused the curiosity of Dante, who would have asked the tormented creature himself to recount its cause and its particularities at greater length had Virgil, striding on ahead (what’s happening?), not forced him to hurry after immediately, as my parents did me.

We are quiet. The steward appears. “Today,” Mr Weiderman says, “ the coffee is on me.”

Not scared of Marcel No madeleine, but biskut We Proustians (photo by Sourabh Gupta)