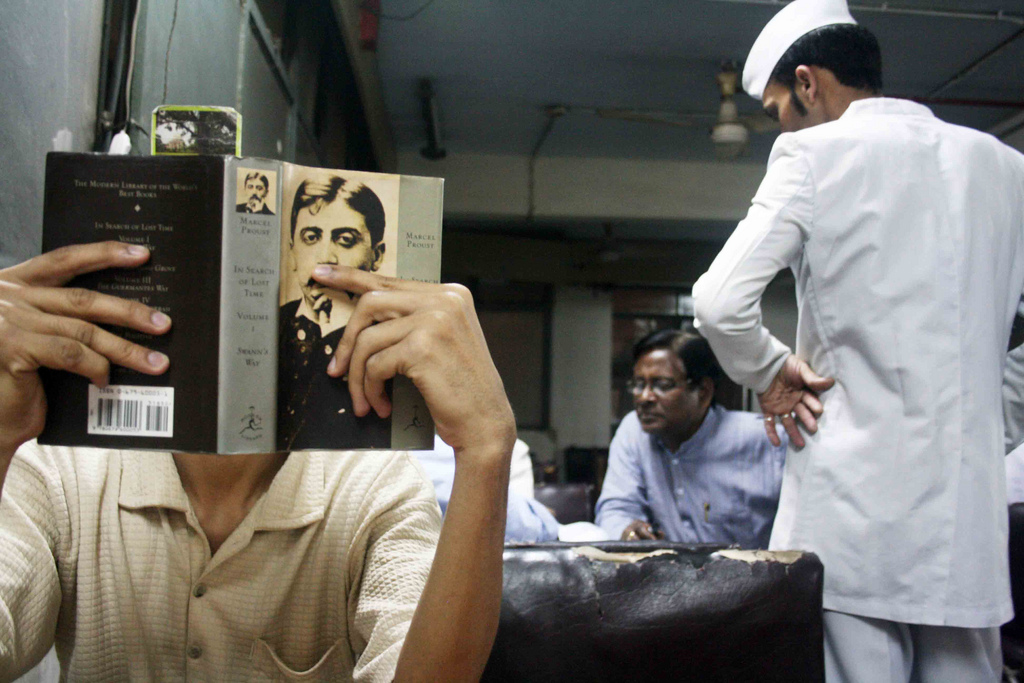 ATTENTION: Due to unavoidable circumstances, the 15th meeting of The Delhi Proustians will be held on 2 April 2012. The inconvenience is regretted.

Today is the 14th meeting of The Delhi Proustians, a club for Delhiwallas that discusses French novelist Marcel Proust. Every Monday evening for an hour we read his masterpiece, In Search of Lost Time.

It is 7 pm and The Delhi Walla is alone.

I’m nearing a milestone. Swann’s Way, the first volume, has three parts. If I concentrate, I might finish Combray, the first part.

Thus would I often lie until morning, dreaming of the old days at Combray, of my melancholy and wakeful evenings there, of other days besides, the memory of which had been more recently restored to me by the taste…

… Not a single soul has arrived yet. Maybe no one will arrive. Nobody in Delhi is interested in Proust. Perhaps some are… but why should they come here? Most passages in Lost Time are so convoluted. If you don’t pay attention, you have to reread them again and again to get their meaning and that’s an exercise best done alone in your study. This club is, of course, about reading Proust but it is also talking about him and… talking about life, our lives. But I guess I’ll be reading alone…

… real fissures, real geological faults, at least that veining, the variegation of colouring, which in certain rocks, in certain blocks of marble…

I’m joined by Abdul Muqhtadir, a law student in Delhi University. He is becoming a regular but he hadn’t come the previous week. “A few minutes before leaving for the Indian Coffee House,” Mr Muqhtadir says, “I logged on to my computer and was reading the details of our last meeting on The Delhi Walla and was dismayed to discover that you were not convinced I might be able to pursue Proust because of my approaching exams, so I thought what’s the point of attending the club’s reading… ”

Taking out a printed sheet, I say, “I downloaded from the internet a New York Times report on Marcel. It was published in 1922, a few days after his death on November 19. Will you please read the second paragraph?”

Mr Muqhtadir takes the sheet from me.

Although 51, it is only within the last few years that M. Proust became known to the English and American literary world. More than any of his contemporaries, M. Proust will go down to posterity as the author of one book. It includes five parts which have appeared in French, and two others have been announced as being in press. Described as an “anatomist of society”, his series of connected works are marked by originality of thought in contemporary psychology, slow, relentless and pitiless dissection of the human mind. His work has won passionate admirers and ardent disciples. The younger critics of France regard him as a master, and Marcel Proust societies have been formed in England and Holland.

“And now a Marcel Proust society exists in India too,” I exclaim.

Mr Muqhtadir says, “The bit on Proust being an “anatomist of society” is specially appropriate. I also agree that he was very good in dissecting the human mind. Take RK Narayan, our author from South India. What he would have dismissed in two lines could have been easily handled by Proust in two pages.”

“And it’s possible,” I say, “that those two pages might have consisted of just one sentence!”

Gently moving his head, Mr Mughtadir says, “Proust knew how to explore the mind, its exactness.”

Due to unavoidable circumstances, the 15th meeting of The Delhi Proustians takes place on 2 April 2012. The inconvenience is regretted. Sometimes the fragment of landscape On Proust, the anatomist of society