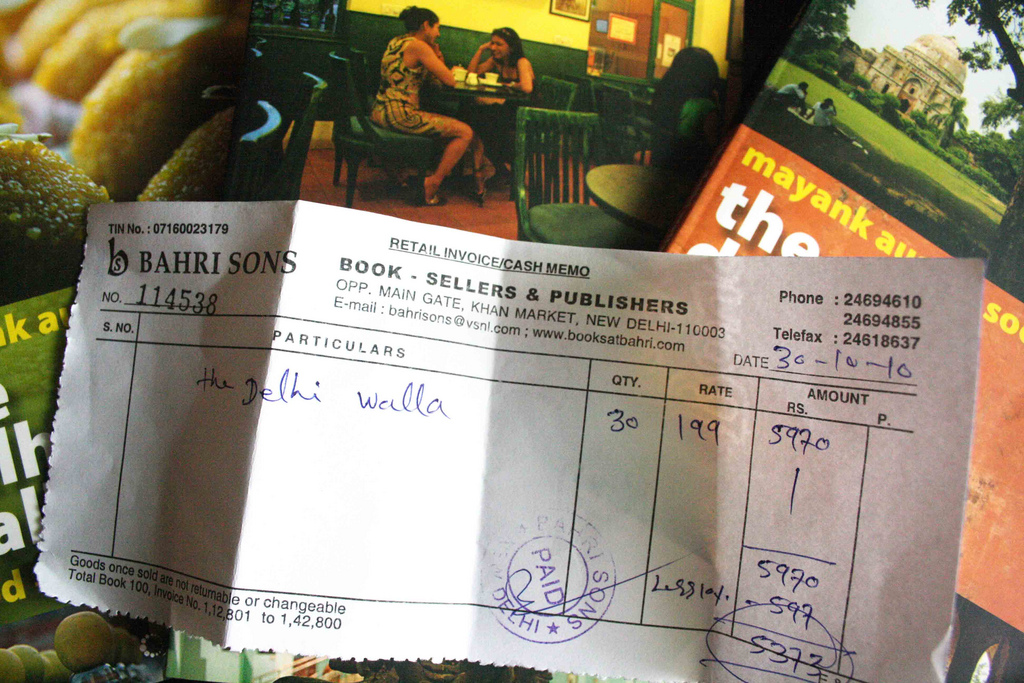 The Delhi Walla Books – Considered by The Friday Times Effortless expedition into the city.

Certain things get delayed beyond redemption. And one of these slipped covenants with myself was the sheer pleasure of writing about four short but enticing booklets on Delhi.

My deep interest in Delhi began more than seven years ago when I visited the great capital for the first time. No, it is not the adoration of what Delhi has become after 1947, but its grand past and how it continues to live on despite the ideological shifts in the Indian republic. For Pakistanis and Muslims of the subcontinent Delhi has a special relevance. It was the seat of power and that cannot be the only pleasant memory of a city. However, it is the people of Delhi who have interested me the most. Be it the medieval Sufis and musicians or the Khayal maestros of the 18th and 19th centuries or the greatest Urdu poets, Mir and Ghalib. A bit of Delhi lives in all of us.

As I ventured to know more, the city opened up like a grand old book with so many mysteries and meanings. I was lucky that among others Mayank Austen Soofi was a companion on several of my trips to the capital.

Soofi is a true devotee of the city. When he moved to Delhi, he quickly found out the city within. As he turned into a flâneur, he became aware of the several hidden corners and layers of this extraordinary city and his wanderings continue. Soofi’s blog is a most useful and readable online resource on contemporary Delhi, not surprisingly entitled “The Delhi Walla.”

Funny as it may sound, it was through his blog that I first met Soofi in the visa-free cyber space. As his books and features on Delhi gained traction and popularity, his future path had been set. Soofi had always wanted to be a writer and what could be more gratifying than to write on the city that has consumed all his energies and passion.

I still recall his excited emails when he started to write these parchments on a boundless metropolis. Over the succeeding months, I discussed several portions via email and gave my two pence advice when needed. The drafts were generally blemish-free and when I had nothing to add, Soofi would get angry and accuse me of not taking an interest. These books appeared for the first time in the backdrop of the 2010 Commonwealth Games, which were organized with much hullabaloo, media criticism, and stories of corruption.

While Soofi’s books are an excellent introduction to Delhi for visitors and travelers, they are also rich for the residents of the city. The first booklet on Delhi’s monuments is an effortless expedition into the complex history and its remains present everywhere in the city. Rarely have I seen a short guide written lyrically yet sparsely on the rich heritage of Delhi. It would be useful to mention that on his quest to become a writer Soofi became a photographer first. This particular strength is apparent from the writing as the style gives a visual portrait of the monuments that are covered in the booklet. For the absolute pleasure of the reader, the text is supplemented by some stunning images. And this is the case with all four booklets.

The second publication is on ‘hangouts’ – more contemporary and hip but covering a fine range of Delhi’s timeless soul, from upmarket cafes to other places which yuppies may not find exciting but would interest thousands more people wanting to know Delhi.

The third book, which is my favorite, is on ‘food + drinks’ wherein the delightfully diverse cuisine of Delhi is laid out before hungry eyes. In terms of writing about food, this is a fine effort; it presents the rich galaxy of Delhi delights in just a few thousand words. As a foodie myself I will ensure that I keep my copy with me on my next trip to Delhi. I still have to cover many of the joints that Soofi has painstakingly identified and covered.

The fourth guidebook is entitled “Portraits” and captures many well known and not so well known residents of Delhi and offers a kaleidoscope of the multi-ethnic, multicultural pluralism of the capital. Some of these portraits are pretty gripping. Soofi tries to be offbeat and avoids the cliche of the photographic medium itself. This is why the collection works.

A few stylistic comments are pertinent here. Whereas Soofi’s taut writing is both entertaining and informative, at times the style slips into an orientalist format. In part this could be the result of Soofi’s own discovery of Delhi or the influence of other writers who have written on Delhi. Partly it is also reflective of the dilemma that the younger generations in South Asia face today: erasure of heritage from public memory and discourse. This is not just applicable for the young men and women of India, but more so for those in Pakistan and even Bangladesh. These young nation states with ancient histories have churned out selective narratives to justify their nationhood[s]. Commercialization has ensured that material success and consumption take precedence over everything else. This is why at times one gets a faint impression that Soofi is writing about his own adopted city as a bit of an outsider. Perhaps I’m reading too much into his compact writing and the imperatives of the publishing industry to sell these books to visitors of Delhi. Having said this, there are flashes of good writing and clever images throughout the narrative in these four booklets.

I must confess that these booklets have impacted the way I have imagined Delhi as a visitor. For my rather narrow focus on Delhi’s Muslim history (which I intend to inflict upon readers in the form of a book later in 2012), Soofi has given a more contemporary feel and photo-reality to my understanding of the city.

Soofi’s loving parents wanted him to be a corporate shark or at least someone who would conform to the standard-stable-job-holding son. They were extremely anxious when he chose the path of being a writer. In fact when I met him for the first time he was unsure himself and wondered if his literary forays would bear fruit. With these books now published in the thousands and finding a prominent spot in most of Delhi’s bookstores, both Soofi and his parents must be proud of the swift transformation that has taken place.

I haven’t met Soofi in ages but I believe that he has completed his first non-fiction book on the lives of sex-workers on Delhi’s infamous GB Road. I read its first few chapters and then lost contact with the author. The initial chapters were quite engaging. I am keen to read the whole text when it is published. But I am sure that this forthcoming book will fulfill Soofi’s dream of being just a writer and nothing else.

I do hope that he succeeds and remains loyal to his camera and Mac notebook – the two instruments that help him achieve what he loves the most: self expression. Coming back to these guidebooks, I recommend all visitors to Delhi acquiring a copy the moment they land in the grand city. They are reliable companions. And I am not exaggerating.

[The author is Director, Policy & Programs, at Jinnah Institute in Islamabad. He is also the consulting editor at The Friday Times. His writings are archived at www.razarumi.com ]