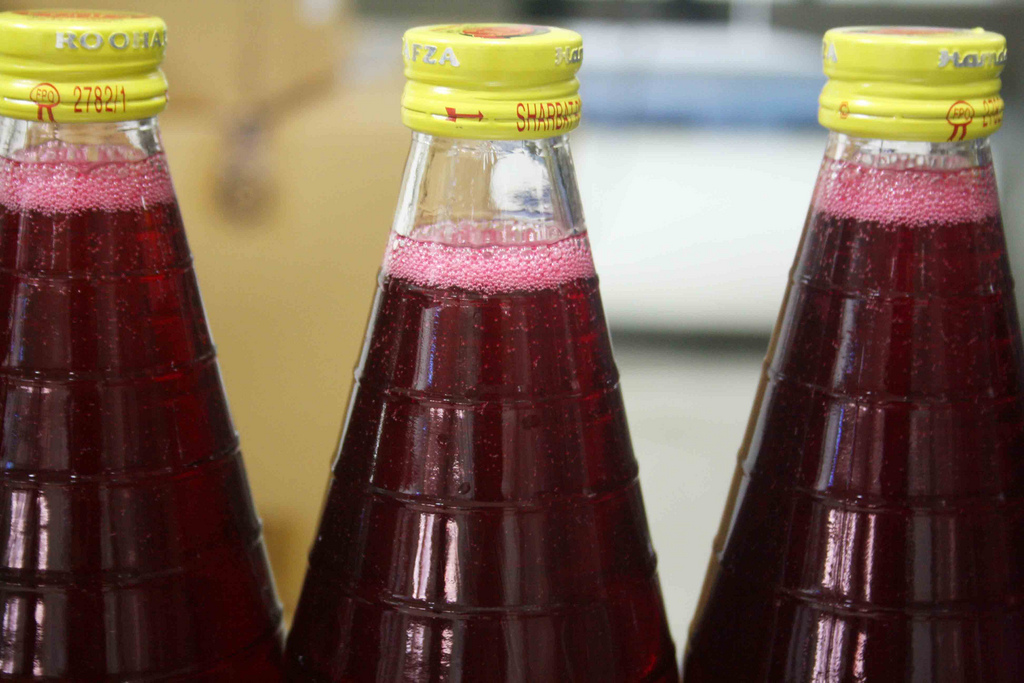 It is not a cola and it is not endorsed by Shah Rukh Khan – it has no brand ambassador. It also lacks ready-to-drink convenience. Most people born after liberalisation may not even know its name. But now 40 years older than Independence, it is still going strong.

Rooh Afza, the scarlet-hued refresher, might today have become as obscure as any dilapidated tomb in Old Delhi where it was founded in 1907. But this classic summer sherbet, or sharbat, has survived Partition, the licence-permit raj, economic reforms, carbonated drinks, and tetra pack juices. An old newspaper ad of this drink says, “When the motor car was on its way in and the horse buggy on its way out, Sharbat Rooh Afza was there.”

Now that the soot-spouting motor car is on its way out and clean, cool hybrids are on their way in, Sharbat Rooh Afza is still there. “Every year, we sell two crore bottles,” says Abdul Majeed, the director of Hamdard (Wakf) Laboratories, the Delhi-based manufacturer of the sharbat. “In fact, we have seen a 20 per cent increase in sales in the past four years.” Majeed is the great-grandson of Hakeem Abdul Majeed, Hamdard’s founder.

Founded as a small herb shop in Old Delhi, Hamdard makes natural products based on the Unani system of medicine, which derives its philosophy from the Greek physician Hippocrates, who believed in the healing power of nature and advocated that medicines be safe and gentle.

Like any lasting brand, Rooh Afza has passed through moments of anxiety. “There was a drop in sales in the late 1990s and early 2000s, and our share of the throat declined,” says Tarundeep Singh Rana, general manager, marketing, Hamdard. “Consumers were taken in by carbonated drinks and the Frootis of the world. Our brand needed to be reinvented and refreshed. We started new campaigns, got (actor) Juhi Chawla as our brand ambassador and established connections with resident welfare associations in cities across north India. Our drives have borne fruit. In the Rs. 400 crore market of powdered soft drinks and liquid concentrates, Rooh Afza’s share is 50%.”

It is no exaggeration to say that the older generations have grown up with Rooh Afza moments. “I have a love affair with Rooh Afza,” says Pushpesh Pant, author of the voluminous India: The Cookbook. “I first had this sharbat when I was a five-year-old, and I remember the experience to this day. It was gifted to my mother by her friend from Delhi, who was visiting our home in Mukteshwar. In just one sip, I tasted melon, pineapple and orange. There was a trace of rose and a hint of sandalwood. I found the drink to be a beautiful amalgam of traditional flavours and aromas.”

Calling it a “Heavenly Elixir”, the US-based Saveur magazine, considered by many to be the last word on authentic cuisines, ranked Rooh Afza No. 10 in its annual Top 100 food and drinks list from around the world in 2007. The sharbat occupied the first place in the drinks category.

The absence of artificial flavours, fat and cholesterol in the drink have become its USP in media campaigns. Promoted as “the healthy alternative”, the print ads of the sharbat with “natural cooling herbs” ask us to “enjoy it without any fear”. “Consumers’ consciousness towards natural products is increasing and there are rising concerns about artificial preservatives in food products,” says Rana. “We tapped into the opportunity to stake claim to the natural refresher space.”

Priced at Rs 105, the 700 ml glass bottle is easily identifiable on the grocer’s shelves with its neck rings and label showing a bouquet of carrots, mint leaves, white water lilies and other flowers and herbs. The sharbat’s 22 constituents include spinach, watermelon, endive, khas-khas grass, coriander seed and the distillate of Rosa damascena, or the damask rose, which comes from the rose farms of Kannauj in Uttar Pradesh.

The Hamdard headquarters in Delhi border the Walled City. A giant flex banner of a Rooh Afza bottle dominates its grey front. “We produce more than 800 products and have an annual turnover of Rs 300 crore,” says Majeed. “Almost half of it comes from Rooh Afza.” The other Hamdard brands might lack the syrup’s star power, but down the decades, a few have built their own consumer fan following – Shafi for clear skin, Cinkara for energy, Roghan Badam Shirin for hair, and Pachnol for acidity.

However, it is Rooh Afza that is as familiar in Lucknow as it is in Multan and Chittagong. Its geographical expansion mirrors the cataclysmic political transformations of the subcontinent. Following Partition, the founder’s elder son stayed in India, but his younger son moved across the new border and raised a new Hamdard in Karachi.

Exoticising itself as the ‘Summer drink of the East’, Rooh Afza in Pakistan tastes exactly the same as its Indian counterpart. After East Pakistan became the free Bangladesh in 1971, the property in Dhaka was transferred to Bengali owners, who carry on with the legacy that began in Old Delhi’s congested Lal Kuan.

Introducing it in 1907, Hakim Abdul Majeed, the Hamdard founder, included Rooh Afza in his first list of drugs a year later. A drink originally made to treat illnesses like heat stroke, dehydration and diarrhoea, Rooh Afza’s Persian name means ‘one that enhances the spirit and uplifts the soul’. Initially, the bottle labels came from the Bolton Press in Mumbai since Delhi had no facility to produce such colourful prints. At that time, there was also no concept of specially designed bottles for marketable syrups. A Hamdard prospectus on Rooh Afza’s history stakes its claim as the first sharbat sold in standard issue bottles. The earlier Rooh Afza bottles were heavier and taller with a long stem. They were fitted with a wooden cork, like a wine bottle. No such bottle survives in the headquarters, except in a photograph.

Earlier, when there was only a single factory in Old Delhi, Rooh Afza bottles were filled manually and the labels pasted by hand. Today, there are two bottling plants in Ghaziabad, UP, while the third and largest is in Manesar, Haryana, where the bottles are filled by a high-speed fully-automated rotary filling machine.

“One of our challenges is to prolong shelf-life usage beyond summer months and get lapsed users back to the fold,” says Rana. “So we are aggressively pushing it as an additive and taste-maker, which it always was.”

Many of us might remember our mothers adding a spoon or two of Rooh Afza to homemade ice creams, milkshakes, yoghurts, custards and kheers. The makers promote it not just as a sharbat but an additive, and Hamdard frequently publishes recipes inspired by the drink. The Relishing Recipes from Rooh Afza, a bottle-shaped booklet by Nita Mehta, have testimonials from women thanking the syrup for pleasing crotchety mothers-in-law and impressing kitty party guests.

“We are well-entrenched in the home with the kids, the elderly and the home-makers,” says Hadayat Islam, the brand manager at Hamdard. “Our challenge is to get the youth in college canteens and shopping malls. The older generation grew up in an India that had fewer consumer choices and so it was easier for Rooh Afza to establish a lasting relationship with them. But today, there are so many brands. If we don’t catch the youth, we might risk missing [out on] tomorrow’s market. We have to be as cool as Coke.”

While “it never crossed the mind” of the sharbat-makers even in their darkest moments to tweak the recipe, they are trying to adapt to modern times by experimenting with the packaging. In 2012, for the first time in its history, Rooh Afza is being sold in plastic bottles at select stores in Hyderabad and Bangalore. “It’s a pilot project and we will introduce those bottles nationwide only if they click with the consumers,” says Islam.

Hamdard is also toying with Rooh Afza dispensing machines, one of which can be seen at the headquarters. In March 2012, Rooh Afza’s new TV ad, in which a young family of four is bonding over carom and the sharbat, had a peppy number performed by playback singer Sunidhi Chauhan.

Veteran adman Piyush Pandey feels that Rooh Afza does not need to place itself in the image of multinational soft drink brands. “Rooh Afza is cool in its own way,” he says. “A traditional drink that has stayed relevant, it is one of those rare brands that has a hold over consumers not because of its marketing but because of its product.”

In the white-hot months of May and June, the sharbat’s maximum daily production reaches 225,000 bottles.

In this season, Rooh Afza vendors are seen, among other places, in Old Delhi, in front of the Sufi shrine of Sarmad Shaheed, the walls of which are as blood-red as the drink sold outside. Walking in the intense heat, thirsty pilgrims are taken aback by the sight of a block of melting ice kept over a large vessel filled with the sharbat. Sweaty hands tremble on touching the surface of the chilled glass, wet with condensation. The first few drops go in, barely registering their presence in the dry mouth. A few moments later, the heat recedes. It’s magic.

The drink of Delhi