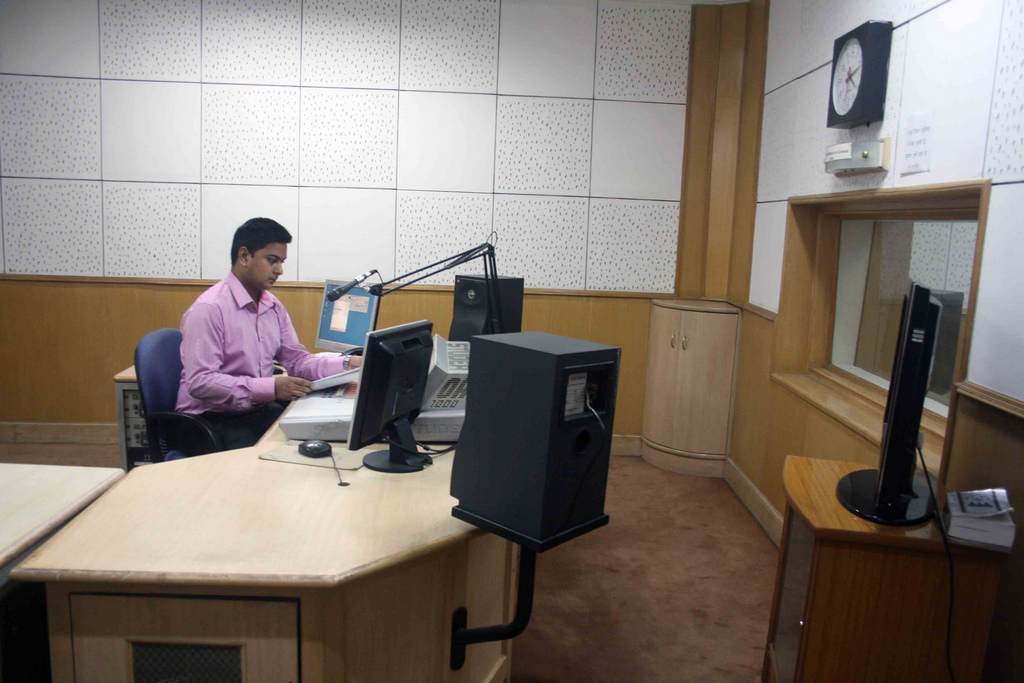 Iyam Akashvani. Samprati Vartaha Shruyantam. These are the first words you will hear every morning and evening if you tune in to Akashvani’s, or All India Radio’s (AIR’s), Sanskrit news. The announcement in Sanskrit goes, “This is Akashvani. You are now listening to the news.”

Who is the announcer talking to? If you were to round up all the Sanskrit speakers in Delhi, or even the country, they might not fill up even one-fourth of the Jawaharlal Nehru stadium. According to the 2001 census, the latest figures available, they number 14,135. More Indians speak regional languages like Dogri and Bodo than Sanskrit, one of the 22 official languages listed in the Constitution.

Yet the Delhi studio of AIR broadcasts a Sanskrit news bulletin twice daily.

“To my knowledge, this is India’s only such regular bulletin,” says Divyanand Jha, a Sanskrit newsreader on AIR.

Perhaps it’s not such a surprise—the motto of the public service broadcaster in Sanskrit is: “Bahujan hitaya, bahujan sukhaya (the welfare of many, the happiness of many)” And there is a message that the newsreaders do not read out loud: that AIR dares to go where others will not, that the service has more to do with the preservation of a rich linguistic heritage than with making money.

“It is fashionable to dismiss AIR as a government mouthpiece,” says Rajendra Chugh, the celebrated chief Hindi newsreader at Akashvani who retired in September. “But can the film music-dominated FM channels, owned by profit-obsessed corporate companies, dare to run a service in Sanskrit?”

“The Sanskrit news broadcast from AIR’s Delhi headquarters is an attempt to keep alive the spirit of ancient India,” says Mr Jha. “These 5-minute bulletins carry forward the heritage of the Vedas, Upanishads, Valmiki Ramayan, Kamasutra, and Vastu Shastra, all of which were in Sanskrit.”

G. Mohanty, director general (news), AIR, puts it fittingly to The Delhi Walla, saying, “Being a public broadcaster, we cater also to those who are not catered to by the market.”

The first Sanskrit bulletin on AIR was broadcast in 1974, at 9am on 30 June, almost four decades after the national radio service started in 1936. Why did AIR take so long?

Baldevananda Sagar, a veteran of Akashvani’s Sanskrit newsroom, who also retired in 2012, explains: “One of the characteristics of our country is that we take note of our rich talents and traditions only after they are recognized in the West. The same happened with Sanskrit.

“In the 1960s, when a group of Parliament members toured Germany, they discovered a radio station there regularly broadcast programmes in Sanskrit. They returned to Delhi and demanded something similar in the home-land of Sanskrit. The AIR bulletin began after seven years of lobbying in Parliament.”

In fact, Sanskrit was the last language to be taken up by AIR’s news service division. It followed Sindhi in 1967, and Nepali in 1971. Today, according to its website, AIR, which reaches 92% of the area and 99.19% of the population, broadcasts 647 bulletins daily, or more than 57 hours, in 90 languages and dialects. Of these, 178 bulletins are transmitted daily from Delhi in 33 languages. Sanskrit is broadcast from the new Akashvani building on Sansad Marg.

“Our Sanskrit news is called sanskritvartaha, not samachar,” says Mr Jha, “which is a Sanskrit word often used to describe Hindi news, but which actually means ‘good behaviour’.”

The Sanskrit broadcast follows the AIR news format for other “language bulletins”. There are usually two people in each shift; one translates the English news text sent in by an editor to all the language desks, and another reads the script on air. The total strength of the Sanskrit desk is 10; all the staff members are casual newsreaders-cum-translators, from young people in their 20s to scholars in their 60s.

Mr Sagar was the last regular reader of the Sanskrit news bulletin. His name is spoken in hushed tones among the “casuals”. A shastri (graduate) from the Varanasi Sanskrit University, he was one of the first three Sanskrit speakers recruited as permanent employees by AIR. Post-retirement, he was appointed director of the Kalidasa Akademi in Ujjain, Madhya Pradesh, but he is still invited to read Akashvani bulletins every time he is in Delhi to visit his family.

A Gujarati Brahmin, he says, “The perception of Sanskrit is that it belongs only to upper-caste Hindus, especially the Brahmins.” As it happens, every person I talked to for this story happened to be a Brahmin. Mr Sagar, however, says “The AIR bulletins are taking the language beyond such limitations.”

That might be one of the biggest accomplishments: pulling the language out of the rut of religious ritual and making people aware of its rich intonation and phonetics, of the sheer pleasure of speaking and hearing it.

Indeed, Divyanand Jha, who reads the Sanskrit news three- four days a week, claims to get “fan mail” from listeners of all backgrounds in India, and also from Australia, Germany and the US. “You will be surprised to know that a number of people are learning Sanskrit from our bulletins,” he says.

This could be because the AIR website has not only the latest broadcasts of its language bulletins, but also the scripts for those bulletins. “By listening to and reading the news, you can work on your pronunciation,” says Mr Jha.

A more serious student of the language can go well beyond Akashvani. The government-funded Rashtriya Sanskrit Sansthan, a deemed university in west Delhi’s Janakpuri, offers courses in Sanskrit. Samskrita Bharati, in central Delhi’s Jhandewalan, has volunteers promoting the language across India. Both offer correspondence courses. The number of scholars is small, but their dedication to the language is significant.

“Delhi university has about 400 Sanskrit students, out of which about half are reading it in post-graduation programmes,” says Prof. Mithilesh Kumar Chaturvedi, head of the department of Sanskrit, faculty of arts. “Many take the language at the BA level, if they cannot get admission into other streams, since here the supply (of seats) is more than the demand. However, the master’s students are more focused—most of them intend to make their career in teaching Sanskrit in schools and colleges. A few study it intently because it is a scoring subject in competitive tests, such as the entrance exams for civil services.”

The AIR bulletins do more than just provide psychological comfort to those who care about Sanskrit. Pankaj K Mishra, an associate professor of Sanskrit at St Stephen’s College, Delhi, who has been reading on the radio for more than a decade, says, “The daily news helps us to modernize and update this classical language.”

In 2010, AIR’s Sanskrit news desk began to maintain a register called Nutan Shabdawali. It is a work-in-progress dictionary of words that the team members invent while translating the new terms that crop up. It is much the same practice as the inclusion of new words in the Oxford English Dictionary—a sign of moving with the times. “We invented antarjalam for Internet and vityadhrit vartaha for paid news,” says Mr Jha. “One day, this dictionary might become museum material.”

The sanskritvartaha on AIR is one of many efforts under the radar of popular culture to make the language contemporary. In 1994, Doordarshan started Sanskrit bulletins on its national channel. India has at least three Sanskrit newspapers, both print and online. Sudharma has been published from Mysore for over 40 years, while Sanskrit Vartman Patram and Vishwasya Vrittantam were started in Gujarat over the last five years. “We also have 90 weeklies, fortnightlies and quarterlies,” says Mr Sagar, “offering political commentaries, literary criticism and stories and poetry in Sanskrit.”

In a way, the people behind Akashvani’s Sanskrit news are battling to make the language relevant today. And they are not the moth-eaten pandits one might associate with ancient languages. Mr Jha, for instance, is in his late 20s, a guitarist who composes songs in Sanskrit. His elder brother Parmanand, who also reads the news on AIR, is an award-winning poet, his Sanskrit verses touching on themes such as the Kashmir conflict and urban life. Both have day jobs as Sanskrit teachers; the money they earn from a 2-hour shift at the AIR is a paltry Rs.340.

“We don’t read the bulletin to pay our bills,” says Mr Divyanand. “We do it because this work at AIR has taken us to the forefront of how Sanskrit is being shaped and spread in today’s world.” Mr Parmanand adds, “This gives us immense satisfaction.”