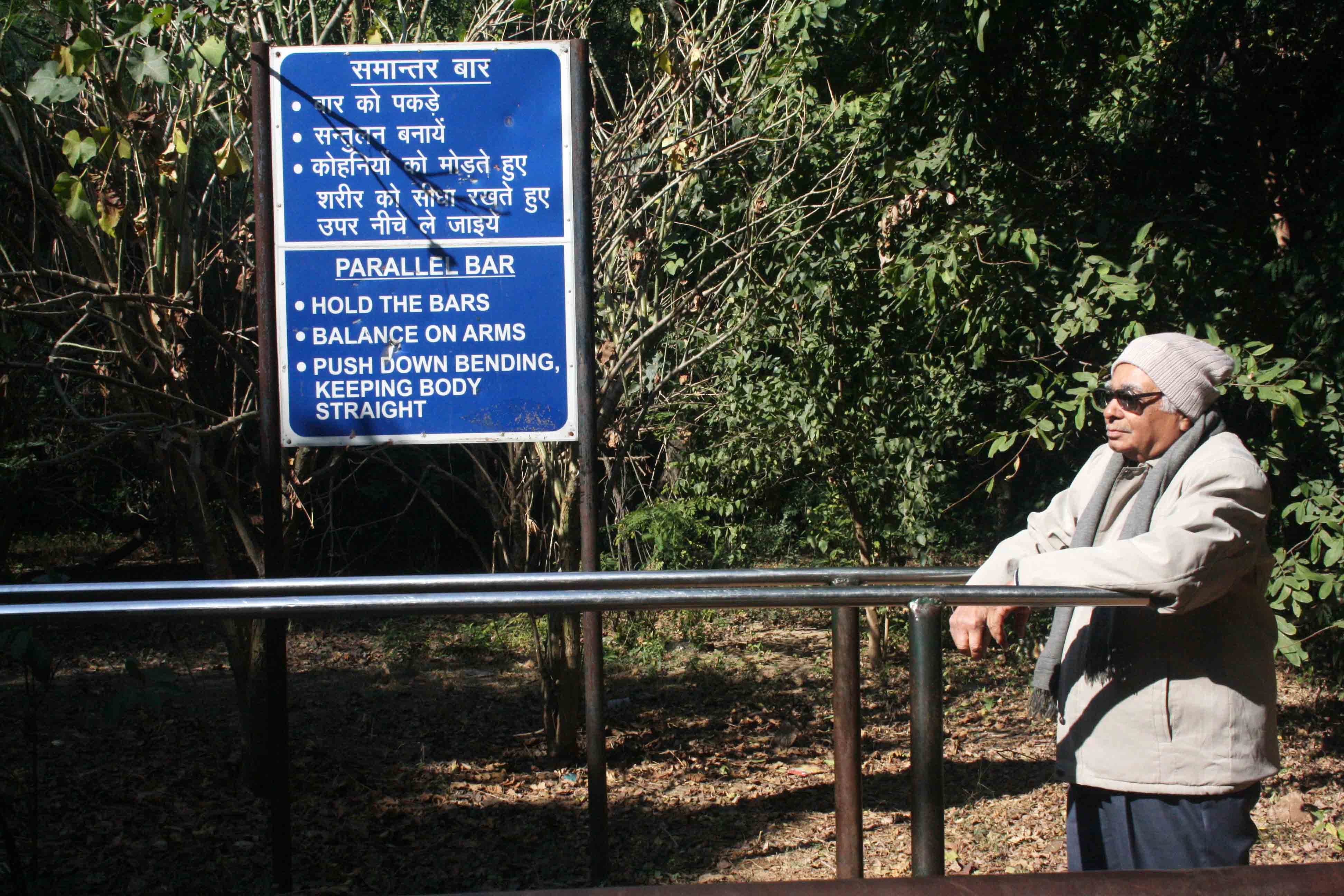 As seen on a board in south Delhi’s Deer Park:
• Stand erect
• Feet together
• Jump stride
• Bringing arms to shoulder level

Follow these instructions and, the Delhi Development Authority (DDA) promises, you will become a “Jumping Jack”.

The Delhi Walla feels more like an escaped kangaroo on the run. Thankfully, it is afternoon and there are few people around.

Tucked next to the entrance of chic Hauz Khas Village, the Deer Park — like most public gardens in the city — is managed by the DDA. Popular among morning walkers who live in nearby Green Park and Hauz Khas Enclave, the garden’s Fitness Trail is a city secret that has the potential to deliver the adventure of a lifetime.

The starting point is marked by a green metal board. Peer closely at the rusting surface and it is possible to decipher the names of 16 exercises explained by the how-to-do boards along the way. Sample some of them:
Lateral Exercise, Balancing Beam, Straddle Walk, Jumping Jack.

A few steps ahead, another board has this information:

Further along, another board displaying instructions in Hindi and English says:
Straddle Walk and Jump
• Walk stepping
• Either side of log
• Jump hurdlers jump of with both feet

Reader, will you dare to straddle?

“I will neither straddle nor try to be a Jumping Jack lest I get the wrong twists and turns in my body, leaving me employable for no other job but a Jack-in-the-Box,” says Ajay Jain, the author of Peep Peep Dont Sleep, a compilation of funny road signs on India’s highways. Mr Jain, who runs the Kunzum Travel Café in Hauz Khas Village, says: “What I might do is take my video camera and film those who follow these instructions and subsequently create a riot on YouTube.”

The fitness-conscious officialdom of DDA’s Byzantine bureaucracy will not find it funny. “The purpose of such boards is to help people in their exercise routines,” says Neemo Dhar, DDA spokesperson. “These instructions were phrased by sports people. You must contact D. Sarkar.” A commissioner-cum-secretary who is also in charge of sports, Mr Sarkar says: “These boards were installed many years ago in some of our parks. You must contact the horticulture department that looks after the parks.”

Bindesh Kumar, an assistant director (administration) in the horticulture department, says: “About three or four authorities, such as civil, electrical, sports, manage each park. The superintending engineer in Civil Circle-I (south-west zone) may help you.”

No, thank you. I’d rather “stand erect with feet apart holding horizontal bar, sit down by bending the knees and stand up, lock (sic) up towards horizontal bar in sitting position, jump with a pull and balance on bar”.

There is no bar around this board, but 18-year-old Rahul Chauhan, a student bunking school, makes an awkward sitting posture after trying to make sense of the instructions. “These must be for the thighs,” he suggests uncertainly.

A number of DDA parks across the city provide fitness tips to Delhiites. The instruction boards at the sprawling DDA park in Panchsheel, an upscale neighbourhood east of Hauz Khas, resemble those of Deer Park.

This bulleted how-to-do at the centre of its semi-wilderness could be passed off as a typical incomprehensible Emily Dickinson verse — “Lie down on bench, keep feet under strip, sit up, keep hand locked behind neck”.

Nearby, an elderly morning walker is resting his arms on two metal bars, not bothering to “push down bending, keeping body straight”, as advised on the board.

Circling edgily around Deer Park’s Balance Spinal Exercise board, Steven Baker, a British expat living in Hauz Khas Village, says: “The instructions for the spinal exercises bring back memories of being at yoga ashrams in Kerala and Uttarakhand. We Westerners often have blind faith in the words of the yoga gurus as we contort our bodies into twisted knots. I would be happy to ‘push the poll repeat with right foot alternatively’ in my attempts to find my inner nirvana.”

Like other DDA parks, most morning joggers in Deer Park find their nirvana in their mobile phones and iPods, instead of in birds, peacocks, rabbits and deer. No, those people lying horizontally on the ground are not sleeping, they are the yoga enthusiasts—and they always look grim. And nobody pays heed to DDA’s exercise tips; not even those who work out. They follow their own regimen.

The pot-bellied men half-heartedly touch their toes and perform crunches, while the RSS (Rashtriya Swayamsevak Sangh) elderlies, dressed in billowy khaki shorts, flap their arms up and down a few times. It is almost always the foreigners who are sighted earnestly performing push-ups and stretching exercises.

As I “stand erect, legs apart, circle arm forward and backward”, I ask Mr Baker if public spaces in the UK offer such free amenities.

“London caters to the many different communities that live within the city; from welcoming you to Southall train station in English and Punjabi, to the Bangla street signs of Brick Lane,” he says. “Alas, most of the signs in London’s parks are less holistic, focusing more on what you are not allowed to do than providing health tips. ‘Do not walk on the grass’, ‘Do not feed the ducks’, and so on.”

In that, the Deer Park can rival any public garden in the British capital. A “Rules and Regulations” board at the entrance asks visitors to “kindly avoid” “plucking of flowers branches” and “dogs without leesh”.

After trying to discover the logic behind the how-to-dos of the Uneven Walk (“Walk straight, keeping feet up and down on both bars”), the well-travelled road sign connoisseur, Mr Jain, says: “The sensible would use their own judgement. But it can harm those who take these at face value and end up with sports injuries. Tourists would probably just smile at these; such translations are seen all over the world where English is not the primary language.”

The foreign residents of our city, like Mr Baker, are tolerant of our linguistic idiosyncrasies. A digital coordinator and teacher at the British Council, he says, “The increasingly excellent levels of English from young, English-medium educated urban Delhiites will result in such comic signs being relegated to a thing of the past.”

Lenient towards Delhi’s own take on English grammar, as witnessed every morning in our city newspapers (and on the DDA boards), Mr Baker says: “I am sure that my attempts at signboard writing in Hindi would produce equally comic dialogues. With a large number of first language British people possessing the linguistic capabilities of Mr Bean, I am constantly impressed with the language skills of Delhi residents, with many residents having a working knowledge of two, three or more languages.”

Towards the centre of Deer Park is a board advising the fitness fanatic to take a break.

You May Relax Here:
Leave Your Body
Loose And Breath:
Be In A Easy Condition
And Tune With Nature

Is this fit for a city aspiring to world-class status?

“Someone could suggest to the chief minister to host Delhi’s own version of the Commonwealth Games in Deer Park,” says Mr Jain, “with medals going to those who follow these instructions to the letter.”

As I again “stand erect, feet together, jump stride, bringing arms to shoulder level”, Mr Baker, who is observing me, says: “I think a flash mob of Jumping Jackers is just what Hauz Khas Village needs. Who knows, the Jumping Jack might well be the next Gangnam Style.”