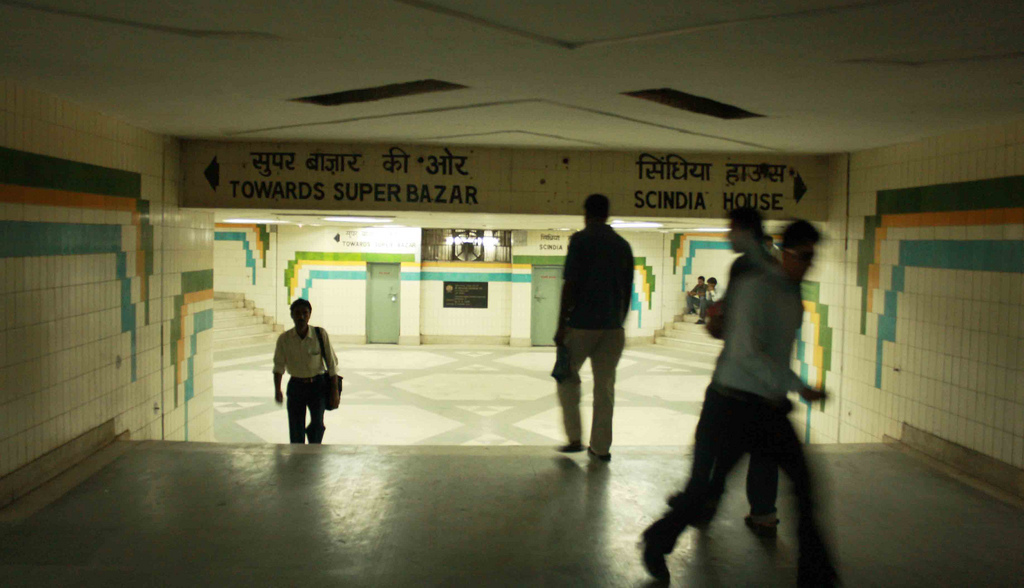 Omwati sweeps the place. Anil sells guavas and apples. Dinesh Kumar hawks mobile phone covers and chargers. Baneshwar Sahu keeps application forms for passport and PAN (permanent account number) card. Manoj Kumar has a collection of ties, with dozens of them in different shades of red. Raju sits behind his pile of gloves, socks and monkey caps. The rest of the people are a blur of legs, arms and conversations.

Connecting the two sides of Kasturba Gandhi Marg (KG Marg) is a pedestrian corridor, one of the six underground pedestrian passageways in central Delhi’s Colonial-era Connaught Place — it is also the liveliest.

The rest of the subways, all on the Outer Circle, mirror the painful and frustratingly long makeover this colonial-era commercial district has been undergoing since 2009.

From being the shopping destination of yesteryears, CP — as Connaught Place is called by Delhiwallas — is trying to become the showpiece of a world-class city. But the birth of the “new CP” is long overdue and the endless labour pains have become almost unbearable for people who work here and shoppers who are still drawn to its tarnished charm.

In anticipation of the XIX Commonwealth Games 2010 Delhi, the New Delhi Municipal Council (NDMC) decided to beautify the area. Apart from repainting the white columns and lighting the corridors of the Inner and Outer Circles with stylish lamps, the civic body took over the task of revamping the six subways and building eight more in time for the Games. Since then, many deadlines have died. Construction was started on four of the eight subways; they are still being built.

And the renovation of the existing ones remains a work-in-progress, the ground around them all dug up and barricaded.

As a collateral damage to this renovation attempt, most of the people who gave these Outer Circle subways their eclectic charm have disappeared. The palm reader of the KG Marg subway (near Scindia House) is no longer around. Neither is the seller of world maps in the Baba Kharak Singh Marg (BKS Marg) subway. The man who exchanged old stamps of foreign countries in the Super Bazar subway is missing too.

But underground life has not been completely snuffed out of the subways (and The Delhi Walla is not talking of beggars who seek alms in used McDonald’s disposable cups).

The Sansad Marg subway, which connects Palika Bazar to the Regal Cinema building, has lately become the base of operations for Rakesh Kumar, who sits on the subway steps — every day, from noon to seven in the evening — with a weighing scale and waits for people to come along and pay to be weighed. His fee: Rs 2.

“I started this business two weeks ago,” Mr Kumar says. “I used to make envelopes, but this is more lucrative. Here, I make about Rs 100 daily.”

The meagre earning supports Mr Kumar’s wife, his four children and a paralyzed father. “My wife is also crippled, just like me,” he says, carefully unfolding a piece of softened paper that “certifies” his handicap. With his sunken cheeks and grey stubble, Mr Kumar looks as if he must be in his 50s. He says he is 35.

In the days before it was renovated, the Sansad Marg subway was peopled with vendors selling scarves and shirts. One man sold portraits of sad-looking white babies who had large sparkling tears rolling down their chubby cheeks. Another sold posters of the Hindi alphabet, popular with foreign tourists. Today, this underground corridor remains quiet except for the footsteps of pedestrians.

But the silence is beginning to be breached.

Shiv Kumar Murliwala comes down each evening after six to serenade the passers-by with the tunes of old Hindi film songs on his flute. On a recent weekday evening, Mr Murliwala was playing the tune of Akele akele kahan ja rahe ho (from An Evening in Paris). “Sometimes, kind people give me Rs 5 or Rs 10,” he says. He also sells flutes for Rs 25 a piece.

On the exit towards Regal Cinema, a middle-aged man pauses, not because of the music, but to read the graffiti on the wall.

The subway that offers the most dramatic sight is situated at the Outer Circle’s N Block, just outside Amrit Book Co. The escalator, installed as part of the renovation of the KG Marg subway, descends against the backdrop of the imposing Statesman House. Watching people go down into the underground gives one the feeling that they will emerge from the top of the skyscraper across the road. A potbellied young man hurriedly stepping on to the escalator one afternoon was, however, too distracted to notice this visual illusion — he had more urgent things on his mind. “Tum mujhse dosti karogi (Will you be my friend?)” he kept asking the person — maybe a prospective lover — at the other end of his cellphone.

The pedestrian corridor under KG Marg has, however, remained untouched by renovation, apart from the setting up of new grills for the 2010 Games, and so retains its busy life. Here, fruit vendor Anil, whose father made this 2 sq. ft space his privileged turf twenty years ago, brings down the price of his apples and guavas as soon as the sun sets. Some of the office-goers, on their way to bus stops, metro stations and car parkings, stop by to bargain for these remains of the day. The subway closes at ten. Life returns again the next morning at six.

The ground beneath CP