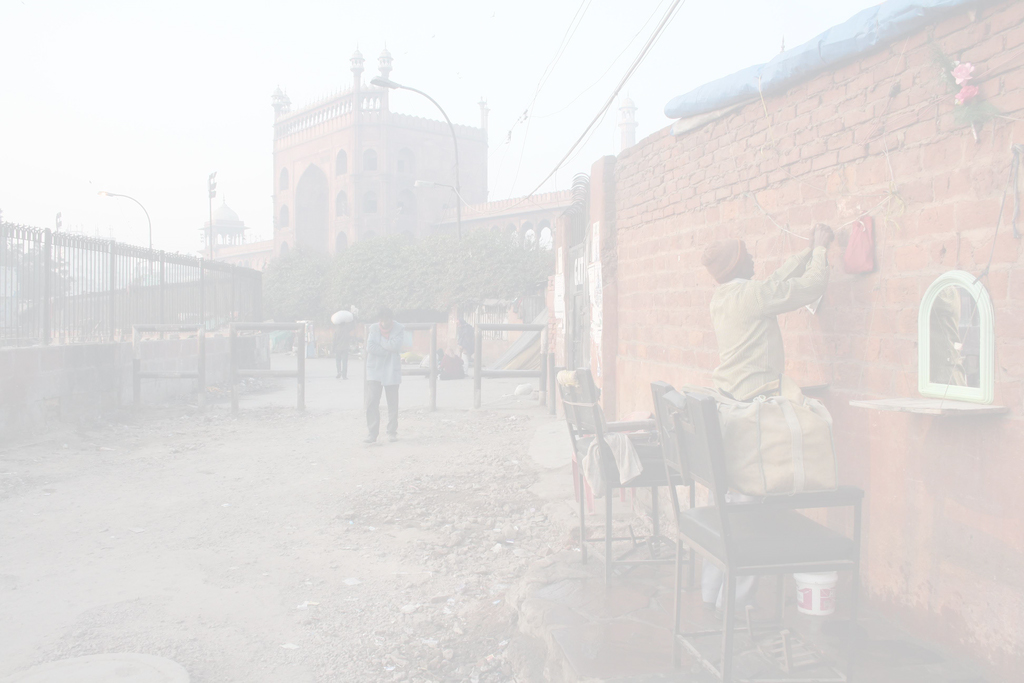 The incomplete stories of a Delhi walli.

[Text and (no photos) by Manika Dhama]

I once asked my mother what she would like to do in life if she could do anything in the world and she said, “I’d love to travel, without a care in the world, discovering something new behind the bend, perhaps like the Delhiwalla.” And then we sighed knowing well enough that for us the answer to that question lay within boundaries.

As I go about living, working, reading, shopping in Delhi, I’m constantly made aware of the limitations on my existence and being forced in by my own city and the place I call home. But like every other day over the last seventeen years, I wake up each day and step out to claim whatever I can.

One such bright Friday morning, I found myself on an open topped rickshaw traversing the busy lanes near Turkman Gate in Old Delhi.

A day before, at my glass-façade office in Gurgaon, a colleague asked if I needed someone to accompany me. I had to interview people (only men) in Old Delhi and he wanted to make sure I would be safe. My only companion was a man from another company who was working for us. This stranger was considered as much a threat by my colleague as the people I was to meet. His fears were dissipated to a degree on learning that I was taking my car (with the driver) from my home in Noida to Delite Cinema in Asaf Ali Marg, where I had to meet the man from the other company.

“Ask the driver to wait right outside the interview place,” suggested my colleague.

In this imagined threat, the driver was supposed to be my one safe bet against the worst that could happen.

I got rid of the driver in the parking lot close to the cinema theater and started the journey with my two companions, the man from the other company and our guide for the day, the latter being an Old Delhi man who was taking us to the meet the right people for our research.

As we stepped off our rickshaws and made our way through the lanes that were only wide enough for a walk, my companion looked a little perturbed. He worked in Mumbai, was from Nainital and admitted to never having seen anything like ‘this’ before.

“This is the heart of Delhi. Enjoy it while you can”, I comforted him while laughing at the irony of the Delhi girl saving the day for the Mumbai boy who was considered a threat to her.

Before long we were climbing up narrow staircases and had entered a dimly-lit room.

“This is Mr Feroz Khan”, said our guide.

Mr Khan (he smiled and insisted his name was ‘Feroz’) was a tall soft-spoken man with an honest smile. He was standing next to two snooker tables.

“He was the national champion in 20s and even played with Geet Sethi”, added our guide.

A few years ago I would have been surprised at finding snooker tables in a room at the end of a flight of narrow stairs accessed through narrow lanes. But the Delhiwalla had brought alive many a surprise that waits around the corner in Delhi. I wondered if the Delhiwalla had been here before me. I let myself believe that he hadn’t.

While Feroz (I reluctantly accepted to drop the formal address) graciously answered our pre-designed questionnaire, I began to weave a different story in my head. I imagined myself to be the Delhiwalli, chronicling the tales of the city, its monuments and its people. I imagined my saddle bag slung loosely on the shoulders as I made my way through the streets of this town in search of a story, any story. And my only companions on this imagined journey were a camera, a notebook and a copy of Virginia Woolf’s A Room of One’s Own.

It was soon time for the afternoon prayers so we began making our way out. Feroz urged us to visit his home, which was close by. This was not part of our study but it would have been foolish to refuse. It is not every day that a Delhiwalli visits a home in Old Delhi with a carved door that states ‘1907’ on a stone plate at the top. We had probably crossed a number of century-old doors on our way to this home, but we were going to enter this one.

A flight of stairs led us to the courtyard. The open sky was the first to greet us. Feroz’s little daughter stood aside wondering what business these early afternoon intruders had. We were shown to the dressy drawing room with richly embroidered upholstery where a painting of Feroz’s grandfather looked out into the world of his time. Below it on a table were school notebooks, with the name of a Catholic Convent School emblazoned on top.

From the courtyard, another set of stairs led to a view of minarets of the Kalan Masjid. Rising higher than the minaret was the telephone tower atop the main terrace that served as a reminder of us being in the 21st century. I had half a mind to tell Feroz about the possible health hazards of these towers, but I checked myself. I was a guest and had no business to preach.

After an exchange of appreciation for his time and hospitality, we thanked Feroz and made our way out in search of two rickshaws, one for the lady (i.e. me) and the other for our guide and my Mumbai companion.

During our conversation Feroz had spoken about a legend that if the world was ever flooded, the waters would only reach the first step of Jama Masjid and no further. He said he was blessed to be so close to the mosque on the hill that would be safe from such a calamity.

On our way back, I had brought out my office diary and scanned all the signboards for the exact name of the hill. I could have asked Feroz to clarify but a chronicler must not interrupt stories. I had to find this missing piece on my own. And I did. The Delhiwalli had met a former Snooker champion and visited his century-old home in Pahari Bhojla.

I wanted to tell the Delhiwalla about my meeting with Feroz, hoping he wouldn’t respond with a “Yes, I’ve met him”. Even if he had perhaps I could still write my story, which I had stumbled upon without searching for it. But I knew my story was incomplete without pictures. What did Feroz (and his daughter hiding behind him) look like? Was there a resemblance between Feroz and his grandfather? Could we really see Jama Masjid atop the terrace of his home or would our view be blocked by telephone towers? What emotions would be betrayed by the faces of the people staring at me as I smiled all through my rickshaw ride?

To bring Feroz to life I will have to go back. And perhaps this time I will also find Razia Sultan, who lies buried (if Archaeological Survey of India is to be believed) in Pahari Bhojla.

But to complete one story and find another I cannot be armed only with a camera, a notebook and Virginia Woolf. Those were worthy companions miles away in New York City, where I could venture out alone to watch Shakespeare in the Park or buy Albert Camus and Nietzsche at a late-night book sale or even take a train out to Montauk and walk to the Lighthouse, all by myself.

In the city I call home, even the search for the first female monarch of the Delhi Sultanate can only be made in the perceived safety of the morning light.

And only with a group of male companions who will follow the Delhiwalli’s rickshaw to make sure she is within safe distance.

[The author runs the blog framed by wanderlust]