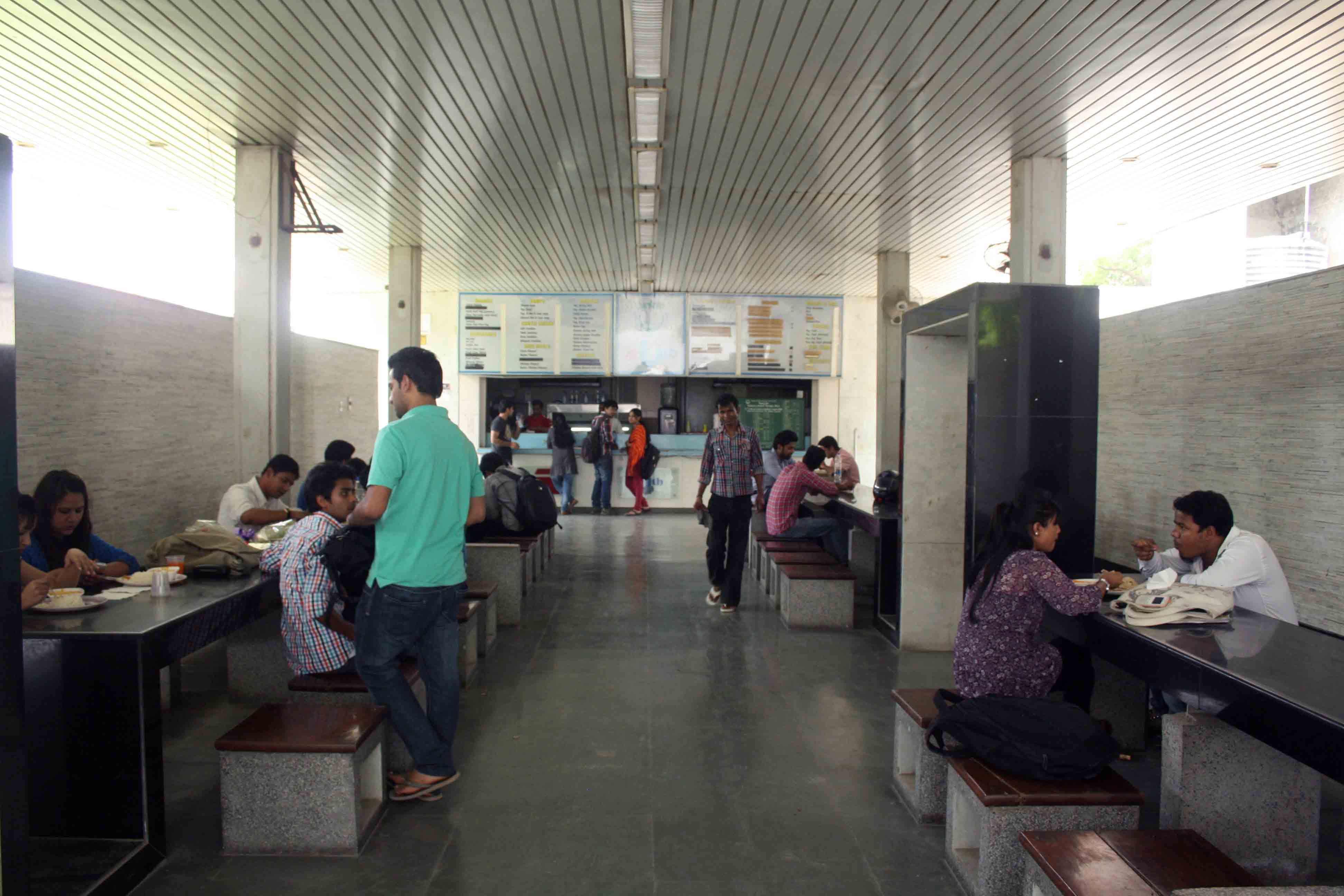 The floor is of Kota stone. The benches have wooden sheesham tops. There are no doors. Designed by the Delhi-based Romi Khosla Design Studio, this is Castro Café in Jamia Millia Islamia. It looks out on a garden and stays open till 7pm. The staff wear gloves. The house cat is called Adrian.

A students’ canteen, Castro Café first came to notice in 2008 when it featured on the cover of The Modern Architecture of New Delhi, a photo-heavy volume featuring landmarks like the India Habitat Centre, Lotus Temple and the American embassy building. The book called the “semi-open air café” a “blur of the inside and the outside through a space that is never fully enclosed”.

This same description can be applied to the café’s “semi-open” intellectual character—part liberal and part conservative. A popular meeting hub in Jamia, an institution whose emblem includes the words “Allah ho Akbar”, Castro Café is a place where author Salman Rushdie might come for a plate of rajma chawal without disguising himself as Joseph Anton and still leave unhurt, though not before facing tough questions.

“Rushdie hurt the sentiments of Muslims,” says Fariha Jamal, a first-year law student sitting amid five classmates. They are the café regulars. “But Rushdie is a brilliant author,” says Vaibhav Pratap, the only Hindu in this circle. Turning to him, Ms Jamal says with a grin, “Vaibhav, I won’t hate you for reading The Satanic Verses as long as you won’t discuss its plot with me.” Her chin on the table, S. Bushra Kazim butts in, saying, “My cousin has read the novel and feels strongly against it but he never thought of running out into the streets with a sword.”

At a time when the Muslim community risks being painted with a single brush because of the frequent actions of some extremists, it is important to document a place like Castro Café. It illustrates a face of the community that might express disagreement with several issues but without showing intolerance.

“Castro Café is a manifestation of the intellectual evolution of Jamia,” says Jamia’s vice-chancellor Najeeb Jung. “We are not a madrasa but a sophisticated modern university that takes pride in having a Muslim flavour and a modern outlook.”

It would be naive, however, to assume that the attitudes of Castro Café regulars reflect that of Jamia’s majority. In 1992, Prof. Mushirul Hasan, the then pro-vice-chancellor of Jamia, was quoted by Sunday magazine as saying that Mr Rushdie had offended Muslims but banning books was wrong. “I was beaten, hospitalized and prevented from entering the campus for more than four years. I was traumatized,” says Prof. Hasan, who was appointed Jamia’s vice-chancellor in 2004. It was during his tenure that Castro Café came into existence.

In a campus of arched doors and gateways, the canteen, with its sharp lines, stands out. “By creating a modern eating facility with a sleek look,” says Prof. Hasan, “we wanted to project a progressive image of Jamia.”

But why name the café after Fidel Castro who might seem to have lost relevance today?

“People say the same thing about Gandhi,” says Prof. Hasan. “So should we erase Gandhi’s memory? Castro is one of the foremost anti-imperialist leaders in the world and Jamia was, similarly, founded as an anti-colonial movement.”

Jamia Millia Islamia was originally established in Aligarh in 1920. It moved to Karol Bagh in Delhi five years later, relocating to its present address in 1936 in Okhla, then a village on the banks of the Yamuna. By an Act of Parliament, it was made a Central university in 1988. In 2011, the National Commission for Minority Educational Institutions declared Jamia a minority university, a status that allows it to reserve 50% seats for Muslims. According to Mr Jung, 54% of the students are Muslim.

A walk on campus helps an outsider understand the leftist world view Jamia once aspired to and perhaps still does. The university’s many centres, halls, gardens, gates and lanes are named after personalities as diverse as novelist Qurratulain Hyder, playwright Habib Tanvir and activist Mridula Sarabhai. There is Noam Chomsky Complex, the big Edward Said Hall, the smaller Yasser Arafat Hall, and the even smaller KM Ashraf Hall, named after the Marxist historian — there are no landmarks named after great Israeli statesmen such as Yitzhak Rabin, an omission that indicates that the so-called liberal institutions in our country are not truly liberal.

In addition, Saadat Hasan Manto Lane is popular as a jogging track and the Virendra Sehwag Viewer’s Gallery is in the cricket grounds. The Hall of Girls’ Residence is named after Halide Edib, a feminist Turkish novelist who stayed at Jamia in 1935. There is Bagh-e-Nanak and Dabistan-i-Ghalib.

“These names mirror Jamia’s cosmopolitan character,” says Prof. Hasan. “The art gallery next to Castro Café, for instance, is named after (painter) M.F. Husain, who had nothing to do with Jamia, but we wanted to convey our recognition for modern art.”

The institution’s eagerness to be seen as progressive is most evident in the architecture of Castro Café. Comparing it to the bold simplicity and detailing of Mies Van der Rohe’s famed Barcelona Pavilion, author Rahul Khanna writes in The Modern Architecture of New Delhi: “Architect Martand Khosla has been able to give the impression of a building that floats despite its industrial looking, pared down features. Perforated aluminium sheets in the ceiling were used to reduce the noise levels, and all artificial light has been concealed in keeping with the canteen’s minimalistic look.”

Explaining the café’s swift rise as the university’s most popular hub, Shohini Ghosh, Sajjad Zaheer professor at the AJK Mass Communication Research Centre, says: “It has an interesting architecture, good food and a non-judgmental atmosphere. Here, a diversity of students and teachers can mingle. Colleagues from different departments can meet, share a meal or a cup of coffee. It is cosmopolitan, gender-friendly and safe. This was a luxury women students of the 1980s did not enjoy. Today, I go there when I have company or when I want to be alone.”

Castro Café opened in 2008, the year of the Batla House encounter. Two suspected terrorists and a police inspector were killed in an encounter in the Batla House locality, near the Jamia campus. A number of local residents were also arrested, leading to allegations, speculation and protests by political parties and human rights groups, including students and teachers of Jamia Millia Islamia.

“There is a witch-hunt against Muslims in India,” says Faizan Ashraf Dar, a history honours student, who is cradling a mewing Adrian on his lap. A native of Srinagar, Kashmir, Mr Dar says, “It’s the same story in my homeland. Most Indians have no idea what is happening there. Have you ever seen a cousin or a friend being killed by the army in front of you?”

Mr Dar’s friend Sumit Gharti, an English honours student, immediately says: “How can you say that? Kashmir is like the mangalsutra of India.” Mr Dar replies, saying, “No, Kashmir was never a part of India.” As the argument continues in gentle tones, Adrian jumps from the table and runs towards the counter.

Semi-liberal and a little more ← The Reuters Interview – On Nobody Can Love You More
City Culture – De Bhasar, Nehru Place →