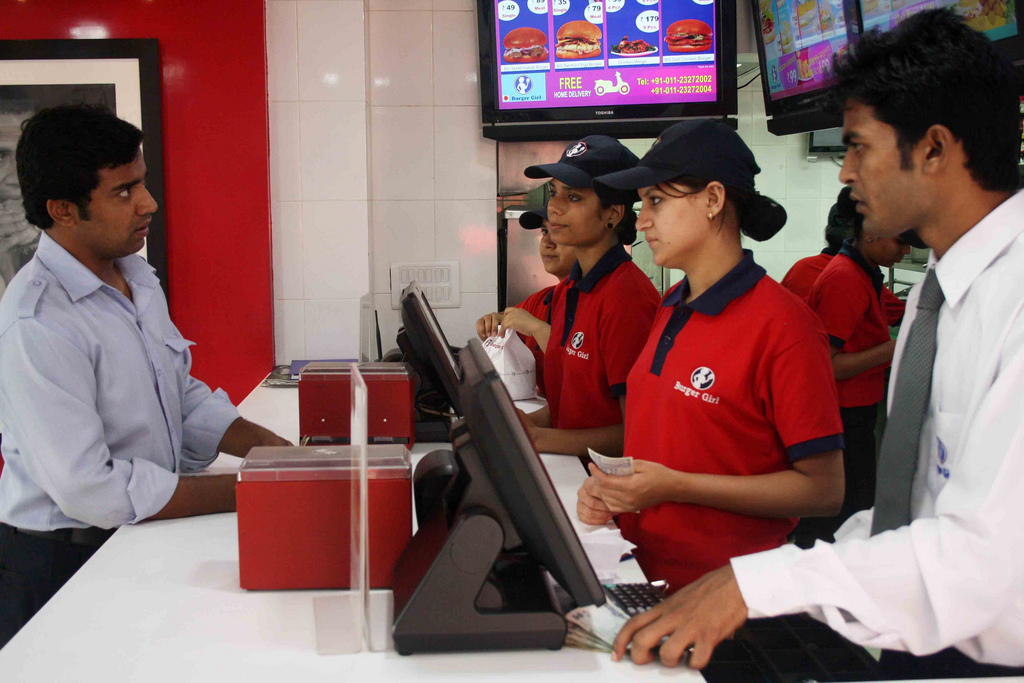 A burger for biryani.

US President Barack Obama graces one wall and actor Arnold Schwarzenegger another. Behind the counter are girls in short skirts. Seated at a table are two young women, in veils. They are eating French fries.

In 2013, the conservative Old Delhi got an American-style fast-food outlet.

This is Burger Girl. Opened in April, it’s the first Delhi outlet of a US-based fast-food chain that has outlets in Haryana, Punjab and Himachal Pradesh.

But why the Walled City? In this land of kormas and kachoris, you can’t spit out your paan without hitting a kebab stand. Who cares for cheeseburger?

Old Delhi ceased being a fast-food virgin when a McDonald’s opened in Chandni Chowk in 2005. But that touristy bazaar is not the same as this stretch of Netaji Subhash Marg in Daryaganj, home to Muslim-dominated neighbourhoods behind its row of landmarks like Golcha cinema, Moti Mahal restaurant and the Sablok sex clinic.

This area is changing.

Look out through the glass door of Burger Girl. There is a brand-new Domino’s Pizza across the road. Close by, is a new McDonald’s.

All these outlets will be within walking distance of each other. And this locality, already famed for being the site of the weekly Sunday Book Bazaar, will become Old Delhi’s fast-food hub.

But why invade Old Delhi on such a scale now? The honchos at KFC and McDonald’s talked, respectively, of “expanding our footprint in Delhi” and “increasing our accessibility to the customers” — the delicate fact of gatecrashing into a food heritage zone has perhaps gone unnoticed.

From Dilli Gate to Lohe Wala Pul, the traffic-heavy stretch already enjoys a prominent position on the city’s culinary map—thanks to Moti Mahal, the restaurant where butter chicken originated. Other local eateries are less well-known but have loyal customers. Taj Snacks is patronized for its dosa sambhar and Mehta’s for chhole bhature. The dimly-lit Royal Afghanistan Restaurant is the most romantic; it serves evocatively named dishes such as Bhindi Bamiya, Kabuli Palao and Afghani Lassi, and its walls are decked with posters of Kabul of the 1970s.

Once, there used to be a chaat shop called Mithas too. It’s given way to Burger Girl.

But don’t press the panic button. No other old eatery has closed. The woman at Saini Sweets—adjacent to the burger joint—continues to serve lassi in old-fashioned earthen cups. “I’m not worried about my business,” she says of her stall, started by her father-in-law in 1948. “Those who like burger will go for burger and there will always be people who will have lassi and rabri.” Another landmark of the area has remained intact. Golcha cinema still has its balcony stall—though it shares its walls now with Café Coffee Day (CCD), the first modern outlet in these parts, opened in 2011.

Recorded history leaves no evidence that Sir Syed Ahmed Khan, the legendary figure who lived in Old Delhi and who founded the Aligarh Muslim University, ever tasted a burger or a pizza. In May, a burger-pizza outlet opened in a crowded lane named after him, close to the Golcha.

With its distinctive red-and-white striped colour pattern, the outlet, close to Khadija Hospital, looks no different from other KFC outlets elsewhere in the city. But it is not KFC and it has nothing to do with Kentucky. This is IFC; the initials stand for Indiana Fried Chicken. However, the outlet—part of a Bangalore-based chain with branches in Belgaum and Tumkur in Karnataka and Karad in Maharashtra—has nothing to do with the American state of Indiana either. Instead, a prominently-placed banner says: “We serve 100% halal food.”

Situated adjacent to what was once the haveli of Sir Syed Ahmen Khan, IFC’s logo includes the side-profile of a happy-looking chicken. The menu says:
“Its time to change the game.
Your patience deserves to be rewarded
First time in walled city
Pizza at the price of Cholay Bhature
Momos & Chowmein”

Burger Girl has a staff that includes women, all from distant parts of the city. Dressed in black baseball cap, red T-shirt and black short skirt, server Manju Thapa, who commutes from Dhaula Kuan, says, “We are getting lots of women and couples from there.” She means the immediate neighbourhoods of Old Delhi. “Many of them get nervous while placing orders in English and almost everyone enquires whether the chicken is halal or not. Most ladies are in burqas.”

Those who believe that these American burger-and-pizza chains are a part of the postcolonial, neo-imperialistic conspiracy to destroy native traditions need not worry. These outlets are confined to the peripheries of the Walled City—perhaps because this is the only part of Old Delhi that has the space. Domino’s doesn’t home-deliver pizzas to the congested alleys of Matia Mahal and Kucha Chelan.

One morning at the Fitness Mania gym in Gali Kaptan Wali, near Golcha, a couple of muscled boys are breakfasting on nihari, a daily ritual after their workout. “Sometimes we have paya from Gharib Hotel near Jama Masjid, or korma from Al Jawahar, or halwa puri from Shyam Sweets,” says Sarthak Kaushik, a Nai Sadak resident. Asked if he would consider shifting to the morning menu of McDonald’s or KFC once they start operations in Daryaganj, he says, “When you can have a Rs 50 nihari with your five friends, why go for a Rs 100 burger that is fit only for one?” The nihari eater hasn’t seriously scanned the Burger Girl’s menu—Tandoori Egg burger is for Rs 35. The cheapest burger at McDonald’s comes for Rs 25.

The same afternoon, two burqa-clad women climb up to the first floor at Burger Girl and take seats by the large glass windows that overlook Netaji Subhash Marg. “It’s my first time here,” says Reshma Nabi, a resident of Kala Mahal. “My sister-in-law told me about this place.” Soon she is joined by her daughter Sabha, a college student dressed in a salwar- kameez outfit. Looking out at the McDonald’s outlet, she says: “Isn’t that nice? I’m bored of kebabs.”

Perhaps you have been a part of those ubiquitous food walks in Old Delhi in which earnest-looking heritage lovers, armed with cameras and hand sanitizers, try to partake of Mughal history by greasing their fingers in oil-rich gravies. Will such a tour be worth its trans fat if you find the Golden Arches overshadowing Kallu Mian’s biryani stall?

“Who are we to lecture Old Delhiwallas on preserving the food traditions?” says Shashank Aggarwal, a Patel Nagar resident who runs the website Food Enthusiasts of Delhi and regularly leads people to explore the food scene in Shahjahanabad. “We eat the jalebis and burras and go back home. But those living in Purani Dilli might want more eating options,” he says.

It’s 10.30pm. Burger Girl is staffed entirely by men. The girls leave by 6pm. But there are women customers who have come with their families. A veiled woman is sitting alone with an infant at one table.

Half an hour later, the outlet will close for the day. So will CCD and Domino’s. The food street will go quiet, save for an omelette cart near Moti Mahal. But good old Karim’s, near Jama Masjid, takes the last order as late as 1 am. It’s just a 15-minute walk. We can always have biryani.