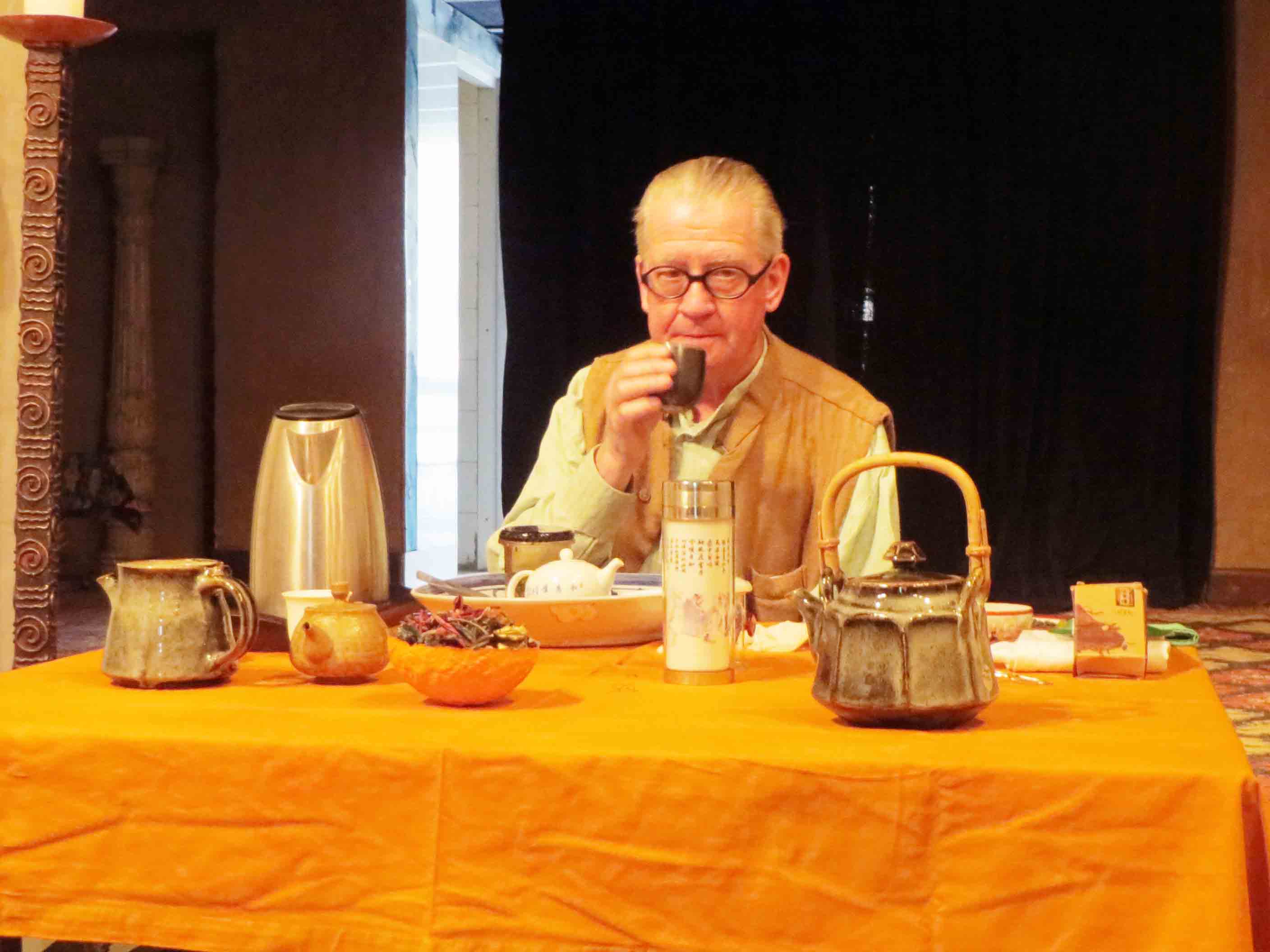 Meditations on the chai.

[Text and photos by Manika Dhama]

For most Delhiwallas it is impossible to imagine a day that does not begin with tea.

However, for a non-tea drinker like me, the allure of this milk, water and sugar concoction had always been unfathomable, until a recent lecture in the city confirmed my views.

The chai millions of Indians swear by is made from the most inferior tea leaves from any plantation and it found its way to us only because the British, after purchasing plantations in East India, distributed it for free across towns and villages in the early 1900s to create a craving that would eventually draw scores of Indians to pay for this sorry drink.

While Delhi awoke to a nippy winter morning one Saturday, I made my way up the concealed staircase leading to ‘The Attic’ in the Regal Building in Connaught Place. The venue was hosting a two hour lecture on the ‘Chinese Tea Ceremony’ by Bryan Mulvihill.

Mr Mulvihill is a calligrapher and tea connoisseur whose love for tea began during his childhood in Vancouver, Canada, where a large Asian population and the presence of tea houses fuelled his curiosity about the history and culture surrounding this plant. He went on to collaborate with Daniel Dion and Su Schnee to set up the World Tea Party in 1993, an organisation that aims to promote all things tea across the globe through lectures, exhibitions and collaboration with artists. He now travels around the world, savouring different forms of tea and exchanging ideas on the subject in varied locations, from the tea houses introduced to him by artists in Germany to a Sacred Music Festival, chaired by the Dalai Lama in Los Angeles.

The tea plant (Camellia Sinensis) was a green plant first cultivated in China as herbal medicine, mostly within temples. Then monks began to use tea and the ceremony of its preparation to extend the idea of a meditative act that fostered respect for nature, humility and a sense of peace and calm.

Outside of its medicinal and religious connotations, the tea culture in China developed around 1,200 years ago and it became an important part of social life with the sprouting of tea houses and the increasing significance of a tea ceremony at weddings and family gatherings.

Selecting the right tea is an art that requires distinct knowledge of fragrance, shape and taste. Leaves with a beautiful story and name have added charm. Once selected, these leaves participate in the ceremony of tea-making, with pure water being poured in the right utensils. Boiling water, used by most of us for any kind of tea, is a foe for the delicate leaves of this plant. The correct method, as Mr Mulvihill explained to his audience seated on cushions encircling low tables, is to boil the water only to purify it if necessary but to pour it over the leaves only when it has cooled. The best tea leaves will open up as they come in contact with water, emanating a distinct fragrance.

As the lecture progressed, the audience watched Mr Mulvihill prepare different samples of tea in the various contraptions used by the Chinese. The small group present in the room then shared these teas from the hills of China and India in small ceramic cups, trying to focus their attention on the uniqueness of each tea.

Conversations began around the cultivation of tea in India and a gentleman who hailed from Tamil Nadu recalled his grandmother’s practice of growing a tea shrub in her garden for family consumption, quite like the early Chinese cultivators for whom growing and consuming tea was a family ritual.

From the secrets of private gardens the talk veered towards omnipresent tea bags. Mr Mulvihill shook his head while scoffing at the inferior quality of leaves sold by large corporations engaged in mass production. Better quality tea is found at higher altitudes and Darjeeling’s finest can range from Rs 5,000 to Rs 7,000 per kilogram. In contrast the tea from Siliguri, which is significantly inferior, can be as low as Rs 500 per kilogram. It came as no surprise to the audience that the high quality tea produced in India is only for export.

For the room full of Delhi dwellers, an important question was where in the city they could find the best and authentic green tea.

“Mr. Mittal in Sunder Nagar”, replied Mr Mulvihill, who has tasted enough leaf and water mixtures in Delhi and around the world.

The humble tea leaf, unlike its fashionable counterpart coffee, stirs the pineal gland in the brain, often termed mystically as “the third eye” or as Descartes preferred it, as the “principal seat of the soul”. In an alternative world dreamed up by tea lovers like Mr Mulvihill, tea houses would have stood for unbridled freedom of expression around the world.

Delhi intellectuals would then have lamented the loss of an Indian Tea House, preferably in Connaught Place, after it had been bulldozed during the Emergency in the 1970s.

“India has no tea culture”, Mr Mulvihill remarked during the lecture. But he hopes that someday India will create tea houses within the social and cultural sphere as centres of thought exchange and delightful tea ceremonies.

In the years to come the World Tea Party plans to invite members from around the world to join the movement and Mr Mulvihill is looking forward to welcoming an Indian tea aficionado to a seat at the table.

[The author, who blogs on Eggfacemomhead, is a friend of The Delhi Walla]