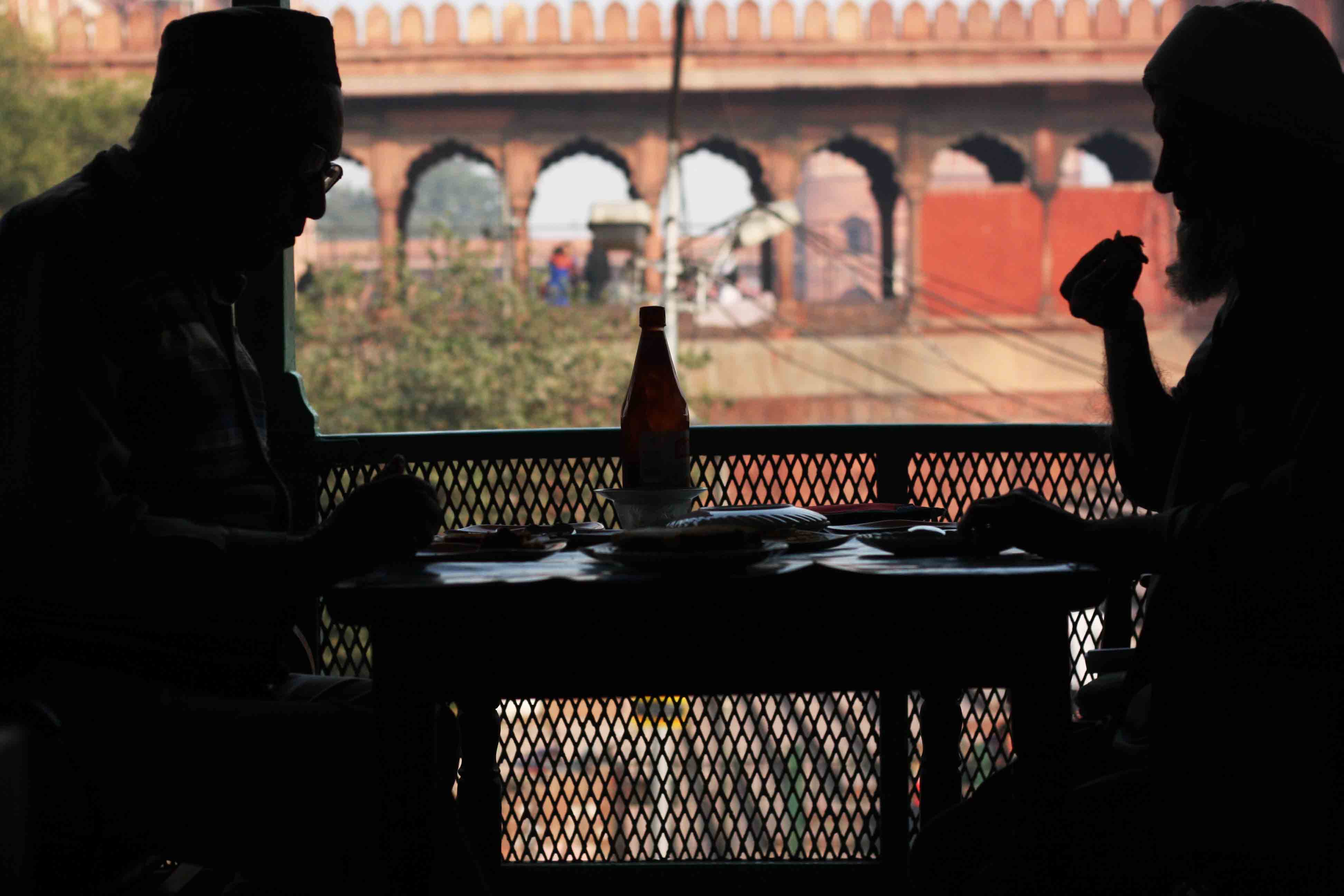 Old Delhi’s Haji Hotel lies in the congested Motor Parts Market. There are shops selling used car tyres. It is almost impossible to simultaneously inhale oxygen and fight the throng to reach the hotel. But the view!

Jama Masjid looks breathtaking from the sprawling balcony. On a clear day, you can see the Red Fort in the distance. Film director Mira Nair shot The Reluctant Fundamentalist at this hotel for three days. Years ago, singer Begum Akhtar was seated in this very balcony. So were Rasoolan Bai and many other music maestros. They too must have been rendered speechless by the grand Mughal-era mosque — it seems a jump away.

Haji Hotel is one of about 30 guest houses in the vicinity of Jama Masjid. “A hundred years ago, there were no guest houses in Purani Dilli,” says Haji Faiyazuddin, the hotel’s 75-year-old owner who lives in the adjacent Chawri Bazaar. “Delhi was not a centre for business. Most businessmen from outside the city would come in the morning, finish the transactions and leave the same day. If some stayed over, they slept in dharamshalas and musafir-khanas, which were free. About 80 years ago, a few hotels came up in Chandni Chowk, but here,” Faiyazuddin waves his arm towards the mosque, “there were only ours and Jamia (Hotel) for a long time.”

The clean-shaven Mr Faiyazuddin talks so politely and in such elegant Urdu that he appears to be as much a relic of the city’s fabled past as the neighbourhood’s signature landmark. The hotel was named after his father, Haji Hafiz Zahruddin, who established it in 1952. It has 10 rooms and two dormitories. The most expensive room — at Rs 500 a day — has an attached toilet. Most guests, as in the area’s other hotels, happen to be Muslim. Many of them work in the Gulf and pass through Delhi either to catch flights out, or board trains to their villages in Uttar Pradesh (UP) and Bihar. Other regulars include traders from towns in western UP such as Saharanpur and Muzaffarnagar.

The hotel’s balcony looks like a painstakingly designed lifestyle store in Khan Market. It has a cast-iron bench upholstered in faded brown leather, an old Favre-Leuba wall clock, half-a-dozen ceiling fans, a blackened tea kettle that is always on the boil, and a tin roof that produces a pattering sound when it rains.

On the roof, the mosque’s imposing gateway and a blue underwear hanging on the clothesline harmoniously blend the aesthetics of 17th century architecture with scenes of everyday life.

“After new hotels came up some decades ago, our business plummeted by 30%,” says a totally relaxed Mr Faiyazuddin.

Indeed, the roof of the area’s biggest hotel looks on to Haji Hotel. Bombay Orient is the only hotel around Jama Masjid to have an elevator. Managed by two sisters, it has three floors and 80 rooms. Couples are admitted only on the evidence of a nikahnama (marriage certificate). Each room has a prayer mat and a sign pointing to the direction of Mecca.

In this historic neighbourhood, every lodge is alive with its own distinct character. Al-Hayat’s lobby displays six wall clocks showing the current time in London, Paris, New York, Dhaka, Karachi and Jeddah. Gharib Nawaz Hotel has a pink-and-white artwork of Ajmer’s Sufi shrine. The staircase of the Delhi Guest House has disco lights. Din Dunia has a printing press on its verandah that publishes literary works in Urdu. The Pakeeza Guest House is tucked amid hole-in-the-wall printing presses that churn out wedding invites. Al-Jawahar has an atmospheric corridor filled with sounds of the bustling Matia Mahal bazaar. Shaka tries to stand out at night with its neon signs. Krishna lies adjacent to the defunct Jagat Cinema. Taj has the rear view of Jama Masjid — all the three domes are clearly visible from inside the rooms. Jamia has yellowed pillars, a derelict terrace, and a lungi-wearing receptionist.

Not one hotel has a restaurant, though the room service might get you the Walled City’s customary dishes (nihari, biryani, etc.) from eateries outside. The cramped Kashmiri Restaurant, next to Bombay Orient, suddenly becomes popular at this time of the year. It serves gushtaba, yakhni and rogan josh. “As winter begins,” says Mr Faiyazuddin, “a large number of Kashmiri families leave the valley for warmer places such as Delhi, where they pass the cold months in hotels and rented flats.”

By November, the pavement tea stalls in Matia Mahal start serving the pink noon chai and the crisp lavassa roti, the traditional Kashmiri breakfast. Rose-cheeked children sit at these stalls with their parents and grandparents. “Right now, 15% of our guests are Kashmiris,” says a caretaker at Bombay Orient. “The figure will treble after mid-December.”

Mr Faiyazuddin’s elderly poet brother Ameer Dehlavi, who helps him manage the hotel, fell for one of their Kashmiri guests. “I first saw Ayesha Khatoon 40 years ago,” Mr Dehlvai told me two winters ago when I discovered the hotel. “Her husband Ghulam Muhammed, who was a government accountant in Srinagar, had booked a room with us. He had asthma. His condition was frail. They were looking for a doctor. Once I was entering the hotel and she was leaning on the balcony… she saw me, I saw her… I seldom talked to her except making a few inquiries about her husband’s health. After his death, I married her.”

The poet’s wife lies buried in a Srinagar graveyard, but a drawer in this Old Delhi hotel has a collection of poems dedicated to her memory.

Every year Mr Dehlavi recites his verses in the Republic Day mushaira, the prestigious poetry assembly held annually at the Red Fort. Mr Faiyazuddin himself commands respect in Old Delhi society. He is a member in the committees of a few charitable institutions, including the Bachhon Ka Ghar orphanage in Daryaganj. His father, the hotel’s founder, who was once a member of the Mughal Football Club in Lal Kuan, was an eminent citizen. There are photos of him escorting visiting dignitaries, Yugoslavia’s Marshal Tito and Egypt’s Gamal Abdel Nasser, in Jama Masjid. Mr Faiyazuddin’s great-grandfather Munshi Turab Ali was Jama Masjid’s first mutawalli (custodian) after the British restored the mosque to Muslims following its takeover in 1857.

“While assisting walid saheb (father) in the hotel,” he says, “I came across artists who visited Delhi to record for All India Radio. They would chat with walid saheb about the times when they were patronized by rajas and nawabs. (Sarod player) Ustad Hafiz Ali Khan preferred room No.2, where he would shut himself for riyaz (practice). One evening, he called in my father and his friends and dazzled them by producing the sound of marching soldiers on his sarod. Begum Akhtar, who would come from Faizabad, liked room No.1. Her nose gleamed with a giant diamond. She called our servants respectfully by their names and sat by this very desk talking to father about namaz and rozas. She would watch Jama Masjid for hours.”

Today, our celebrity artists stay in New Delhi’s fine hotels. Haji Hotel’s less artistic guests rarely sit on the balcony, although camera-toting tourists sometimes step in while searching for a perfect angle to frame the mosque. Faiyazuddin offers them tea and biscuits.

After Diwali, the chance of seeing Jama Masjid in the evening is dim. By 7pm, as the air gets chilly, the staff seals the balcony in grey canvas curtains. The view must wait for sunrise.