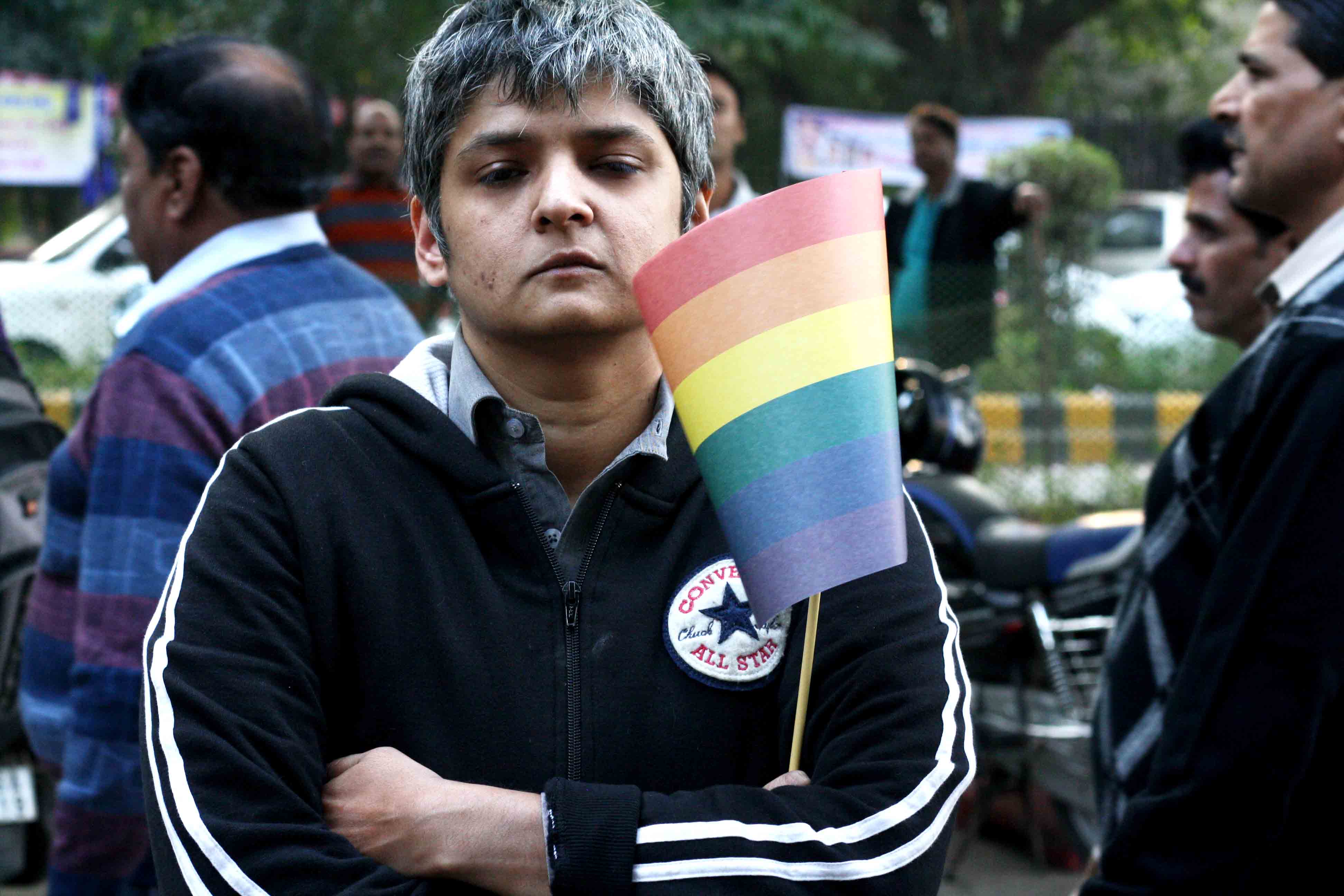 The long walk to freedom.

In December 2013, India’s Supreme Court turned down that progressive and just verdict, reinstating a colonial-era ban on gay sex – the same evening an impressive number of Delhiwallas who believe that fundamental rights are for every person, irrespective of her or his sexual orientation, gathered in Jantar Mantar, the capital’s protest square, to express their outrage against the judgment.

Many people were dressed in black; some were waving little rainbow flags; others carried placards with slogans like ‘We are not criminals’ and and ‘Nelson Mandela was on our side’. There were disappointed faces in the crowd, but not a single person looked defeated and helpless; everyone seemed ready for a fight.

The allotted venue was marked by a giant rainbow flag — it was draped around the largest branch of a neem tree. A short distance away was the more crowded congregation of the Aam Admi political party, which was celebrating a recent election victory.

Explaining why he was chanting ‘Humko chaiye azadi (we want freedom)’, Dipankar Dey, a law intern, said, “I’m here because I’m gay and this ruling affects me. Now if I make love to my boyfriend, I can be arrested by the police.” Invoking an iconic gay American politician, the young intern said, “It’s time to move beyond activism. We need action. We need a Harvey Milk.” Mr Dey’s boyfriend could not accompany him because of his sister’s wedding the same evening.

Standing alone wearing a black bandana, Jasmine, who works in an NGO and chose to give only her first name, said, “I’m one of the allies of the LGBT (lesbian, gay, bisexual and transgender) community and today I’m disappointed and disgusted. But we have come so far, so close to the real freedom, that now we cannot afford to go back.”

Nobody at Jantar Mantar seemed prepared to go back into the closet — though some had their faces covered with scarves to avoid being photographed.

Looking utterly broken, journalist Leslie Esteves, one of the pioneers of Delhi’s gay movement, shook her head, saying, ‘This is terrible.”

A few sari-clad Aadmi Party supporters too were waving the rainbow flags. The Delhi Walla stopped one of these women and asked if she supported the struggle against section 377 of the Indian Penal Code, which penalizes gay sex. The woman, refusing to give her name, shrugged her shoulders, saying, “I don’t know what this flag stands for. It’s definitely not of India’s.”

Jostling amid a pressing crowd of TV journalists, Raja Bagga, a law researcher said, “Although legal sanction to gay sex is symbolic, it means that you are on the law’s right side, and this is a safeguard against potential harassment. In today’s judgment, the court hasn’t outright rejected our rights but it has asked us to go to the Parliament. Technically the judges might not be faulted, but they did have the power to address minority rights on their own.”

Holding a copy of Merle Miller’s On Being Different: What It Means to Be a Homosexual, a St Stephen’s college student, speaking on condition of anonymity, said, “Gay sex will become fun again, now that it is outlawed.”

Watching the protestors from a road divider, Dev Sanyal, an Aam Admi supporter who was wearing the party’s characteristic white Gandhi cap, said, “What these people are demanding is against nature, against religion. We cannot support them.”

Just an episode in a long struggle