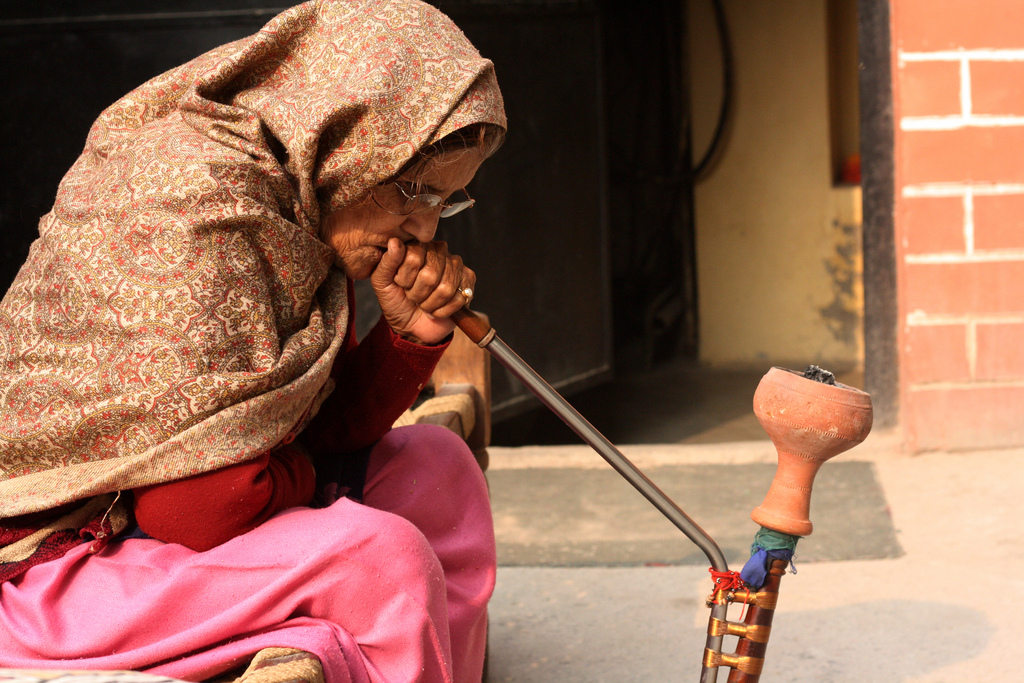 Shahpur Jat Village can never have the strut of the nearby Hauz Khas Village. If optimists believe otherwise, then the closure of Bookwise in November 2013 should clear that up. One of the earliest shopping landmarks in this predominantly rural south Delhi neighbourhood, the coffee table bookstore regularly hosted literary events, including meetings of the serious-sounding E. M. Forster Literary Society. With unsold books lying packed in giant cardboard boxes, the owner told The Delhi Walla that he downed shutters because of “no business”.

Even if you concede that brick-and-mortar bookshops are fast becoming an obsolete concept, a walk around Shahpur Jat’s rutty lanes will show you that this place, unlike the more famous village, just doesn’t have the sort of style described in fashion magazines as “achingly hip”. No trendy crowds seen here — too many lardy aunties and their marriageable daughters hopping from one wedding boutique to another; and hardly anyone at all visible on weekdays. One afternoon, I found a brand new restaurant totally empty and a woman was throwing buckets of water into an open gutter outside.

In 2011 I wrote here on Shahpur Jat, and talked about its various aspects, including its history. Coming back after a long time, I feel it has a little more spice — and I’m not talking about the delicious litti-chokha of The Pot Belly (I wrote about it here). Let me take you to five places for you to savour a new Shahpur Jat experience.

It’s the name of a popular American book series on two girls. Here, it is a first-floor restaurant, very dressed up and yet easy-going. The lamps hanging from the ceiling are actually birdcages – thankfully, with no suffering birds in them. The restaurant was opened in December 2013 by a chef and his fiancée, who ran an eatery in Melbourne for eight years. The menu claims to specialise in Australian food; the selection is a mix of Mediterranean, European and East Asian cuisines. The all-day breakfast includes green eggs with ham, in which ‘green’ means spinach. Co-owner Ravish Bhavnani told me that the beer-battered fish’n’chips is gaining fans. I did not try the dish, but can confidently recommend the restaurant’s Honesty Library. It’s a wall-to-wall shelf containing paperbacks of truly cheap novels, which you will be too shy to purchase in a bookstore but only too glad to flip through over your pancakes. Chef Bhavnani said that these books came from his personal collection and so could not be bought (as if!). I sat down with a sleazy-looking cover titled Naked Came I.

It’s a huge junkyard of dresses, lampshades, linen, shoes, glasses, and an in-house tailor. Almost everything here is black: floor, ceiling, shelves, tables and chairs. Even the little piano is painted black. The afternoon I was there, one of the two French partners who own the place was busily clattering around in black heels. Very slim, very erect, very formal, her skirt, too, was black. There’s a cosy-looking coffee shop in the middle of the store. Le Café’s menu is jotted down on a small black slate. I ordered a madeleine. The teacake was disappointingly dry, but I liked the delicate china plate on which it was served. It had light pink flowers on the border. The cappuccino was less than great (too milky), but the café itself, surrounded by dresses and mannequins, was so casual and charming that the quality of the snack didn’t matter. La Parisiennes might go unnoticed in its spiritual home, but in Delhi it’s the poor man’s perfect touch of Paris.

The Wishing Chair store and its café The Mad Teapot

Opened in 2012, it has become wildly popular among the Shahpur Jat faithful. Let’s start with the lovely loo, which has a chessboard floor and dozens of black-and-white portraits of famous French women of the Belle Époque; one seemed to be of the legendary stage actress Sarah Bernhardt. The store has a wide range of quirky stuff, from washable synthetic flowers to a turtle-shaped cushion. And, don’t get me talking on lamps. If you are filthy rich, ask the owners if you can buy the sweet little café tucked deep inside the store. Every chair at The Mad Teapot has a different design. The wooden shelf on the counter holds colourful ceramic teacups, imports from China and Thailand. Teapots are also painted on the walls. The menu is largely non-fattening, and I’m kind of spellbound by the Enchanted Forest Salad. The rocket leaves, the juicy French beans and orange wedges felt as beautiful to the senses as the store’s long-stemmed lamps.

Shahpur Jat has an ensemble cast of young creative people who quit their day jobs to become entrepreneurs in blouses and brooches. In her thirties, Pooja Roy Yadav resigned as a brand consultant in a Defence Colony firm, flew to London for a crash course in jewellery designing and then arrived in the village to open a prettily cramped store stocked with works by 11 designers. While a few necklaces and pendants are excessively zingy, many others – such as a plug earring of turquoise with black onyx — were delicate and striking. If I were a thief, I would have stolen the gold-toned YSL Opium bottle priced at 8,750 rupees. The brooches made of magazine covers by a designer called Rashi Verma, formerly a stylist with Cosmopolitan, looked such a clever idea. The dreamiest thing in the store, however, was what Ms Yadav called a “watch accessory”. Essentially a large flattish shell pearl on a black string, it could easily pass off as a fashionable man’s amulet or charm. To me, it looked like a watch without the hands. Skirting the price tag of 2,000 rupees, this, too, I plan to steal.

Just like Hauz Khas Village, Shahpur Jat, too, has a 14th century ruin, but the one here follows the traditions of minimalism. Said to be built by Alauddin Khilji, the austere-looking Tohfe Walla Gumbad captivates a lover of old mosques slowly but intensely. Pigeons perch on the dome while village boys play gulli danda on the vast ground, empty but for a shehtoot tree. A jagged-edged wall of rubble surrounds three sides. Though much of the larger building is lost to us, the prayer hall stands intact. During the winter season, an elderly hookah-smoking village woman named Mukti sits daily on a string charpoy next to the mosque’s entrance from noon to 4 pm, and freely shares her take on life. If Shahpur Jat promoters want their patch to meet all the standards of the rival village, they must surely talk of this monument.

A few snapshots of the village