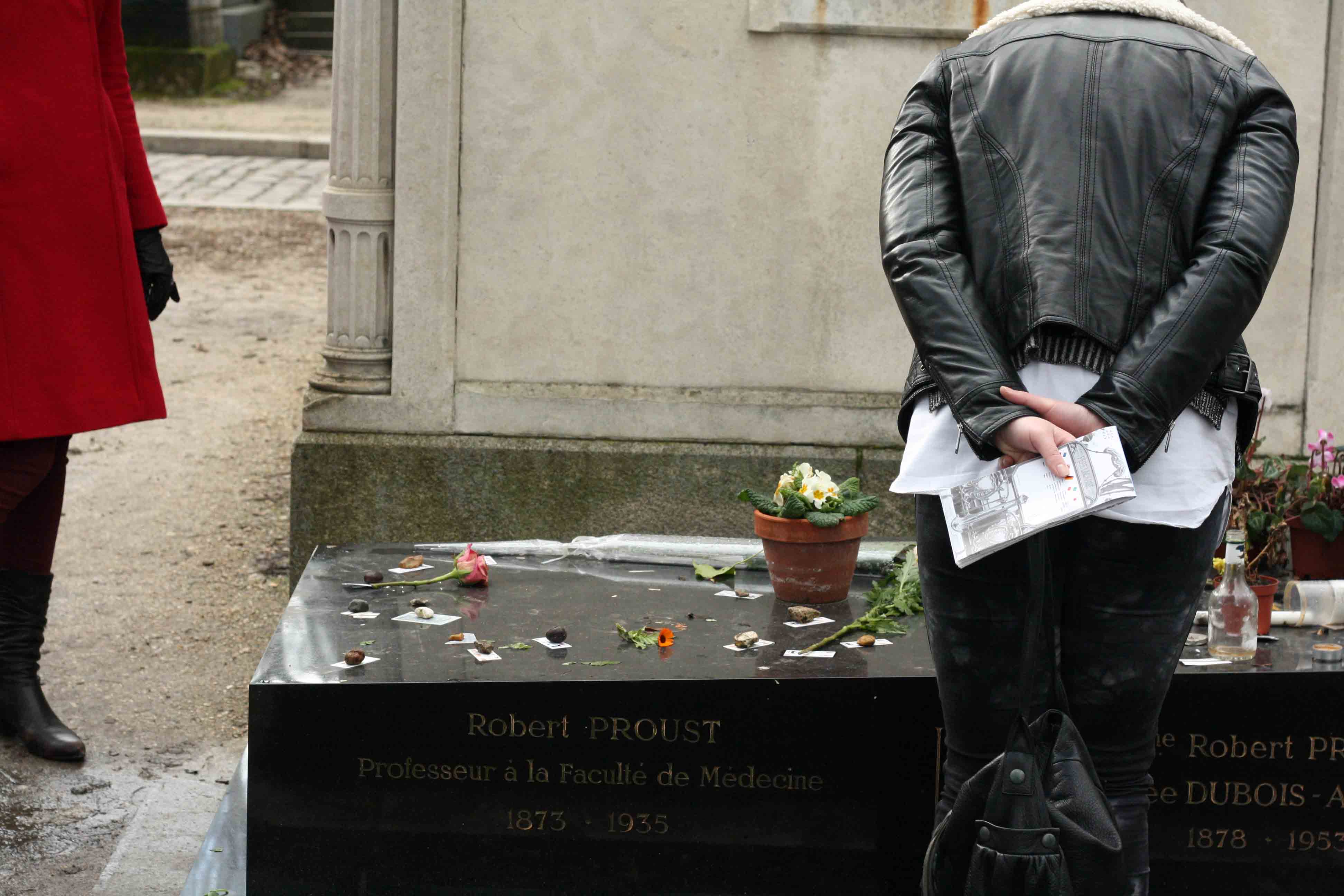 The Delhi Walla in Paris.

One cold January afternoon The Delhi Walla visited Marcel Proust in Père Lachaise, the cemetery in Paris that is home to some of the most distinguished citizens of France. I had first come here in 2012. That time I was in the middle of In Search of Lost Time, Proust’s seven-volume novel. It is now 2014 and I’m re-reading the novel.

The sky was covered with rain-filled clouds. The chestnuts trees were bare. The ground was wet and many graves were covered with green moss. I stood by my beloved novelist’s tomb, which is also the final resting place of his father, mother and brother. Some pilgrims had left stones on the grave, a Jewish tradition of respecting the dead. A few others had left behind offerings of flowers as well as tickets of the Paris Metro.

Just then a group of tourists stopped by. The tour guide took out a portrait of Proust from his thick file and waved it in front of his clients, saying, “This is Marcel Proust. Most of us have never read him. I certainly haven’t. This is his grave.”

Then they all left, towards the direction of Colette.

On being alone again, I placed my weather-beaten copy of Swann’s Way, the first volume of Lost Time, on Proust’s tomb, and took out a poem that I always carry in my bag — At Père Lachaise, by Mona Van Duyn.

I read it aloud to Marcel:

What began as death’s avenue
becomes, as we go on,
death’s village, then metropolis,
and the four of us,
reading our rain-blistered Michelin
map of graves, keep looking back,
but cafes, tabacs,
boulangeries are gone.

It is a long way yet
to where we are going to please me,
and the bunch of muguets
I am holding too tightly is frayed
already. On either side
of the cobbles we slip on,
darkly arched over by dripping chestnuts,
the ten-foot high deathhouses
stand, and we can
see at hilltop intersections
only further suburbs of
the imposing dead.

For a while we are lost
in this silent city —
the map is not detailed
and the avenues curve.

It is cold here. I am very cold.
My friend begins to cry.
We find a Kleenex for her
and a tranquilizer.

Head bent, hand clenched
to her mouth, her black bob
spattered with chestnut petals,
she stumbles and turns her ankle.

I am to blame.

A whole afternoon in Paris spent
on this spooky pilgrimage,
and we are too far in to go back.

The rain has stopped.

“Look, my God, look!”
Anything awful can happen here,
but I look where she points.
Ahead, at a break in the trees
where a weak ray of sun shines through,
two of the great dun tombs
are dappled with color, with cats,
more cats than I can believe,
two dozen at least,
sitting or lying on doorsills,
window ledges, pedestals, roofs,
and a yellow one, high in the air,
curled round at rest on the bar
of a towering cross.

My heart is thumping.
“Are we dreaming?
Oh, aren’t they beautiful!”
my friend whispers.

We smile at the cats for a long time
before we go on past.

We are almost there.

Off to the side,
behind the grand monuments,
we find a flat slab marked MARCEL PROUST
and, feeling a little foolish,
I lay my fistsized white bouquet
on his black marble.

We go back another way
where the street widens,
opening out to gardens,
and we run down broad steps,
laughing at nothing.

A few people appear,
arranging gladioli in urns,
and far down the hill we can see
an exit to the boulevard.

We find Colette’s grave
on the way out and call to her, “You should have seen the cats! “

Just before leaving, I kneeled down on the ground and kissed Proust’s tomb, promising him that I would come again.

A day with Proust

23. (This photo is by Jonas Moses-Lustiger)