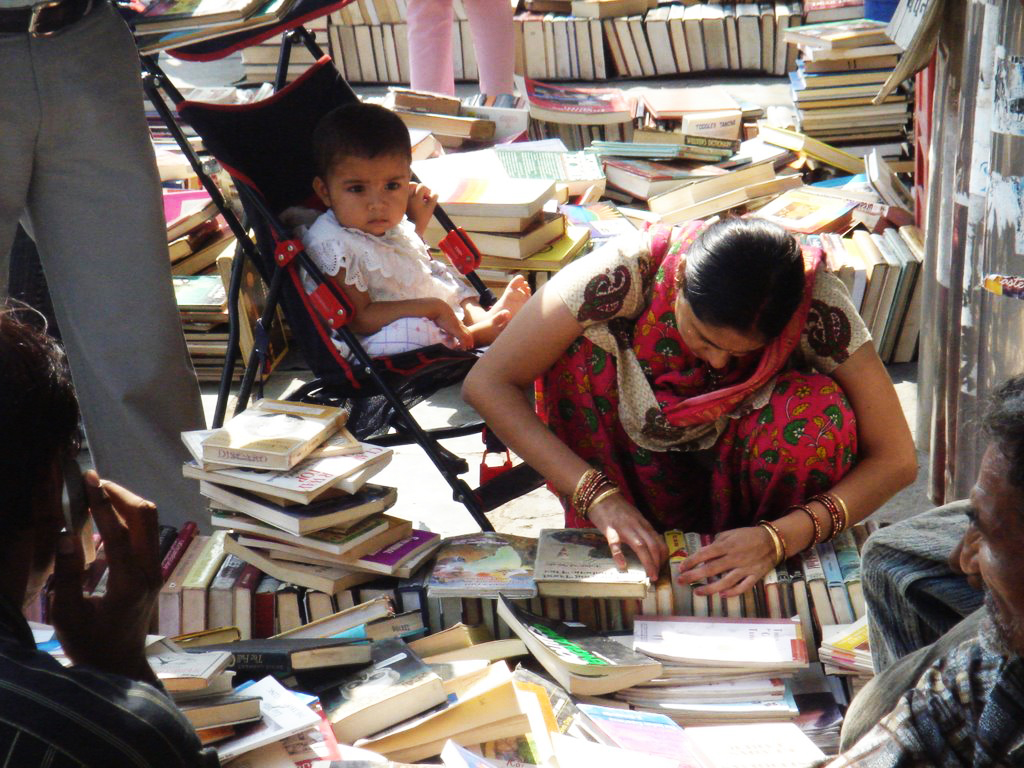 There are two kinds of muggles in Delhi. Those who have been to the weekly used-book bazar at Daryaganj and those who haven’t.

The first group doesn’t want the others to know that each Sunday, the mile-long footpath between Delite cinema and the Daryaganj footbridge (now extinct) disappears under the ‘maal‘. The ‘maal‘ being the seller-speak for novels, memoirs, whodunits, quiz books, classics, encyclopaedias, coffee-table books, pulp fiction, foreign magazines and, sometimes, rare first editions.

The Delhi Walla is spilling the secrets. After reading this, you won’t have to walk through the entire stretch. Here is the guide to the best spots.

Surinder Dhawan’s 12-year-old stall, close to Delite cinema, is one of the best.

In his heap of around 3,000, Mr Dhawan has everything – from Harry Potter to Jane Austen to Annie Proulx to Jackie Collins to New England cookbooks to even the memoirs of Michael Bergin, the Calvin Klein poster boy.

“Ships come to Mumbai and Gujarat with large book containers from the US and Canada, dealers buy there in bulk and we get the maal from the dealers,” says Mr Dhawan. While he has 20,000 books tucked in a godown in Nihal Vihar, Mr Dhawan brings just a fraction of that collection each week to Dayaganj. That’s enough to pull in booklovers from as far as the neighbouring states of Uttar Pradesh, Punjab, Chandigarh and Rajasthan.

The low pricing adds to the appeal. For instance, in a regular bookshop, you’ll get Toni Morrison’s Beloved for Rs 400, while Mr Dhawan gives you its first edition (hardbound!) for Rs 100.

Where Next to Hotel Broadway, Asaf Ali Marg Best time Around noon

Mr Javed lives in Jamia Nagar and when people living in Kalkaji, Sarita Vihar and Okhla want to dump their grandpa’s books, they call him. That’s why his collection is so eclectic. Gore Vidal’s gay short stories. Prince Charles as a young bachelor. Shobha De’s Starry Nights. Or a handy hardbound of Jane Eyre.

Books you can use

Literature is boring to many, but even they must read – if not Boris Pasternak, then Bill Gates. Mukesh Tiwari’s stall is a great find for those who need ‘course books’ for cheap. Here is a one-stop destination for books on computer programming, surgical science, and lest we forget, electrical engineering. ‘Crowd-pulling’ titles are Electromagnetic Field and Waves, Signals and Systems and A Textbook of Engineering Metrology. IAS, GMAT, MBA aspirants, too, will be breathless with excitement here.

Where Next to Mr Javed’s stall (see above)

The Nandas have a 40-year-old empire of 30,000 books and three stalls. Ankur, the founder’s son, manages the one near Golcha theatre, next to the “chhoti waali wine shop”. His ‘maal‘ is ‘general’ — meaning everything except college books.

A few steps ahead, and you’ll meet the founder, daddy Kuldeep, lording over a grander stall, complete with shelves. This is a treasure-trove of hardbounds. Unfortunately, the Nandas are not open to bargaining. However, their third stall, next to Ankur’s, runs a sale in two categories – Rs 20 and Rs 100. Dig there and you may get something to make the day worth it.

Where Near Golcha cinema

You may have your favourite sellers, but Daryaganj’s Sunday book bazar has much more to offer if your legs don’t give way easily.

In 2008, I found the first edition of Ernest Hemingway’s The Old Man and the Sea (cover jacket intact) buried under a pile of John Grisham paperbacks. For Rs 100! In Paris’s Shakespeare & Co bookshop, the same copy sells for more than a thousand euros.