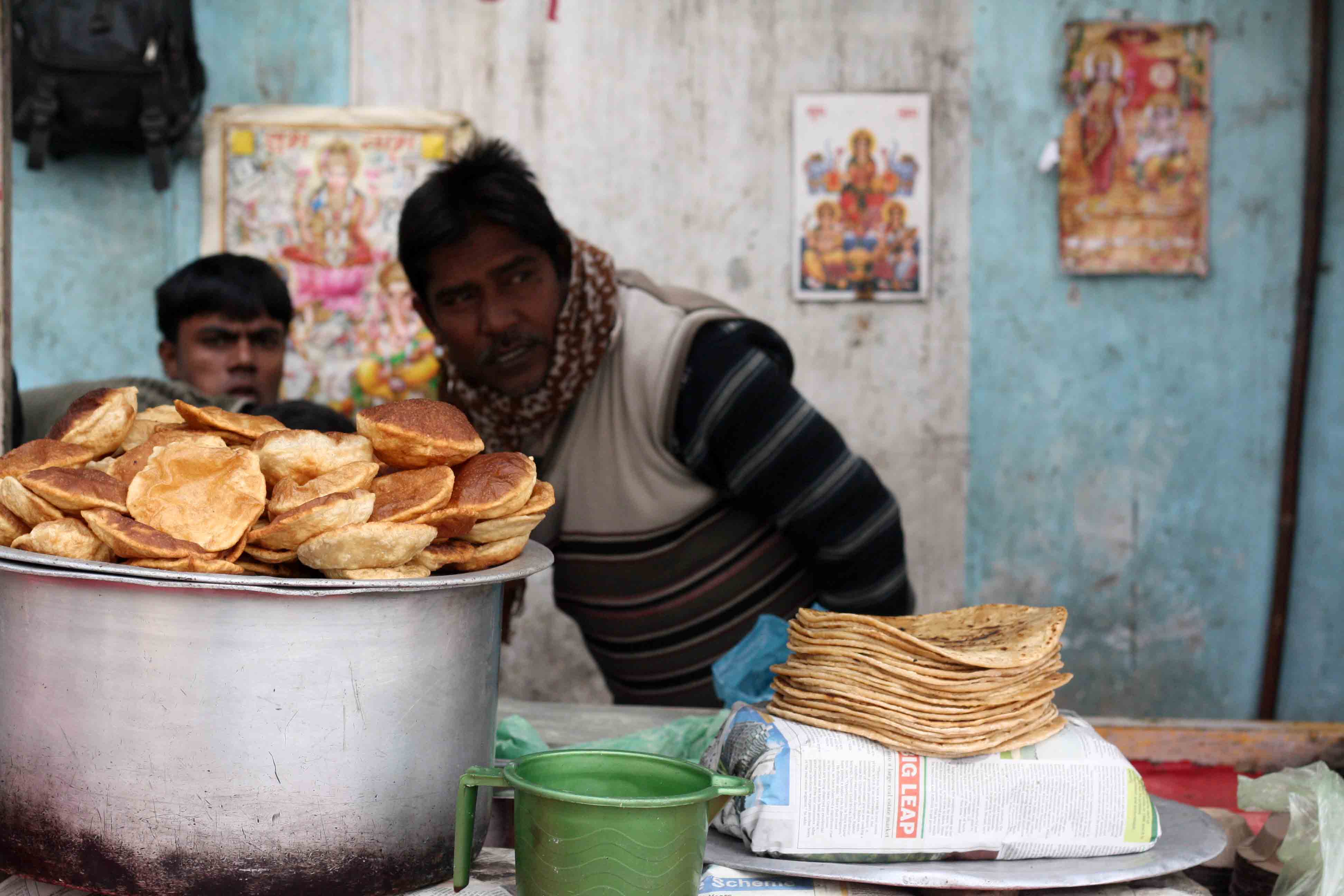 It’s 9pm. The cart is barely visible in the dark. But the stack of lukewarm puris sits on it like a beacon, illuminated by the gas lamp. The pale glow of the light is reflected off a blue plastic mug, half-filled with mango pickle. Two large vessels, each covered with a thali (plate), are in the shadows. One has aloo subzi; the other is filled with rice.

This little mobile establishment, rather inviting to the hungry, is one of a dozen similar food carts lining Tagore Road, opposite the Ajmeri Gate exit of New Delhi railway station, very close to the sleek Airport Metro Express building.

These thelas, or carts, are run by men who come from the impoverished regions of Bihar, Jharkhand and West Bengal. Their daily patrons are fellow migrants from the same states who make a living by pulling rickshaws or hauling loads in the nearby Chawri Bazar, Daryaganj and Mori Gate. Most of them sleep on pavements. Their meagre earnings go into supporting their families back in the villages and buying meals from these carts. A plate of subzi and five puris is priced at 15 rupees here.

This is a meal fit for a man living below the official poverty line. In July 2013, India’s Planning Commission declared that any individual who can spend more than 33 rupees a day in urban areas is not poor. In protest, Delhi Bharatiya Janata Party (BJP) president Vijay Goel mailed money orders of 33 rupees each to Congress party leader Sonia Gandhi, Prime Minister Manmohan Singh, deputy chairman of the Planning Commission Montek Singh Ahluwalia and Delhi chief minister Sheila Dikshit, challenging them to survive for a day on that amount. A few days later, Time Out Delhi presented its readers with four diet plans for that amount, with choices of snacks such as samosa, chhola kulcha and Candyman Choco Double Eclairs toffee.

The city magazine would have found more options on these food carts. Priced at 20 rupees, the most expensive item here is the fish curry.

“Machhi (fish) is the main dish for our customers, who are mostly Bihari and Bengali labourers,” says Anil Kumar Mishra, a cart owner with paan-stained teeth, who is from Allahabad in Uttar Pradesh. Explaining the steps that go into the making of the fastest-moving item (it’s already over by now), he says, “We get rohu (a river fish) every morning from Azadpur (vegetable market). It is washed with clean water, which we purchase from a tube well operator in Kamla Market. The big jar of water comes for 20 rupees, but we spend 20 rupees more to transport it here on a rickshaw. Then we make a mixture of haldi (turmeric powder), besan (chickpea flour) and salt and coat the fish with it, which we fry in refined Ruchi Gold.” Raw mustard paste and tomato go into the gravy.

It is a few minutes past 10. Two men walk past, one of them carrying a heavy suitcase, impervious to the tangy food smells. Now only a few carts have customers — they all are eating quietly. One lungi-clad man dines sitting on his rickshaw, his back to the neon sign above the railway station building that proclaims its name in English, Hindi and Urdu. A native of Purnea district in Bihar, he says, “The food here is similar to the way my wife makes it in the village. But it’s not masaledar (spicy) enough here.”

This bunch of food stalls catering to the homeless but employed migrants is not the only such cluster in the city. They are spread out in various localities, wherever such men live and work.

Across the road, a boy is peeing under a street lamp. A group of coolies huddle close by, having tea (the coolies have a dedicated canteen in the railway station where a meal costs 20 rupees). The Airport Express Metro station dazzles with its white fluorescent lights and advertisement banners. One displays the American watch brand Skagen.

Done with his business, the boy strolls over to Mishra’s cart. “Muhammed Shoufil is my new helper,” says the thela walla.

A cart could be manned by three people: the owner, the kaarigar who helps with the cooking, and the “chhota labour” or helper, usually an underpaid adolescent who does the dishes, peels the vegetables and handles other odd jobs.

Mr Shoufil, who says he is 18, arrived 10 days ago from his village in Bihar. “I came on the Seemanchal Superfast (Express). Papa nahi hain (father is no longer alive). We are a very large family. There’s nothing at home. But here I don’t get even a minute to breathe during the day. At night, I have to sleep next to the Metro station. I think I made a mistake coming to Dilli. I want to go back home.”

Mr Mishra says, “How will you then look after your mother?”

The afternoon hours — from 12-2 — are the busiest. That’s the time when trains arrive from Bihar. “Every day, they bring the locals,” says Mr Mishra, explaining that the thela vendors use the term “local” to describe the travellers from Bihar, West Bengal and Jharkhand. “They are brought by thekedars (contractors) to work on the farms of Punjab,” he says. “Before taking a connecting train to Ludhiana or Jalandhar, they eat at our stalls. The thekedars bring the labourers here because they know it’s cheap and familiar food for them.”

Gesturing at his white vest and green-chequered lungi, Mr Mishra, who has a swastika pendant around his neck, says, “We thela wallas are fair game for the police and the MCD (Municipal Corporation of Delhi). We have no izzat (dignity).”

Pointing at the nearby GB Road, the city’s red light area, he says, “Our story is the same as of those prostitutes. Gaali khao aur kaam karo (swallow the insults and keep working.)”

It’s almost 11pm. Calling it a day, Mr Mishra says, “These pans and plates will go down under the thela and I will make my bed on top. Tomorrow, as always, I will wake up at 5am and head to the railway station for latrine. There will be a long queue and it will take about an hour. Add half an hour more if I decide to take a bath. Then I’ll come back to cook the fish, the dal, the subzi and the parathas.”

Mr Shoufil sits down on the pavement. Soon, he must get up and do the dishes. And he still has to have his dinner. At least, it’s free for him.