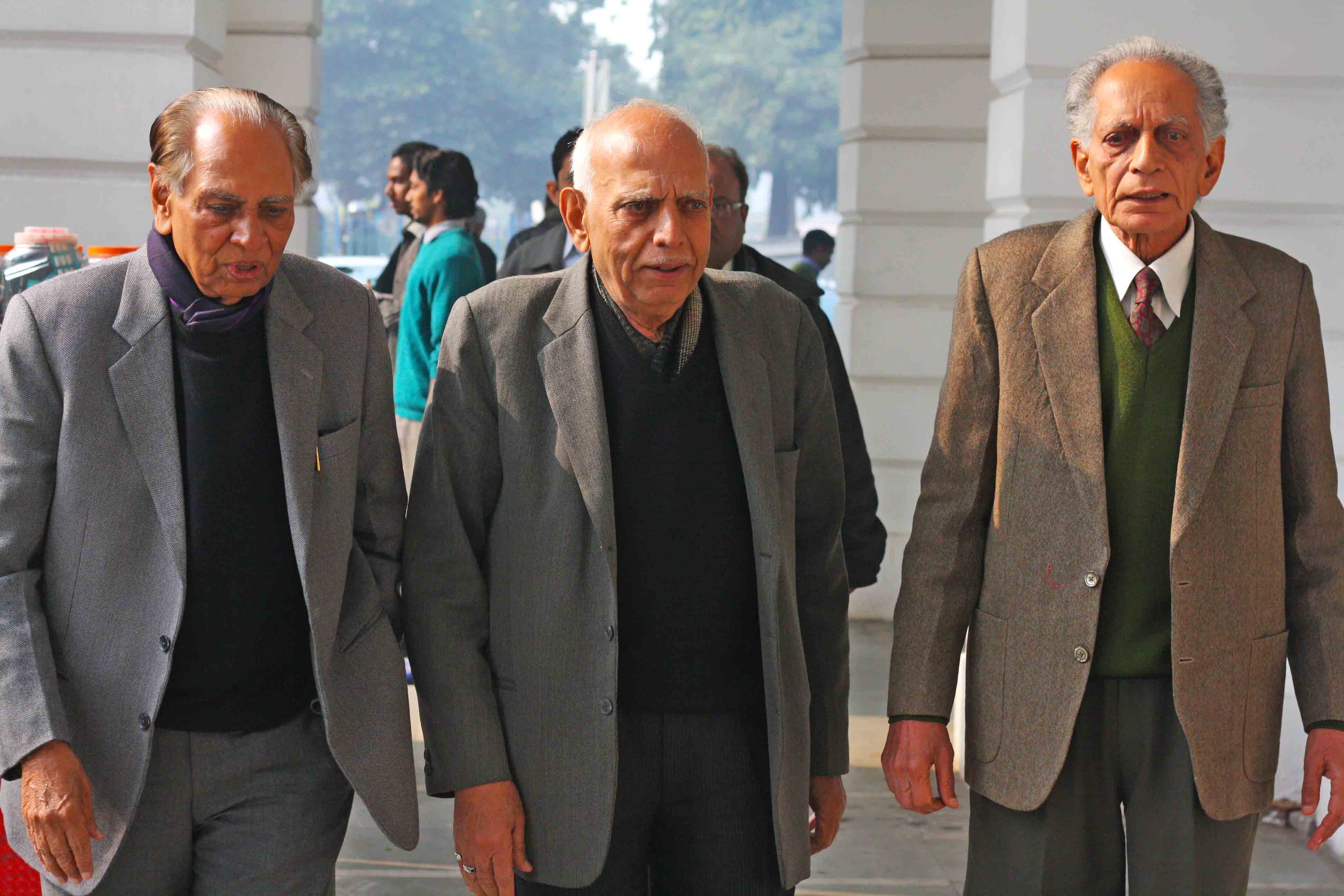 This is the story of three men in their mid-80s who meet every Sunday in Connaught Place for coffee. The rendezvous always lasts 2 hours, starting 10.30am. The friends have been following the custom for more than half a century. No matter if on that day there is a birth in their families, or a wedding, or — as happened once — a medical emergency.

“We have never admitted a fourth person in our circle,” says the soft-spoken Yash Paal Vij. “Each of us gets his turn to pay the bill,” says the hearty Satya Pal Sethi. Madan Gopal Gupta, who completes the trinity, is not present. His wife has just returned home from hospital. However, he cannot be penalized. Today isn’t Sunday, the mandatory day for the get-together. It is Wednesday, one of the three weekdays on which the friends have recently started meeting up, a new habit following their retirement a couple of years ago. To this weekday meeting, a fourth member has been admitted.

Mr Vij has arrived with his younger brother Vishwa Nath, who often accompanies him due to Mr Vij’s advancing years.

The Sunday meetings began in the 1950s. Initially, the friends gathered at Gaylord, a restaurant in the Regal cinema building. Following its closure a few years ago, they shifted their loyalty to Volga in B block. That, too, closed. Then they settled for United Coffee House in E block. This is where we are — at their regular table, close to the cashier’s desk.

“Here you see decent members of society,” says Mr Sethi. “Guests don’t shout at waiters,” says Mr Vij. The dim light of the giant chandelier falls on the furniture, turning each table into a pool of soft gloom.

The friends never order snacks. “We feed each other with gossip,” says Mr Vij. “If we are not updating each other on our grandchildren, we talk sport and politics.” Following a very short pause, he says, “Of course, at Gaylord, we always had the delicious chicken patties. The cheese balls were also very good.” Mr Sethi reminisces: “Gaylord was majestic. It had its own bakery. The dining hall was huge.”

Such a traditional and centrally located restaurant-cum-bakery usually serves another “sweet” purpose, and Gaylord did so too. Like the Flurys in Calcutta, it was the place where a prospective bride and groom often first set eyes on each other. Chaperoned, of course. “They would meet there along with their parents and relatives to inspect each other,” says Mr Sethi.

Indeed, Mr Vij was introduced to his future wife Krishna in a similarly arranged setting at Standard, the restaurant that used to be above Regal.

The long span of the friendship these three men share helps us chronicle the Delhi landmarks where their bond grew, matured and solidified. Mr Vij, Mr Sethi and Mr Gupta first met as classmates in Laxmi Narayan Girdhari Lal Khatri Upkarak Senior Secondary School in Old Delhi’s Fatehpuri. It was the decade of India’s independence. The boys would go to Mirabelle restaurant at Kashmere Gate for pineapple ice cream, Mianji’s stall at Mori Gate Chowk for a banta drink, and Bhagat’s at Sadar Bazar for chana bhatura.

They all graduated together from Shri Ram College of Commerce and then moved into different professions. Mr Vij trained as a chartered accountant. Mr Sethi entered the automobile business and became the primary dealer of Bosch in Delhi. Mr Gupta took over the family-run Madan Babu & Co., a garments store in Chandni Chowk. The early Sunday sessions were an attempt to keep up with each other at least once a week. For many years, Mr Sethi picked up Mr Vij and Mr Gupta from their houses in his chauffeur-driven Fiat and together they would head to Connaught Place.

Today, Mr Sethi, who lives in New Friends Colony, travels to his Sunday appointment by Mercedes. Mr Gupta commutes from his bungalow in Noida’s posh Sector 15-A in a BMW. Mr Vij, who lives in a grand old-world mansion in Roop Nagar, takes the Metro.

All three men married in the 1950s. How did their wives react to the Sunday club?

“During the first few months of our marriage, our spouses thought that they, too, were part of our weekly ritual,” says Mr Vij, “but soon they became reconciled to the reality that it was only for us bachelors.” Mr Sethi adds, “Our women appreciated that we still had breakfast and lunch with them.”

Married men who consider themselves “bachelors” and enjoy a boys’ day out every week would naturally have a sense of adventure, even if limited in scope. Over the years, the friends have tried almost all the watering holes that have come up in Connaught Place. In February 2013, Starbucks opened in A block. They were there on the second day. “As senior citizens, we were allowed to jump the long queue,” says Mr Vij. “There were only young people inside. We quickly swallowed our coffee and left.”

It seems that no place can hold a candle to the mythical Gaylord. “We always sat in the centre row,” says Mr Sethi. “Sam Manekshaw (the former Field Marshal) was a regular to Gaylord. He always had chicken patties and coffee. (Parkash Singh) Badal, who is now Punjab chief minister, was also a regular.”

Gaylord was not the only place to see and be seen in Connaught Place. K.D. Singh, the 72-year-old owner of The Book Shop in Jor Bagh, sighs deeply each time he muses on the Connaught Place of his college days. His impressions of the colonial-era commercial district paint it as some sort of a modern-day Hauz Khas Village — a delicious jumble of pubs, restaurants and jazz music. “The young always went to Volga, where the Hecke Kingdom Quartet reigned as the city’s most popular jazz band,” says Mr Singh. “Gaylord was for the married. It was more formal than Volga. It had a dance band. It was said to be so addictive that people just carried on with it for years and years.”

Connaught Place had a number of such happy havens in the 1960s. The glamorous Laguna was known for its fountains and saxophone player Rudy Cotton. Alps was patronized for saxophonist Braz Gonsalves. Standard was famous for Frank Dubier, who was said to play the trumpet like jazz great Miles Davis. Wenger’s, the pastry shop, had a restaurant on the first floor that organized chamber music. York was famous for the cabaret.

In 2003, during the lunch hour at Gaylord, a chunk of plaster fell from the ceiling, injuring two diners. The restaurant underwent renovation but by 2007 it was history.

The friends shifted their loyalty to Volga, which had already seen its best years. “We soon started hearing from waiters that the place might shut down,” says Mr Vij.

The newspaper reports of 2010 tell of Volga’s sobbing stewards informing customers about its impending closure.

While new restaurants have surfaced sporadically in Connaught Place, most of the old landmarks have been replaced by chain outlets. B-24, home to Capital Boot House, became the address of a McDonald’s. The Rangoon photography studio at 58, Janpath, gave way to a Pizza Hut. And Volga to a Levi’s showroom.

It is easy for the romantics among us to mourn the unseen old times. Isn’t yesterday always better than today, especially in Connaught Place, whose recent renovation projects have been missing one deadline after another?

“Today, Connaught Place is more beautiful,” says Mr Gupta, who spoke from home on the phone while tending to his ailing wife. “In the 1960s, it looked empty. It used to shut down for 3 hours every afternoon for lunch. Today, it is cleaner, looks more symmetrical and is free of unauthorized vendors. It attracts more people, is more charming and has more life.”

Asked what he and his two friends would do if, god forbid, United Coffee House shuts down as well, Mr Gupta says: “Nothing would be lost. We would shift to Embassy.”

And what if that closes too?

“So what!” says Mr Gupta, “Connaught Place will always be there.”

* All b&w photos are sourced from the net