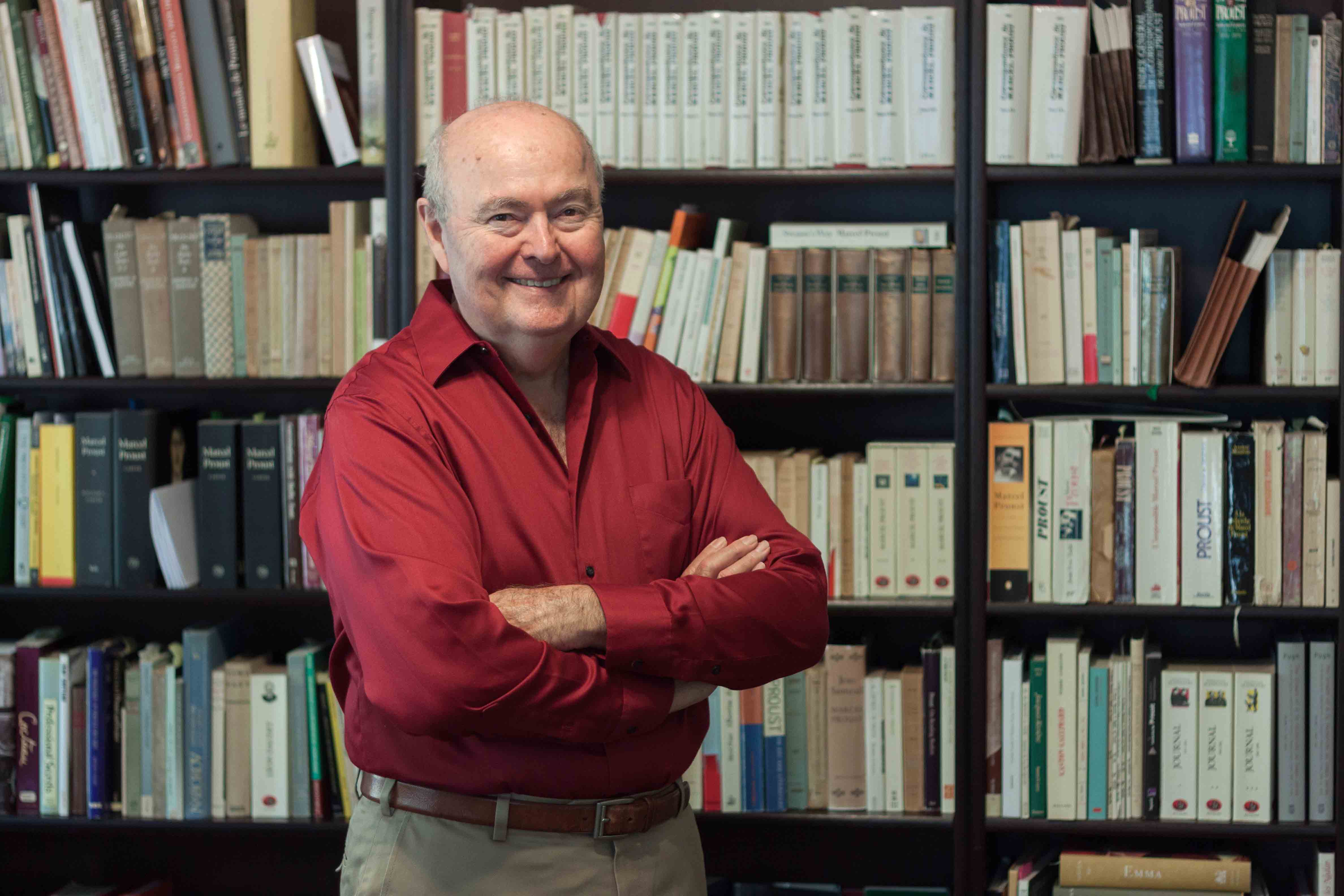 How many people do you know who have actually read In Search of Lost Time in its entirety? Marcel Proust’s French novel, À La Recherche Du Temps Perdu, has seven volumes and more than a million words — the first volume completed 100 years in 2013. Entombed with the label of a classic, the book suffers from the undeserved reputation of being a tough read.

Indeed, the late American scholar Roger Shattuck began his award-winning 1974 treatise on the French novelist, titled Proust, by saying, “Among the handful of literary classics produced in this century, Marcel Proust’s In Search of Lost Time is the most oceanic — and the least read. Joyce and Kafka, Faulkner and Camus sell hundreds of thousands of copies. Proust sells barely in the thousands. His substantial reputation as an extreme case of something — long-windedness, psychological vivisection, the snobbery of letters, salvation by memory — rests not on wide readership but on a myth of uniqueness that often hides his true attractions.”

US-based William C. Carter, possibly the most renowned scholar on the French novelist in the English-speaking world, helps dispel the thick mist of supposed incomprehension that conceals Proust’s work from most of us.

Author of Marcel Proust: A Life, Mr Carter has been hailed as “Proust’s definitive biographer” by the formidable literary critic Harold Bloom. Distinguished professor emeritus of French at the University of Alabama at Birmingham, the 72-year-old professor is in the middle of a project of Proustian proportions — he is revising and annotating C.K. Scott Moncrieff’s landmark translation of In Search of Lost Time; his work on the first volume was published by the Yale University Press in 2013. Mr Carter also manages the website Proust-Ink: The Life And Works of Marcel Proust. He chatted with The Delhi Walla over the internet:

When did you first become aware of Marcel Proust?

I had always heard of the famous writer, but it was only in graduate school at the University of Georgia (US) that I began to read Proust, not in a course, but because he was one of the many authors on the reading list that I had to read to prepare for the oral exams for the MA degree. I was 24.

Can you recall your first experience with In Search of Lost Time?

I don’t remember how long it took me to complete it, because by the time I read the entire novel, I was a graduate student at Indiana University (US) working on my PhD I was reading it on my own, not for a course. That was a long time ago. I believe that I read it fairly quickly or rather I was reading it steadily. My favourites were the Narrator, Swann and Charlus. The Narrator because he is the hero and his first-person voice is among the most engaging and seductive in all of literature. Swann, because he in many ways is the surrogate father of the Narrator and his many temptations will also be those that will tempt the Narrator but the latter will ultimately avoid repeating Swann’s mistakes and triumph where Swann failed. Charlus because he is the most colourful and outrageous and entertaining character in the novel and perhaps of all the characters in the genre.

Is the novel really unreadable?

I don’t find it difficult. It is rich and complex and demands an attentive reader but I find Proust very engaging, obviously, and his prose has the quality of poetry or music. By the way, I was always reading it in French. I never read it in English until many years later when I began teaching it to undergraduate students here at the University of Alabama.

How many times have you read In Search of Lost Time?

I’ve really lost count. I’m guessing 10-12 times. I usually read it from start to finish, not dipping in here or there. Of course there are always passages one is looking for to quote in an article or a lecture.

All great novels change the way we look at the world. Is it true that the impact made by reading Proust’s novel is greater than many other works?

I believe so. In Proust’s case, I think he helps us to see the world as it really is, not only in its great beauty and diversity, but he makes us aware of how we perceive and how we interact with others, showing us how often we are mistaken in our own assumptions and how easy it is to have a biased view of another person.

How has In Search of Lost Time affected you over the years?

It has given me a steady source of reading pleasure and, of course, it has greatly influenced my career as a university professor and as a public intellectual.

Is Proust as great as Shakespeare?

Ah, well, he fares well in comparison with any of the great writers. He comes close to being as quotable as Shakespeare. And I think the psychology and motivation of Proust’s characters is as clear and as complex as are those of Shakespeare’s characters.

Being one of the world’s foremost Proustians as well as ‘Proust’s definitive biographer’, tell me about your library.

I prefer, for the most part, reading writers on other writers. Shelby Foote on Proust and Faulkner, Virginia Woolf on Proust or anybody. I read a lot of non-fiction. My favourite novelists are Iris Murdoch and Virginia Woolf. I also enjoy Tom Wolfe, although I don’t think his recent works are as strong as his earlier ones. I don’t know how many books on Proust I have. I’ve never been one to count books or collect books, per se. I have probably several hundred books on Proust, many of them given to me. Fortunately, our library has probably the third largest collection of Proust material in the world, so I can easily find what I need there.

Is there any character in In Search of Lost Time for whom your feelings have evolved over the years of your engagement with Proust?

I think that the Narrator’s love for Albertine and his recognition after her death that he really did love her and that he behaved badly towards her is something that it took me a while to appreciate fully. I came to realize that the Albertine cycle is really a beautiful tribute to her and to all those whom we love passionately but sometimes not well or wisely. I think many readers are slow to see this or fail to see it although, as I was slow to see it. I tried to state this interpretation in my most recent book Proust in Love.

You plan to annotate the first English translation (by Scott Moncrieff) of the entire novel.

This is a huge project that will take six-eight years. I am already in my third year and have nearly finished In the Shadow of Young Girls in Flower (the second volume). The effort is tremendous in that I am comparing every word of the original to Scott Moncrieff’s translation and also annotating the text. While his translation is magnificent, I am making many more changes than I originally anticipated. It’s very challenging but it’s a labour of love and I am happy that Yale University Press entrusted me with this endeavour.

I speak for many Proustians when I say that it is difficult to let go of In Search of Lost Time and read other good novels, but then other books also need to be read, sometimes again and again. What advice do you have for people like us?

I think it’s important to read again all the books that we really love and that bring us such pleasure. I also believe that it’s important to discover new writers and to read the major works of non-fiction. I guess my only advice would be that if you begin a book and it truly doesn’t speak to you or interest you, then put it aside and go on to the next one. I think, regarding Proust, that once you are truly familiar with the book, it’s easy to find time to pick it up and read it again. Such reading should never bea task but always a pleasure.

Is it necessary for a Proustian to visit Paris at least once in his life?

There are many excellent reasons why everyone should visit Paris and as often as possible. Yes, one can see many of the places that Proust knew and describes in his novel. His apartment doesn’t exist as such any more, although you can admire the façade and read the plaque outside 102, Boulevard Haussmann. Until a few years ago, it was possible to visit the Proust bedroom there, although it was completely stripped of furnishings. An excellent way to enjoy Proust’s Paris when you cannot be there, is to visit our website Proust-Ink.com and see my colleague Nic Drogoul’s portfolio of Proust places. Nic photographed these in the fall of 2012 and in anticipation of the 2013 centennial of Swann’s Way. We will soon announce that these photographs are available for purchase in various sizes in a limited, signed edition.

A life with Proust