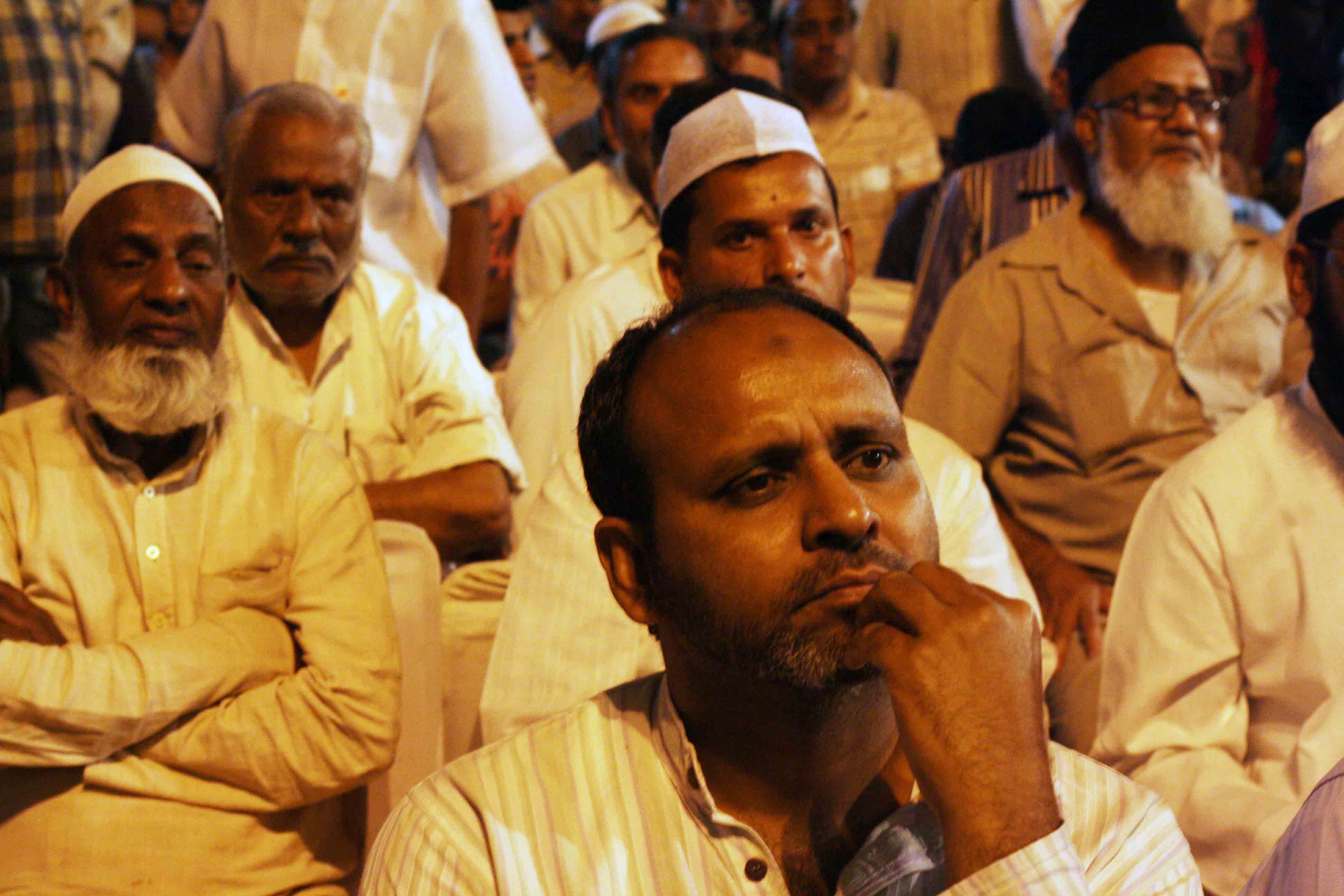 The view from the Mughal-era mosque.

“This is my life’s first vote for the Lok Sabha,” says 22-year-old Muhammad Udhav, “and I will give it to a new party.”

Sitting in his family owned shed of spare car parts in Old Delhi’s Chatta Sheikh Manglu, this school dropout is explaining why he will vote for former TV journalist Ashutosh, the denim-clad, gamcha-carrying candidate of the Aam Aadmi Party (AAP) in Chandni Chowk, one of the seven parliamentary constituencies in the Capital.

“I’m a Muslim and yet I don’t want to back the ‘secular’ Congress, which has hardly done anything for us,” says Mr Udhav. “To shift support to the BJP (Bharatiya Janata Party) that has greatly damaged my community is unthinkable. But now there is AAP.”

The estimated 140,000 Muslim voters of Chandni Chowk are traditionally considered to be Congress loyalists — the supremely arrogant Congress leader and Union law minister Kapil Sibal handsomely won the last two elections from here, and is again in the race. But the self-proclaimed holier-than-thou AAP, which originated from an anti-corruption agitation in 2011, seems to have empowered voters with a new alternative.

The country’s smallest Lok Sabha constituency in terms of area, with the lowest number of registered voters in Delhi at 1,392,395, Chandni Chowk stirs up images of biryani, parathas and Jama Masjid. Actually, it consists largely of less romantic locales such as Shakur Basti, Pitampura, Rani Bagh and Model Town. Baniyas (mercantile community) constitute 40 percent of the electorate, and the Scheduled Caste/Scheduled Tribe community is present in significant numbers. But the quarter around the Mughal-era grand mosque throbs with history, and in 2014 election at least some of its mostly Muslim residents are reviewing their long-established political leaning.

Perhaps the most astounding aspect of the election season in the Walled City is the absence of banners. The walls are splashed with posters of English classes and acne-removers but the beaming faces of the three main candidates are missing: Kapil Sibal, Ashutosh and ENT surgeon Harsh Vardhan, the BJP contender who could have been Delhi’s chief minister if AAP had not formed the 49-day government after the 2013 assembly elections.

The Wali Unisex Salon in the madly chaotic Bazaar Chitli Qabar is packed with male customers. Two young men are discussing film actresses. “Sunny Leone has more sex than Kareena (sic) but she has to work on her expressions,” says Muhammad Yaseer. The 22-year-old college student is getting his hair spiked. On being nudged to apply his analytical skills to the other relevant subject of the day, he says, “I’m not much into politicians but Arvind can make things happen.”

Referring to AAP leader Arvind Kejriwal affectionately by his first name, Mr Yaseer says: “To be honest, I don’t care much for Ashutosh but I want Arvind to win. All the people in my family believe that Arvind can change the country. I praise Arvind even to my girlfriend although she’s only 17 and not eligible to vote.” Mr Yaseer says that he has been sharing the PDF of the Hindi translation of Mr Kejriwal’s book Swaraj on his Facebook page, though he himself hasn’t read it.

Muhammad Rafi, the 23-year-old stylist whose practised hands are fashioning Mr Yaseer’s new bold look, has admittedly “done no research on Kejriwal” but has insights on the BJP’s Hindu fascist prime ministerial candidate who, as Gujarat’s Chief Minister, benignly presided over the rapes and killings of thousands of Muslims in that state in 2002. “(Narendra) Modi has treated Muslims very, very badly,” he says, “but I don’t think he could do that again if he comes to Delhi. On Sunday, I saw Harsh Vardhan walking down the street. Do you know he was born here in our Purani Dilli! I’m no supporter of the BJP but he does seem to be a man who would visit us even after becoming our MP (member of Parliament).”

The salon’s 30-year-old owner Waseem Ilahi grins, saying: “Sibal had chai (tea) with us in this very shop when he was campaigning in the last (national) elections. After that day we did not see him for five years.”

Perhaps that’s an exaggeration. Yet, each of about two dozen people The Delhi Walla spoke to in the Jama Masjid area complained of very rare sightings of their current MP.

“Some people here are uncultured and talk back to Sibal saab, taunting him that only now he found time to remember them,” says Naimuddin Salmani, another hairstylist down this serpentine lane. He runs a salon that has a Justin Bieber poster and one of Mecca on its yellow walls.

In his 50s, Mr Salmani claims to be a hyperactive Congress party worker. He says that when the party holds public meetings at Chitli Qabar Chowk, it is he who gathers the crowd by summoning people over the loudspeaker. Defending his party candidate, he says, “Sibal saab could not come to the area as frequently as he wanted to but he set up offices in many wards for residents to file complaints about water supply, power bills, school admissions and medical treatments.”

He takes out an old edition of the local Urdu newspaper Roznama Khabrain, and points to a grainy black and white photo — Mr Salmani is standing alongside the current Chandni Chowk MP. “I was heading a delegation which asked Sibal saab to start schemes for the remarriage of young widows.” Immediately afterwards, the loyal soldier changes his tone, saying: “I have served the Congress for 26 years and the party had been in government (in Delhi) for 15 years, and not once was I appointed a member of the Haj Committee, or the Urs Committee, or the Murga Mandi committee. I recently got feelers from AAP. I felt important but I refused.’”

Perhaps realizing the tougher nature of the fight, the entire Sibal family — wife and sons included — are making visits to the area. “I met his son Mister Amit the other evening in Turkman Gate,” says Mr Ilahi. “He seemed different from the young men here — very well-behaved and educated.” The discontented Mr Salmani has nice words for the wife: “Mrs Sibal has been addressing many corner meetings. She speaks very good Lucknawi Urdu and talks about threats to secularism and her love for biryani and kebab.”

Mr Sibal also happens to be an anti-Semite. On one of the election meetings held in the Muslim-dominated area one late evening, a speaker on the stage referred to Mr Sibal’s electoral opponents as “Hindus and Jews”, implying that these two communities were hateful and could not be trusted. The Congress candidate did not object.

It is behind Jama Masjid that I finally spot props of the election campaign. Muhamamd Arfeen and Muhammad Irfan are sporting AAP’s trademark Gandhi caps.

“You just missed the procession,” says Mr Irfan. “They are heading to Chawri Bazar.”

Adjusting the starched cap on his head, Mr Arfeen says: “Our country is facing two big crises. The No.1 crisis is corruption and the No. 2 crisis is communalism. To get rid of both, we have to finish off the Congress and the BJP.”

Waving his arm disapprovingly at the garbage-strewn street as if our civic discourtesies too are the fault of these two parties, Mr Irfan says, “We must try AAP.”

At Chitli Qabar Chowk a group of five middle-aged Congress party functionaries are sitting in a room. All of them are dressed in white. “It could be true that some Muslims desire to vote for Ashutosh,” says Miraj Qureshi, vice-president of the party’s city district committee, Chandni Chowk. “But, you see, AAP is not very popular in (Chandni Chowk’s) Hindu areas. There the baniya vote is going to Modi. So, at the last moment, to defeat Modi, all the Muslims of Jama Masjid will have to vote for the Congress.”

The other men nod.