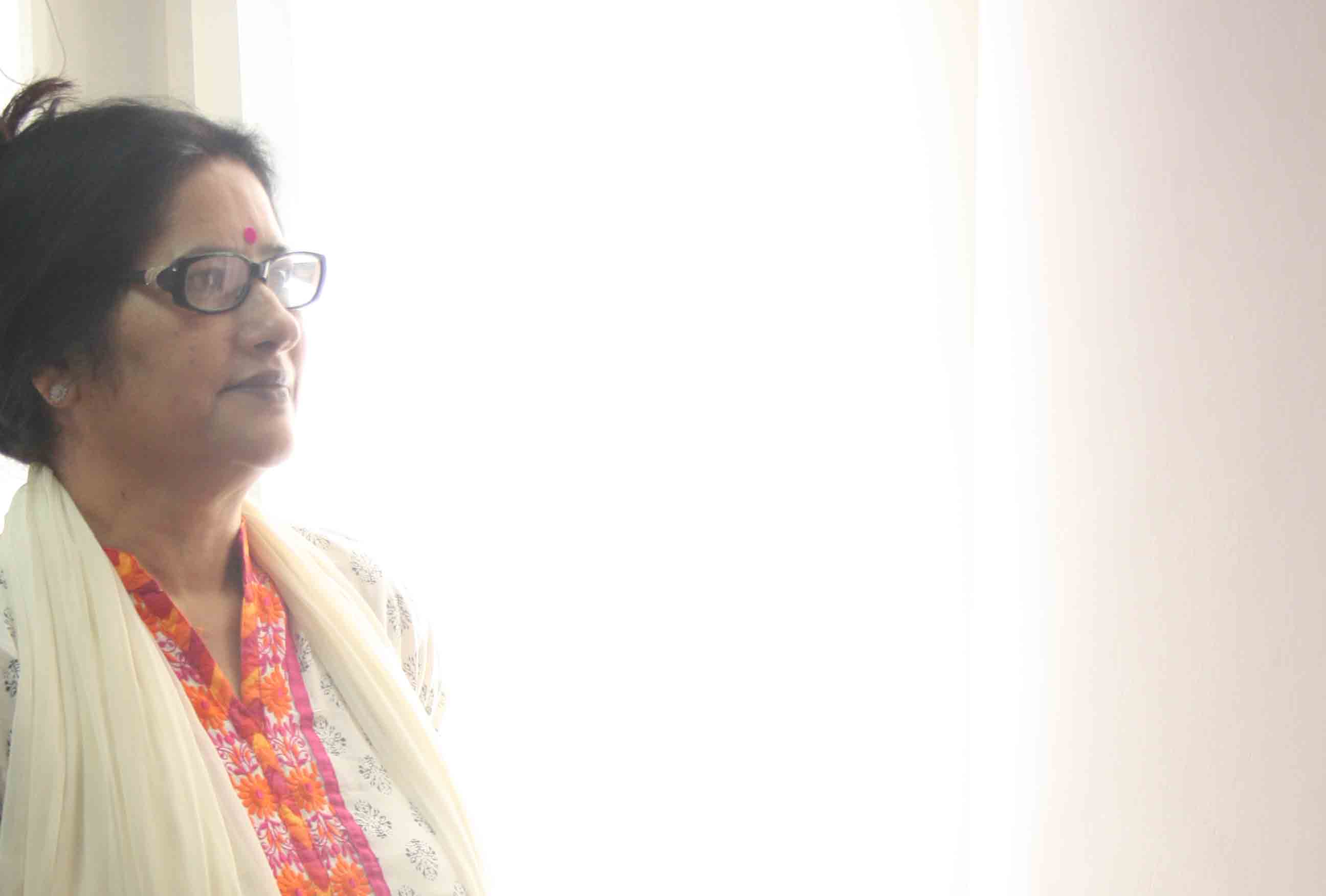 The Delhi Walla arranged to meet poet Sujata Chaudhry at her office in Dak Bhawan, a pale-pink government building in Parliament Street. In her 50s, Ms Chaudhury describes herself in her visiting card as a “Writer, Poet & Bureaucrat”. Although a Telugu, she writes in English and Oriya (she grew up in Odisha).

An admirer of Ramakant Rath, William Wordsworth, Gulzar, Pablo Neruda, Rabindranath Tagore and Sitakant Mahapatra, Ms Chaudhary says, “A poem is like a nuclear bomb. We should use it very carefully. Poetry is a form of art but it is also a scientific and rational device through which we can create awareness about the problems of the world in a soft and precise way.”

Although Ms Chaudhry has been felicitated in a number of poetry festivals, she says, “The recognition doesn’t really matter. Writing poetry makes me understand myself better.”

The General Manager (Business Development) in the Department of Posts, Ministry of Communications & Information Technology, Government of India, Ms Chaudhry has published eight books on poetry. She shares a poem with us.

My mother died yesterday
At 10.30PM. She was 73,
a mother of four and grandmother
of eight, she welcomed death
on my brother’s lap last night.
Doctors said it was a
painless diabetic heart attack.

Till the end she was active,
even though her legs were numb,
hands trembled, eyes semi-blind,
with diabetic cataract, burning
sensation all over her body
and needle marks on her wrinkled skin,
signaling total dependence on
insulin pricks for survival.

Many scenes from my life
flashed since last night,
and ended with the scene
on 10th October 2005, a Monday morning
preceded by a sleepless, disturbing night.
Hurriedly I ate the curd rice,
she had prepared, putting all her love
for me and departed for the
airport to catch the flight to Delhi.
I was in a pensive mood
and too busy in my thoughts
to bid a proper ‘goodbye’, not realizing
that it would be our last meeting.
Destiny always wins they say,
And Death arrives at the door silently.

My mother never asked for roses,
she prayed God for the best roses
for her children. Like a mango tree
she was firmly grounded and
gave us fruits, flowers, leaves,
and sheltered us from the rain
and scorching rays of the sun.
She weaved the magic of
south Indian delicacies and
did puja day and night for our welfare.

She was an ocean of simplicity,
patience, sacrifice, and understanding.
She was the eternal light house,
she was the bank, where I
deposited all my hurts and worries.
Like a tortoise nourishing her children,
by just looking at them,
my mother’s loving glances,
gave me confidence and security.
During my two months stay in
the Christian Medical College hospital
in Vellore, her comforting and quiet
presence, made me forget my pain and
come out of the jaws of death.

Like the moon on the night sky,
she made my world ‘special’ just
by being in it. She was the first
love of my life, on whose lap
I saw my first dream. She
taught me fundamentals of life
and made me what I am today.
I now realize the word ‘mother’
contained so many things,
I never got to say. I now know
how much love my mother
had for me, how her heart broke,
each time I shed a tear.
She was not a woman,
she was my mother,
she was not human,
she was my God. In this
extraordinary world, she was the
most ordinary person I ever met.

In a world of plurals and plenty
‘mother’ is always a singular entity.
We have plenty of dew drops to welcome
the morning sun, plenty of stars
to play with the moon, plenty of flowers
to beautify the garden, plenty
of rainbows to make the children
happy, plenty of Gods and Goddesses
to bless the devotees, plenty of brothers,
sisters, cousins and friends to
interact, on this crowded planet
but only one mother to grace
my universe and give me life.
She can take the place of all others
but her place no one else
can take. A fountain of pure and
deathless love, my mother
Gadi Anuradha Murthy, came
into this world on 28h November, 1932
and departed on 23rd October, 2005.