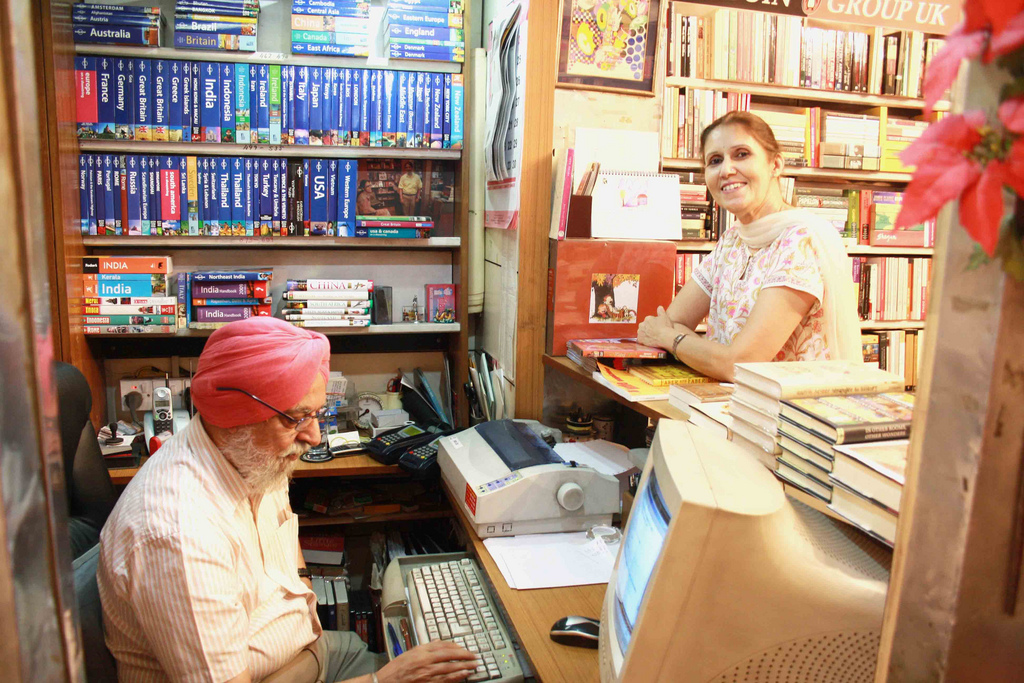 Kanwarjit Singh Dhingra, founder-owner of The Book Shop in the Capital, popularly known as KD, died of cancer on 21 May 2014. Mr Singh was 73. He ran the book store with his wife Nini and doorman Sohan Singh. He is also survived by his three daughters, Rachna, Pia and Mallika.

“I saw KD about two months ago. He looked weak but was cheerful,” says Mithva Krishen, a loyal customer. “I have been going to The Book Shop since I was a child. KD was one of my earliest friends in Delhi. He would never treat us like kids. He respected our opinions and would seek our views on this book or that. On my 18th birthday, my father’s (environmentalist Pradip Krishen’s) gift to me was to have the option to buy as many books as I wanted from KD’s store for the whole year. And so every week I would go to The Book Shop and return home with an armful of books. KD would laugh and tell me that I should not buy so many books or else my father would take back the present.”

The evening following his death, The Delhi Walla spotted Rajasthan’s Chief Minister Vasundhara Raje Scindia browsing for coffee-table volumes in The Book Shop (see photos below). It looked like any other day. Just as Mr Singh would have liked.

“What a lovely welcoming man he was,” says Geoffrey C. Ward, the US-based author who makes an annual trip to Delhi and always stops by The Book Shop. “Somewhere on the net this morning I saw a headline saying that KD ran a “quaint” bookstore. Nonsense. It was — and is — the living heart of literate Delhi. You never knew who you would find next to you in those narrow aisles but you could be sure there would be lively conversation about books and book-lovers and the state of the world. It was always the first stop my wife, Diane, and I made on our annual visits to Delhi and it’s hard to imagine not being able to walk through the door and have KD look up from his desk and say, “Hi Geoff, Hi Diane” as if we’d never been away.”

A proud old boy of St Joseph’s College in Nainital, the soft-spoken Mr Singh opened The Book Shop in Central Delhi’s Jor Bagh in 1970. Twelve years later, he opened a second outlet in nearby Khan Market which became extremely popular — Mr Singh told The Delhi Walla a couple of years back that even the late Gabriel García Márquez had visited it during a trip to New Delhi. It also made a guest appearance in Arundhati Roy’s novel The God of Small Things.

In those days Mr Singh would divide his time unevenly between the two shops. In the evening he would walk out of Khan Market’s front lane, stroll through the Lodhi Gardens and cross over to the shop in Jor Bagh, which was usually manned by his wife.

The store in Khan Market, which also stocked VHS tapes and LPs, was considered to have one of the best collections of English films and classical music in the city.

In 2006, Mr Singh had to close his Khan Market establishment because of the high rent. “The Book Shop at Khan Market can’t be replaced by me or anybody else,” he once told this writer. “It was at the right place at the right time.”

Conventional wisdom suggests that Anuj Bahri Malhotra of Khan Market’s landmark BahriSons Booksellers must have considered Mr Singh a professional threat — at least as long as The Book Shop was in the same lane. But Mr Malhotra says, “Though we never sat over beer to yak-yak-yak together, there was no rivalry between us. KD was too fine a man. He never uttered any wrong word about anyone. He was probably the most well-read and most up-to-date bookseller in the country.”

“I loved KD, and loved both his bookshops,” says author William Dalrymple, a regular at The Book Shop. “Such a good, kind, generous and gentle man and such excellent shops — up there with Ram Advani (in Lucknow) and Bahris as the best three in South Asia. Of all these, KD’s was the one where you wanted to linger longest, not least because he was there chatting warmly from behind the counter. It’s the end of an era and he’ll be much missed.”

Mr Singh was also instrumental in starting the Bookworm store in Connaught Place which was famous for its spiral staircase. That shop shut down in 2008. Before that, he helped set up a book store at The Manor hotel in Friends Colony.

In fact, the most eclectic bookshop in present-day New Delhi owes its existence partly to The Book Shop. “As a kid I would regularly go to the Jor Bagh store with my father,” says Ajit Vikram Singh. “I’m talking of the 1970s when KD hadn’t yet opened his Khan Market outlet. He would get me the books I wanted and on occasions would also make recommendations. The shop had friendly vibes and KD played nice music. I liked being there and I wanted to open a similar store.” In 1984, Ajit Vikram Singh opened the Fact & Fiction book store in South Delhi’s Basant Lok market.

“To me, happiness was always going to The Book Shop, chatting with KD and buying lots of books,” says Ms Krishen.

Until his failing health restricted his activities, Mr Singh would go daily to the National Sports Club of India at Pragati Maidan to play billiards. In the last winter of his life, however, the frail bookseller would often be seen sitting outside his shop, in the sun-soaked park in Jor Bagh. Dressed in a tweed coat, a handkerchief tucked neatly in his breast pocket matching the colour of his turban.

May I have another KD please