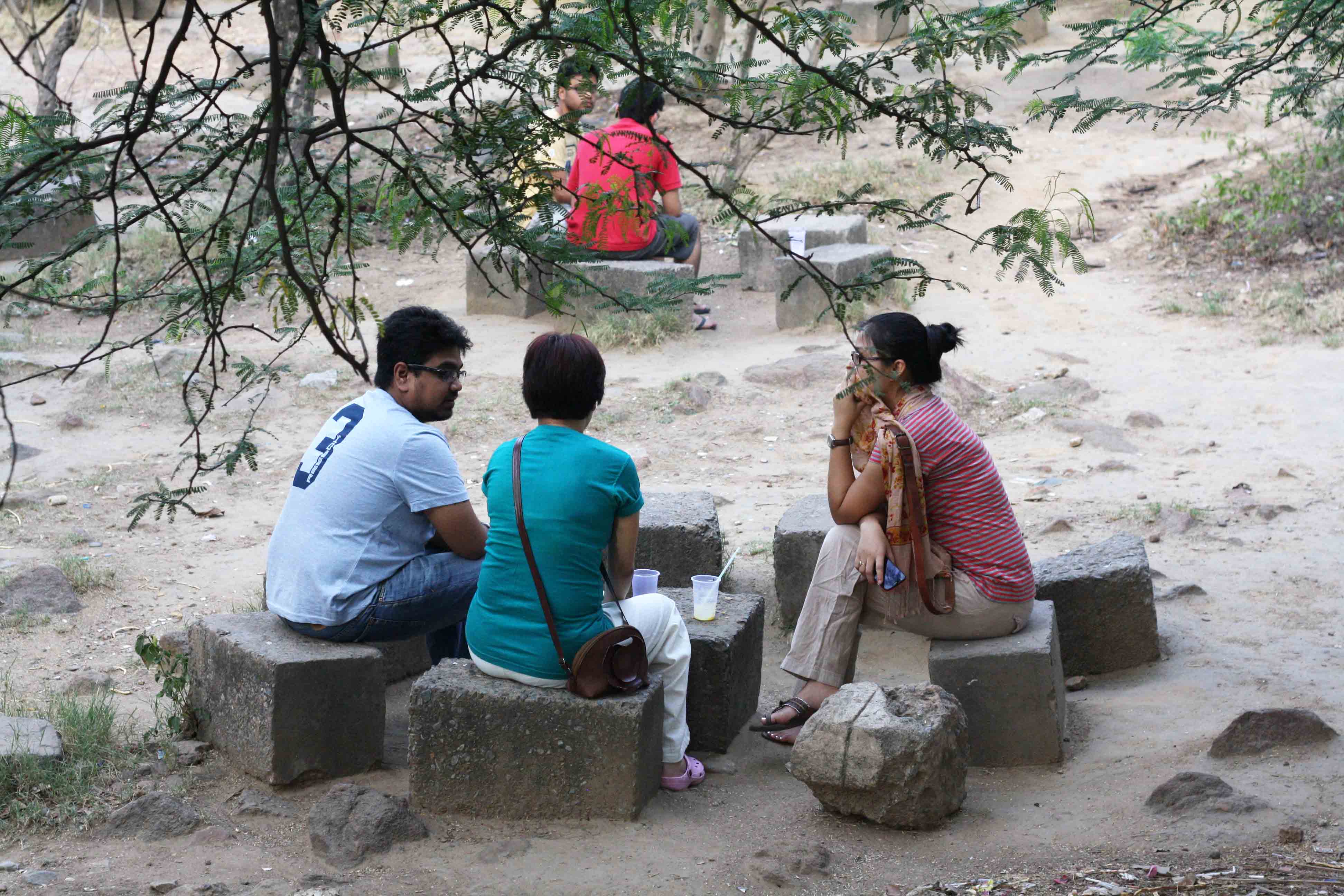 It is like a welcoming jungle — except for the guerrilla ants that are constantly invading your clothes. The gentle slopes are shaded with neem and keekar trees, and the air echoes with the wistful cries of peacocks, squirrels and cuckoos. There are ketchup-stained rocks to sit on. The snacks are dirt cheap and the talk apparently so radical that it could topple the system.

Founded by tea vendor Tejveer Singh in 1985, the Ganga Dhaba in the semi-wild campus of Delhi’s politically charged Jawaharlal Nehru University (JNU) is legendary for honing the world views of its students. Open daily from 4pm-2.30am, it is here that PhD scholars, civil service aspirants and academics/intellectuals discuss revolution, romance, etc., over endless chai and pakoras late into the night.

As it looks in the last week of June 2014, the Shangri-La may shut down soon. According to reports in the city’s newspapers, the university administration has issued an eviction notice to the eatery, whose contract period has already expired. Around three other small establishments on the campus have received similar notices.

On a recent evening, the daily patrons of the dhaba, which gets its name from a girls’ hostel nearby, present a brave picture of normalcy. Some loners are smoking cigarettes; others, in groups, are sharing plates of Maggi noodles.

Most students express their alarm at the existential threat looming over the dhaba, referring to its “special space” and “important role”, with one of them specifying that “our concern is not really about mango shake and aloo paratha but about something bigger”. A master’s student, Surya (who goes by one name), describes the Ganga Dhaba as JNU’s “intellectual and political sphere”. Another explains, “What JNU is to India, Ganga Dhaba is to JNU.” A couple of PhD scholars, who describe themselves as “activists”, talk of preserving the livelihood of the dhaba’s employees. They also espouse the eatery’s low-price menu.

Indeed, every person The Delhi Walla met at the dhaba is against its closure, and most of them have such powerful faith in its iconic position that they don’t believe it can actually close. They will probably approve of journalist Sudeep Chakravarti’s romantic description of the place in his 2008 book Red Sun—Travels In Naxalite Country: “The area around Ganga Dhaba is filling up with the evening crowd and loud drone of conversation. It’s amazing to see India gathered in this small patch of open space, all manner of racial and ethnic representation, a riot of gender, skin colour and language… ”

There is also a riot of slogans, hotter than the dhaba’s spicy aloo bonda, seen on the sales counter, which is plastered with posters from a wide spectrum of ideologies:

“Shame on the JNU administration”

“Say no to imposition of one particular language”

The poster that occupies the prime position says, “Ganga Dhaba is an important part of JNU culture… ”

And crudely scratched on a rock: “Another world is possible.”

The Ganga Dhaba idealists could create that other world with Ganga Dhaba itself. None of its 13 employees, whose meagre livelihood they feel so strongly about, is literate. This little band of subalterns who make the much-loved paratha and anda bhurji, among other snacks, say they can only sign their names in Hindi — they can’t read.

Take the bashful Jagram (who was also being addressed as Ram Singh). The 25-year-old makes parathas and chops onions and green chillies, and knows nothing about Jawaharlal Nehru, the prime minister from whom the university gets its name. “I studied only till class VI but could not learn anything,” he says. “Both the masters in my village school would sleep through the class hours.” Another cook, Anil Kumar Yadav, confused China’s Mao with Mamu, a local figure. Vijay Pal, who makes the dhaba’s popular chai and samosas, says: “We are aware that students come to Ganga Dhaba and talk about the country. They are patient if we happen to be slow with their orders but when we ask them to explain to us what is written on these posters, they often plead that they don’t have time.”

Migrants from eastern UP and Bihar, these workers live together in a two-room apartment in adjacent Munirka, along with the dhaba’s manager, Harish Kumar, and owner, Sushil Rathi. Their families are in their villages. The cooks get a day off just once in a month — they say they are treated kindly by the owner. Chopping a mound of onions, teary-eyed Jagram says he would not have to do this dreary task day after day if he had got a good education. “Perhaps, (JNU) students could give us daily lessons,” he says.

That depends on the priorities of JNU’s revolutionaries. But first Ganga Dhaba must sort out its survival strategies.

This side of the Ganga

Other scenes from the Ganga Dhaba