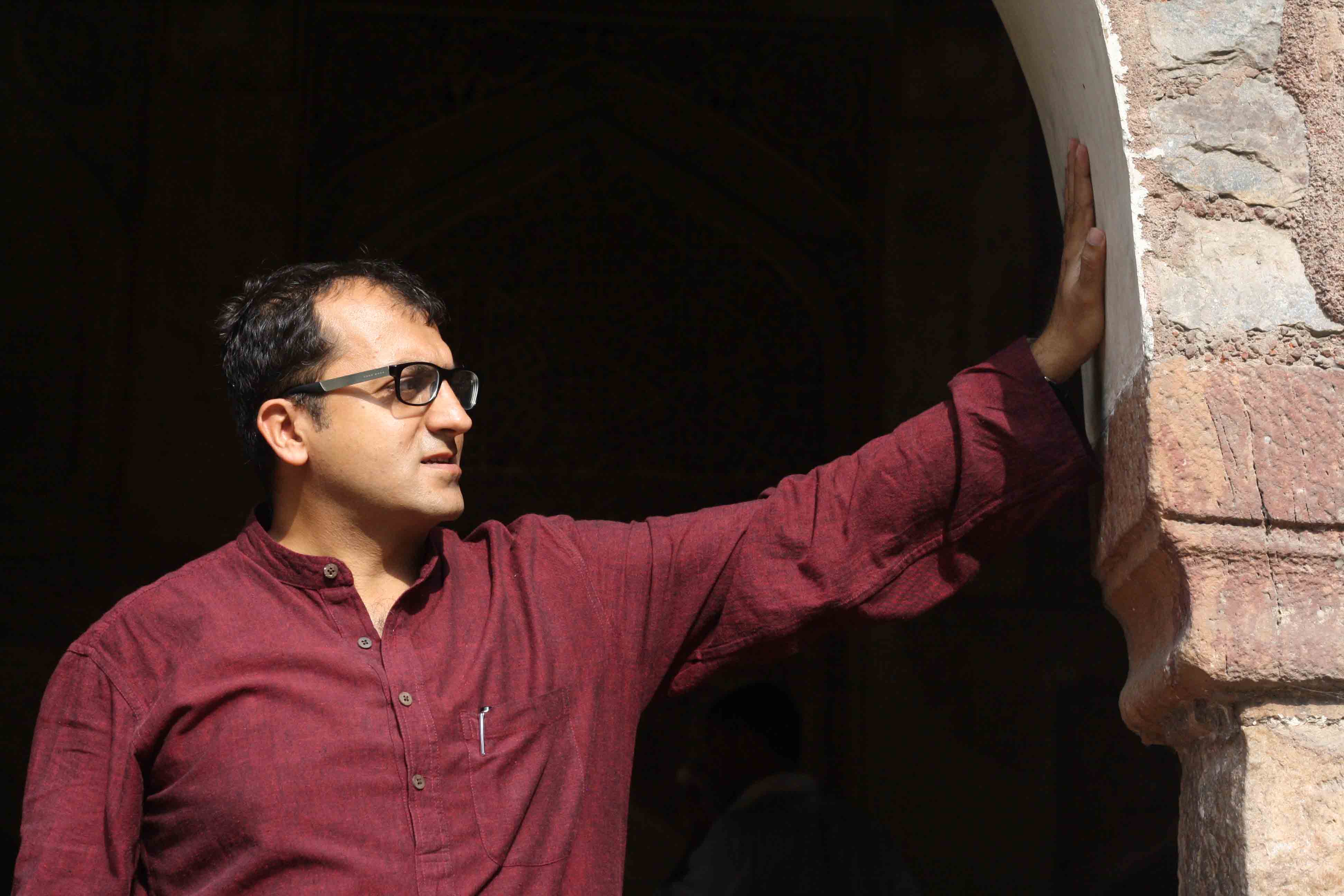 He was taking photos of an obscure Lodhi-era tomb in south Delhi’s Lado Sarai when a man rushed out of it, and attacked him with an iron rod. Ratish Nanda was hospitalized for a week.

Fifteen years later, standing fearlessly outside the monument, he says, “That man had occupied this gumbad (dome) and wanted to demolish it to build his garage.” Today, the tomb and Mr Nanda are both intact. In fact, Mr Nanda has become a healer of Delhi’s crumbling monuments. He has been involved in the conservation of more than 100 of them.

And in 2013, the team led by the 41-year-old conservation architect finished restoring the Capital’s Humayun’s Tomb, the first of the great buildings raised by Mughals in the subcontinent. “Since we started preliminary work on the tomb in 1997,” says Mr Nanda, “the number of its visitors has increased by 1,000%.”

Such a feat would have been impossible even for Mr Nanda — he has personally catalogued and photographed more than a thousand known and unknown monuments in Delhi — had he not been heading the India operations of the Aga Khan Trust for Culture (AKTC), a Switzerland-based philanthropic institution that focuses on revitalizing Muslim communities across the world.

Mr Nanda is always dressed in coloured kurtas, and there is a hint of sarcasm in his smile. He is married to a journalist whom he met when she was reporting on Humayun’s Tomb, but it was with some hesitation that he agreed to meet The Delhi Walla, saying: “Meaningful conversation can only happen when a lot of people put their feet forward. If one person takes the entire credit, it is unfair to the rest.”

Since 2007, Mr Nanda has been pioneering the Urban Renewal Initiative project in central Delhi’s historic but outrageously filthy Hazrat Nizamuddin Basti, a village just across the road from Humayun’s Tomb. Besides restoring dozens of medieval-era monuments in the area, AKTC’s venture (in partnership with government agencies) aims to lift the living standards of neighbourhoods around the monuments.

In a country where restoring a heritage structure often risks the forced removal of its squatter populace, the initiative to give people a stake in the preservation of their locality’s monuments is novel. And thankfully, it seems to be working. A 14th century stone well in the basti long abused as a dump has been detoxified. Urdu poet Mirza Ghalib’s derelict tomb has been restored with marble inlays and red sandstone. At least one public park has been cleared of drug addicts. Enrolment in the refurbished primary school has increased from 130 children to 660. Hundreds of young people in the basti have acquired basic skills in computers and the English language — some of them now lead heritage walks for tourists. Garbage is collected from one-third of the houses. Restoration work on the additional buildings in the Humayun’s Tomb complex continues alongside.

Like a CEO who spends too much time poring over PowerPoint presentations, Mr Nanda talks mostly in bullet points. “No.1, a conservation project must have all the required human and financial resources it needs, otherwise there is more damage than benefit. No.2, conservation and development must be parts of the same project.”

Referring to the gloriously beautiful Atgah Khan’s Tomb, a monument unfortunately encircled by the basti’s multi-storeyed shanties, Mr Nanda says, “If you want to preserve that building, you first have to take care of the people living there in unsanitary conditions.”

That’s the tough part. Mr Nanda began with easier tasks. After setting up the AKTC office in India, he did nothing more complicated than working on the garden in Humayun’s Tomb. “It looked like a ruinous municipal park,” he says. “There were rows of Ashoka trees instead of the plantation that the Mughals favoured.”

For conservationists like Mr Nanda, the focus is not only to undo 20th century’s “mindless alterations” to sites or monuments that disfigured their character, but also to aggressively restore these to the designs and intentions of their original architects. So the Ashoka trees in the gardens surrounding Humayun’s Tomb were replaced by orange, lemon and pomegranate trees.

“This was India’s first privately implemented conservation project and also the first scientifically carried out garden restoration,” says Mr Nanda, who then moved base to strife-torn Kabul in Afghanistan to restore the destroyed garden around emperor Babur’s tomb.

“Being the only private organization undertaking conservation at any of India’s protected monuments,” says Mr Nanda, “we need to think through every conservation decision a million times prior to implementation.”

Experience has fine-tuned Mr Nanda’s historical understanding of conservation. This is critical in India, where thousands of monuments have been subjected to such irrevocable damage that it is difficult to imagine them in their original look and setting. “It’s a philosophy in two parts,” he says. “First, you have to understand the monument through a process dependent on the highest level of documentation and archival research. Second, the conservation plan must be implemented with the help of master craftsmen who work with a multi-disciplinary team of architects, engineers, historians and designers.”

This is revolutionary, considering that periodic facelifts of monuments have exclusively been the work of archaeologists.

“Our country has 3,000 years of building history in which the repairs of centuries-old structures were traditionally done by craftsmen,” says Mr Nanda. “The British dismantled the system and put engineers, trained to build modern structures, in charge of the restorations, a policy that remained unchanged after independence. You can see the fallout (of that policy) on Humayun’s Tomb, where we had to remove one million kilograms of concrete that engineers had added over the years, ostensibly to stop water penetration into the monument.”

Mr Nanda’s method of dealing with the seepage copied the techniques of craftsmen from previous eras. He applied lime plaster or chuna, making the dilapidated buildings look uncomfortably new. This literal whitewash horrified quite a few of Delhi’s aesthetically minded citizens who have developed a taste for decaying edifices.

“Some romantic people prefer ruins, but our techniques are guided by the consideration of how to make a monument survive in a state that is as close to its original condition as possible,” says Mr Nanda. “If ruins are allowed to remain ruins, then what you are seeing today will further disintegrate after two generations.”

Mr Nanda did not inherit this passion for old buildings — his mother, who raised him, was a professor of political science. Like most Delhiites, he was happily oblivious to his city’s tombs and domes. While working on an urban history assignment as a first-year architecture student, he was shocked to discover Sultanate-era structures at a stone’s throw from his family home. This life-changing assignment was given to Nanda by his beloved teacher, historian and author Narayani Gupta.

On graduating, Mr Nanda was hired by the Delhi chapter of the Indian National Trust for Art and Cultural Heritage (Intach) to exhaustively document the Capital’s monuments. For three years, the young man rode through the city on his Kawasaki Bajaj, armed with two cameras, a sheaf of maps to mark the locations of buildings, and a photocopy of Zafar Husain’s legendary compilation, List Of Mohammedan And Hindu Monuments: Delhi Province. The result was the two-volume catalogue Delhi: The Built Heritage, which lists over 1,200 monuments, complete with photographs of all the featured buildings.

It was during the legwork for this listing that Mr Nanda encountered the violent mechanic in Lado Sarai. The incident brought the building to the notice of Intach, which eventually rescued it through a conservation project.

For some ruins, it is too late. In 2013, the Archaeological Survey of India (ASI) informed Parliament that it could no longer trace 35 protected monuments in the country — 12 of them were in Delhi. Such a loss is crushing, but despair won’t help. “We have started with a 10-year conservation project at Qutub Shahi’s Tomb in Hyderabad,” says Mr Nanda. That may be Humayun’s Tomb, Part 2.

[This is the 88th portrait of Mission Delhi project]