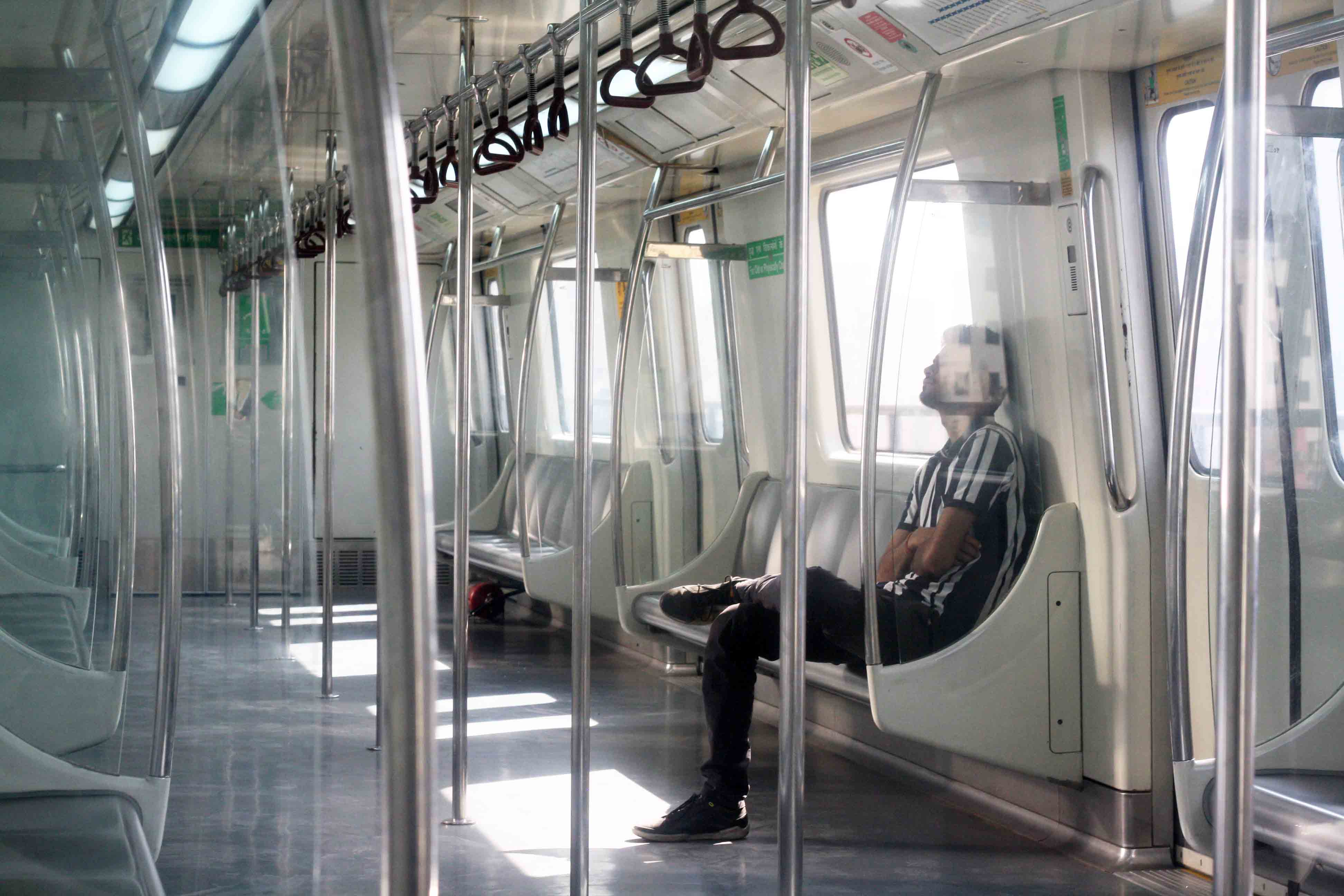 Poems on the Metro.

We know that the Delhi Metro has become a part of our lives. The undocumented development, however, is the Metro’s deep tunnelling into the Capital’s literary bedrock.

“Meanwhile, as the last train from Rajiv Chowk station pulls away, a young man rides the Metro and dreams of murder” — says the blurb of Raj Kamal Jha’s forthcoming novel, She Will Build Him A City.

The well-known author has company. The Delhi Metro has been a muse to writers and poets before him.

Jasbir Chatterjee, 48, is a customer relations manager at a car showroom. She wrote a poem on the Metro way back in 2006. That poem appeared in a UK textbook in 2012.

Nishtha Gautam, 29, is an English teacher. A feminist poem by her had the Metro as a backdrop.

Saumya Kulshreshtha, 24, is a content strategist in a social media marketing firm. Her short story was set in the Metro.

Manika Dhama, 30, is the content head of a craft and textile website. She frequently blogs about her experiences on the Metro.

Vivek Narayanan, 42, who has published two poetry books, is a name in literary circles. His 2005 poem on the Metro reappeared last year in The HarperCollins Book Of English Poetry.

All these people, except for the US-based Mr Narayanan, live in Delhi. And the city’s 12-year-old mass transit system has helped shape their artistic sensibilities.

These air-conditioned trains, which have “changed the way Delhi commutes”, as we so often hear, have effortlessly absorbed people of diverse backgrounds, bringing a comfortable 30-minute ride within everyone’s reach. This makes it easier for the poetically minded to see a metaphor in every coach.

Indeed, each commuter could be a short story. That woman with heavy eye make-up, gripping her handbag tightly, is planning to dump her husband. That ramrod man in a suit and skullcap is mourning his dead son. That girl with purple nail polish will be slapped by her mother tonight. Those sallow-faced members of the wedding band hail from a village in Bihar that gets flooded every monsoon.

The coach windows, too, offer creative possibilities. Jammed underpasses fall behind in quick succession. So do the long grey platforms with their ascending and descending escalators. Private lives can be glimpsed on balconies — a woman combing her hair, a man stretching his bare arms.

The person in Ms Chatterjee’s poem, The Delhi Metro, experiences a life-changing moment after stepping into the train, where she lets her thoughts wander “like naughty, restless children”.

Showing the book in which her poem was published by the Oxford University Press, Ms Chatterjee says: “One summer afternoon, I was heading to a job interview in a car showroom. It was a time when my artist husband was struggling to find work, my mother-in-law was seriously ill, and my daughter was small. The way to the station was full of cows and chaos. Then I entered the coach. It was so quiet and cold. Opposite me was seated a happy-looking couple. I suddenly experienced a kind of bliss that (William) Wordsworth describes in Daffodils. That was the instant of my poem’s birth.”

Seated in her basement cabin in a Honda car showroom in west Delhi’s Mayapuri, Ms Chatterjee says: “I write a poem each time my feelings are affected, and it often happens during my commute, in which I always strike up conversations with passengers. Recently, I met an NRI (non-resident Indian) in the women’s coach who bared her entire life to me between Dwarka Sector 21 and Uttam Nagar East — how her husband divorced her, how she holds no grudge towards him and how her teenage son wants to leave home. I tried to make a poem out of her but it was tough. I wrote a short story instead and called it Fellow Traveller.”

Ms Kulshreshtha, who shuttles 2 hours daily between Vikaspuri and Green Park, titled her story The Luck That I Am. It resulted from a chance incident at the Rajiv Chowk Metro station. Talking about it at the McDonald’s outlet across the road from the Janpath Metro station, she says: “I was standing on the platform. Soon a man arrived and hugged a girl standing beside me. They both remained in that posture for a long time. It was beautiful and sad because I too wanted to be hugged. That sensation prompted me to write The Luck, which I published on my blog.”

Ms Kulshreshtha, founder of the Poets’ Collective group that meets every month at some scenic Delhi landmark, says: “The Metro gives me lots of ideas for poems and stories. In the morning, you always see a group of commuters huddling around one newspaper, as if it’s a neighbourhood chai shop. I have also seen people weeping discreetly with their faces turned towards the windows.”

Nishtha Gautam’s poem Tu Haan Kar, Ya Na Kar, which appeared in Dilli, an anthology published by Poets Printery, takes its name from a Hindi film song that celebrates a stalker. “It’s about a woman who steps into the train while continuing to text a friend,” says Ms Gautam, an assistant professor in south Delhi’s Deshbandhu College, sitting in a Khan Market coffee shop. “They are exchanging SMSes on women’s empowerment. Soon the woman feels a man pressing himself against her. She gives him two tight slaps and continues with her texting.”

As a poet in the Metro, Ms Gautam says she finds the coach windows particularly inspiring. “Sometimes, they show the squalor and colours of the city outside and, sometimes, they reflect the faces of your co-passengers, and, sometimes, you see both scenes interposed upon one another.”

Ms Dhama, a poet, writer and blogger who travels between the Noida City Centre and Saket, doesn’t care for the windows during her hour-long journey. “Since the Metro is my reading deliverance, I hardly end up looking outside,” she says, sparing a minute or two at Rajiv Chowk. “But the conversations you inadvertently overhear are like getting a slice of Delhi life. These have included the soft murmurings of love over the mobile phone, tirades against parents who live elsewhere and seem to ‘not understand’, all levels of office politics on display, the quintessential mother-in-law ruminations, and even the uncontrollable tears from a break-up on the go.”

Last month, Ms Dhama wrote On These Tracks on her cellphone — “Doomed Love’ was scribbled on the cover/Of Aeneas and Dido in time torn asunder/Just then a voice joined my morning ride/Cowering behind a cellphone smile”.

The poem was inspired by a fellow commuter who was “possibly ending a relationship on the phone and was crying next to me, while I was inadvertently invading, wanting to shake her out of it.”

Mr Narayanan’s poem, In The Early Days Of The Delhi Metro, emerged from notes and lines taken down in 2004 while riding the Metro from Central Secretariat to Civil Lines. “The poem began with the sound of the Metro, which felt like the sound of an approaching and unknowable future. But there was also something ominous, as if some aspects of the past might be taken away from us forever. Even as I was excited about the Metro and the new possibilities in Delhi, I was already feeling nostalgic for the early days,” he says on email.

It’s still early days for the Delhi Metro. We are far from the subculture of the London Underground that has inspired poets like Ezra Pound and Seamus Heaney, and spawned books series like Poems On The Underground.

Next time you board the train, look around like a writer or poet and ask yourself—as Robin Williams’ character in Dead Poets Society asks his students — “what will your verse be?”

2. (Jasbir Chatterjee at her office)