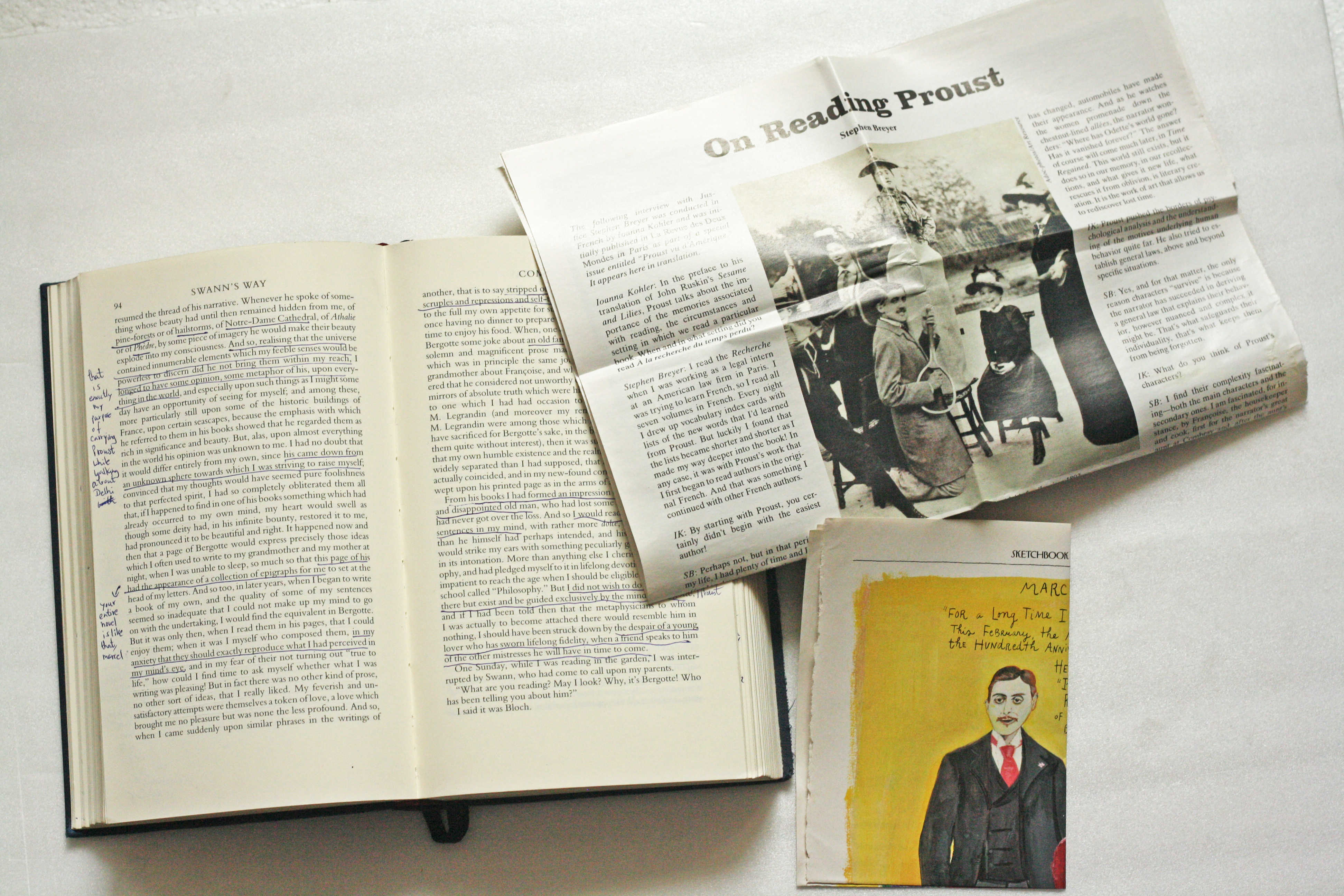 Letters from Nagpur and Birmingham.

The Delhi Walla is soon to restart the weekly meetings of The Delhi Proustians.

The other day I received a mail from Ankit Kumar, a reader in Nagpur, Maharashtra. I’m sharing it with his permission.

“I do not know whether it is appropriate to discuss Proust over e-mail but I had to write this.

It was my destiny.

I finished your book in three sittings. I had to follow you to Proust.

But the problem is that even if I really want to read Proust, every second page gets boring and sometimes the sentences get as complex as a C++ program.

I have got an e-book copy of C. K. Scott Moncrieff’s translation (of In Search of Lost Time) for reading in the office – I don’t want to get caught by my boss. And I have also a paperback (of the first volume) translated by Lydia Davis to read at home and in places other than my office. So for me it is two pages by Moncrieff and then two pages by Davis. Which one is better?

I would be glad if there is way to really absorb Proust.”

I forwarded Mr Kumar’s mail to the English speaking world’s most renowned academic on everything Proust. William C. Carter, a Proust biographer, is the Distinguished Professor Emeritus of French at the University of Alabama at Birmingham.

This is Mr Carter’s response to Mr Kumar:

“Lydia Davis’s translation is by far the best in the new Penguin edition, but the general consensus among writers and readers of Proust is that no one tops Scott Moncrieff’s translation, which, according to a poll done among Anglophone writers and journalists back in the 1980s, is the best translation of any foreign work into English. I too held this opinion long before I knew that I would be asked one day to revise the translation and annotate it for a new edition published by Yale University Press. Swann’s Way appeared on the centennial date, November 14, 2013. Our edition of In the Shadow of Young Girls in Flower will be out in October of this year.

On reading Proust what may seem boring will later be shown to be a part of his tightly woven tapestry. You need to trust the author. There are really no digressions in Proust although one may at first think so. Part of the miracle (a word used by Shelby Foote and also be Wallace Fowlie) of this vast novel is how it all fits together so neatly. The whole of it can be reconstructed from any part. All the themes are interconnected. This will become apparent when you reach the conclusion and especially evident on a re-reading of the work.

I always tell people that Proust can indeed be complex but never difficult. His sentences are rich with meaning. Notice how he explores a particular thought in it many interesting ramifications and brings it all together or reaches a conclusion with the last phrase or word. It often helps when confronted with such a sentence to read it out loud. Proust’s music comes across more clearly that way and is apparent even in English, especially in Scott Moncrieff’s translation.

You have no doubt noticed that in the opening pages of the novel, the major themes are set forth. The book is a quest as the title indicates and the Narrator will start down what he assumes at first to be many wrong paths in his search to find the meaning of his life and the ability to transform it into a book. Since this is a first-person narration, the reader is intimately involved in the quest. You will notice how deftly Proust engages us by often inviting us to compare our experiences and thoughts with those of the Narrator. He does this frequently by shifting from first person singular to first person plural. The first example of this, I believe, is in the following passage from early in the novel:

“Certainly the Swann who was a familiar figure in all the clubs of those days differed greatly from the Swann created in my great-aunt’s mind when, of an evening, in our little garden at Combray, after the two shy peals had sounded from the little bell, she would vitalize, by injecting into it everything she had ever heard about the Swann family, the vague and unrecognizable shape that began to appear, with my grandmother in its wake, against a background of shadows, and could at last be identified by the sound of its voice. But then, even in the most insignificant details of our daily life, none of us can be said to constitute a material whole, which is identical for everyone, and need only be consulted like a page in an account book or the record of a will; our social personality is a creation of the minds of others. Even the simple act that we describe as “seeing someone we know” is, to some extent, an intellectual process. We pack the physical outline of the creature we see with all the ideas we have already formed about him, and in the complete picture of him that we compose in our minds those ideas have certainly the principal place. In the end they come to fill out so completely the curve of his cheeks, to follow so exactly the line of his nose, they blend so harmoniously in the sound of his voice that these seem to be no more than a transparent envelope, so that each time we see the face or hear the voice it is our own ideas of him which we recognize and to which we listen. And so, no doubt, from the Swann they had built up for their own purposes my family had left out, in their ignorance, a whole crowd of the details of his daily social life, details by means of which other people, when they met him, saw all the Graces enthroned in his face and stopping at the line of his arched nose as at a natural frontier; but they contrived also to put into a face from which its distinction had been evicted, a face vacant and roomy as an uninhabited house, to plant in the depths of its unvalued eyes a lingering sense, uncertain but not unpleasing, half-memory and half-oblivion, of idle hours spent together after our weekly dinners, around the card table or in the garden, during our neighborly country life.”

Note how Proust moves discreetly from the story to the sentence that summarizes his main thought and includes the reader: our social personality is a creation of the minds of others. Here he states something we can all agree with, elaborates it, and then he moves again effortlessly back into his main line of narration: “And so, no doubt. . . ” etc. The novel is full of so many of these observations that apply to the human experience that a number of books have been published containing Proust’s maxims.

Perhaps Mr Kumar would like to join our dedicated readers of Proust in our online course at Proust-Ink.com and/or visit our website at the same address.”

Perhaps Mr Kumar may also like an invitation to attend the forthcoming meeting of The Delhi Proustians.

Marcel, I love you