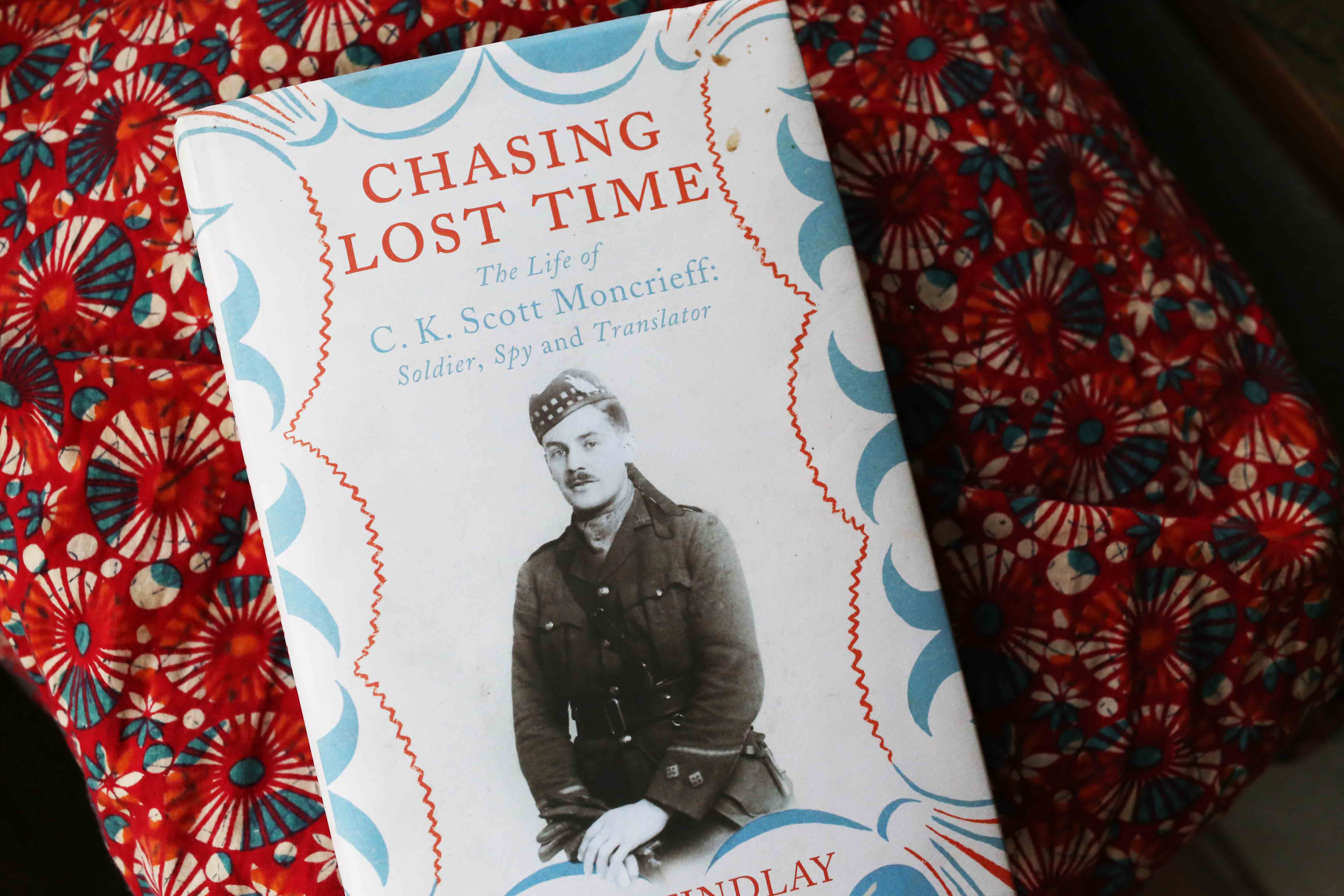 A biography by Jean Findlay.

There happens to be a very, very long novel. It has seven volumes, 200 characters and 1.2 million words. A Scotsman, who was an extremely sensitive homosexual and extremely fond of giving blow jobs, translated this book’s first six volumes from its original French into English and named it after a line by Shakespeare.

An early reader of Mr Moncrieff’s translation was writer Virginia Woolf, who, wrote: “Proust so titillates my own desire for expression that I can hardly set out the sentence. Oh if I could write like that! I cry.”

Reading Proust’s great modernist novel is said to be so daunting that few of us are able to reach its end (The Delhi Walla did!). Mr Moncrieff devoted eight years to Proust on a diet of coffee and wine. Penguin UK Modern Classics did re-translate the entire novel many decades later in 2002, but each volume was by a different translator–the first was by award-winning novelist Lydia Davis. Mr Moncrieff would have translated the final volume too but death came sooner, as with Proust who died before his final three volumes could be published.

Novelist F. Scott Fitzgerald called “Moncrieff’s Proust… a masterpiece in itself,” but Lydia Davis accused Mr Moncrieff of “gratuitous additions and embellishments,” although admitting that “Moncrieff’s translation has been virtually the only one read hitherto by readers of Proust in English.”

Today, most English-language readers of Proust still travel the long road via Moncrieff’s way (though they are likely to read a revised version worked upon by Terence Kilmartin and D.J. Enright respectively).

Scandalously, there had been no book on Mr Moncrieff until now.

The devotees of Proust trying to penetrate further into the soul of their Marcel are prepared to ransack every document related to his life and work. But Ms Finlay’s book might (initially) disappoint. Her Moncrieff had loves; he composed poems; he was injured in the war; he spied in Fascist Italy; and, oh yes, he translated Proust. But the man who remains the only one to translate virtually the entire Recherche couldn’t just be on an assignment. Mr Moncrieff ‘s niece is silent on what happened when her uncle first read Proust. Where he was. What he felt. How Proust haunted him.

However, a determined reader would discover the biography’s unifying theme. She may not have planned it so but Ms Finlay offers us a portrait of a Proustian as a reader. Every chapter touches upon the books Mr Moncrieff happened to be reading at different stages of his life, as if those feverish readings were preparing him for his life’s defining vocation.

As a child, Mr Moncrieff grew up listening to family readings of Robert Louis Stevenson, John Milton, William Wordsworth, George Herbert and John Ruskin. Christmas was celebrated with recitals of Milton’s ‘Ode on the Morning of Christ’s Nativity’. The young Moncrieff loved H.W. Longfellow, read Walk Whitman with feeling, and learned P.B. Shelly’s ‘Skylark’ by heart. At seven, he declared “no real woman would think of doing the things that Rosamond and Ceila did” in As You Like It. At school, where he read Homer, Plato, Horace, Tacitus and John Keats, his housemaster said, “Scott Moncrieff is the kind of boy who is quite happy in bed if he has plenty of literature, only it must be literature.”

Soon he was writing “private poetry, praising the beauty of living boys” and graduated to publishing less private poetry in magazines. He frequented London where he attended the “literary homosexual coterie” of Robert Ross, a friend of the disgraced Oscar Wilde.

Mr Moncrieff was sent to France during WW1 where he wrote poetry, read Jane Austen, and had a shrapnel hit his right thigh.

During a spell in his home country at a point in the war, Mr Moncrieff fell for Dante–he read a canto daily before breakfast. He also turned to journalism and started writing “long, rambling” reviews. At Robert Graves’ wedding in London he laid eyes on the “intensely shy” Wilfred Owen who became a friend. Mr Moncrieff felt a physical longing for Owen which the war poet did not reciprocate.

A year after the war ended Mr Moncrieff asked a publishing company in London if it would be interested in the translation of a novel being published in Paris. “If you entertain this idea formally,” he wrote, “I shall be glad to shew you a specimen of my translation in due course.”

Mr Moncrieff was refused. The translation of the first volume was eventually published in 1922 by Chatto & Windus. Proust died the same year. Mr Moncrieff died eight years later of stomach cancer. He was 40.

Proust was buried in Paris, Mr Moncrieff in Rome.