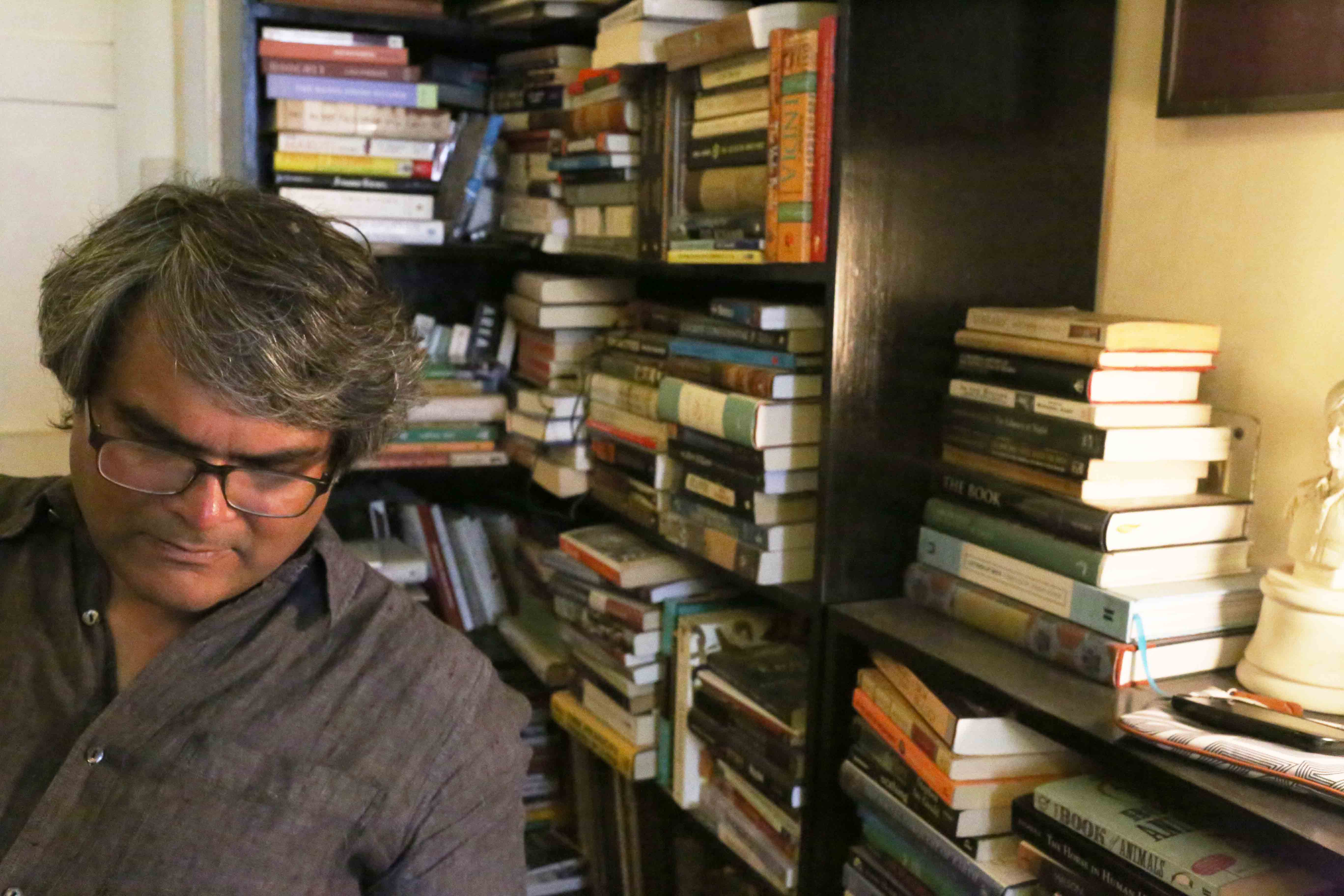 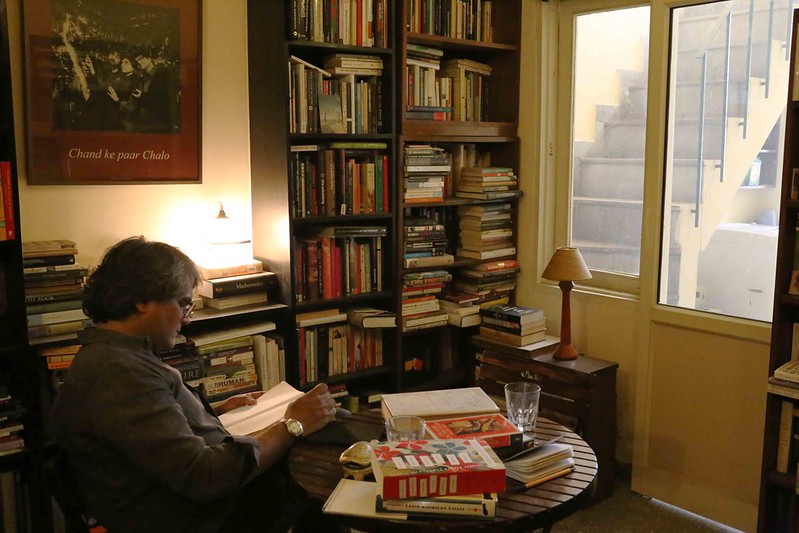 Life to death, sex to body (and body parts – the eyes, hands, the left hand, breasts, the penis, the vagina, bones and blood and guts). There are also shelves on memory, amnesia, sleep, insomnia, dreams, silence and voice. A corner rack is filled with happiness and sadness, laughter and boredom. There are three racks of books on mathematics, with an edition of the Elements of Euclid always within easy reach and a book that contains only a million random numbers. The maths books are next to two shelves on evolution and biology, punctuated by volumes about fossil fish, imaginary animals, whales, ants, octopuses, giant squids, a history of horses and a volume called Birds in Sanskrit Poetry.

The Delhi Walla is in the private library of artist and writer Shuddhabrata Sengupta, a founder-member of the Raqs Media Collective. His second-floor apartment in Central Delhi’s Old Rajinder Nagar has thousands of books packed into two tiny rooms (I’m not counting the 400 books on his kindle).

“Is there something you don’t like to read, sir!.”

“ I don’t think so…” says Mr Sengupta after a pause, “I read telephone directories–it is fun to read strange names–and the Gideon’s Bible in alien hotel rooms, if I don’t have anything else to read.”

The small round table in the drawing room flaunts the gloriously titled hardbound An Anthology of Sanskrit Court Poetry, but the section on death hijacks attention. Its four shelves include books with titles like Japanese Death Poems, The Islamic Understanding of Death and Resurrection, and The Oxford Book of the Dead. “Someday I plan to write a long essay on death,” says Mr Sengupta. “Death is the most universal of experiences, and human beings are probably the only animals that are aware that they cannot escape it. It is one of the things that make us human. I think people learnt to read and to write to trick death.”

Mr Sengupta should also write a treatise on a booklover’s life as a globetrotting forager. He travels abroad frequently, for work, and of course he carries few clothes and many bags, and he always returns with “accidentally discovered” second-hand books that you would rarely spot in Delhi.

Envy his friends. They must constantly be flicking his books.

“No, my friends never do that,” says Mr Sengupta. “Though some of them do take my books away on long loans.”

Mr Sengupta himself is not averse to the idea of stealing books. “I will not call it flicking,” he says half-jokingly (read menacingly). “I only liberate books from the condition of being unread, especially from hotels and restaurants.”

This liberated land keeps a watch on all kinds of faiths, fundamentalisms and doubts. One bookshelf is stacked with religions. “Judaism and Christianity are on the top shelf, then Islam,” says Mr Sengupta. “Buddhism, below. Under it, commentaries on Buddhism and then different kinds of books on different kinds of Hinduism.” The Bhagavad Gita has taken over an entire rack. “I have all the authoritative translations of the Gita in English and Bengali. Someday I will have to write critique of the Gita, I guess.”

The neighboring shelf shines divinely with the handsome The Norton Anthology of World Religions—the two hardbound volumes lie inside a glossy slipcase. This bookshelf has devoted two of its racks to the Mahabharata. This is unusual. Many of us consider it unlucky to keep this ancient epic at home; after all, it is all about a family feud morphing into an annihilating war. “While we are atheists, conversations in my (parental) home often veered around the Mahabharata,” says Mr Sengupta. “It has our source stories. There is a fragment of Mahabharata in all of us.”

Mr Sengupta has ten translations of the Mahabharata, yet his home seems at peace.

“The shelf between the Mahabharata and poetry is on the subject of time,” he points out. Indeed, almost every book on this rack has the word ‘time’ in its title. Sitting down on the only sofa in his cramped drawing room, Mr. Sengupta says, “There is of course always some leakage from one shelf to another… so, poetry has infected time….”

(His collection leaks out his worldview, too. Books on the Paris Commune, the selected works of Lenin, and five biographies of Karl Marx, the letters of Rosa Luxemburg, together with volumes of Das Kapital stand close to Thomas Piketty’s Capital in the Twenty-First Century.)

While some of us abuse a book to flee from society, Mr Sengupta makes it a means to socialize. Recently he whiled away an afternoon with three friends around this very table getting “drunk” on reading poetry. He says his friend Aarti Sethi, an anthropologist currently doing field work in rural Maharashtra, spends hours reading in this room, whenever she is in Delhi. Recently he surprised her with a book that had seemed impossible to find-Say to the Sun, “Don’t Rise,” and to the Moon, “Don’t Set”: Two Oral Narratives from the Countryside of Maharashtra; he had picked it up from the Strand Book Store in New York.

Mr Sengupta’s current reading list lies exposed on the window-side shelf. Here are the books he is reading these days. Three versions of the Arabian Nights, Moby Dick (which he says he is always reading), Joyce, Proustuddin, Borges, and his fellow Argentinian, Cesar Aira. The racks are mostly filled with novels; in fact, there are too many books crammed here that they keep falling down on the floor without anybody even as much as touching the racks.

“This is too much now,” says Mr Sengupta, as a Latin American poetry anthology falls down with a thud. “I think I should stop getting more books.”

Coming from a man who keeps 50 different kinds of dictionaries in his bedroom (including dictionaries of Santhali, Sankrit, Persian, Esperanto and Indo-European root words), this innocent utterance could only provoke us to laugh out loud. 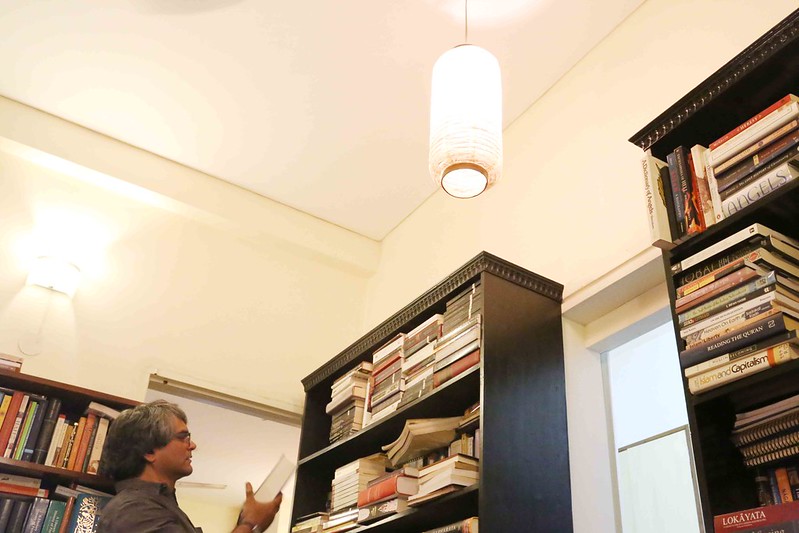 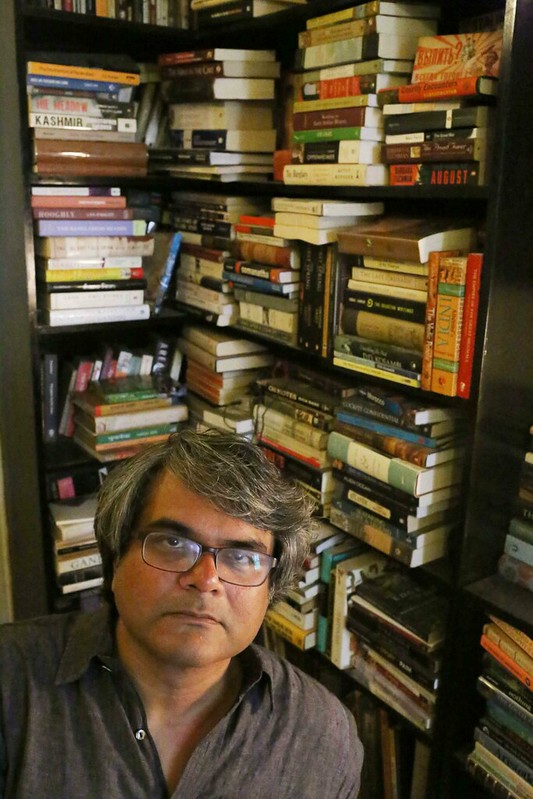 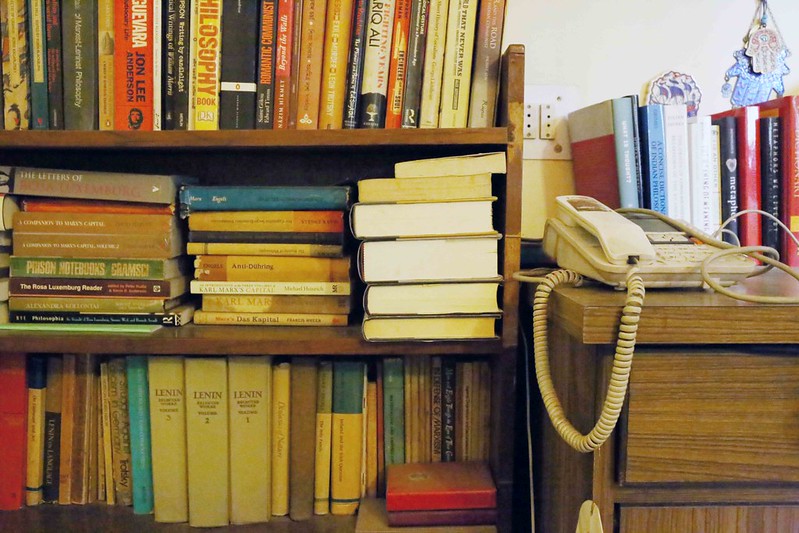 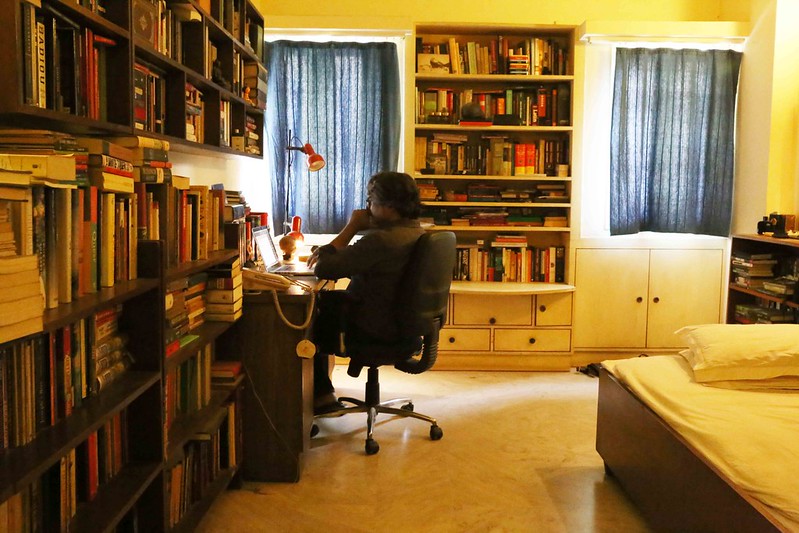 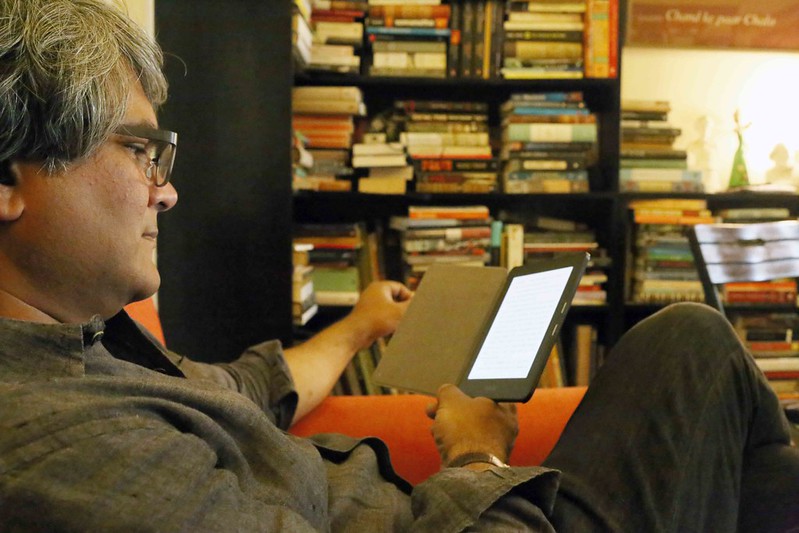 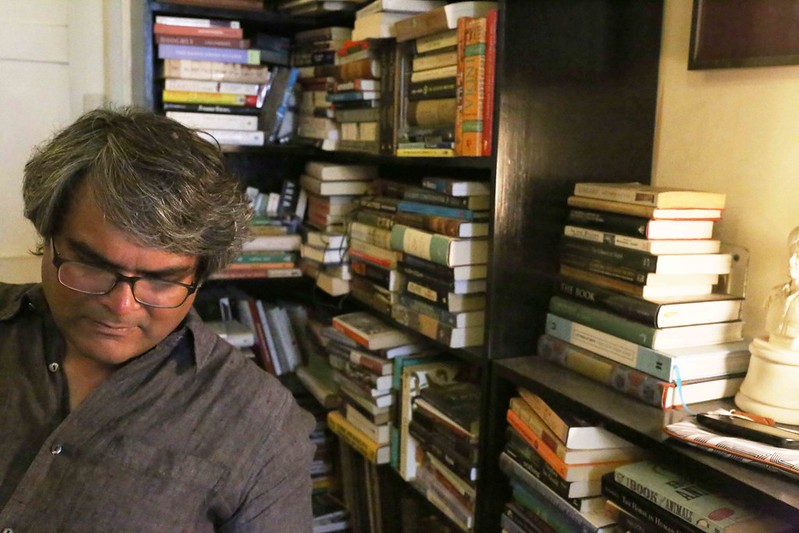 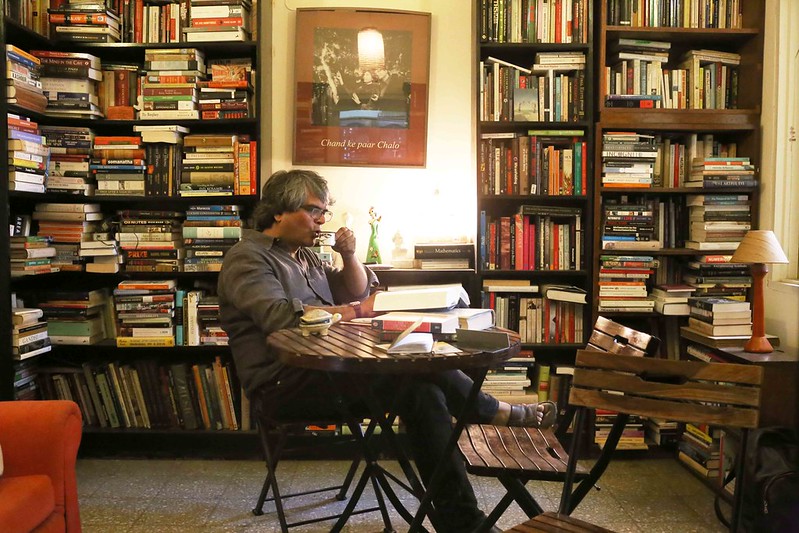