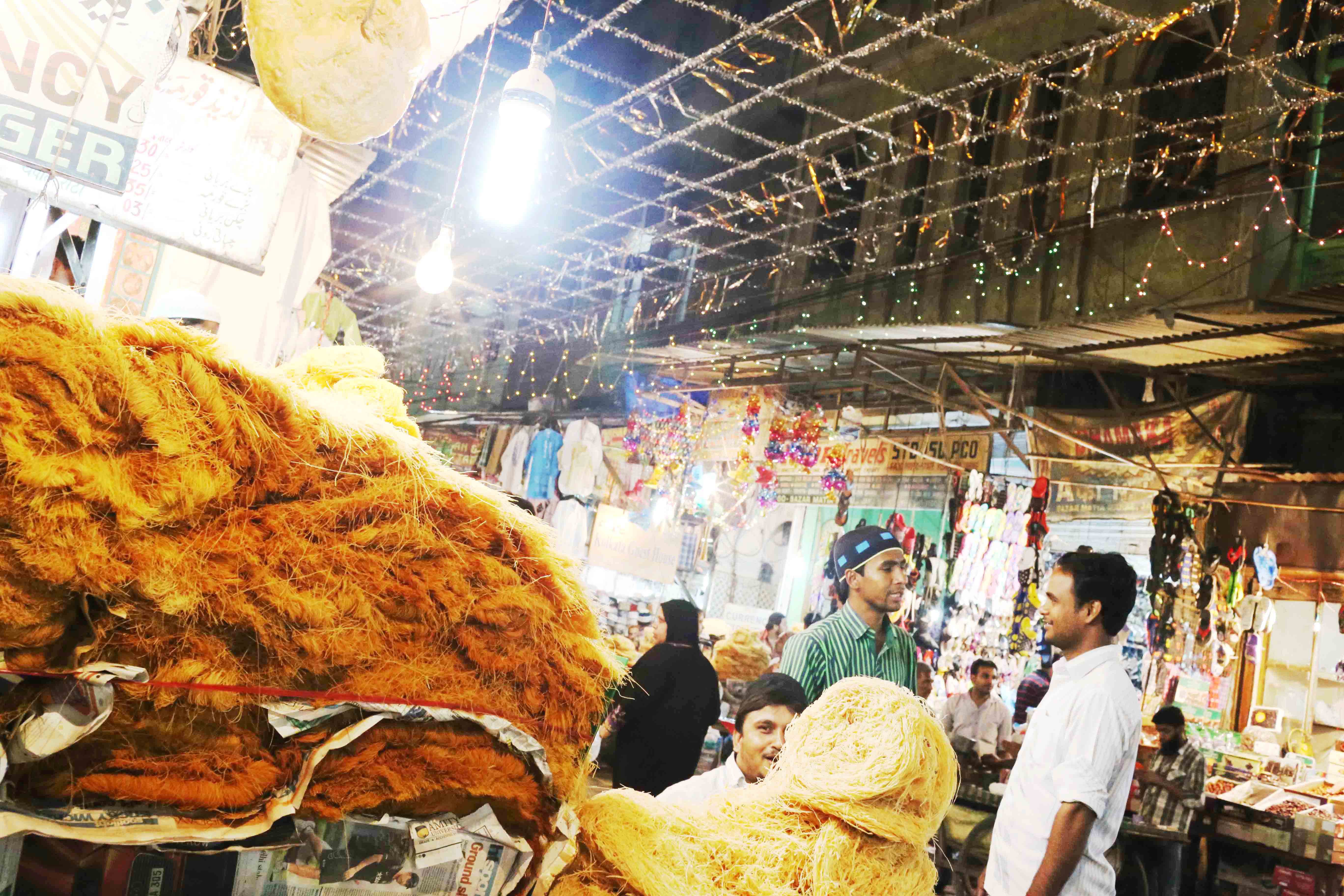 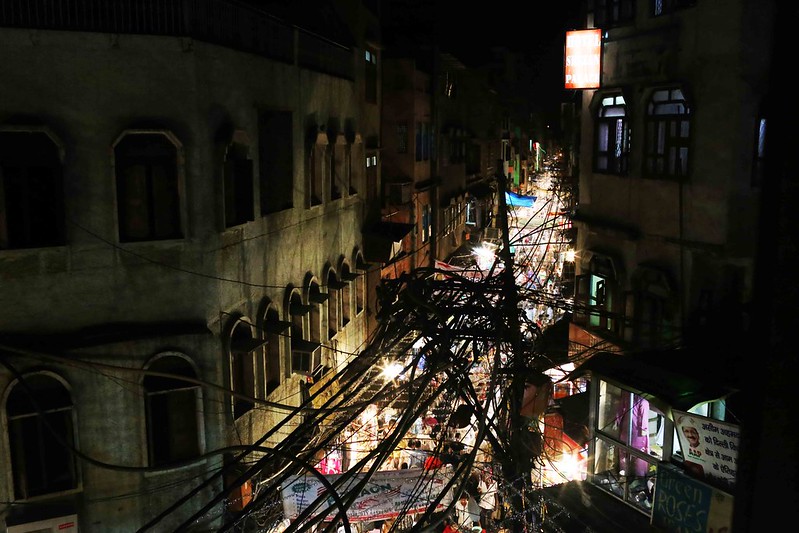 Picnicking year after year outside Old Delhi’s Jama Masjid during Ramzan nights is like re-reading a favourite Ghalib couplet. Everything is familiar, and yet each thing is a thrill, as if you are experiencing it for the first time.

To be sure, the mosque-facing Matia Mahal Bazaar hums with nocturnal bustle from January to December. But in the Muslim month of fasting, the bazaar’s eateries, including the famous Karim’s, remain open until 4am. All the 30 nights are as maddeningly hectic as the Friday nights in Hauz Khas Village. The streets are decorated with silver buntings and orange lamps. The pavements are taken over by makeshift stalls selling sevai, roasted vermicelli. There are shops selling dates from Iraq and Saudi Arabia, and special coconut parathas that are made only during Ramzan. The lanes and by-lanes swarm with people, and the air is filled with the smell of grilled meats. For a truly memorable experience, come only after midnight.

It was singer Begum Akhtar’s favourite hotel. Spend some time in the first floor lobby, which offers a panoramic view of the Jama Masjid. The hotel’s head caretaker is a published Urdu poet. If you are lucky, he may recite a verse or two.

Situated a kebab’s throw from the Jama Masjid, Kallan Sweets is mindful of its heritage. It was started in 1939 by Kallan Mian (originally of Peshawar), and its walls are plastered with newspaper stories celebrating its fabled paneer ki jalebi and khoya samosa. But The Delhi Walla asks you to just feast on their pheeki jalebi. It is thick and laden with desi ghee. Like many other Ramzan desserts, the proper way to consume it is to submerge it in a bowl of milk. The jalebi disintegrates into little pieces, and the concoction looks like your typical morning bowl of cornflakes and milk. To judge the jalebi by its true measure, however, ask for it to be served in cold milk. A layer of ghee will form at the top; the thicker the layer, the better the quality.

There was a time years ago when people would sit on the stairs of the Jama Masjid and exchange gupshup (gossip) over various kinds of kebabs. The vendors stationed their stalls at the base of the stairs. But now the gates of the mosque stay shut at night, and the kebab sellers line up outside, at Urdu Bazaar. Positioned one after another in a single long row, almost all these kebab makers live in the nearby street called Gali Kababian, the lane of kebab makers. Go to Nadeem Chicken Corner for fish fry, Lalu Kababee for buff tikka, Tajuddin’s stall for seekh kebab and mint chutney and Ahmad Chicken Corner for roast murga.

This pavement booth on the main lane of Matia Mahal Bazaar has been selling dates for 30 years, but there is a much larger variety on display during Ramzan. Do try harmuni. Imported from Iraq, it is so soft and sweet that it is nicknamed gulab jamun. You may also be tempted by ajwa, dates from Medina in Saudi Arabia, which cost Rs.2,400 for a kg.

This undersized establishment is difficult to spot even on less crowded days. The search gets tougher in Ramzan when the counter of Kamaal Sweet House is stacked from top to bottom with flaky khajla, those giant round ghee-rich breads that are eaten soaked in milk. Kamaal’s khajlas are preferred by the fussy locals because it has its own karkhana (bakery) in a nearby alley. Most of the other shops get their supply from one of the “factories” in east Delhi’s Seelampur, where they are mass produced.

Mohammed Danish never lets his sizzling-hot shahi tukda grow cold. The deep-fried chunks of white bread, drowned in sugar syrup and topped with malai (cream), are kept in a giant platter. The dish constantly simmers on a fire under Danish’s careful watch. Sweet, sticky and delicious, this pudding-like dish goes best with the young vendor’s home-made mango ice cream. The combination is addictive.

This tea house is famous for its sooji halwa, aloo chhole subzi, poori and milky chai. But all that is forgotten during Ramzan for the sake of sevai and pheni. These two are the season’s staple and occupy pride of place on the counter. While sevai is roasted vermicelli, pheni is its deep-fried version. The shop serves them with piping hot milk.

This is the only season when the bakery’s everyday rusks and biscuits take a back seat. The front desk is instead piled with coconut parathas. Sweet and milky, they look like huge buns. They are best had by dunking them in tea.

End the adventure in this unusually quiet corner. Imran’s tea stall stands outside the eastern gate of the Jama Masjid. The open-air shack looks down onto Meena Bazaar and clings to the Sufi shrine of Hazrat Sarmad Shaheed. Served in small glasses, Imran’s tea is milky and overly sweet, typical of this part of Delhi. But the point is not the beverage. Sitting on a wooden bench, surrounded by young men from the area, it is a very different scene here. No decorative lights, no great crowds, except for the homeless people sleeping on the ground. Meena Bazaar lies in darkness. The ramparts of the Red Fort look like pale silhouettes. This surreal hang-out serves as a contrast to the night’s noisy adventures. 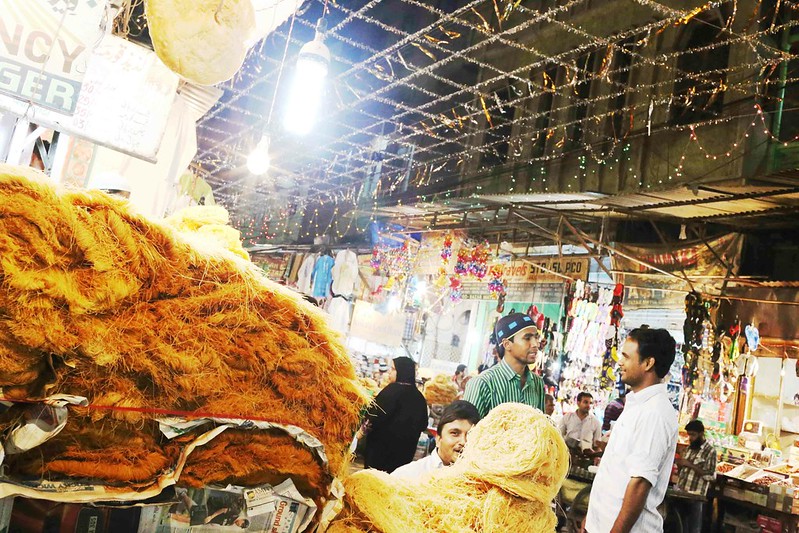 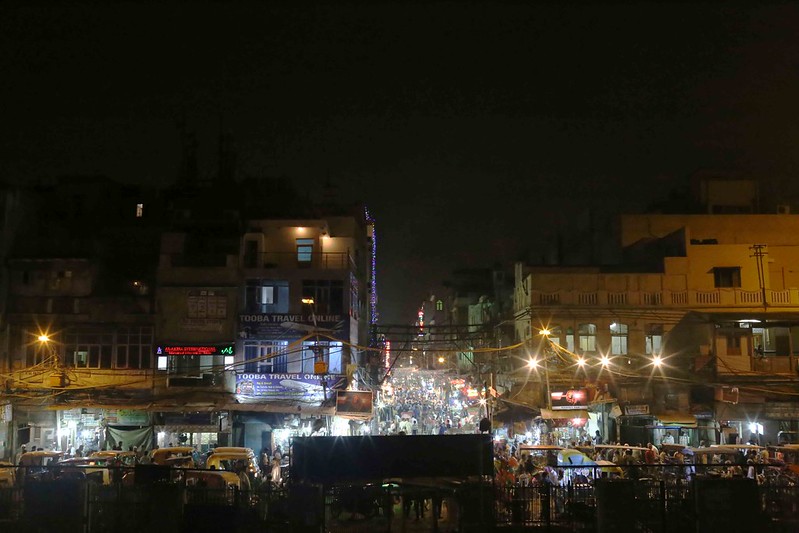 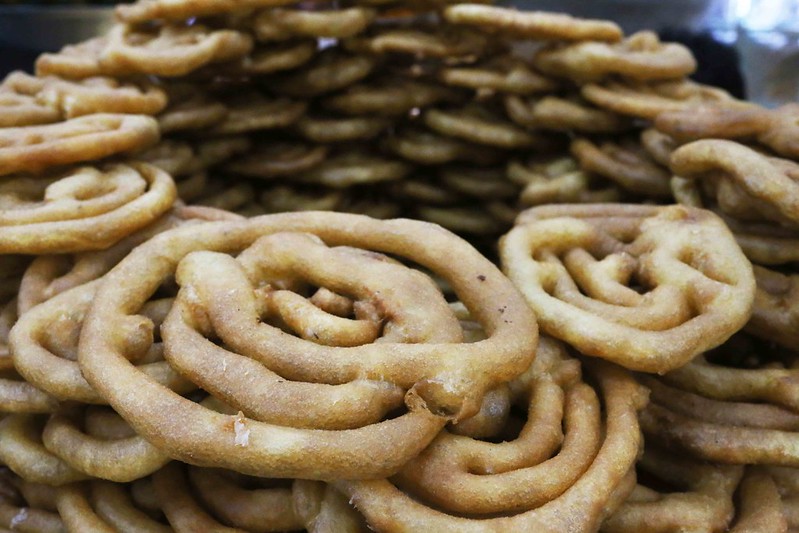 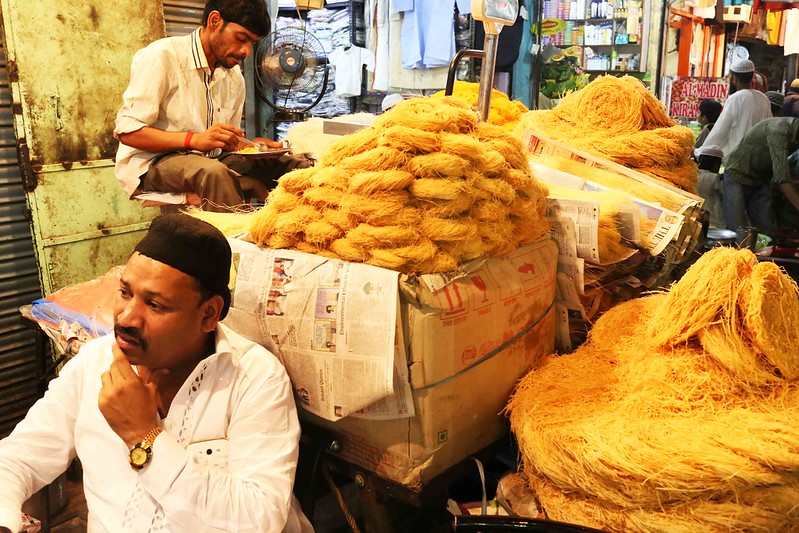 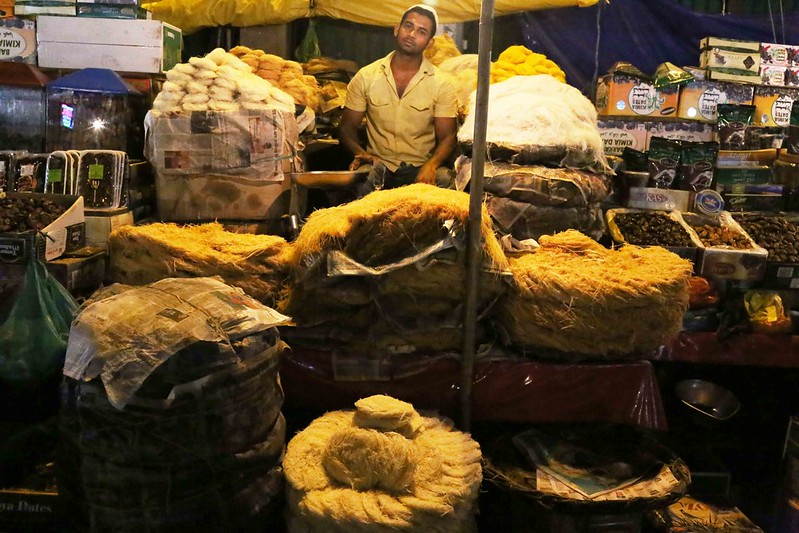 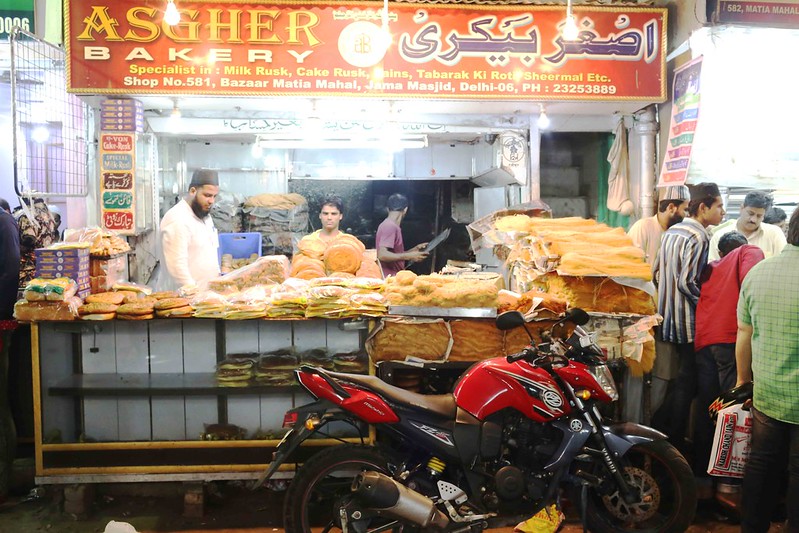 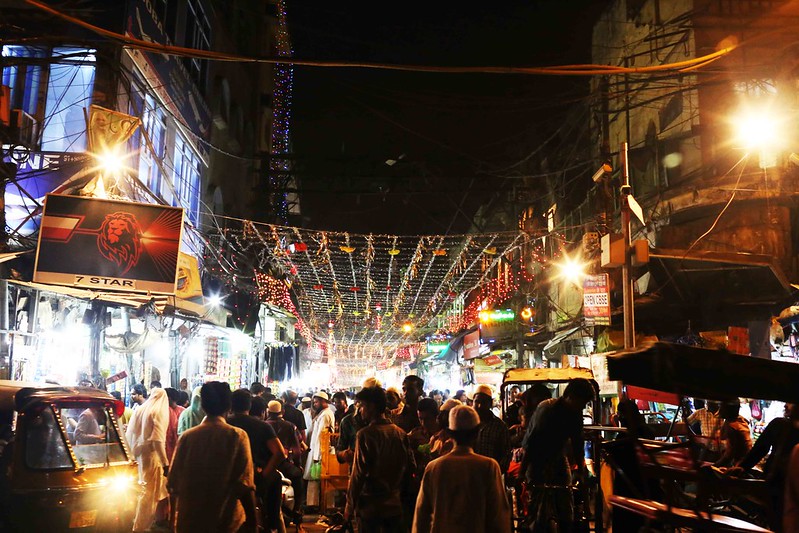 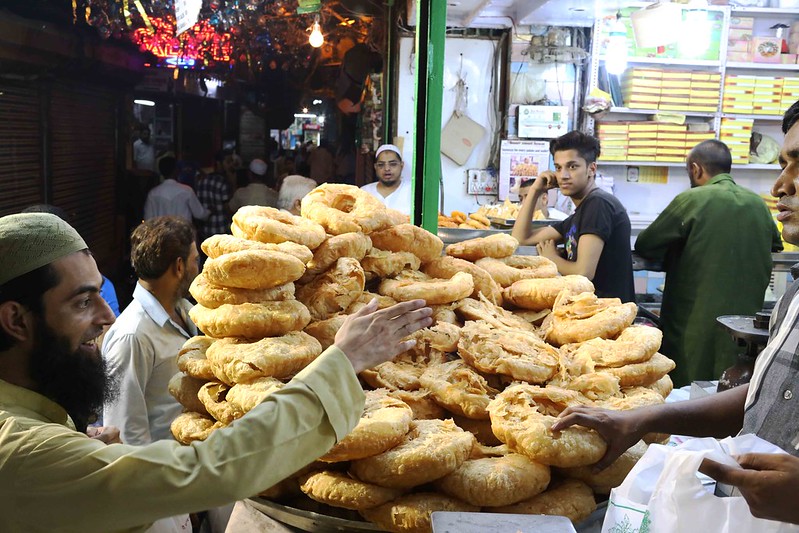 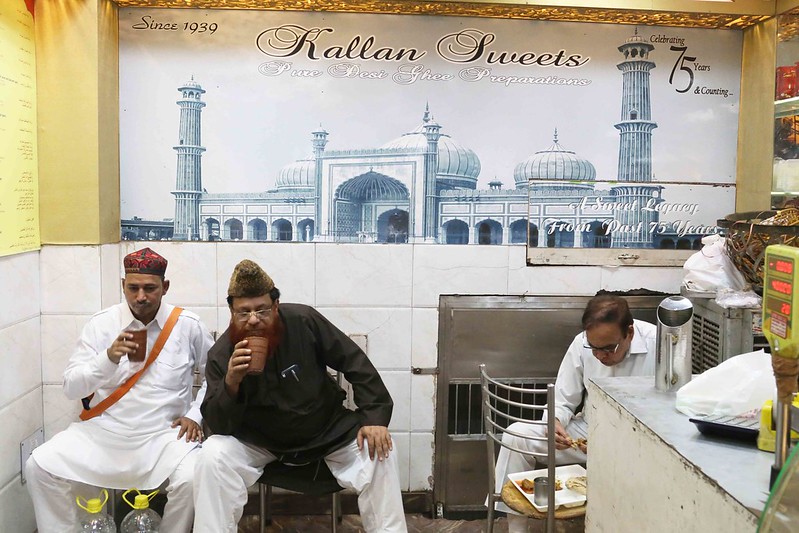 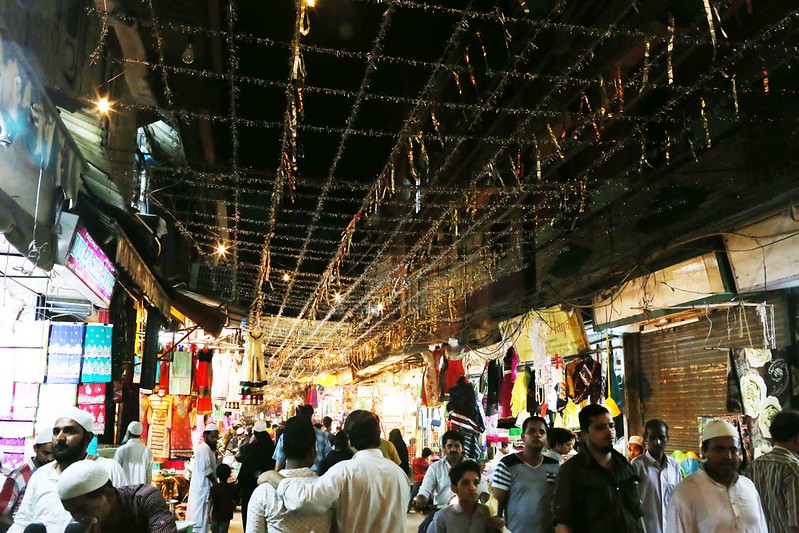 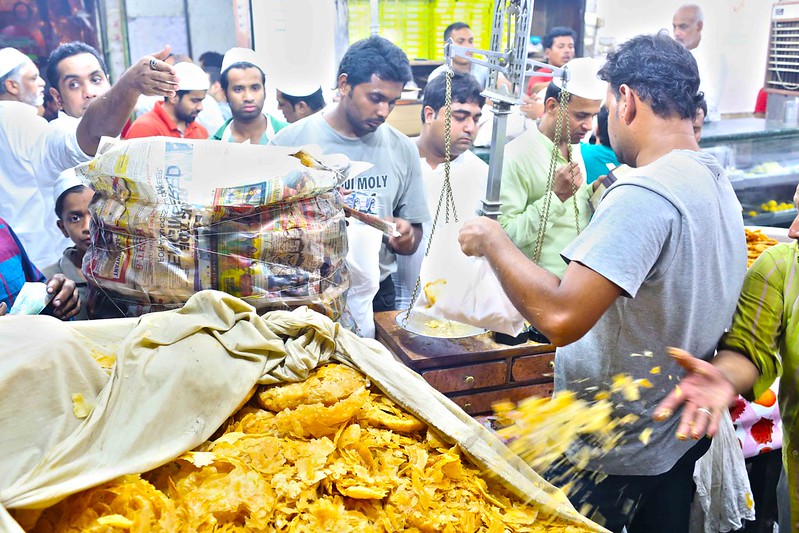 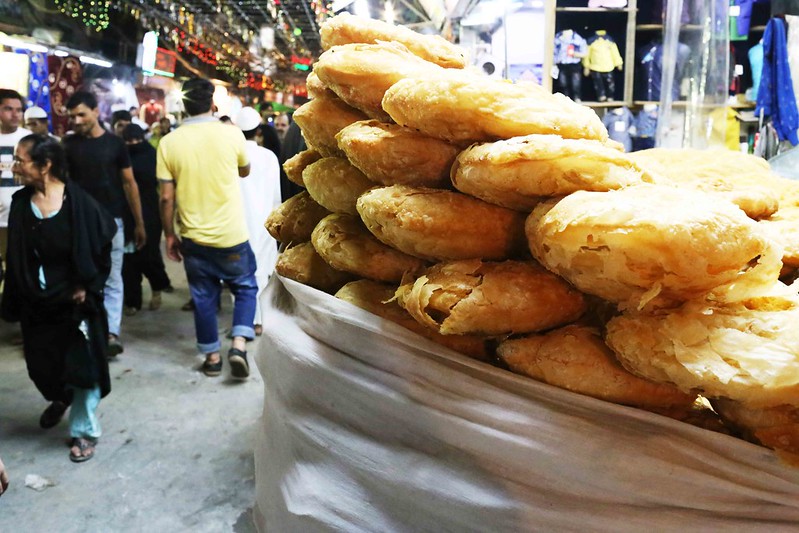 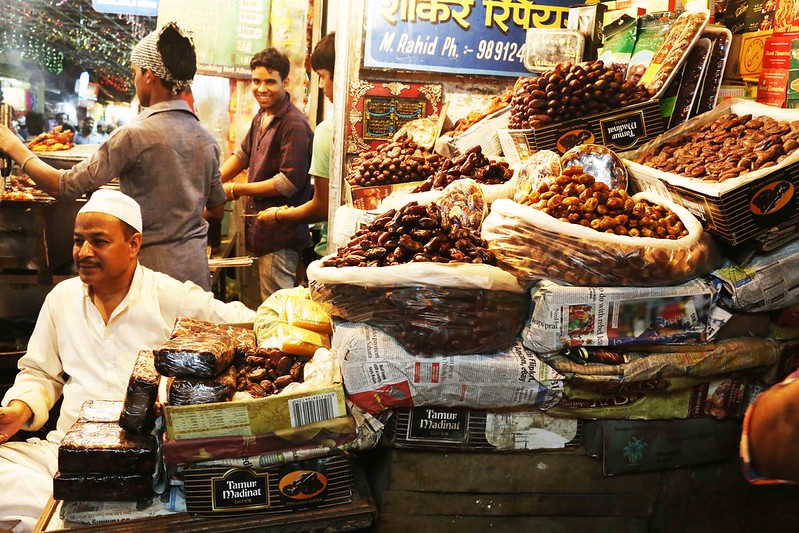 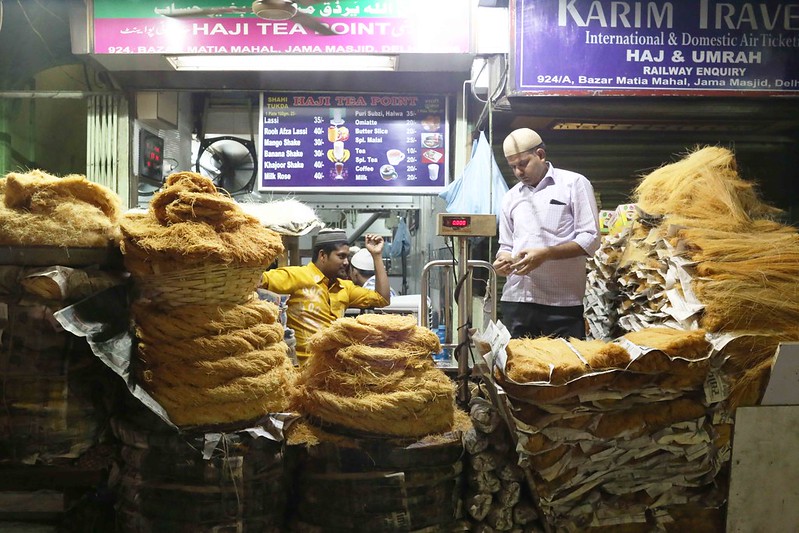 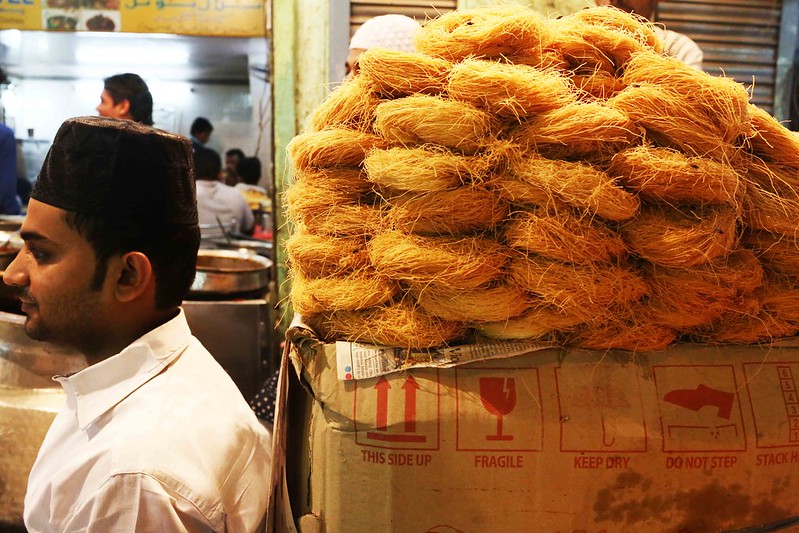 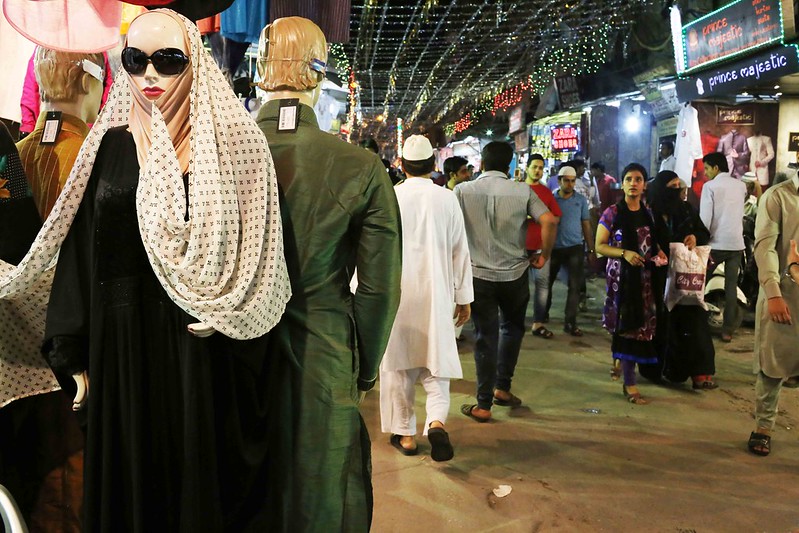 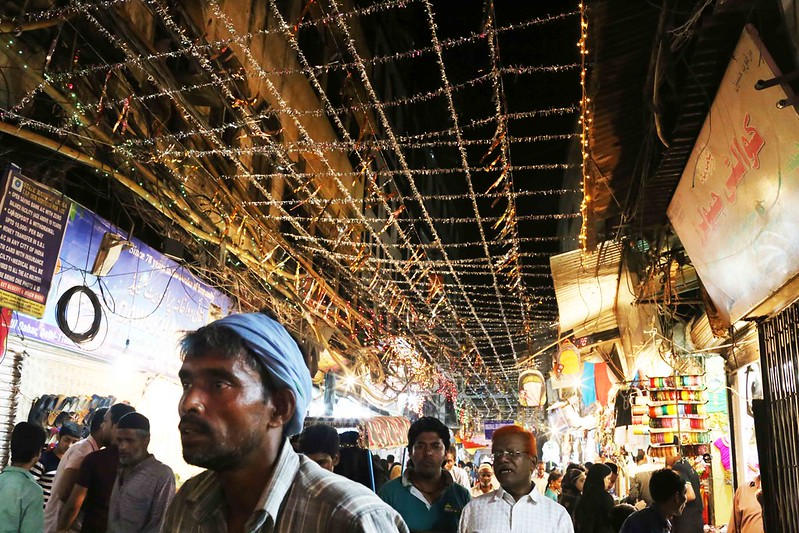 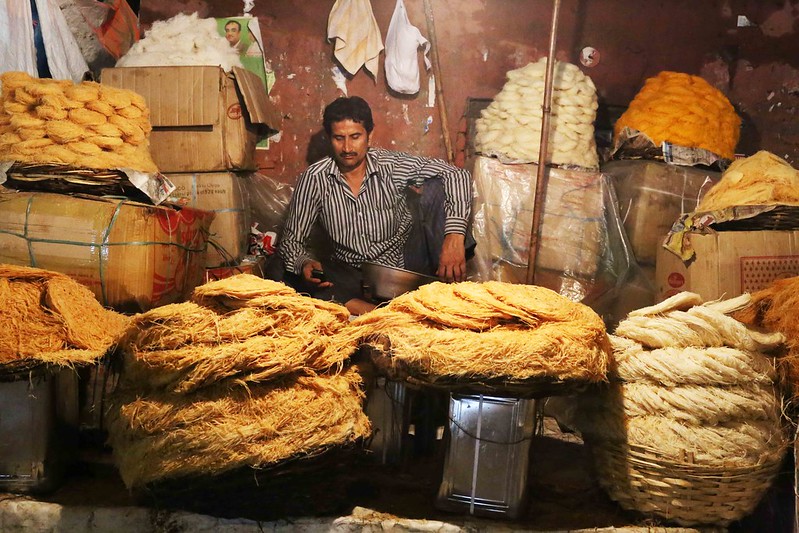 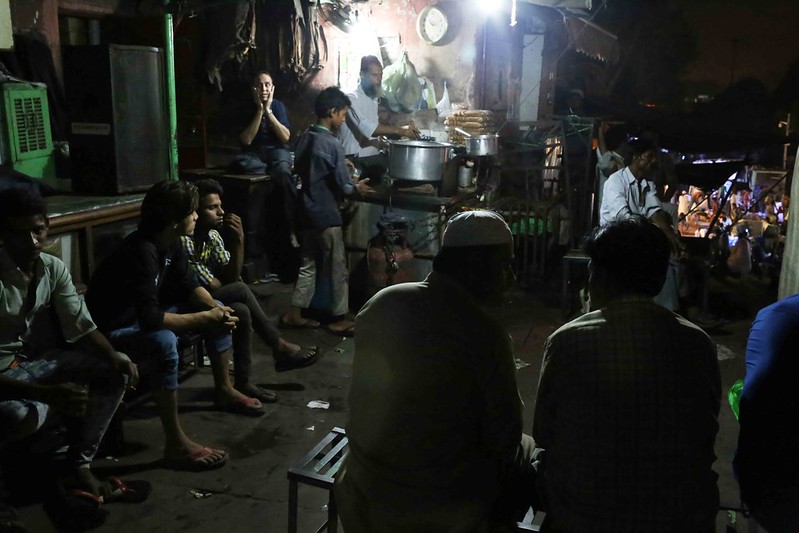 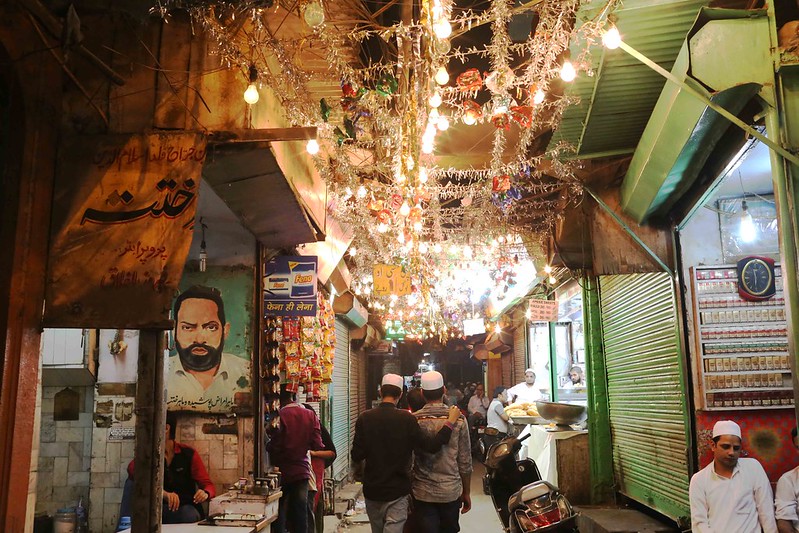