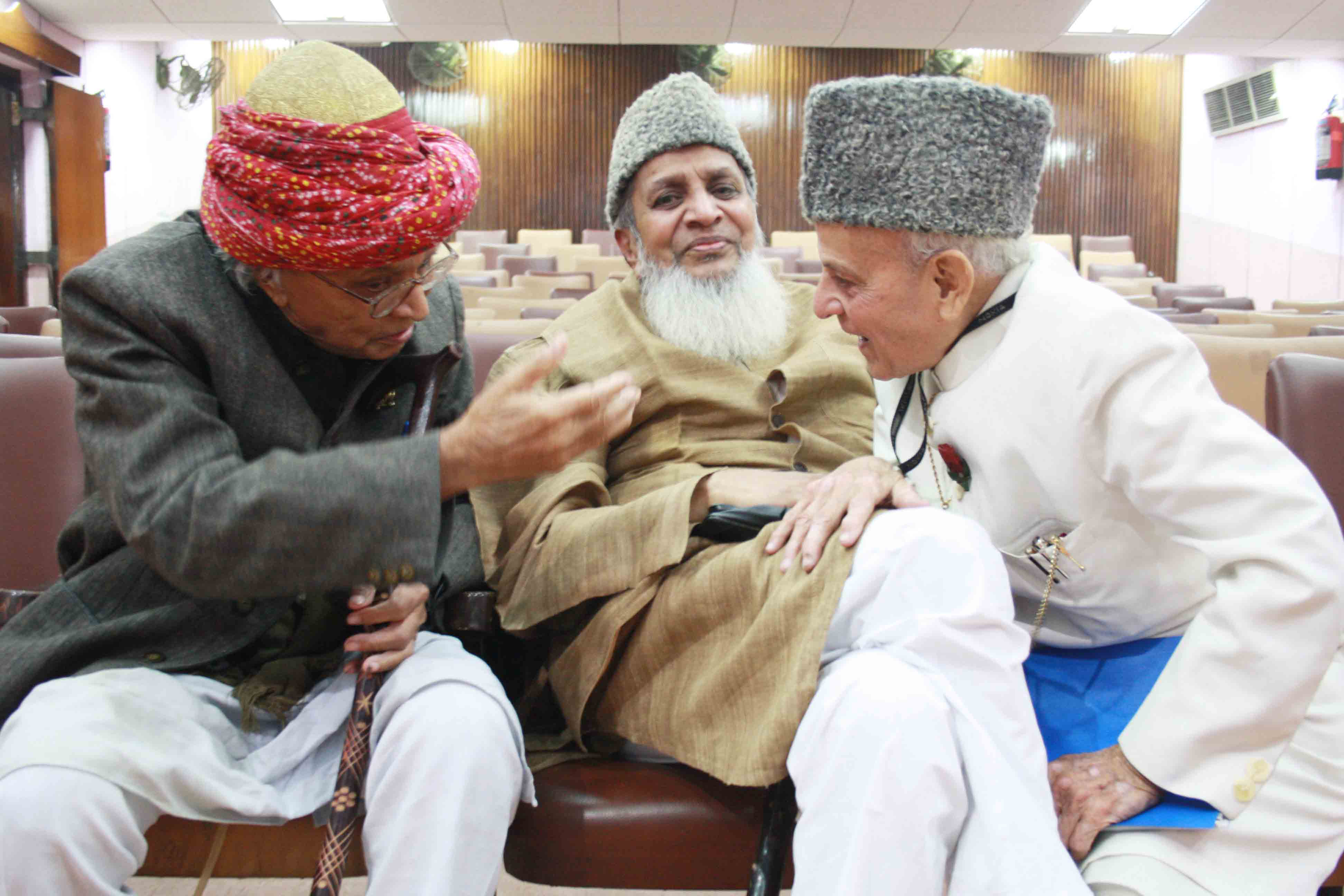 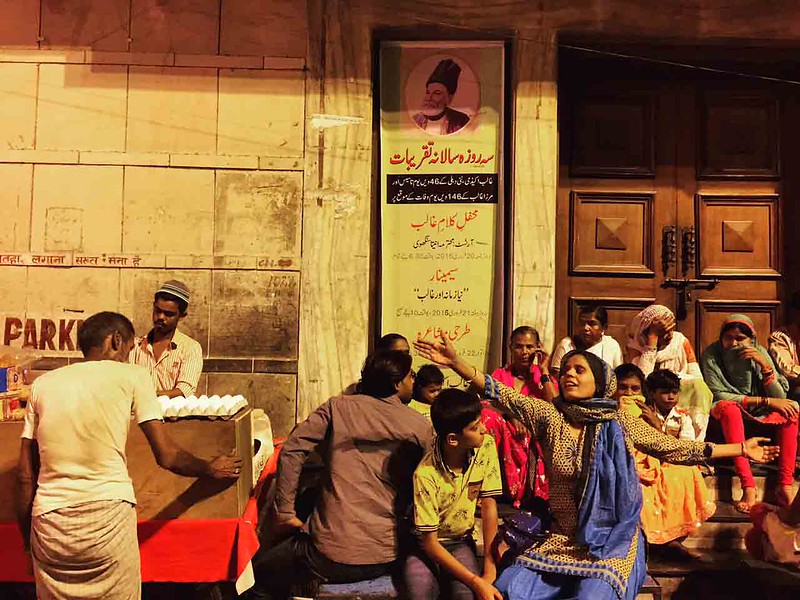 The world of Urdu poetry.

Three men sat in the front row. The rest of the house was deserted; the rows of chairs looked like empty bookshelves. The three seemed unperturbed. Verse has no deadlines and never lacks an audience, for there are always at least a few whose souls need poetry at the end of a prosaic day.

Within the next hour, the auditorium at the Ghalib Academy began to get livelier. Poets arrived, joining the three who were there first. Members of the audience too trickled in, among them a kebab vendor and an elderly, homeless man. The stage was now ready for a mushaira.

It was being held in the memory of a Delhi-based poet, Musheer Jhinjhanvi, who died 25 years ago. The poets invited were to recite verses composed especially for the occasion.

Fewer than a dozen women were present, and there was just one woman on stage. Feminist poet Iffat Zarrin is Mr Jhinjhanvi’s daughter. She came from her home in Old Delhi in an autorickshaw.

While there will always be people fearing the imminent demise of either Urdu or poetry or both, the flame continues to flicker in this corner of central Delhi’s Hazrat Nizamuddin Basti. Founded by philanthropist Hakeem Abdul Hameed in 1969, the Ghalib Academy has a library and museum devoted to the 19th century Urdu poet Mirza Ghalib, whose marble tomb stands next to the building. Informal meetings of writers, poets and critics are held in a basement hall every second Saturday. But it is the 200-seater auditorium that constitutes the soul of the academy. This is where the lyrical language flows.

A group of five poets who get together every night at the Suleman Tea Stall in Old Delhi’s Chitli Qabar Chowk told The Delhi Walla that the Ghalib Academy hosts the maximum number of Urdu poetry recitations in Delhi. Poetry meets are also held at some other places, such as the Urdu Academy in Kashmere Gate, the Ghalib Institute near Bal Bhavan and the MA Ansari Auditorium in Jamia Millia Islamia.

“The season has just begun,” says poetry critic Aqil Ahmad, the long-time secretary at the Ghalib Academy, one December afternoon. His institute, he says, hosts an impressive 30 mushairas annually. Most of them are held from November to April. It’s not only the touch of winter that makes couplets more palatable than usual; the main reason for the increased bustle is very banal. Literary organizations that depend on doles from the Union ministry of human resource development need to spend their money before the close of accounts in March.

The mushaira in Mr Jhinjhanvi’s memory, for instance, was being organized by the Saeem Educational Trust. A day earlier, a poetry session had been held during the book launch of Naseem Afsar, an Urdu poet from Jharkhand. It was organized by the Ansari Islamic Culture Centre.

For poetry lovers, these are unnecessary details. What matters is the thrill of making your way through the chaotic lanes of Nizamuddin Basti and entering the quietude of the Ghalib Academy’s auditorium, where a minor galaxy of poets is seated cross-legged on stage. In front of them burns a giant wax candle, a tradition from a bygone era when there was no electricity and no mike and a candle was placed in front of the poet whose turn it was to speak next.

A regular at these evenings can always count on finding more than one familiar favourite. The audience is likely to see at least some of the notable poets who keep the flag of contemporary Urdu poetry flying in the Capital.

Waqar Manvi of Old Delhi’s Gali Sooiwallan is an ustad shayar, or a master poet. Almost every budding poet who wants to be taken seriously goes to him to fine-tune his or her talent. Zafar Moradabadi, who lives in the same neighbourhood as Manvi, is the founder of the influential Mehfil-e-Gangojamun, a literary society that holds poetry recitals in Urdu, Hindi and Punjabi. The elderly Naseem Abbasi, who lives in Nizamuddin Basti, writes in the classical style and recites his poems in the tarannum, or singing, tradition. Ahmad Ali Barqi Azmi, who recently came out with a new book, is a Persian scholar. It is said that if you spend just 2 minutes with him, he will shower you with elegant verses about you. Renowned for his melancholic lines, Shahbaz Nadeem Ziaee of Old Delhi’s Ballimaran will not be seen this season; he is hospitalized with a serious kidney problem.

Then there is the suave Gulzar Dehlavi. In his 90s, the regal-looking Urdu poet from Noida, near Delhi, has cut down on his appearances, but when he is in the auditorium, it is difficult to concentrate on anybody else. The grand old man is always dressed like Jawaharlal Nehru, complete with white sherwani and red rose. His flawless Urdu diction is a delight to listen to even if you can’t follow the language.

The best account of the old-style mushairas is perhaps found in Mirza Farhatullah Baig’s novel Dilli Ki Akhri Shama; its English translation is titled The Last Musha’irah Of Delhi. The book has the fictional recreation of a poetry gathering that was the norm in the twilight years of the Mughals. Even after the dynasty disappeared, the soirées remained a part of the Delhi way of life.

Author Rakhshanda Jalil, who hosts monthly chat sessions with Urdu poets and writers at the Oxford Bookstore in Connaught Place, says mushairas in Mughal-era Delhi were held in homes, large compounds, even the Town Hall in Chandni Chowk, or Red Fort. They would start after the evening prayers and would go on till the early hours.

Unfortunately, they have remained a male domain. Women poets can only be seen occasionally at the Ghalib Academy’s poetry gatherings. “It’s not always kabil-e-izzat (dignified) for a woman to be on stage,” says Ms Zarrin. “Quite often, men in the audience look at you with a gandi nazar (leers), and sometimes you sense that from poets sitting beside you too.” Ms Zarrin also regrets a propensity among male poets to spread rumours about women poets getting their verses secretly written by others.

Even so, female poets such as Ana Dehlavi and Saba Aziz take part in at least two mushairas held at the Ghalib Academy during the season.

These evenings could also do with more knowledgeable audience members, people who understand the tradition and have a feel for the language. Present-day audiences often commit the grievous sin of clapping! This indicates ridicule, not applause, at an Urdu poetry gathering.

The couple of elderly poets I talked to waxed lyrical about the crowds that used to come until two decades ago. “There was a time, barkhurdar (gentleman), when the audience would utter ‘wah wah’ or ‘bahut khoob’ at the right places,” says poet Iqbal Firdausi, who lives in Old Delhi’s Baradari and routinely attends mushairas at the Ghalib Academy. “But now they embarrass you by applauding at the wrong parts. People no longer understand Urdu well.”

Photographer Noor ul Huda Nizami, the official photographer of the Ghalib Academy’s programmes since 1988, makes the same point about a decline in numbers and quality. He mourns that the standard of poets too has fallen drastically in the past few decades. The view is shared by others.

“Why blame the mushaira?” asks Ms Jalil. “We deserve the poets we get. Isn’t poetry supposed to hold up a mirror to society?”

Though the spell has weakened, the verses still have their power. And the most important date on the Urdu poetry calendar is Mirza Ghalib’s birth anniversary, on 27 December. It is a landmark day. Flowers will be offered at Ghalib’s marble grave. Candles will be lit at Ghalib’s last house in Old Delhi. The Ghalib Academy annually host a special recital of the poet’s verses on this day, which always end with a dinner of chicken korma and chicken biryani, a Ghalib Academy tradition.

The action intensifies in the weeks ahead. Delhi’s biggest annual mushaira will be held on 17 January at the Red Fort grounds. At the Ghalib Academy, the season will continue.

O my poet, that line again 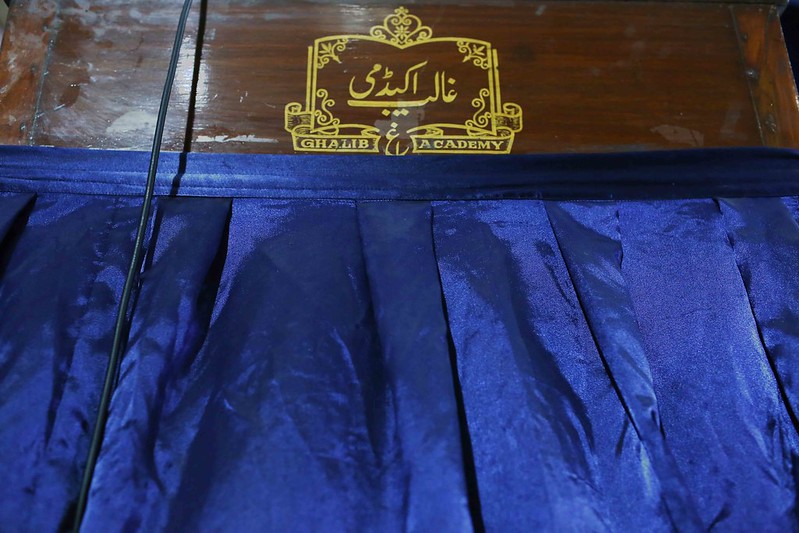 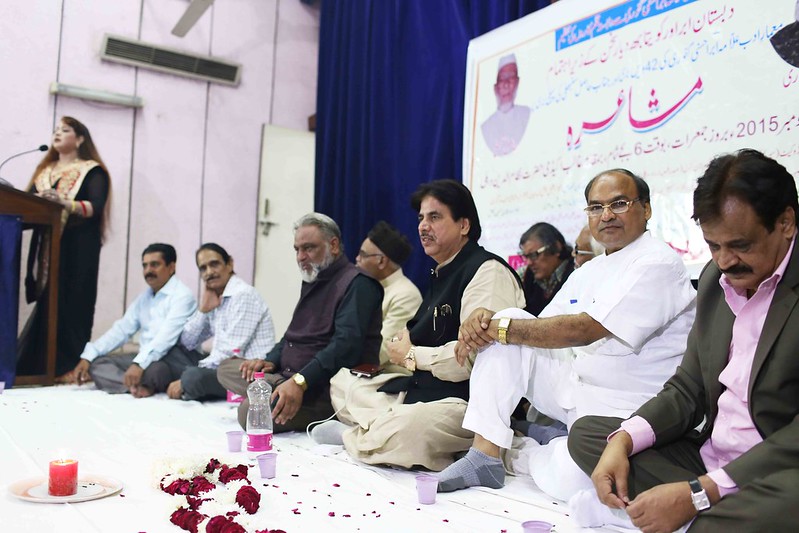 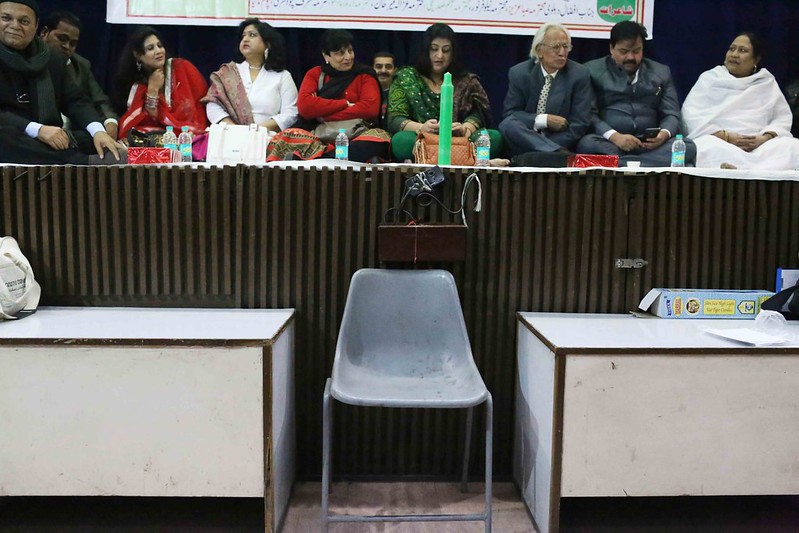 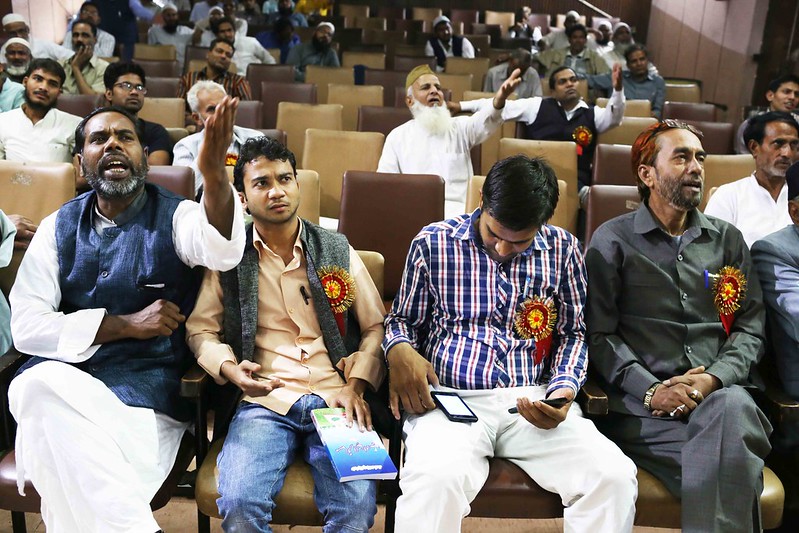 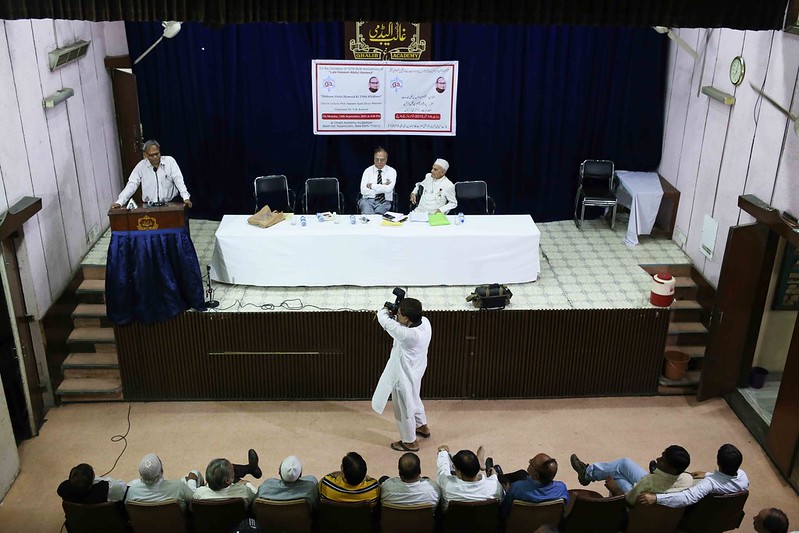 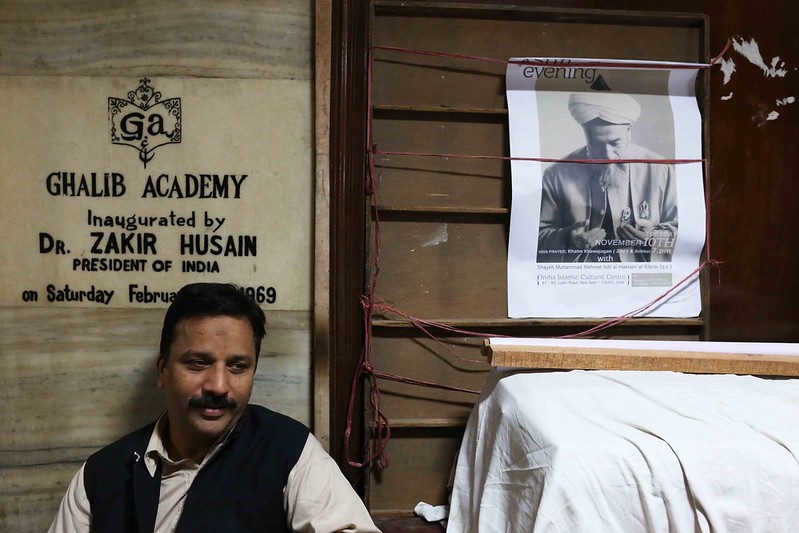 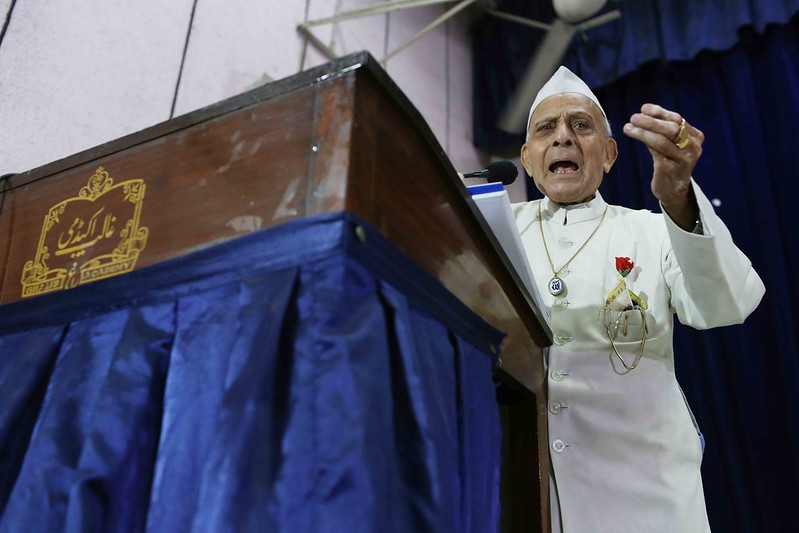 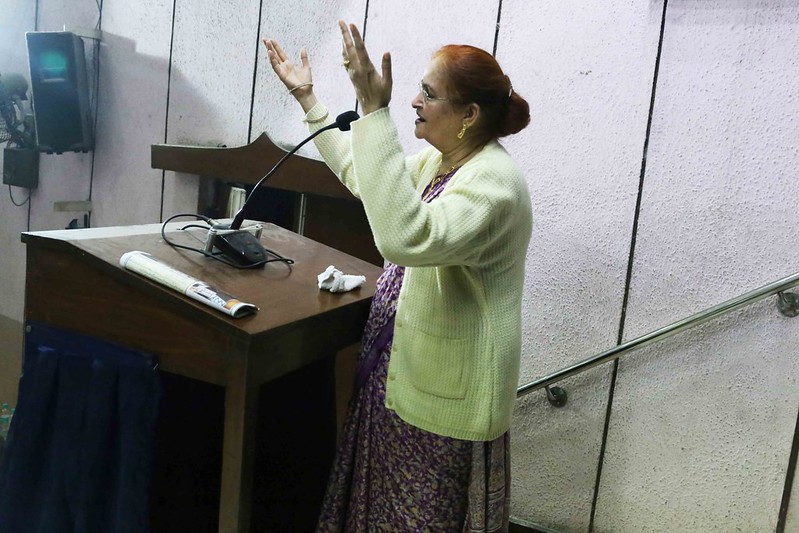 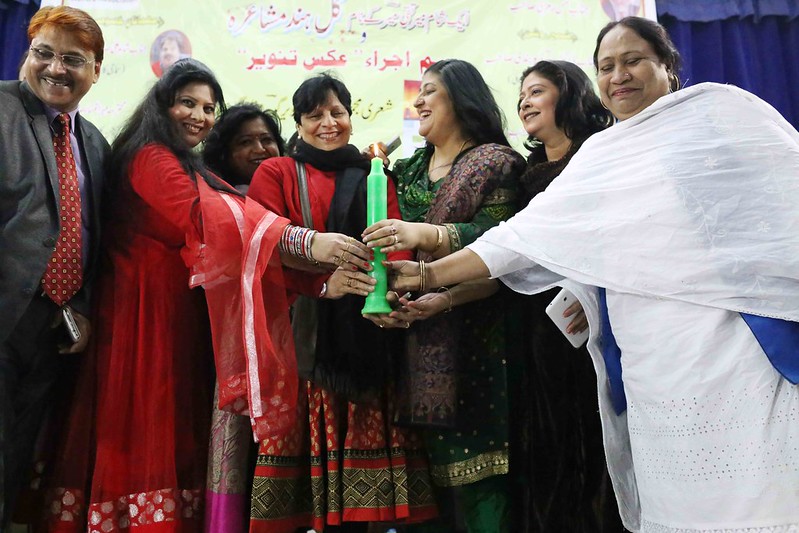 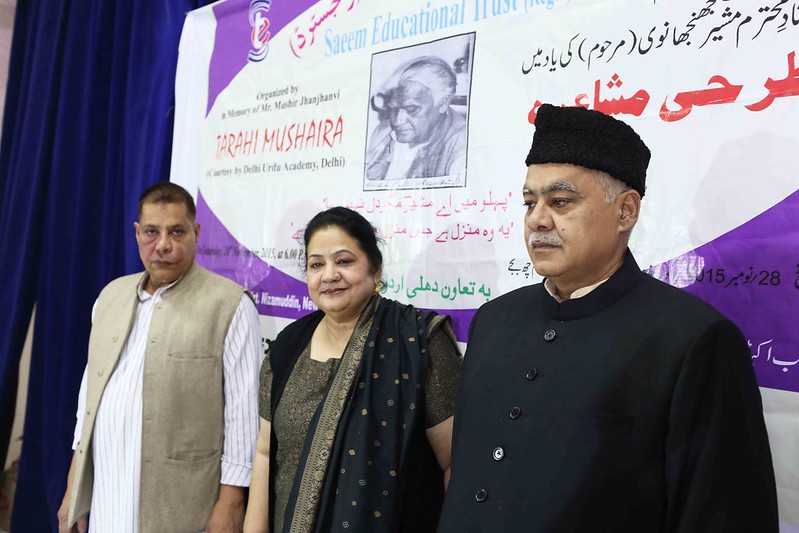 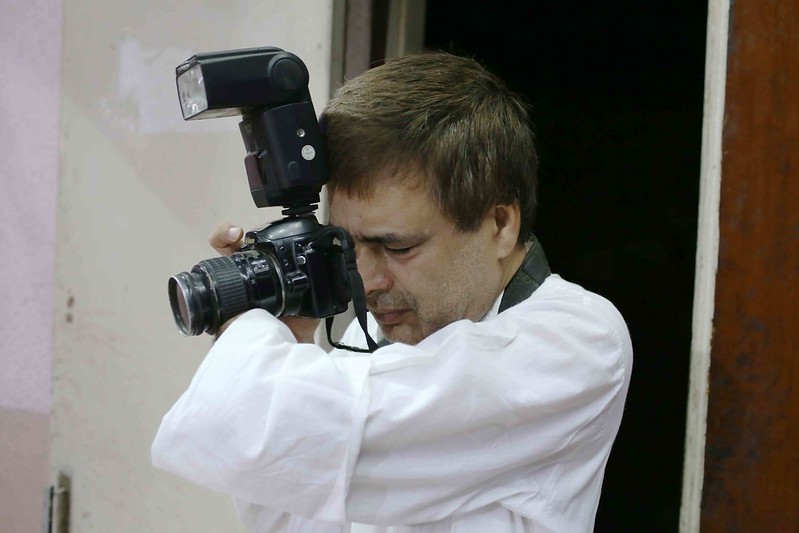 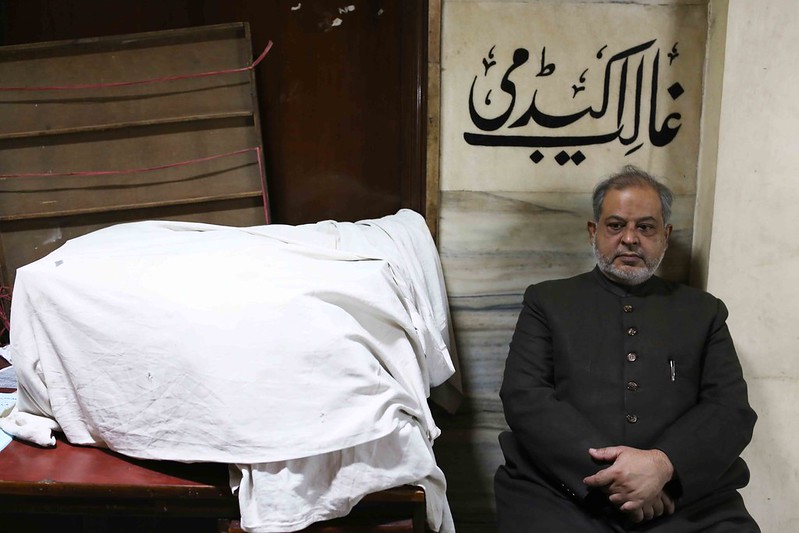 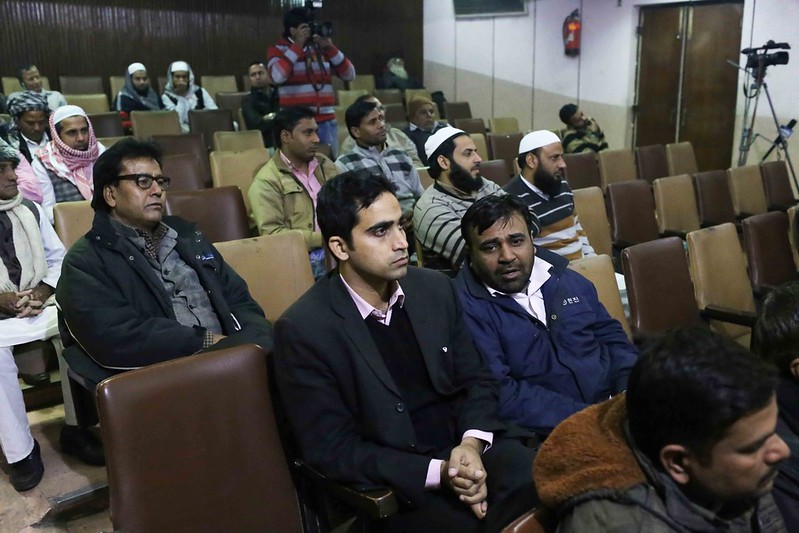 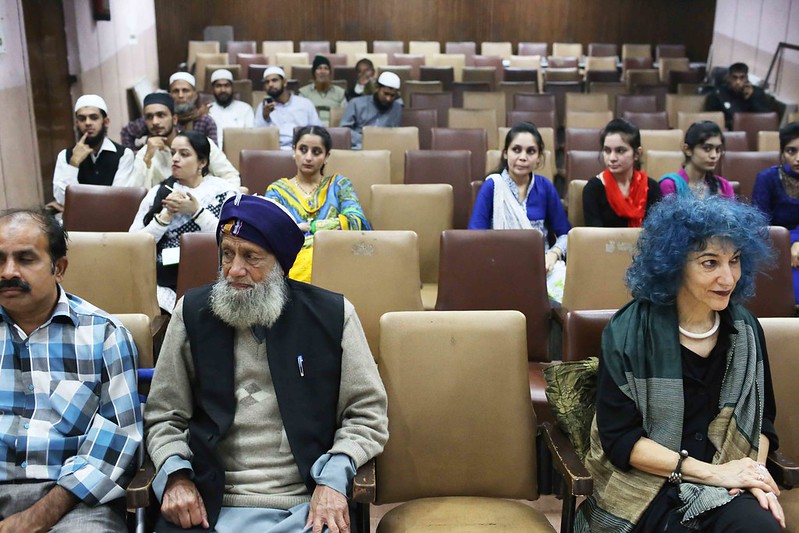 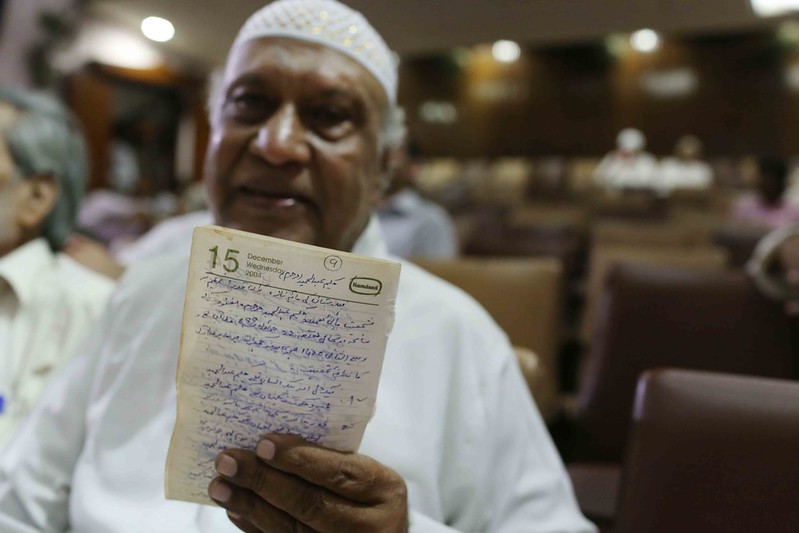 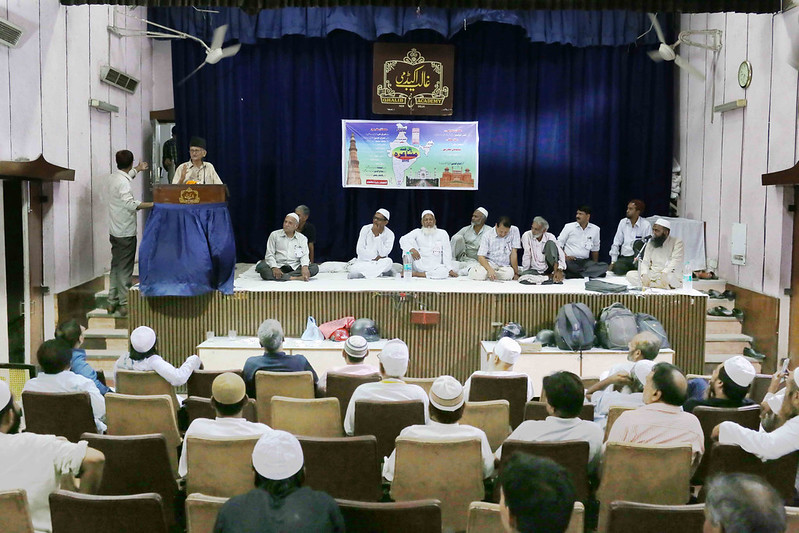 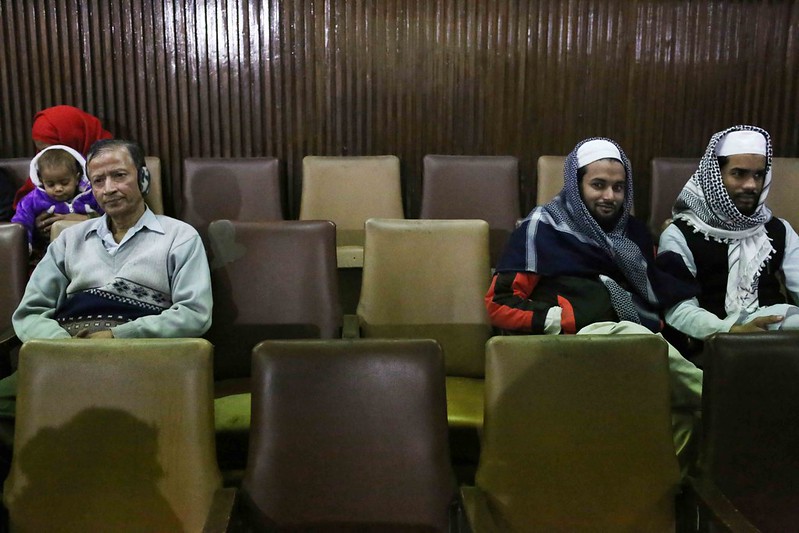 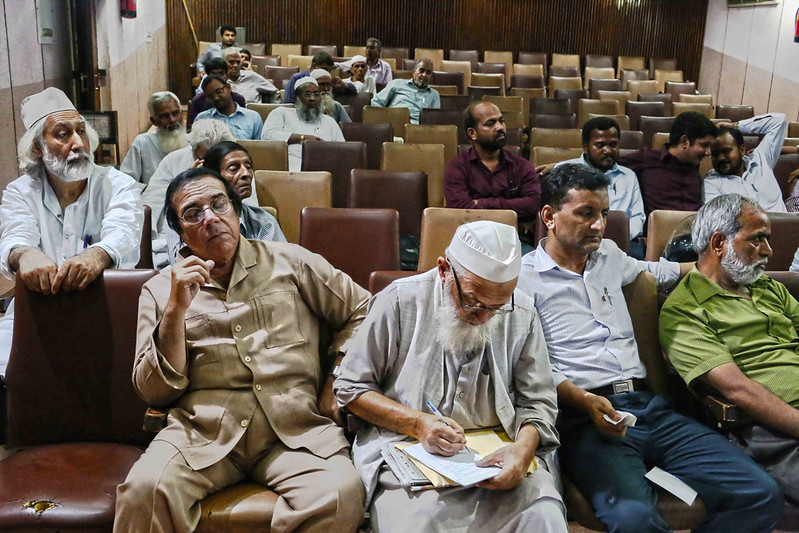 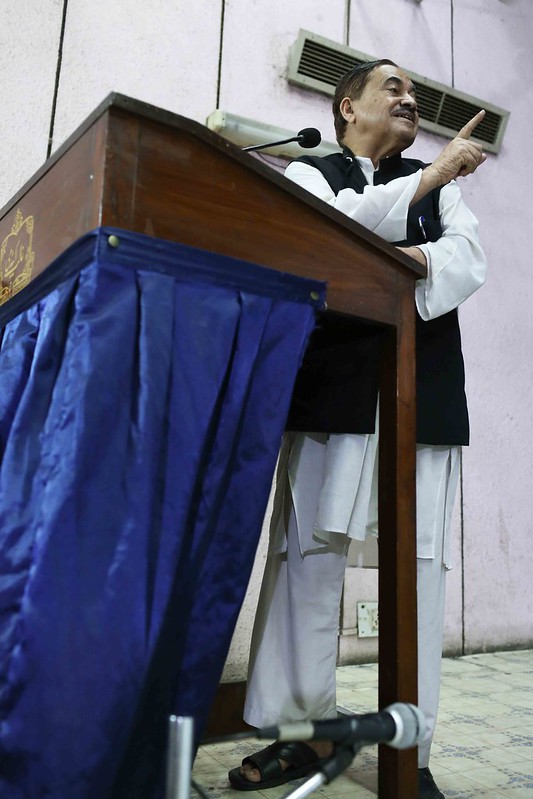 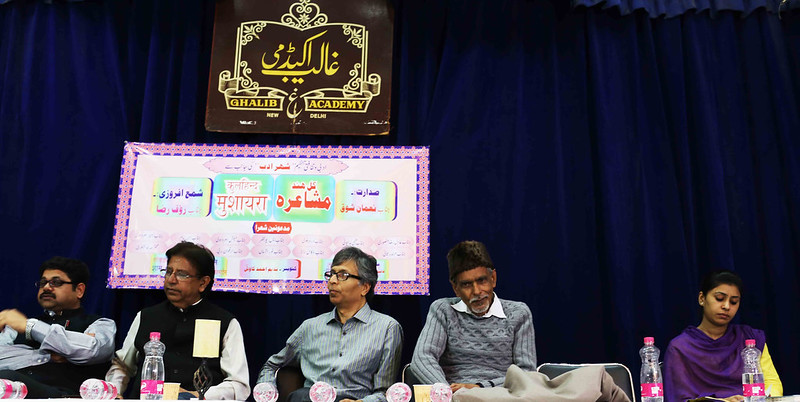 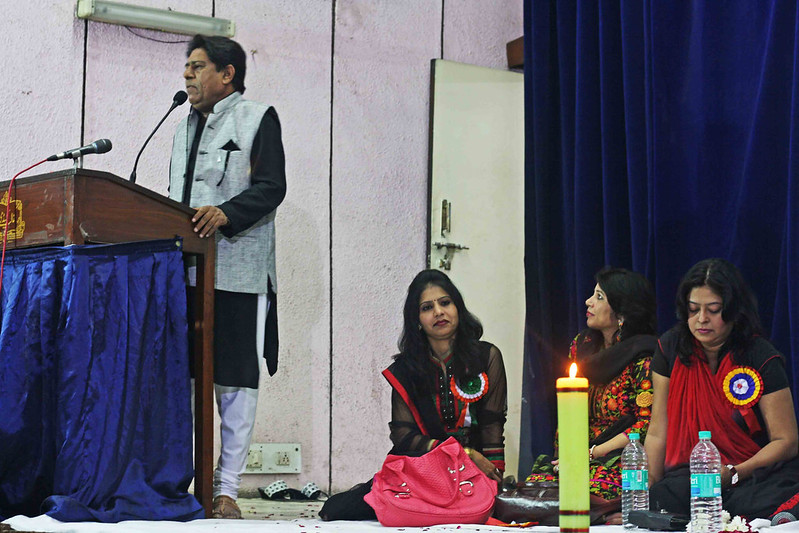 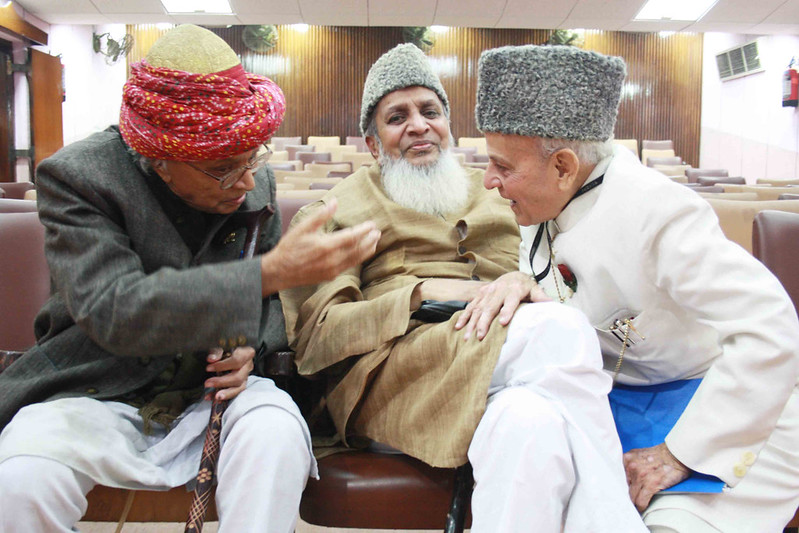 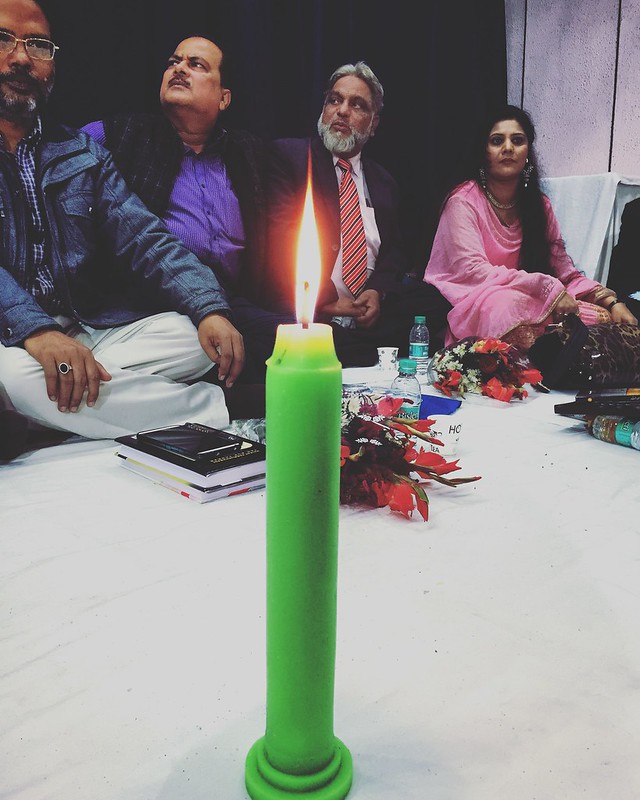 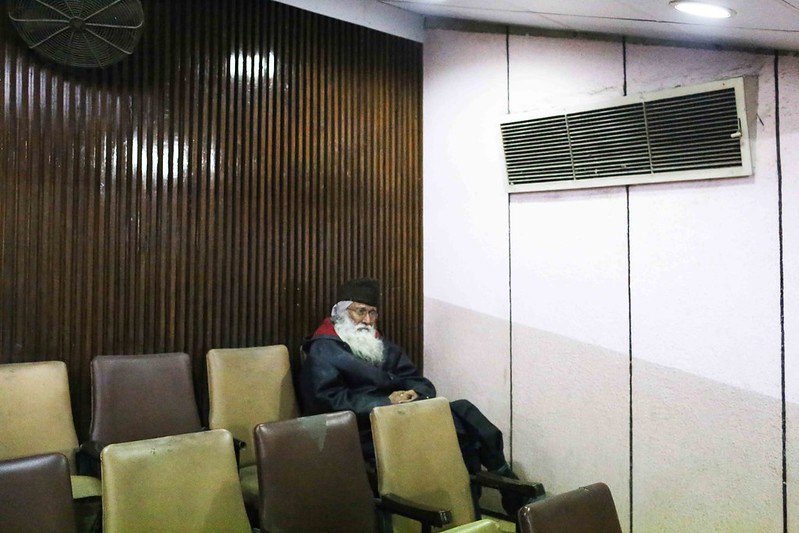