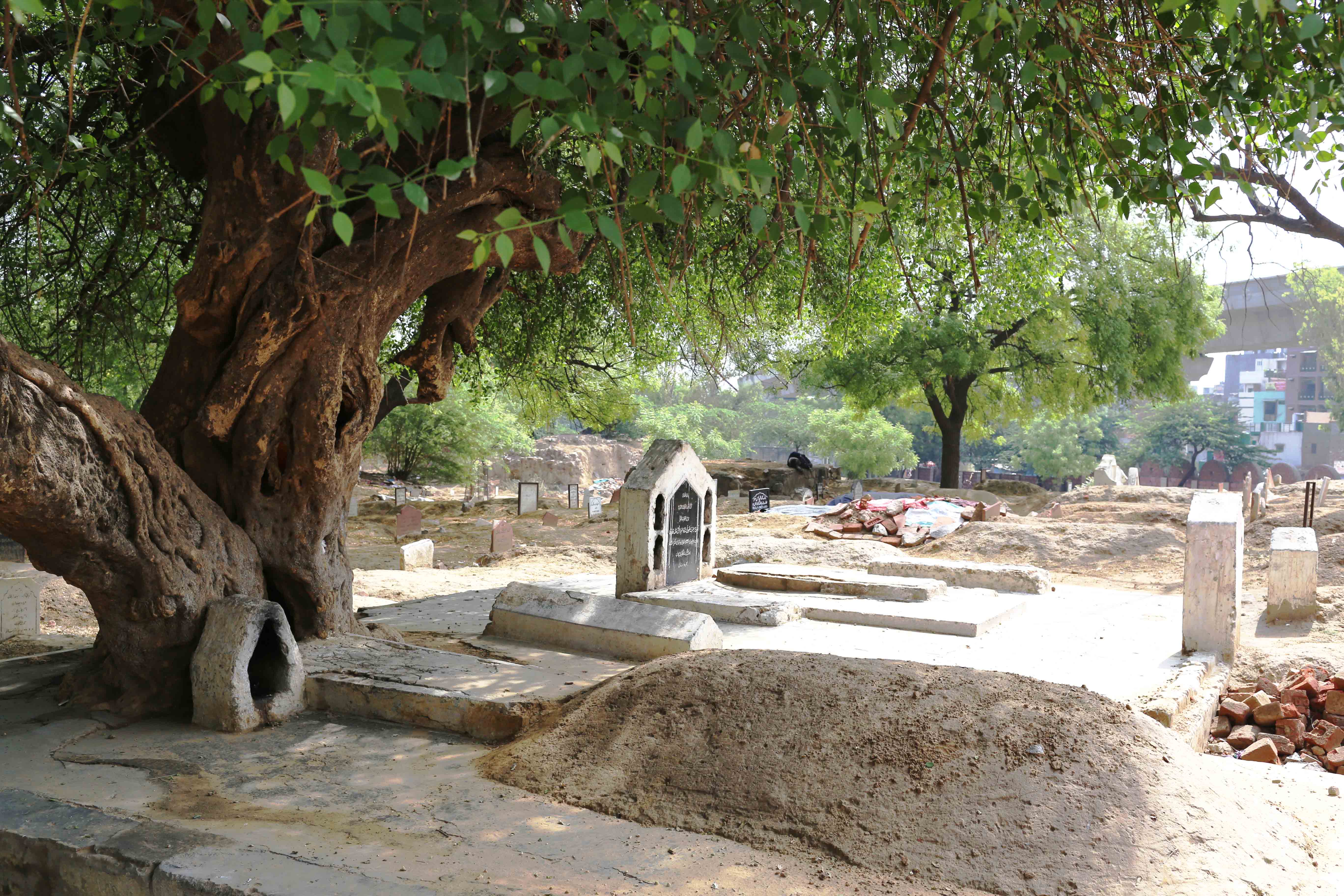 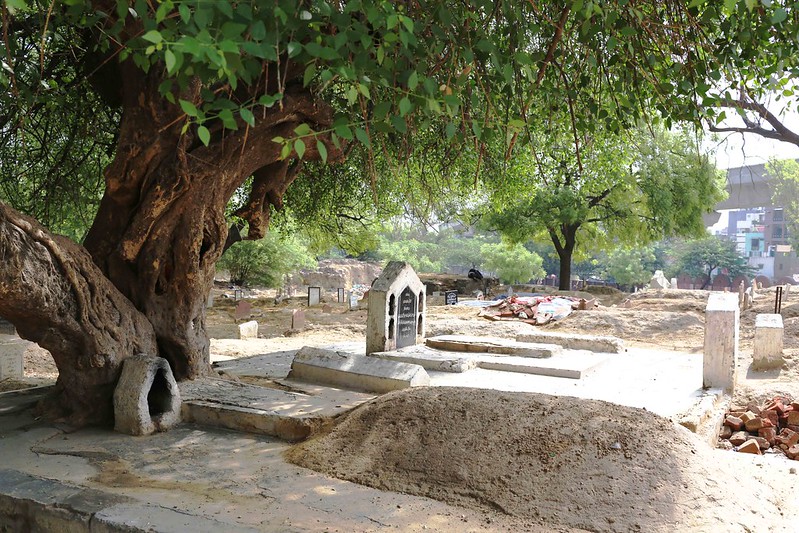 The definitive directory of great Delhiites.

He was always seen in a green kurta, this lean man with deep-set eyes and a long beard. Allah Hu was a gravedigger at the Batla House Qabristan in south Delhi. Over the last 40 years, he had dug or supervised the final resting place for thousands in this sprawling Muslim cemetery.

On 25 April 2016, he died of a heart attack—and was buried in the place he had selected for himself years ago.

At 85, Allah Hu had lived almost all his life in these dusty grounds, in a two-room house that is his only material bequest to his wife Khushnabi, four sons, two daughters, and 11 grandchildren.

The other legacy is his profession. His sons have followed him. The Delhi Walla met them on a recent afternoon; they were relatively free. The previous day had been busy. Five women had been interred, which meant that Allah Hu’s sons had had to work from morning till late night.

Seated on a string charpoy, Allah Hu’s younger son, Riazuddin, gazes absent-mindedly at the graveyard. The dusty brown sloping landscape is dotted with hundreds of graves. Only a few tombs have elaborate headstones. Most bear simple metal markers painted with names and professions. There are scores of neem trees—all said to have been planted by Allah Hu.

Goats lounge peacefully atop a few graves. No boundary demarcates the graveyard and the adjacent residential localities, though a wall separates the site from a busy road. The Jamia Millia Metro station is coming up there. The Jamia Millia Islamia campus is around the corner. Not surprisingly, there is a cluster of graves where some of the university’s faculty members lie buried—it is separated from the rest of the graveyard by a brick wall.

Of course, there are other Muslim graveyards in the city. Such as the Delhi Gate Qabristan, which is behind The Times Of India building on Bahadur Shah Zafar Marg. Central Delhi has the Panj Peeran Qabristan, next to the Lodhi Road crematorium.

South Delhi has a series of small cemeteries in Mehrauli. There is also a graveyard in Chirag Delhi. But Batla House, which sprawls over 20 bighas, or around 5 acres, is the largest in this part of the city. It’s the final resting place for residents of nearby areas such as Sarita Vihar, Bhogal, Zakir Nagar Extension and Okhla Mandi.

The last time Allah Hu himself dug a grave was in April 2015. By then, he had become too frail to wield a shovel. And no wonder. As Riazuddin points out, it’s hard work. “The gor-kan (gravedigger) needs four types of equipment—gaiti, phavra, kassi and khurpa,” he says, adding, “Sometimes, you find stones under the ground, and then you need a hathodi to break them.”

The standard charge for preparing a grave is 3,500 rupees. Until a decade ago, 4 hours were sufficient to finish the task. Now, however, it takes far longer, because every inch of the graveyard has been utilized. These days, new graves are built upon the old. The diggers often stumble upon skeletons, which are subsequently reburied deeper down. Riazuddin says at least six people have been interred in a grave.

Allah Hu used to dig each grave himself. When he grew older, his sons started giving him a hand. Much later, Allah Hu also hired “labour”, common-speak for the daily-wage construction workers available every morning at the nearby “labour chowk” in Okhla. Some of them lose their nerve when they come across remains of the dead.

A few days ago, says Riazuddin, a hired labourer came across some remains while working the pickaxe. He was so terrified that he fled, not even waiting for payment. Riazuddin says that if a body is shrouded in terrycloth, the decomposed parts remain inside the cloth, because the synthetic fabric does not disintegrate easily, unlike cotton shrouds.

Skeletal remains, however, don’t disturb Allah Hu’s family in the least. His other son, Shakeel, says nobody in his household has ever been scared of living in the graveyard.

“We all have spent our lives here since we were born,” he says. “We don’t feel anything if we come across a skull while at work. It’s normal.”

The sons say their father came to Delhi as a young man from Piplauti village in western Uttar Pradesh. At the time, he was known only by his original name, Bundoo Shah. The remainder of his biography is sketchy. Even so, one can discern the main points.

Allah Hu began life in the Capital by settling down in a corner of this cemetery. Every day, just before evening prayers, he would walk around the neighbourhood, alerting believers by beating a drum called taasa and continually reciting the Shahada, the Muslim statement of faith. He would end each exhortation with Allah Hu—eventually, he came to be known by this “Hail God” chant.

At some point, an eminent landlord of the area, Noor Nambardar, from whom the nearby Noor Nagar gets its name, appointed Allah Hu as the cemetery’s first gravedigger. Among the first things he is said to have done was to prepare a grave, under a giant peelu tree, where he would eventually be laid to rest. He used to spend a few hours there every day, eyes closed.

Allah Hu had ascetic habits. He ate only roti and subzi, and rarely entered his house, preferring the shelter of a neem tree outside. A calm temperament added to his stature. People would seek his help in warding off illnesses. He was respected by all, with occasionally cruel exceptions—once, an acquaintance lied to him about a sudden death, and Allah Hu immediately set to work, only to discover that he was at the receiving end of a joke.

Allah Hu’s family has two photographs of him. A black and white portrait, in which he is seated cross-legged, holding a beaded necklace—resembling one of those fakirs seen outside Sufi shrines. A colour photo has him standing beside Rajiv Gandhi. The former prime minister was visiting a friend’s grave at Batla House. Rajiv Gandhi died two-three days later, says Riazuddin.

In August 2007, I was searching for author Qurratulain Hyder’s grave at this graveyard. An elderly man in a green kurta and green turban was digging a grave. He was drenched in sweat. His work was almost complete. A perfect rectangle was ready, the sides supported by wooden beams to prevent a collapse. The man did not utter a single word in response to enquiries about a writer who had been buried there a week earlier. In any case, I took his photograph.

That’s the only known picture (see last photo below) of Allah Hu in a grave he had just finished digging.

Memories of the gravedigger 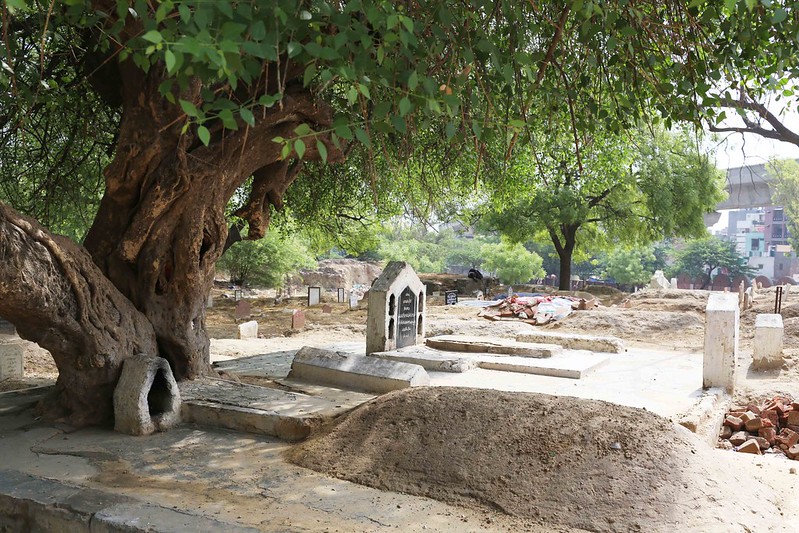 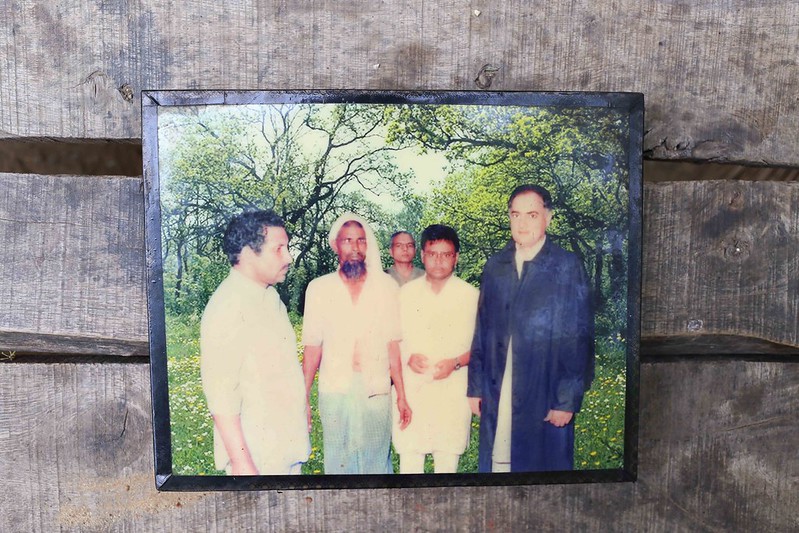 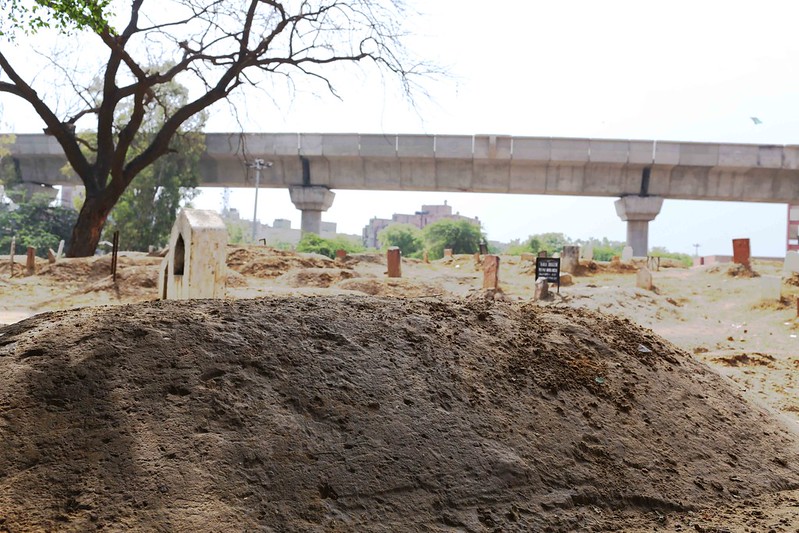 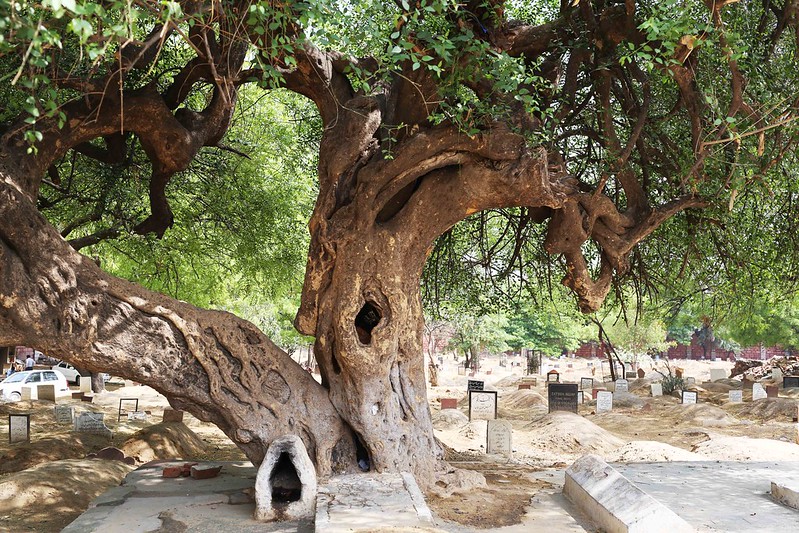 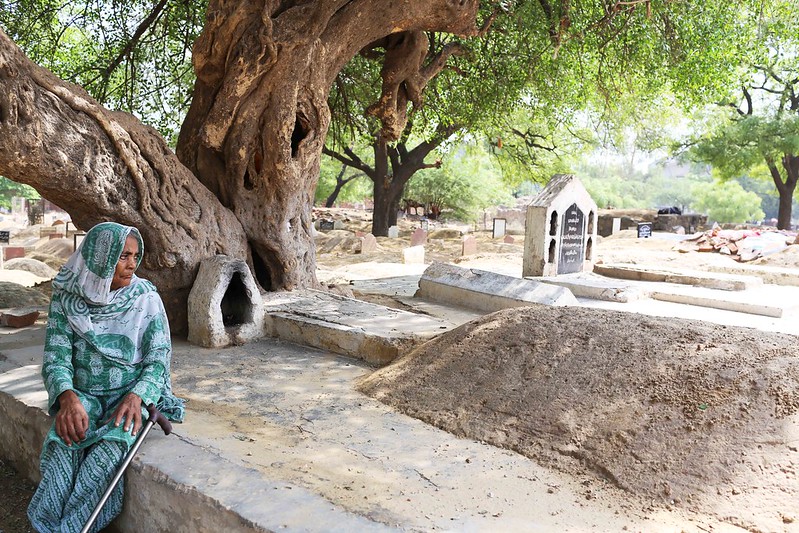 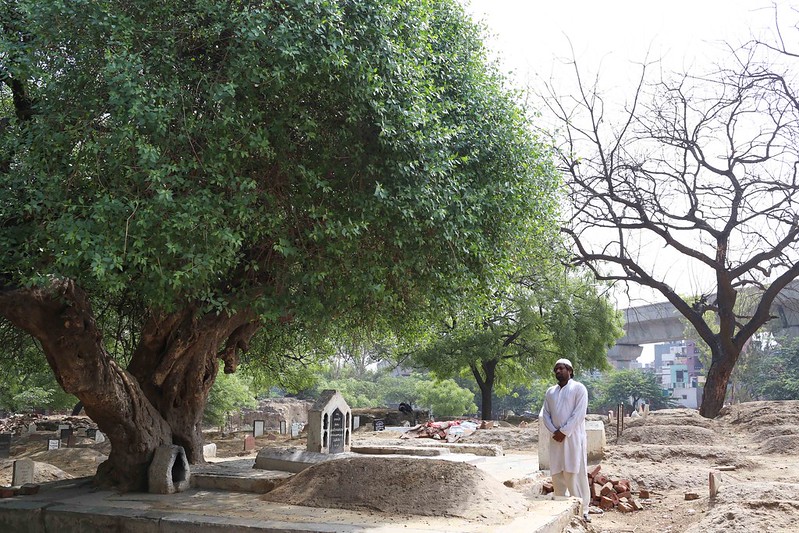 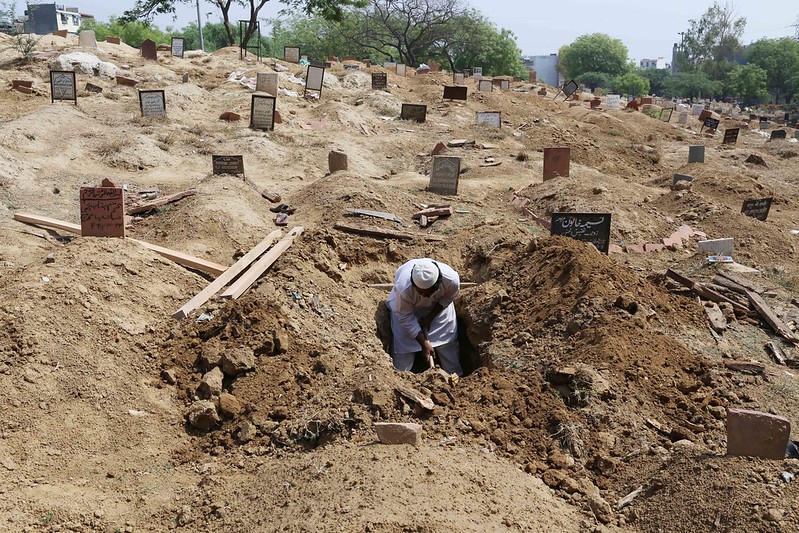 8. (a grave in Batla House Qabristan) 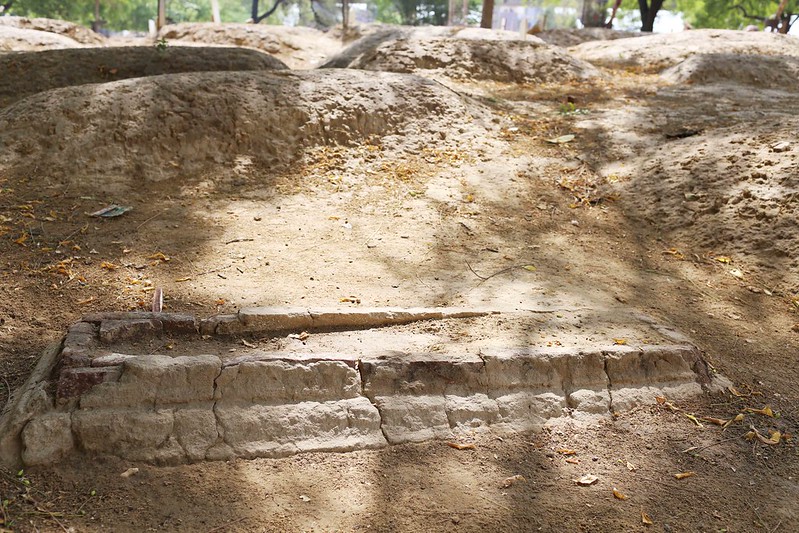 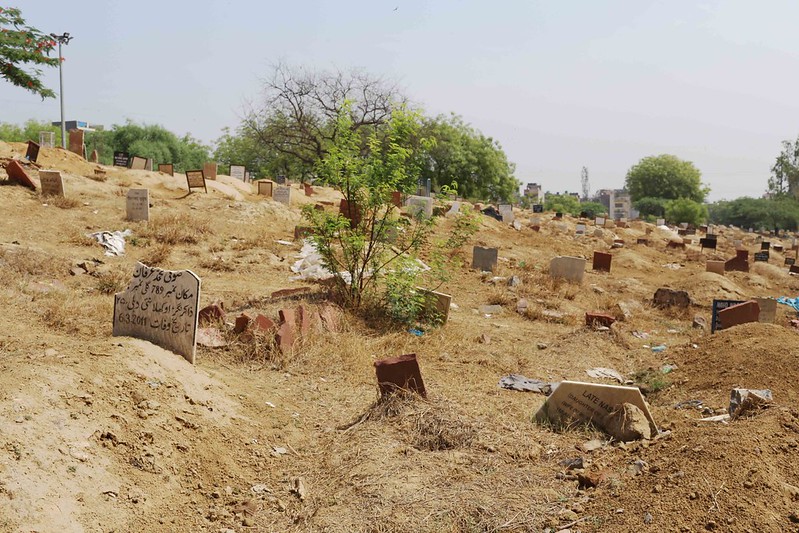 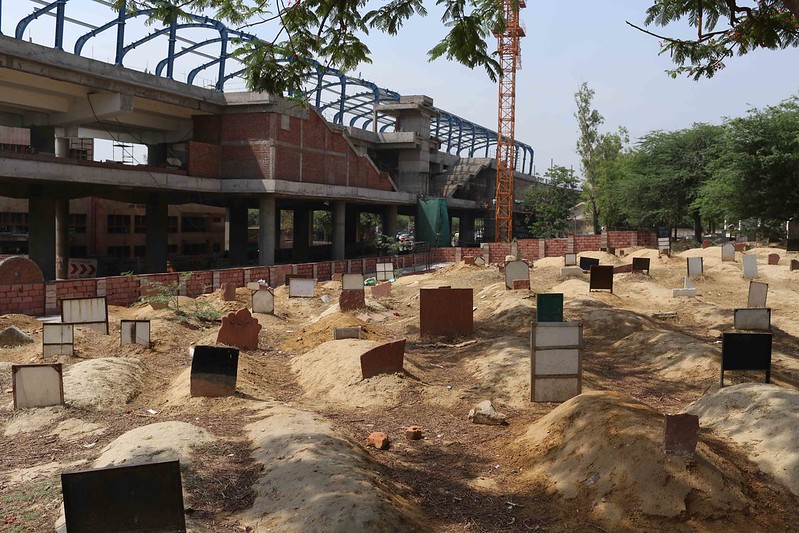 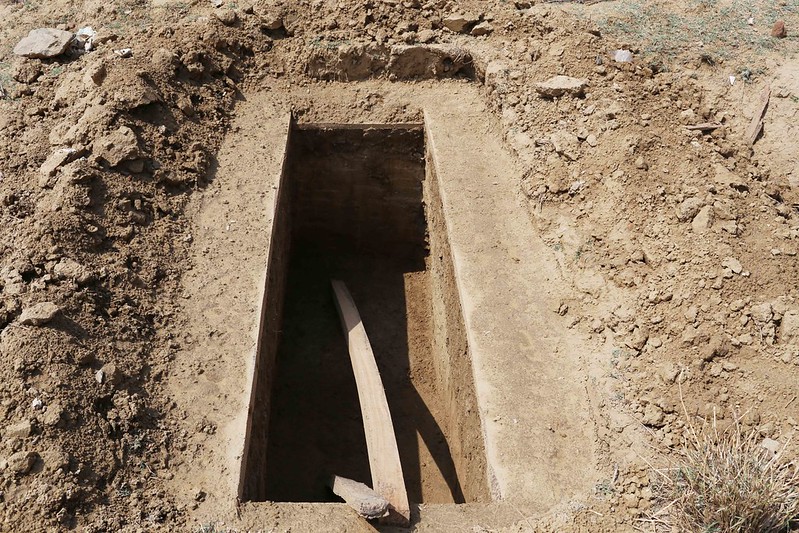 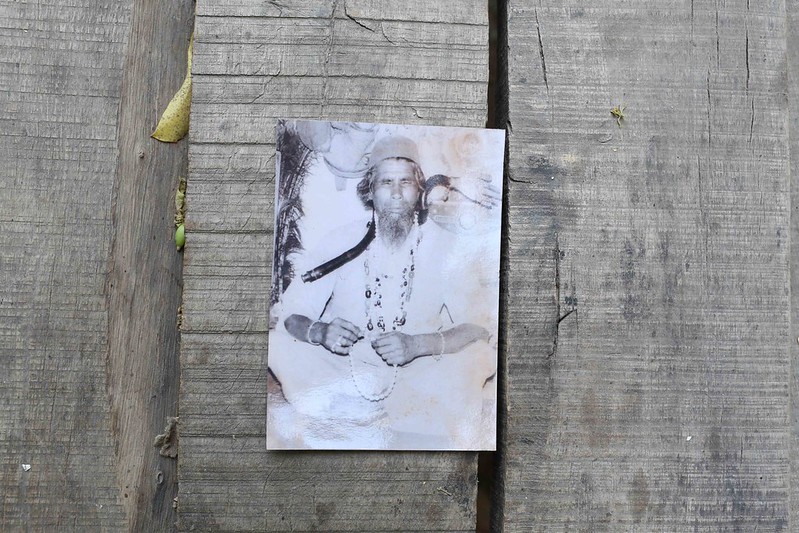 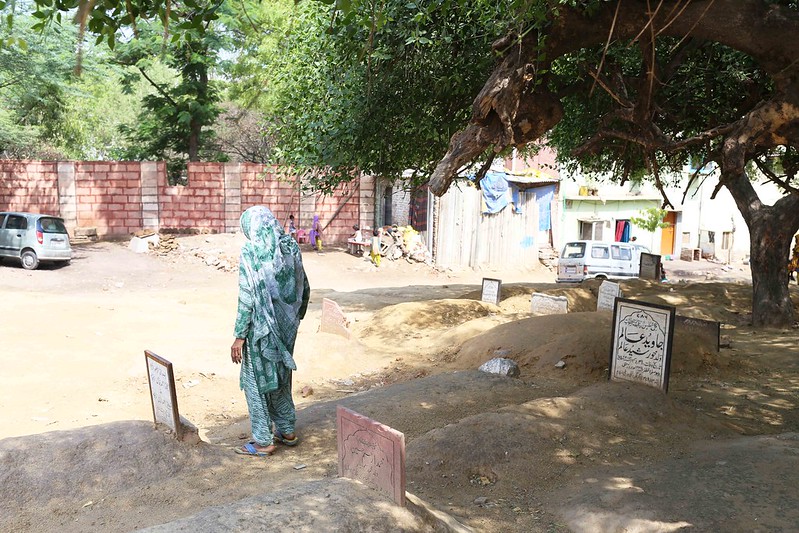 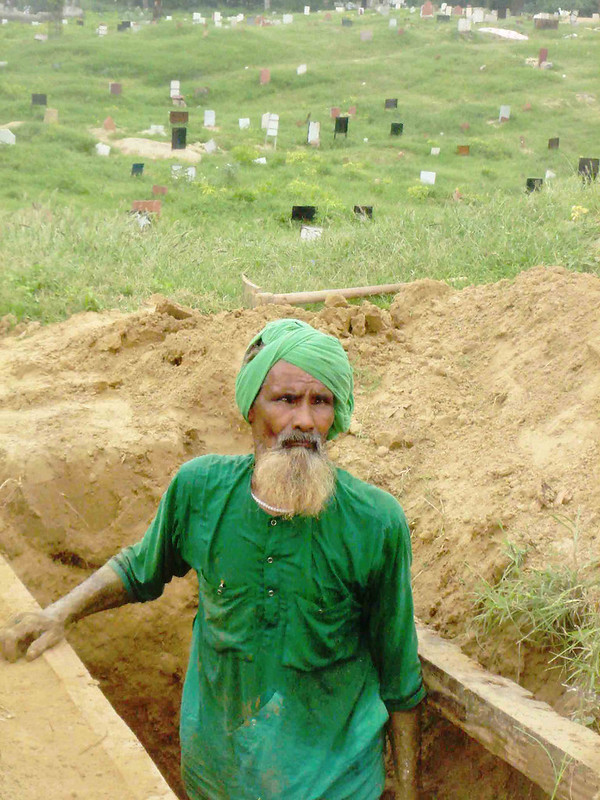