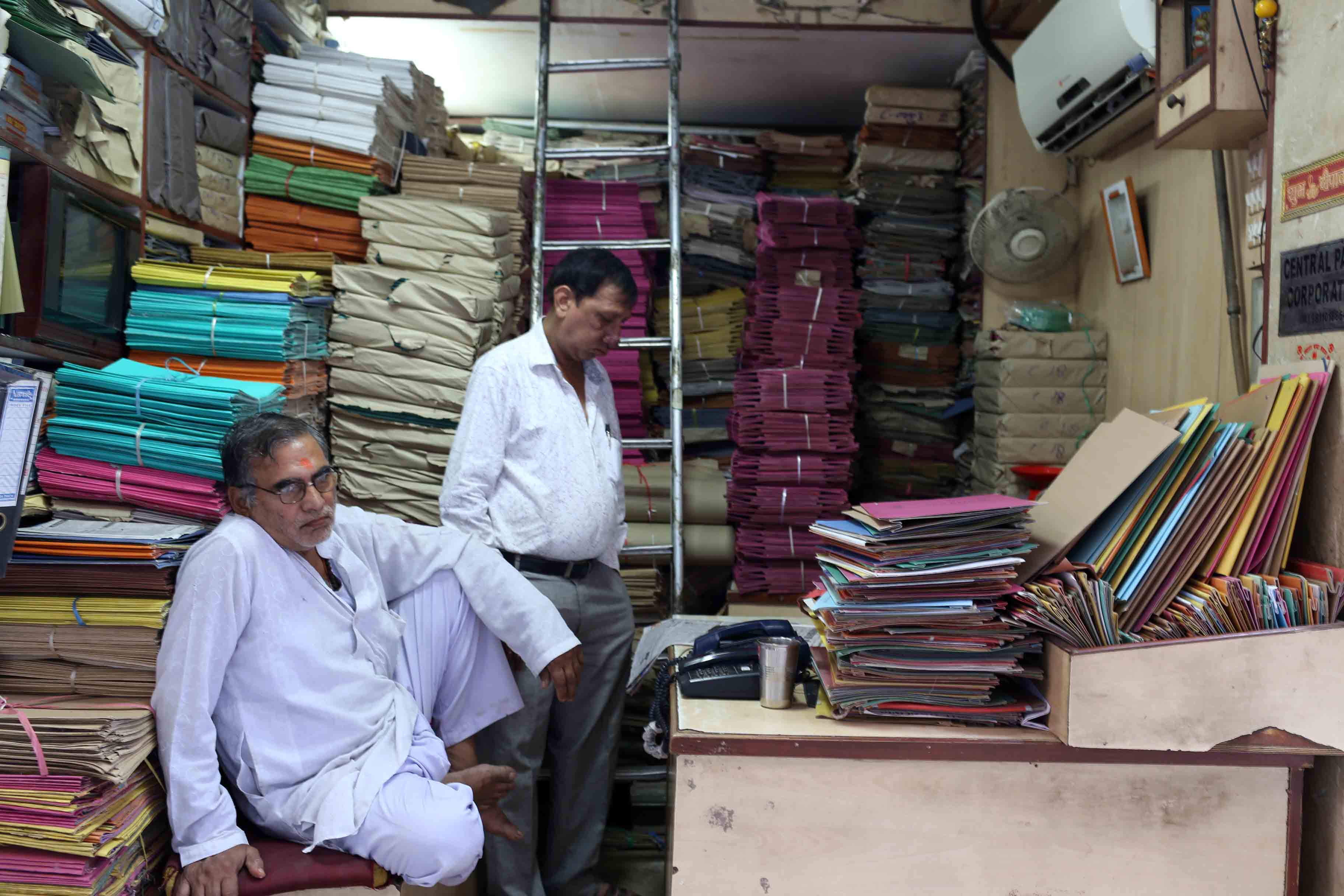 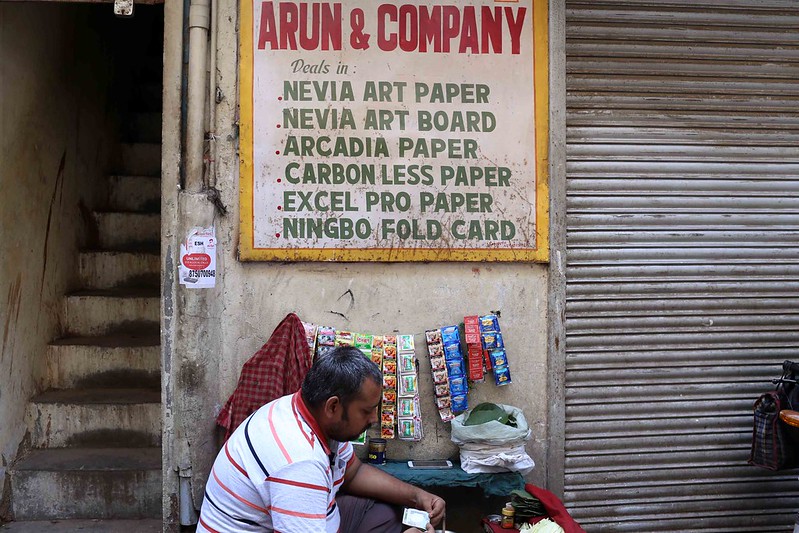 Is the modern world really paperless? Some of us hope that we get there soon–it’d be good not to kill trees just so that lackadaisical office employees can generate mountains of pointless printouts. But such thoughts are wiped clean from the mind when you travel through Old Delhi’s extraordinary wholesale paper market.

Streets are littered with paper shaving. Staff in cramped stores are dwarfed by bundles of paper sheets. The air hums with the drone of paper-cutting machines. The storefronts advertise paper types you might never have heard of: silicon paper, release paper, thermal paper, poly paper, metalized paper and even waste paper.

Out here, paper rules and humans are its slave–sweating laborers hobble along the narrow lanes with weighty stacks of paper sheets on their back.

At first impression, the paper market, with its two thousand big and small establishments, seems to be a self-sustained ecosystem, functioning in total isolation from the rest of the smart world that says e-readers are better than books. But that’s an illusion. Our new habit of reading digitized novels and sending party invites on Facebook has directly affected this place. The concerns of the traders here aren’t unlike those of the Finnish premier, who said in 2014 that the arrival of the smart slate wounded his country’s paper industry.

“We are running India’s biggest wholesale paper market, but our business has gone down by 30 per cent in the past five years,” says Gian Prakash Gupta, president of the Paper Merchants’ Associations, Delhi. He is sitting in his dark squarish store, half of which is filled with paper bundles from floor to ceiling. Mr Gupta is not only mildly resentful with the “increasing tendency to store books in pan (sic) drives” but also about the general perception that paper leads to pollution. “Most [of the] paper you find in this paper market is made of raddi (discarded paper). We are not chopping trees to make paper,” says the associations’s chief.

Mr Gupta’s business is tucked inside a dark gallery. The alley outside has the most scenic stores, the kind that one comes across in those rare Delhi photo spreads in the old yellowing issues of National Geographic magazine. No furniture clutters up these shops. Instead, a white sheet covers the entire floor and the walls are decked with portraits of gods and dead ancestors. The paper sheets are stacked deeper inside.

Further down the alley is an open urinal, just above which is a hoarding for ‘non-woven paper bags’. The lane ends in a swarming thoroughfare. Walk up to that and you face the western wall of Jama Masjid.

The paper market is in Delhi’s former red light district. In the age of the Mughals, Chawri Bazar was home to the celebrated dancing girls Nur Bai, Kali Ganga, Zeenat Behji and Ad Begum, the woman who would notoriously appear without her pajamas but with legs painted in elaborate designs. The British moved the prostitutes to nearby GB Road, and Chawri Bazaar evolved into a deliciously chaotic mess of overlapping worlds. It’s a market for building materials, and it also has a dedicated wedding cards market. Of course, you might have come here to treat yourself to Delhi’s best bedmi poori (Shyam sweets), or perhaps to the city’s most marvelously improvised fruit sandwich (Jain Coffee House). Chawri Bazaar is also home to one of the city’s most beautiful Mughal-era mosques–Masjid Rukn ud Daula sits atop shops selling aluminum and copper rods.

To many visitors who flock to the pleasures of the Walled City, the Chawri Bazaar experience is limited to a quick rickshaw ride from its underground metro station to the famous Karim’s restaurant in Matia Mahal Bazaar. No way can they see the paper market. Hidden within a mesh of narrow lanes, the market is entangled in localities with poetic names such as Gali Charkhiwalli, Kucha Meer Aashiq and Gali Batashe Wali.

If anyone does make the effort to find the paper market, they’d take back a memorable piece of Old Delhi. Besides the paper shops and paper godowns, there’s the meditative sight of lungi-clad men quietly and rhythmically working old paper-cutting machines, turning large sheets into manageable rectangles in their hole-in-the-wall workshops that operate next to old buildings. You’d watch in rapt concentration until a laborer asks you to move out of the way.

The office of the Paper Merchants’ Associations is vastly more posh than one might expect. It’s a beautifully maintained building, with a sprawling courtyard so loungey and atmospheric that you might want Khan Market cafes to shift here en masse. The conference hall has a large table, which isn’t big enough to accommodate all the 1,600 members of the association. The Delhi Walla also spotted two computers—must be an alarming sight for a paper trader.

Not confined to one district alone, Delhi’s paper trade has a few other smaller centers in areas such as Kotla Mubarakpur, Green Park, Raja Garden and Shahahdra. A few years ago, Chawri Bazaar was set to lose its paper market. In 2006, the association accepted a government offer to leave the congested alleys for faraway Ghazipur. Six hundred plots were sold by the Delhi Development Authority to the paper merchants. A few did shift their business, but eventually they all returned. “Until now, that place has no power, no sewerage system, no security… how can we then run our business?” says Gupta.

As a result, a part of Old Delhi remains papery. You can actually draw a map of the Walled City dividing it into regions after their specialized trades. Naya Bazar for foodgrains; Khari Baoli for spices and dry fruits; clothes in Chandni Chowk; motor and auto parts in Kashmere Gate; Dariba Kalan for jewelry; electrical equipment in Baghirathi Palace. In his 1988 book Local Finance in Metropolitan Cities: A Study of Delhi, academic Gangadhar Jha ascribed the rise of specialized trades in the city to the Partition–“Delhi assumed the role of a major distribution center for north and north-west India because Lahore, the other major trading center then, ceded from India.”

Now, as the world gradually breaks its ties with paper, the market’s long-term future is uncertain. At the moment, however, the wheels are turning somewhat smoothly. The supply and demand cycle continues. Papers, arriving from factories in Orissa, Punjab and western Uttar Pradesh, are processed into different kinds of sheets, and then sold to stationery makers and publishers. The business also (barely) supports the livelihood of about 500 migrant laborers. Mostly from Bihar and West Bengal, their daily job is to haul the load from trucks to shops—at night they sleep outside in the lanes.

Muhammed Sabir, a ‘paper mazdoor’ as he describes himself, is sitting outside Raghu Papers. An illiterate laborer, he has been working in the paper market for 30 years. “I used to make 20 chakkar (rounds) daily carrying the load from trucks to shops,” he says, “but these days, it is ten, when you are lucky.” Mr Sabir says he gets paid ten rupees for every round.

Mr Gupta, the paper trader and head of the association, believes that the market will remain commercially viable for two more decades at least, after which he envisages a paperless world.

What will he do then?

The place for paper 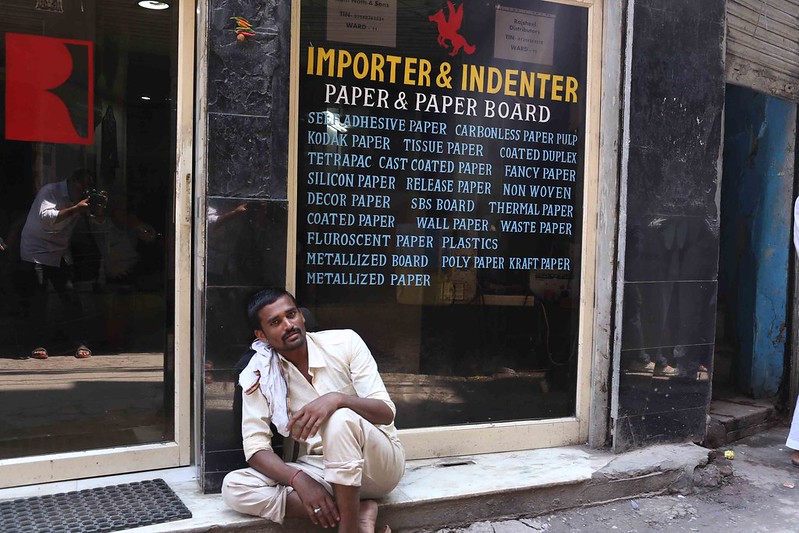 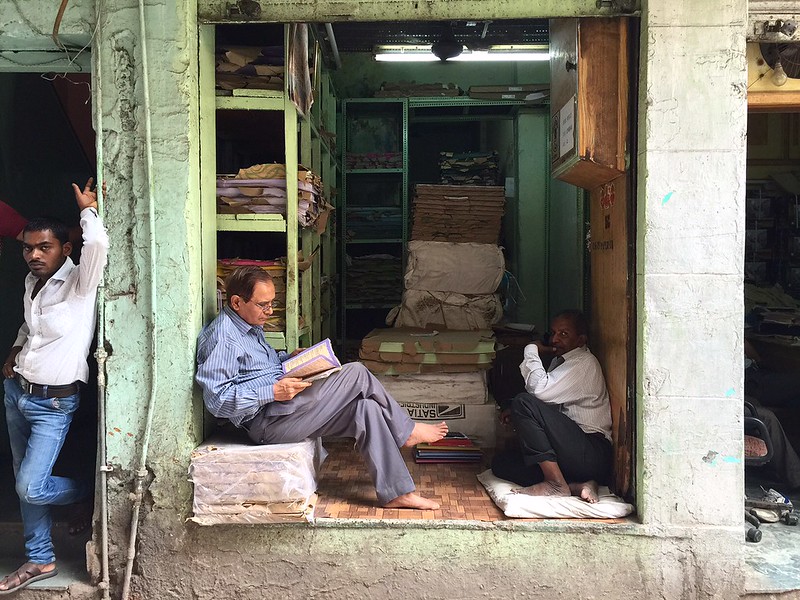 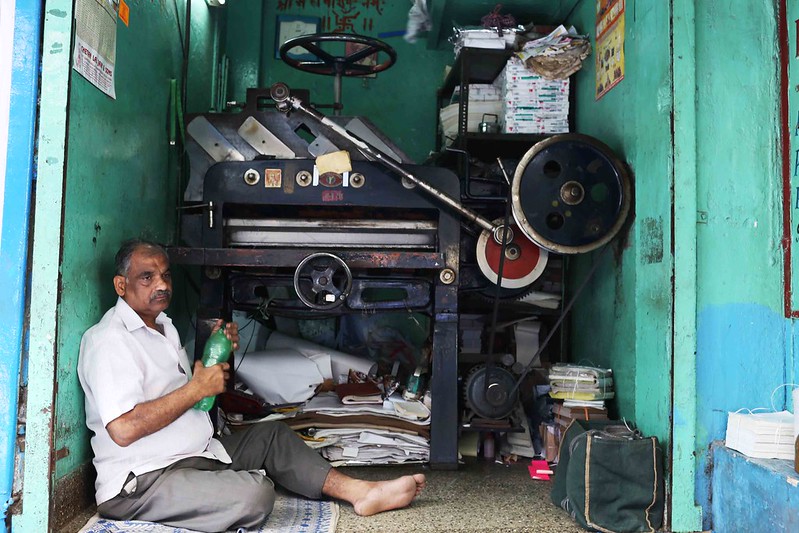 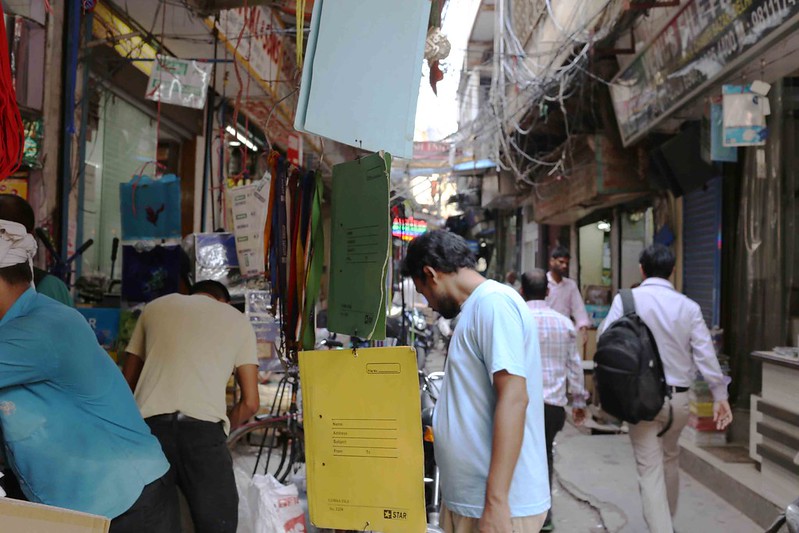 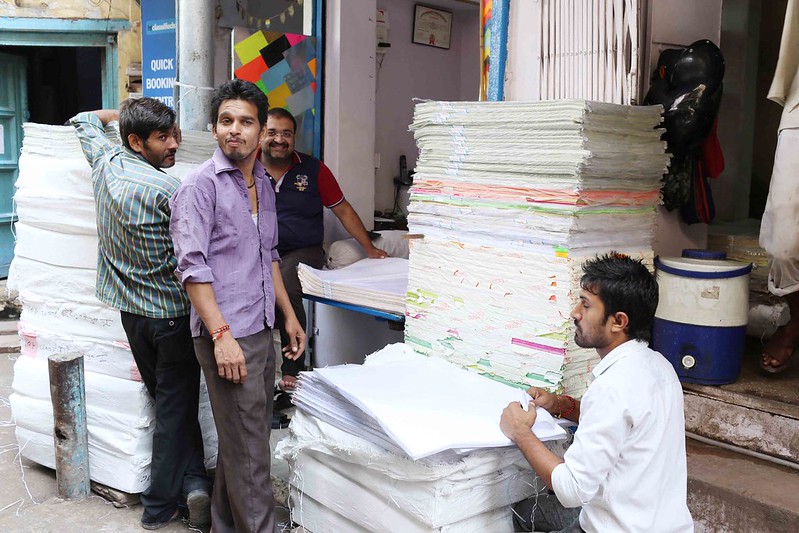 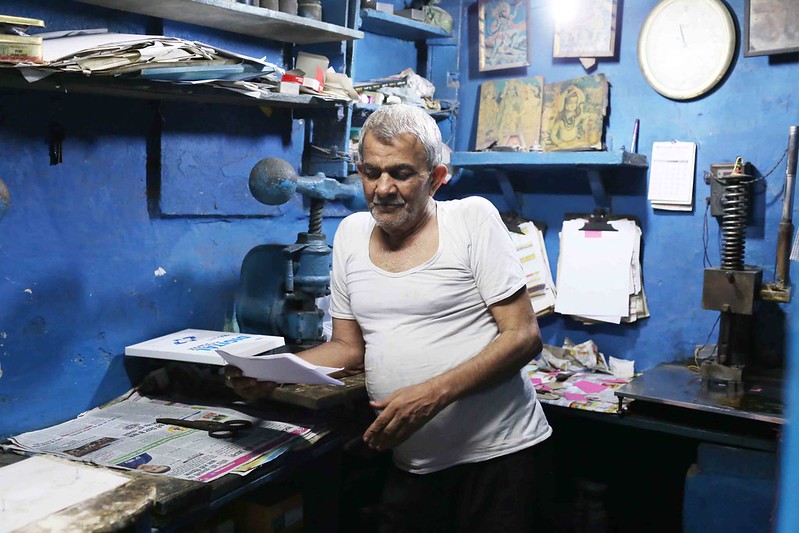 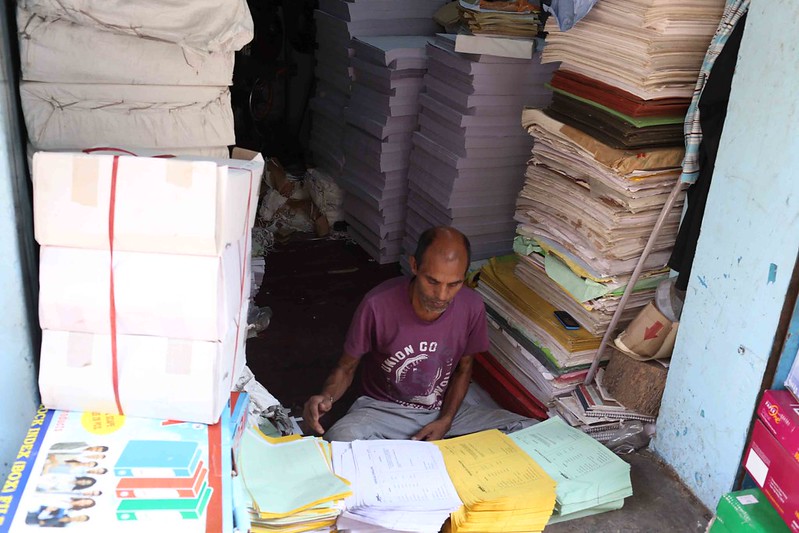 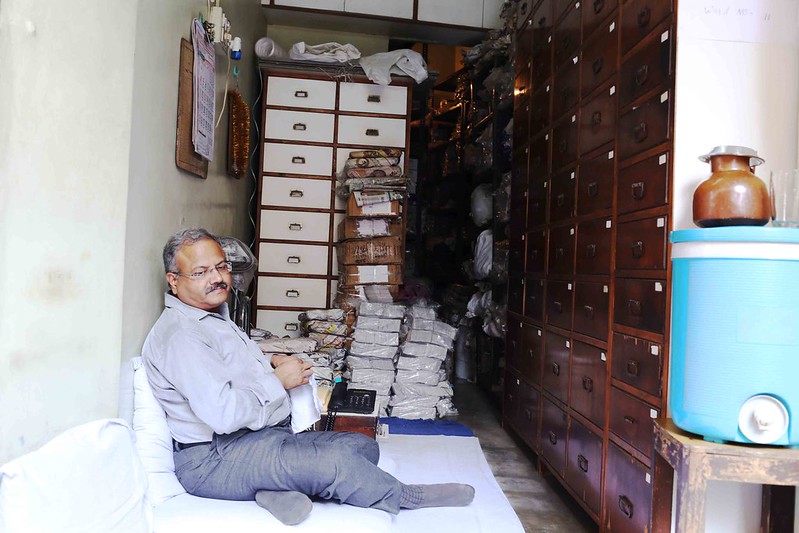 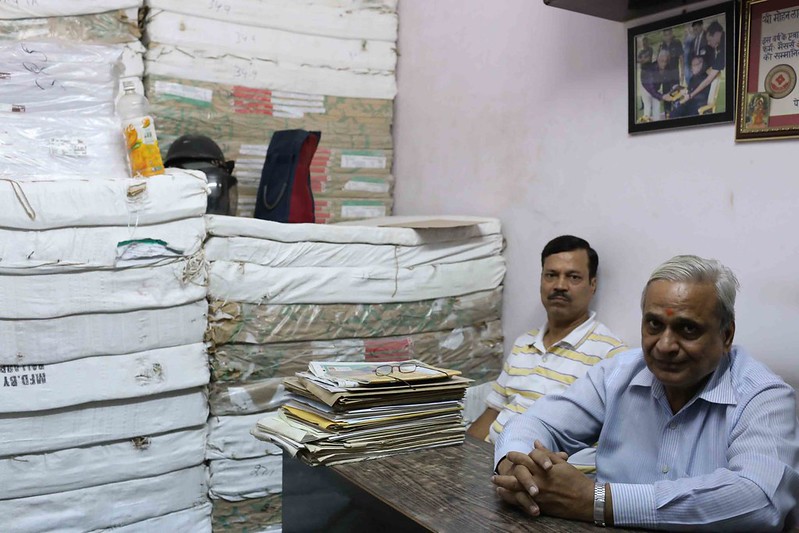 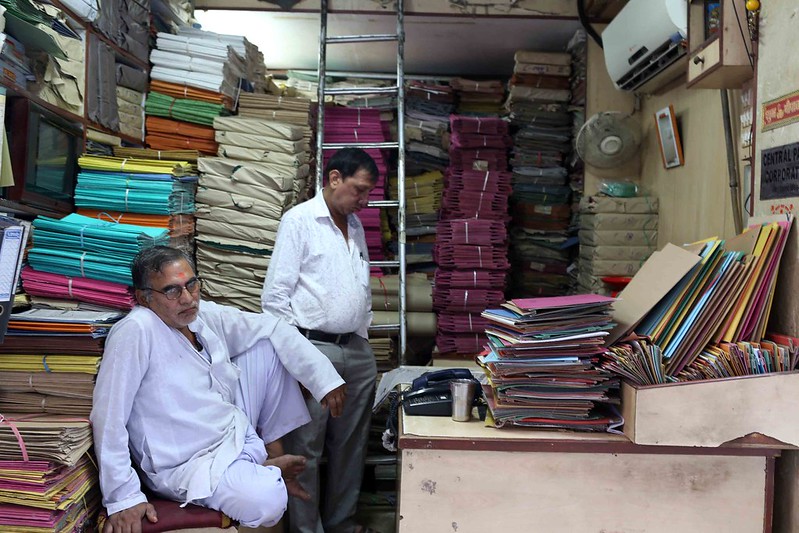 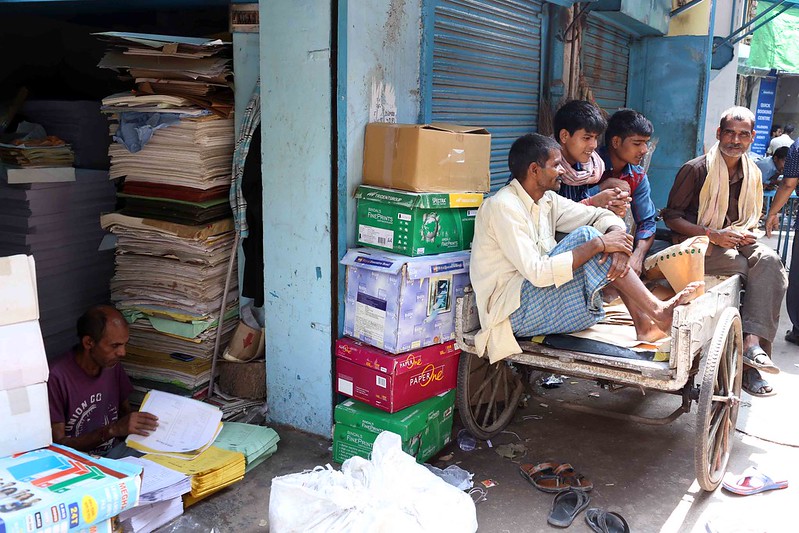 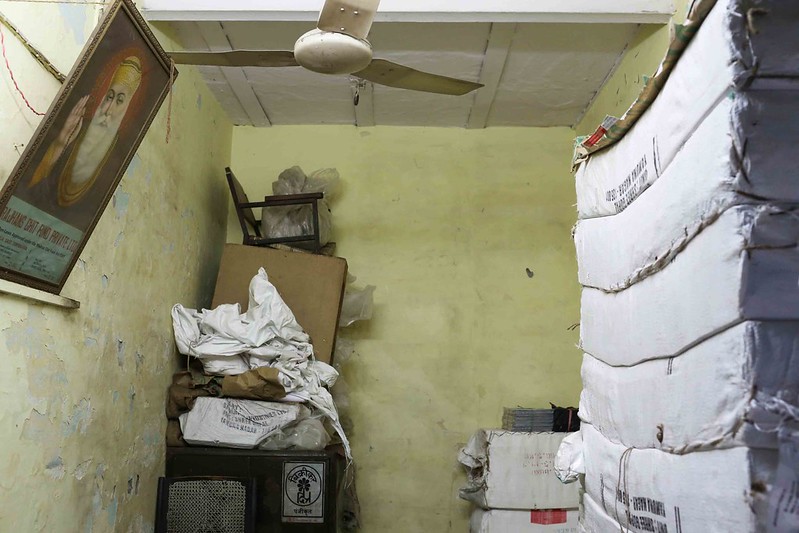 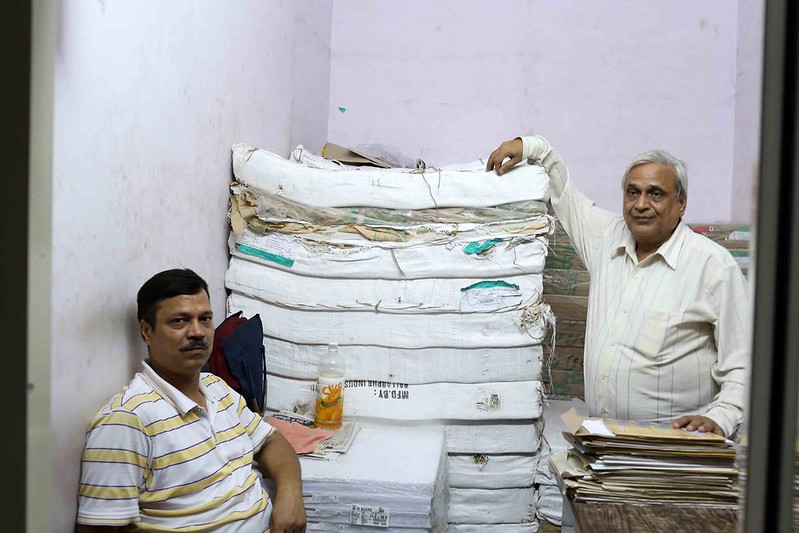 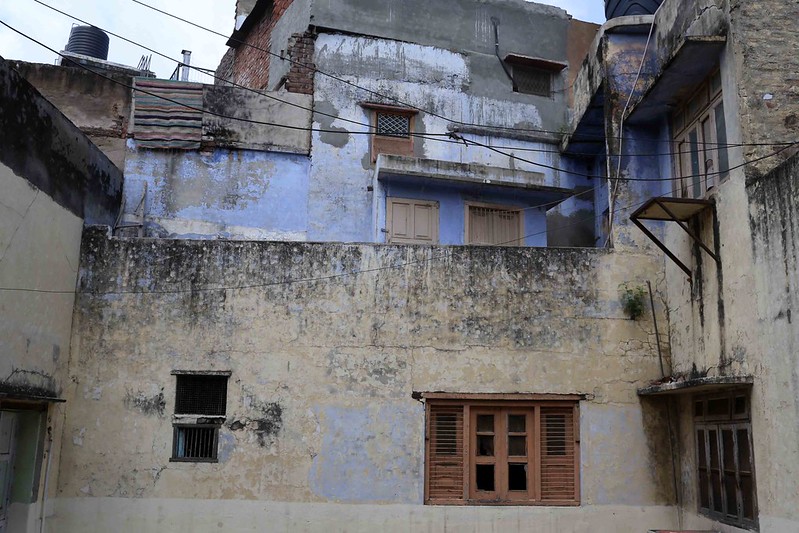 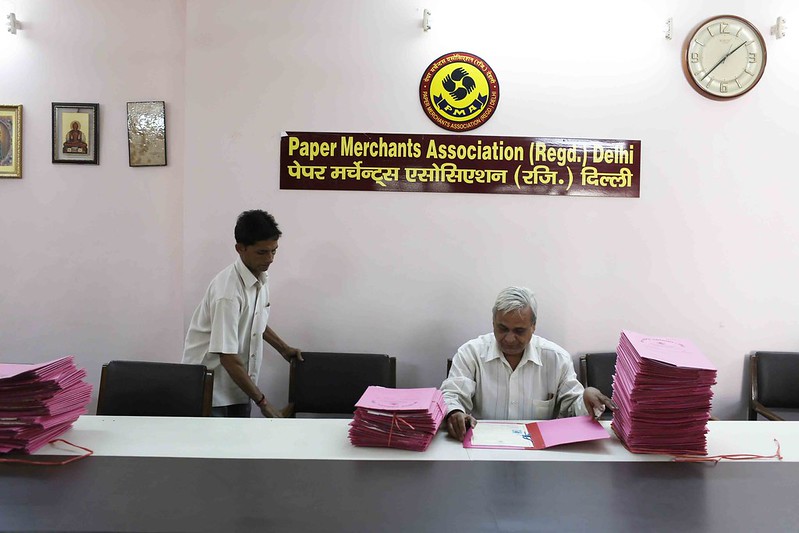